Comacina, a quiet, pleasant island in Lake Como, holds one of Italy’s lesser-known treasures:  Locanda dell’Isola Comacina. At this unique restaurant, I enjoyed one of the memorable meals of my life. The restaurant, open six days a week, and closed November 1-March 1, has no menu.  Guests are served the same meal every time, unchanged since 1947. 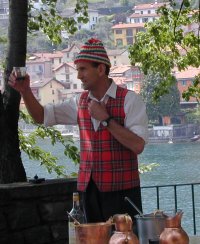 John and I arrived on the island as everyone does, by a little boat that sails regularly from Sala Comacina, on the western shore of Lake Como.  We climbed up to the restaurant, were greeted and seated at a terrace table by the owner, Benvenuto Puricelli, and the feast began.

First came a half-tomato with lemon, a bottle of Soave wine, and a loaf of bread (“friendly bread,” the waiter called it, presumably because we should tear rather than cut it).  Then the antipasti arrived, a huge platter of roasted half-onions, tiny zucchini, carrots, celery, peppers, French beans, broccoli, slices of prosciutto, and air-dried beef.  After that, the fish course -– a whole grilled salmon-trout, boned at the table, with salt, olive oil and lemon.

Another bottle of wine… Next was the chicken, fried crisp and tender, with a green salad.  When those were eaten and the plates whisked away,  the waiter appeared with a half-wheel of Parmigiano-Reggiano cheese under his arm and scooped out chunks for each of us.  Dessert was fresh peach slices with a delectable gelato and banana liqueur.  The fruit varies seasonally.

Then came the grand finale. Sgr. Puricelli, wearing his signature wool cap, marched out, accompanied by drumming waiters. As we all watched, they set up a table where he prepared quantities of strong, delicious coffee and brandy over a fire and told the story of the island (in Italian, but we got the gist of it). The brandy/fire ceremony, he said, warded off the curse of the island.

The curse? Yes. It seems that as conquerors fought back and forth over the centuries, the once- peaceful Comacina went into gradual decline. In the 12th century, a discouraged poet declared the island cursed. Shortly after that, every building was destroyed, including all the churches and a castle.  The island continued to be battled over until finally, in the 20th century, peace reigned again.

It’s a happy place now, with Benvenuto Puricelli welcoming visitors to his restaurant. Born in Italy, he has been in the restaurant business since the 1960s.  He lived in other countries but returned to Italy in 1976 and became the proprietor of the Locanda. He was wise enough to continue the tradition of serving authentic, simple, regional foods, perfectly prepared, and in an atmosphere you’ll find nowhere else.

Our afternoon meal took almost three hours. When we arrived, six people at a nearby table were chattering in French and Italian as they tucked into their second course.  When we left they were still there, still talking and drinking.  At another table, an American couple read newspapers, ate quickly, and  ignored the drama around them. I was sorry they missed the pleasure of the place.

After our meal, and before catching the return boat across Lake Como, we wandered the woodsy, quiet island.  A path led under olive trees and through grassy fields to the ruins of the Church of St. Euphemia.  In this peaceful spot, we sat in a patch of wildflowers, listened to birdsong, and felt completely contented with Isola Comacina.