For many reasons, Paris’ Quai Branly has caused much controversy among the French and  international visitors.  Despite (or perhaps because of) this continued controversy, it has become hugely popular since it opened on June 23, 2006.  The Musée Quai Branly contains an impressive collection of over 300,000 artifacts from Africa and Oceania that was previously displayed at the Trocadero Museum of Ethnology.

Objects in the museum’s collection include Alaskan headdresses, Nigerian statues, Senegalese beadwork, and ornamental wear from India. The Branly’s curators use the term “objects”  because it conveys that these were not necessarily intended as art pieces; they originally had utilitarian or sacred uses.  The Djennenke statue from pre-Dogon  (10th or 11th century) Mali is considered the museum’s most prized piece.  Part of the controversy surrounding the Musee Quai Branly has to do with the contents and display of its collection. Many are against the display of objects plundered from France’s colonial conquest and believe they should be returned to their countries of origin. Moreover, Quai Branly’s curatorial department has received criticism for its so-called dependence on aesthetic appeal and extreme lighting, as opposed to thoughtful descriptions and accurate context, in its many exhibitions.

The building that houses the collection, designed by Jean Nouvel, is considered a work of art by some and a monstrosity by others.  The museum  complex is comprised of 4 buildings; the main 600-foot-long building sits on stilts, parallel to the Seine, and is covered with 30 multicolored cubes protruding from it at random intervals.  Upon entering the museum, visitors soon learn that there are small exhibitions located in each of the suspended colored boxes.  The other four buildings include a theater for contemporary performances and concerts, a bookstore, and a casual restaurant that looks out over the gardens and Eiffel Tower and a more formal rooftop restaurant. The landscaping was designed by Giles Clement, and includes15,000 plants intermingled with LED straws that periodically change colors, and winding paths for visitors to walk as they contemplate their experience. 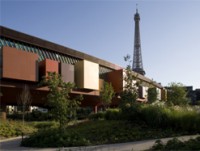 Even though I agreed with much of the criticism regarding the treatment and display of the Quai Branly’s collection, I still found it to be a fascinating visit.  I, personally, am a fan of the architecture – I found it to be both appealing and engaging.  This is not an “easy” building to look at- it requires thought and an appreciation of daring architectural design.  Similarly, the Quai Branly’s collection of compelling objects (which, yes, should be returned to their countries of origin) is thought-provoking.  However, due to a lack of curatorial explanation, getting the most out of your visit requires prior knowledge of the subject matter or a willingness to take notes and research the pieces later.

I wouldn’t dream of finishing my post without a quick review of the Branly’s restaurant, Les Ombres.  Though its name, “the shadows” smacks of French colonial discourse (for those of you who are not familiar with the French context, think Conrad’s Heart of Darkness), I was able to move past my frustration when I laid eyes on the menu.  My creamy garden  peas soup flavored with fresh mint, crab meat and thin shellfish jelly did not disappoint.  Nor did the duck foie-gras terrine with sweet pepper chutney and Dijon mustard.  Another treat was their marjoram-flavored lamb paired with spinach ricotta gnocchi.  An unique île flottante with candied strawberries made the perfect end to the meal.  Located at the top of the Quai Branly, Les Ombres looks out over Paris‘ Eiffel Tower, making for a spectacular view.  Pricey, but well worth the experience.