Having lived in the ancient town of St Andrews for more than twelve months without once swinging a club, I assure you that its beaches, ruins, and cobbled streets offer far more than just the Old Course and hotel culture.

After an hour’s travel north by bus, train, or rented car from Edinburgh, you’ll find the heart of St Andrews along its three main streets: North Street, Market Street, and South Street. Consult this interactive map for a better idea of the town’s layout.

St Andrews is home to the University of St Andrews , Scotland’s oldest university (which also happens to be the 3rd oldest English-speaking university in the world as well as the university ranked 3rd best in the UK—after Oxford and Cambridge on both accounts). With its many buildings and its nearly 7,000 students (versus a population of 17,000 local residents), the University of St Andrews dominates the town. What this means is that St Andrews differs drastically from term-time—when the streets, restaurants, bars, and pubs are filled with students—to the summer—when the students leave and the tourists (chiefly golfers) take over. Do what you will with that information, but know that I’d take the students over the tourists any day.

The University of St Andrews 16th century St Salvator’s Chapel and the nearby St Salvator’s Quad (open daily to the public) are both located on North Street. The Quad, quiet and secluded, fills and empties in waves with red-gowned students passing between their classes. Parallel to and north of North Street runs The Scores. Along this road you’ll find the remains of the St Andrews Castle. Inside these ruins you can climb through the mine and counter-mine dug during a 1540s siege and look down into the bottle dungeon, a massive pit carved from stone and used as a prison. At the eastern end of town where North Street and South Street curve into one another stand the ruins of St Andrews Cathedral. Once the largest building in all of Scotland, some of the cathedral’s spires, arches, and walls still rise to form the town’s iconic skyline. Inside the ruins, climb St Rule’s Tower for a small admission fee and you’ll be rewarded with a breathtaking view of the town and the surrounding countryside. Like many other towns located along the coast of Fife, St Andrews has its own harbor and no visit would be complete without a walk down the stone pier. Warmer days will see students and local children alike taking long runs and jumping from the pier. 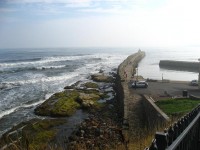 Beaches may not be what first come to mind when you think of Scotland, but when it comes to St Andrews, its sands are almost as famous as its fairways. Just north of town, the West Sands is the largest of three beaches. Most like a traditional beach with soft, pale sand, the West Sands stretches parallel to the Old Course and was the site of the famous beach scene featured in the movie Chariots of Fire. The Castle Sands is a very small, craggy beach located below the St Andrews Castle ruins. Following tradition, at the dawning of May 1st students plunge into the water from this beach. The third beach, the East Sands, curves out from the harbor. On a nice day, it’s not uncommon to see the windsurfers on the water and kite-flyers on the sand.

Visit the Byre Theatre off South Street for live music and drama or the New Picture House on North Street for both Hollywood and foreign films. The St Andrews Aquarium located near the West Sands houses a surprisingly large complex below its modest exterior. Laurel and Hardy, the resident seals, are town favorites. Though this is a guide for non-golfers, I do recommend walking the Old Course, open to the public on Sundays, and taking in its privileged views. In March, St Andrews hosts the renowned StAnza Poetry Festival when, over the course of several days, venues throughout town fill with eager listeners and poets from around the world.

For a snack, try “chips and cheese”—french fries covered with melted cheese and good helping of mayonnaise—at the students’ beloved Empire or one of the dozens of delicious wraps from the Butler & Co wrap bar. Jannettas’ famous ice cream is an excellent treat on warm days; if you’re feeling adventurous, try their signature Irn Bru flavor.

For a proper meal, St Andrews offers a surprising array of choices. Some of my favorites are: the Doll’s House offering traditional Scottish and French fare on a small square between North and Market Streets; the Jahangir Restaurant located on South Street—their Peshwari naan is some of the best I’ve ever had; and the Nahm-Jim and L’Orient Lounge offering Thai food upstairs and Thai-influenced Japanese cuisine in the lower lounge at the eastern end of Market Street. For a more formal meal (without stepping into the golf hotels), head to The Seafood Restaurant, easily spotted at night floating over the water like a Chinese lantern near the aquarium.

There are few places in St Andrews not pouring pints from the afternoon onwards. However, it pays to be discerning when choosing where to take your rounds in this town. Some of the locales are entirely uninspired, lackluster, and spiritless (in both senses of the word). That said, my favorite pubs and bars in St Andrews include Aikman’s/The Cellar Bar with its live “session” music on Tuesday nights and its excellent selection of 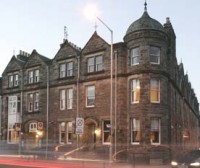 continental lagers, ales, and stouts in addition to its UK classics on tap every night; The Central located in the heart of Market Street and offering a rotating selection of real ales; and The Catch, for its beachside atmosphere near the aquarium.

[N. B. If you happen to be a student and it happens to be term time, the bars you’ll want are Aikman’s/The Cellar Bar, The Catch, The Lizard (St Andrew’s own dance-like club in the basement of The Inn on North Street), and The Raisin (with its notorious £1 drinks menu).]

There are, of course, many hotels in St Andrews. However, for the budget traveler, the Tourist Hostel provides cheap, central lodging. If you’ve outgrown hostels or prefer more comfortable accommodations, try one of the dozens of bed & breakfasts in St Andrews that let for far less than the golf hotels.