Faith and begorrah! Conquering Dublin’s renown Temple Bar pubs just can’t be done. To be sure, it’s not really the sort of place where you should attempt to stagger from bar to bar, slugging back a quick beer at each (although many have tried and failed). It’s more the place where you go to sit and enjoy the friendly ambience of an authentic Irish pub for an evening, before trying another on the next night. In Temple Bar, you sip instead of guzzle, taking your time to enjoy the locals and watch dewy-eyed tourists soaking up the craic (fun). And of course hoist a well-chilled Guinness in salute to everyone around you. 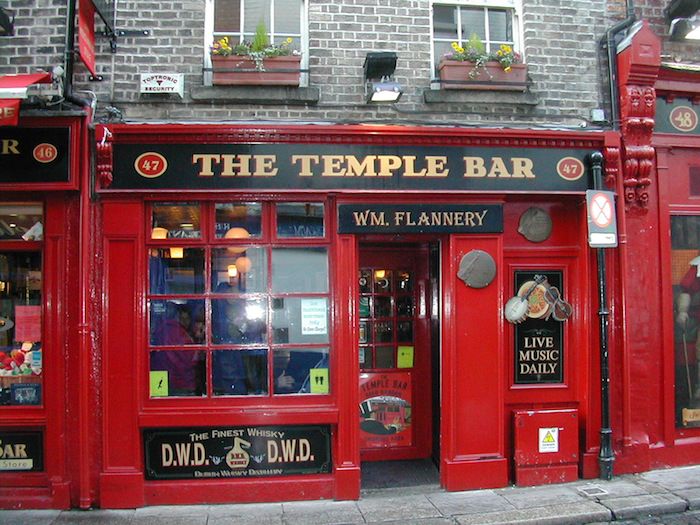 The Temple Bar- the most photographed pub in the world

Located in central Dublin, Barra an Teampaill is a beautifully preserved 1,000 metre-wide rectangle of narrow medieval alleys branching off its picturesque long centerpiece street, also named Temple Bar. Bounded by the River Liffey to the north, Dame Street to the south, Westmoreland Street to the east, and Fishamble Street to the west, this area offers more hip and historic bars and restaurants than you can shake a pint at—over 30 pubs!

Strolling along Temple Bar’s uneven grey brick streets past the brightly painted red, green, and black facades of an apparently never-ending array of bars and pubs, I always feel like I’m walking through a beer drinker’s Disneyland—without the noisy glitz and hype. Rather, Temple Bar lulls you with lively strains of Celtic fiddles, skirling bagpipes, and laughter reverberating up and down its narrow streets; the sweet, smoky smell of hops wafting past your nostrils. 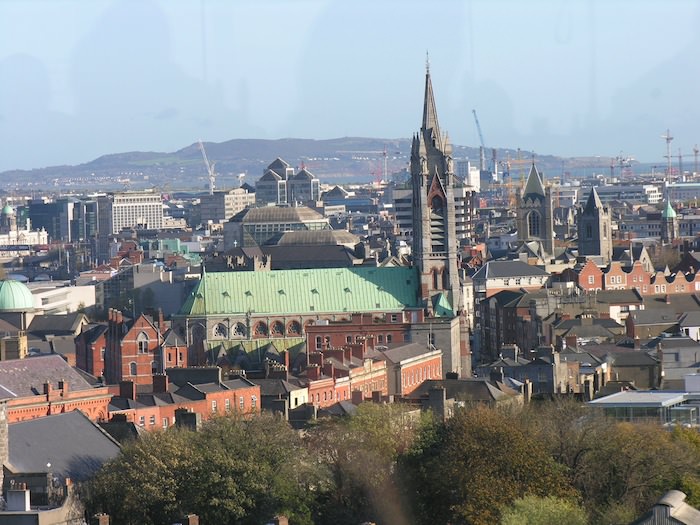 Panoramic view of Dublin from the Gravity Bar

Not all of the pubs at Temple Bar are cosy little places reeking of “Oirish” bonhomie. Every bar has its own distinctive character and clientele. We’ve stumbled across bustling bars crammed with animated youngsters, excited tourists, or screaming sports fans watching the footie on a wide screen. We’ve sat in restaurant pubs alongside families out for dinner, and in quieter pubs for old pensioners. With Trinity College a stone’s throw away, student dives bang out loud music. And as the home of the Irish Stock Exchange and the Central Bank of Ireland, Temple Bar has its share of pin stripe suited businessmen working their blackberries and mobiles in trendy bars known for their carvery lunches. And sometimes we’ve found all of these types of bars in one multi-story pub!

Space does not permit a detailed coverage of Temple Bar’s pubs, so here’s a sampler of some of its better-known alehouses. Tourists inevitably head for Oliver St. John Gogarty, a traditional Temple Bar pub with a distinctive lime green façade. It’s worth visiting OSJG just to look at the décor—the place is stuffed to the rafters with Irish memorabilia. Its three storeys are always packed with a variety of patrons, come to hear the live music upstairs with quintessential Irish folk music favorites like Molly Malone and Finnegan’s Wake. OSJG delivers a craic buzz. Its menu includes delicious traditional Irish dishes like Galway Bay Prawn salad, fresh mussels in a sauce made from Bailey’s Irish cream (killer!), Irish Oysters, and Irish soup. 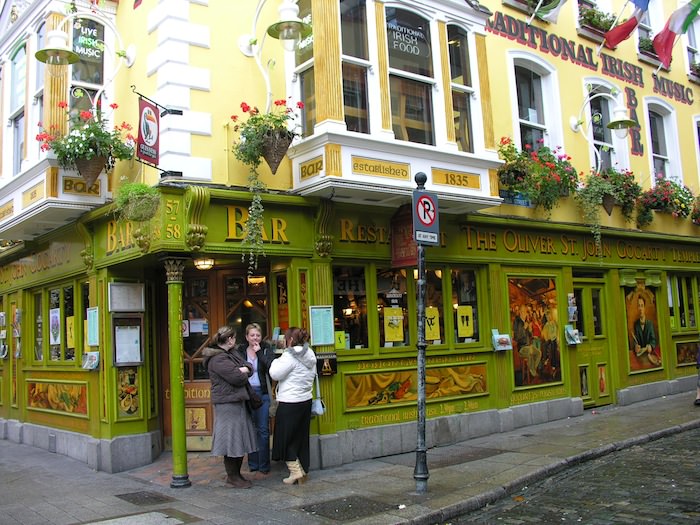 Another iconic tourist haunt, The Temple Bar, is one of the most popular and best pubs in town. With its bright fire-engine-red façade, it’s probably the most photographed pub in the world. With a beer garden and traditional Celtic music, the Temple Bar has a fun atmosphere, if you can squeeze in. 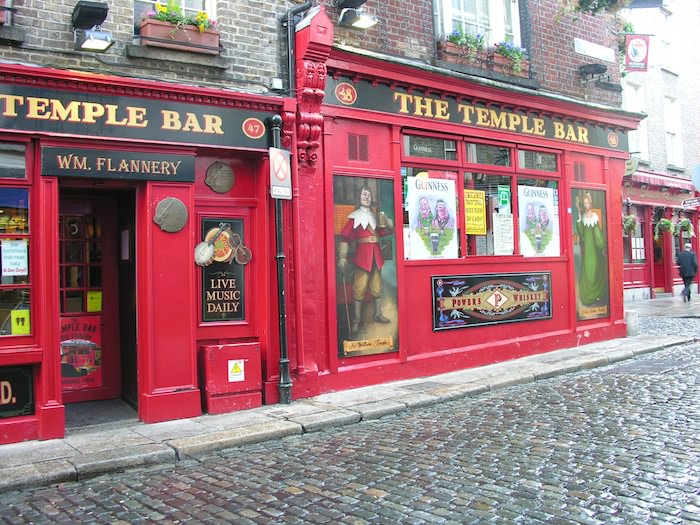 Another view of Temple Bar

The Quays Irish Restaurant & Bar on Temple Bar Square is generally acknowledged as the best of the Temple Bar pubs. Stop to admire its ornate, stylish brown and green tiled exterior and pretty arched windows before you enter. The Quays certainly attracts good crowds, has live music most nights, and good craic. When I visited, an Aussie flag was flying proudly over The Quay, perhaps a testament to who frequents it the most or who drinks the most of its amber liquid. Teac Ne Ceibe, the black-fronted pub right next door is also worth dropping in for a quick 8oz. 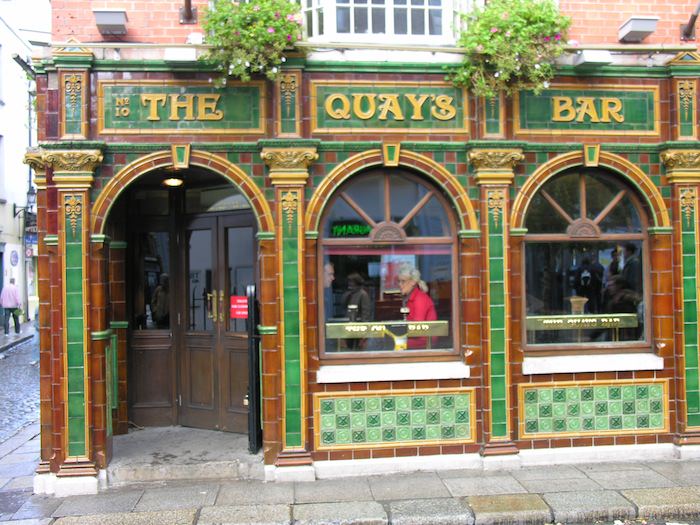 Stylish exterior of The Quays Bar

Fitzsimons, on Eustace Street, another well-known tourist pub, offers live music and Irish dancing most nights. Watching your friends doing an Irish jig after three or five beers is good craic. Trendy Left Bank Bar on Anglesea Street, once part of the Central Bank of Ireland is a late night bar that also offers live music. The Left Bank still retains many of its original bank fixtures; look for the specially moulded coins in the ceiling and walls. The Auld Dubliner on Temple Bar is another traditional tourist bar, always with good craic, mixed crowds and occasional live music. 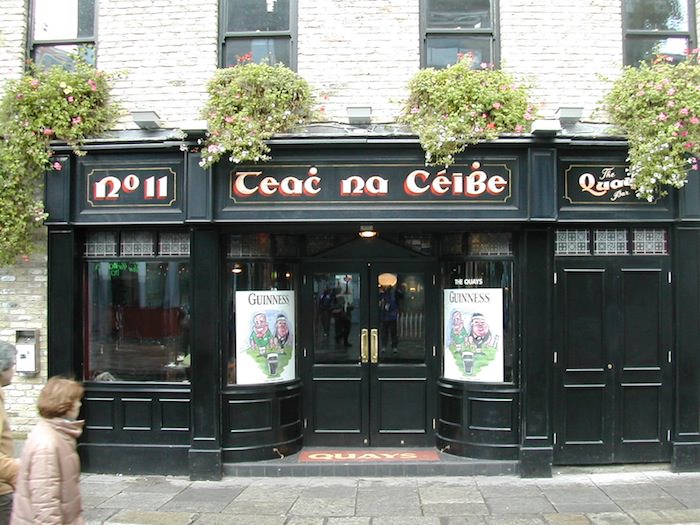 But it’s time to move on from Temple Bar. I still have to pay homage to the black brew that has made Dublin and Ireland famous—Guinness. The Guinness Storehouse, only a mile west of Temple Bar at St. James Gate Brewery, explains why stout tastes so good at Temple Bar—it’s fresh. 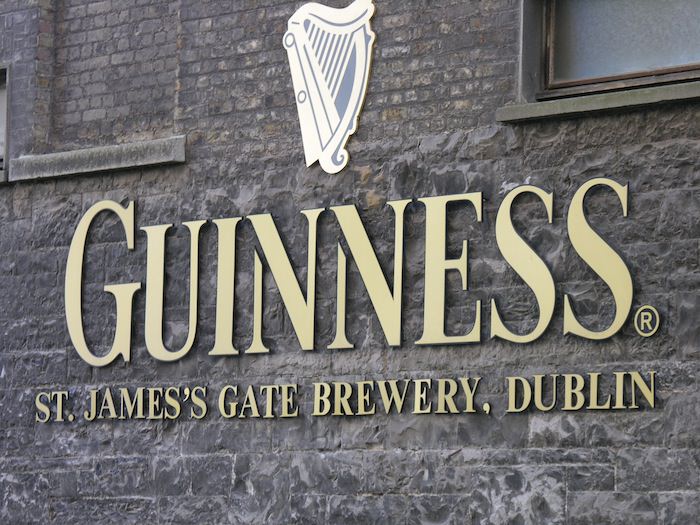 If you’re hoping for a brewery tour, you won’t find it inside this huge six-story pint-glass shaped glass atrium, but you will see everything you always wanted to know about the history and marketing behind Ireland’s most famous export.

Over 4 million visitors have made this self-guided tribute to Arthur Guinness and his beverage since it opened in 2000. The “museum” is a series of displays arranged on each floor in the original brewery, with thick exposed blue-painted steel girders overhead. You’ll need two hours to watch the videos and documentaries, play with hops and barley, look at Guinness memorabilia, watch old films about cooperage inside a theatre shaped like a beer barrel, and examine the tools used in barrel making. 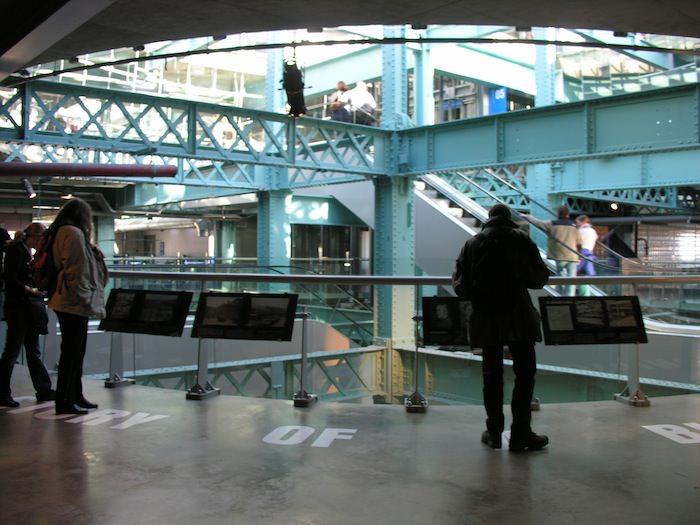 You’ll also pick up all manner of important beer trivia to impress your mates with over a pint at your local. For example, this vital fact is especially interesting to Australians: Irish pubs in Perth have to be especially careful when ordering supplies of Guinness because the kegs have to travel four days by road to get there. Or, on average, one Irish pub opens every day somewhere in the world, and it takes 3.5 months to build and install an Irish pub. 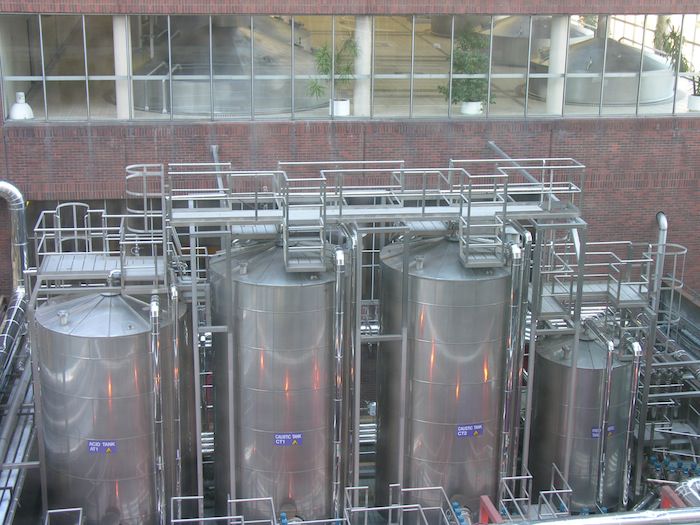 Guinness brewing vats as seen from the Gravity Bar

Make sure you stop to read the highly entertaining Guinness advertisements. My favorite: “Guinness builds strong muscles. It feeds exhausted nerves. It enriches the blood. Doctors affirm that Guinness is a valuable restorative after influenza and other weakening illnesses. Guinness is a valuable natural aid in cases of insomnia”. Great stuff! 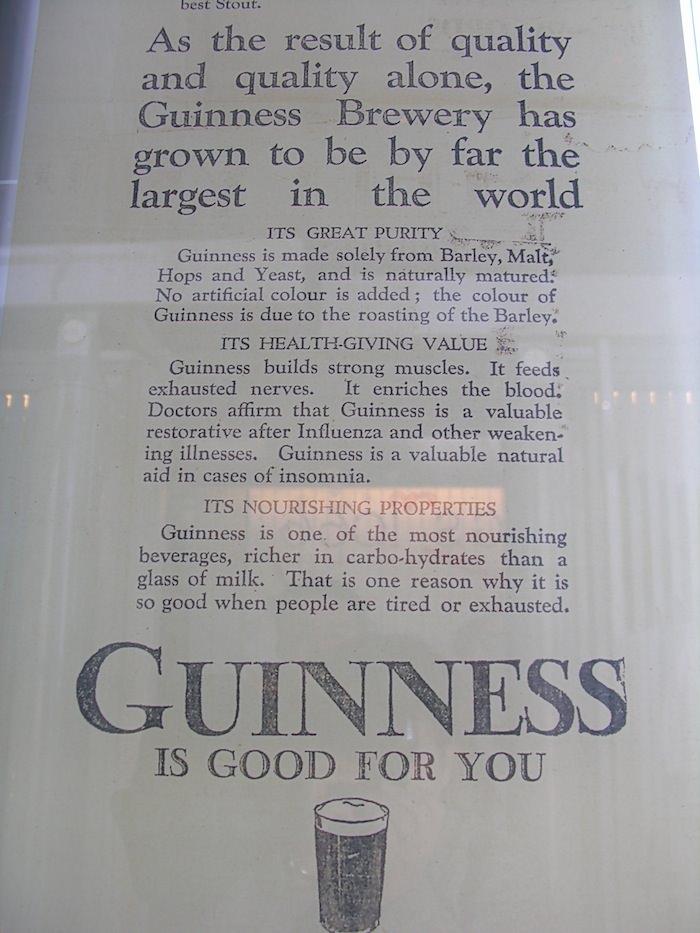 But the displays, interesting as they are, are mere froth compared with the real reason why you come to the Guinness Storehouse. After clambering up and down six flights of metal stairs and learning about beer making, you’ll have worked up a wicked thirst—and the place to slake it is in the Gravity Bar, perched high up on the seventh floor of the Storehouse. Claim your complimentary pint of chilled stout and enjoy the spectacular 360-degree panoramic view of Dublin in this elevated glass house. Watch in awe as the highly skilled bartenders draw shamrocks in white foam on the top of your beer. 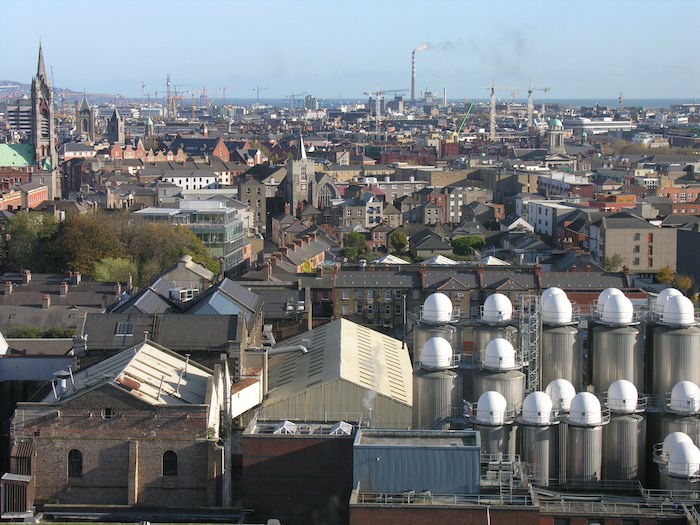 Dublin’s Temple Bar offers an enticing ambience and pub life that soaks up more time and beer than most tourists ever plan on spending here. There’s just too much temptation to sit in the warm, welcoming bars and chat with the locals, listening to their well-intentioned blarney in that beautiful lilting Irish accent.

You won’t just wet your whistle here in Dublin; you’ll drown it in fine, tasty, chilled beers and ales, and of course Guinness, the very lifeblood of Dublin and Ireland. Best of all, they’re real Irish pubs—not the kitschy reproductions you see in every major city around the world—so you’ll meet friendly Irishmen and women in their natural habitat.

In a city known for its beer and Guinness culture, Dublin indeed packs more pubs for its weight than most other European cities, and does it with quaint style and class. Silenus, the ancient Greek God of beer would be pleased.

very very very nice description of Dublin and places in Dublin...good work keep it up..