The Spanish city of Valencia is a fun place to visit at any time of year. But for five days in March, something extra special takes place. Processions wind through the city streets, with thousands of locals dressed in gorgeous traditional costumes. Parties and concerts begin at 1:30am and last until the next day. Parades liven up the afternoons and fireworks light up the midnight sky. There is food, music, dancing, the smell of churros and the sound of firecrackers. Huge, colourful statues are erected on street corners, and just when you’re convinced that this is the most spectacular display you’ve ever seen, they burn the whole thing down. 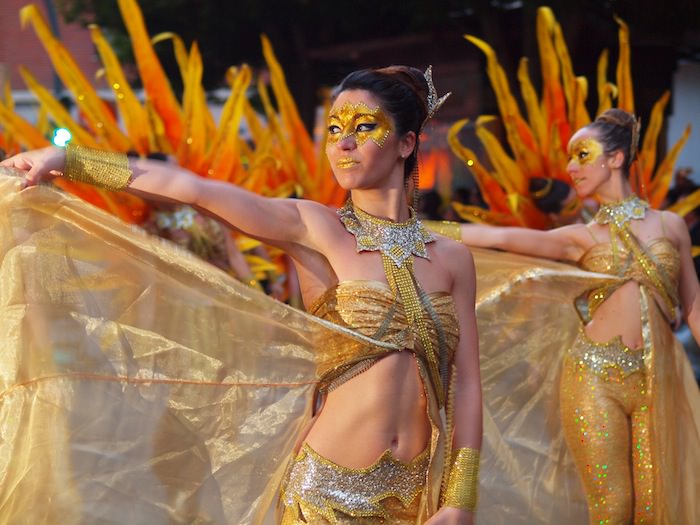 Las Fallas – The procession of fire

Like any good Spanish festival, the origin of Las Fallas is unclear. It is thought to have started in the Middle Ages, when carpenters took scraps of wood and waste collected over the winter – including the parot, a wooden plank used to hold a candle on dark winter days – and burned it all as a form of spring cleaning. Over time, the date of the burning was set to coincide with the festival of Saint Joseph – the patron saint of carpenters – and people started having fun with the parot, often dressing it up to resemble a local personality. Today, the parots have evolved into the colourful ninots (Valencian for puppet or doll) who make up the large and elaborate construction called the falla. A design team composed of artists, sculptors and painters is assembled in each neighbourhood in and around Valencia, and they spend months designing and building their own falla. There are around 500 in total, of all shapes and sizes, made of papier-mache and other materials, some reaching several stories high. The competition to produce the best one of the year is fierce. 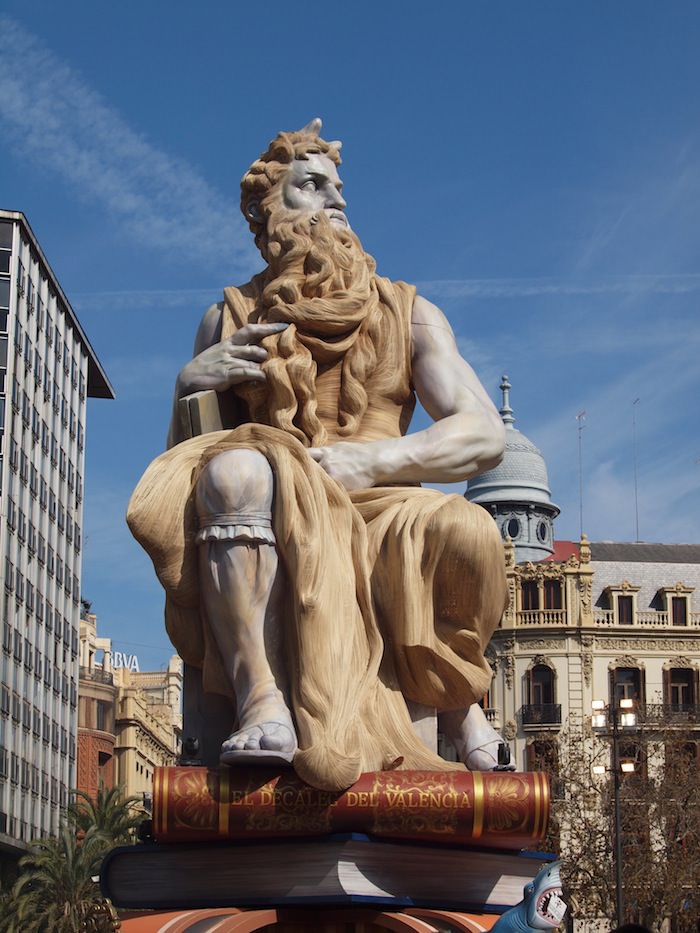 The grandest Falla – in Plaza Ayuntamiento

The fallas often have a satirical theme, usually political in nature, poking fun at people or events from the past year. They can be quite risqué, hence there are also the Fallas Infantiles, separate structures designed just for kids. It is a community affair, and though the subtleties of the fallas’ messages might be lost on visitors, you’ll have a ball searching for them around town and choosing your favourite. 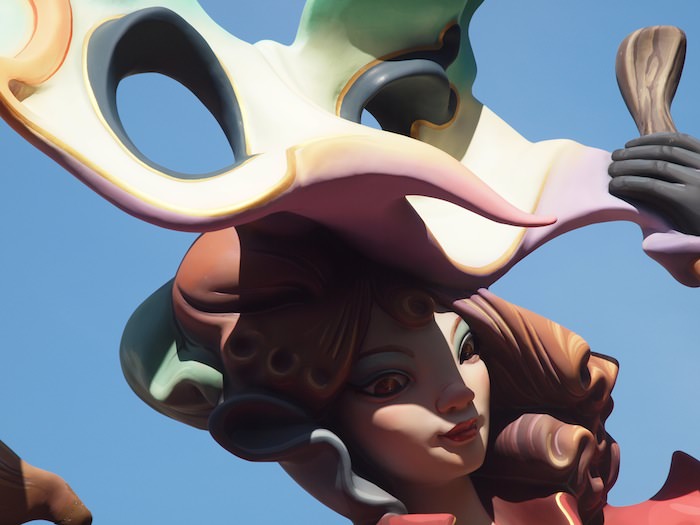 The actual burning of the fallas happens on March 19, but the week leading up to it is one of the best times of the year to visit Valencia. The weather is cool and the neighbourhoods are alive with concerts, drinks and dancing. Stalls are set up selling churros and a type of donut called a bunyol, and beer and wine flow freely. Spanish kids love firecrackers any day, but during Las Fallas they really go nuts, turning avenues into warzones; no matter how many times per day you hear them, the explosions never fail to startle. 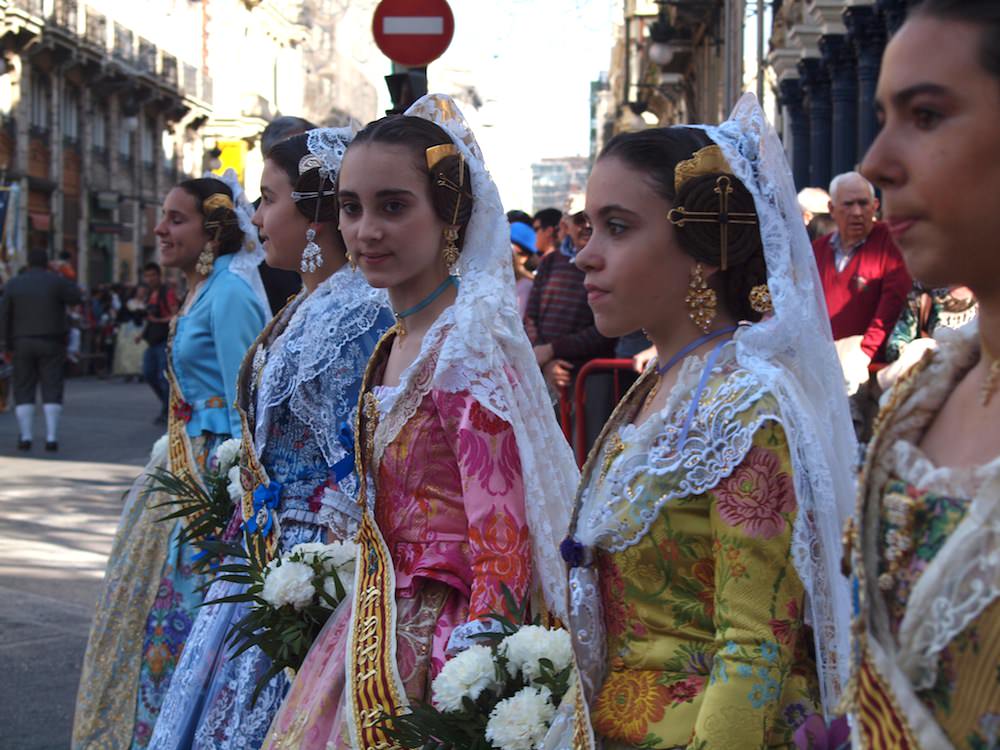 Beginning on March 15 there is a nightly fireworks display in the Turia Gardens, which gets progressively more spectacular until the Grand Finale on March 18, the Nit de Foc (Night of Fire). People head to the gardens with food and drinks to watch the show before hitting one of the many parties around town. 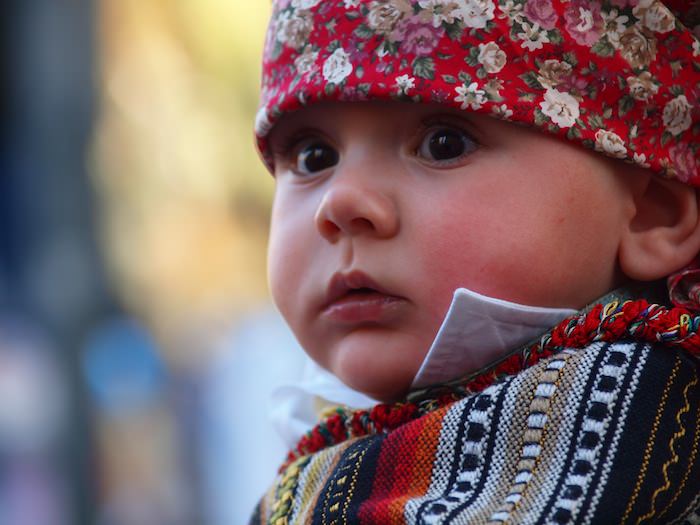 Most events, in true Spanish form, take place at night, but there is plenty to do during the day as well. On March 17 and 18, the Flower Offering procession fills the streets of the city centre as falleros and falleras, wearing traditional Valencian dresses and hairstyles, arrive from all corners of the region with bouquets for the Virgin Mary. By the end of the two days, the statue and its pedestal in Plaza de la Virgen are covered in fragrant flowers. This parade is the best time to admire the beautiful costumes of the falleros and falleras – a role which is taken very seriously, and can only be held by someone born and bred in Valencia – though you will spot them walking around throughout the week. 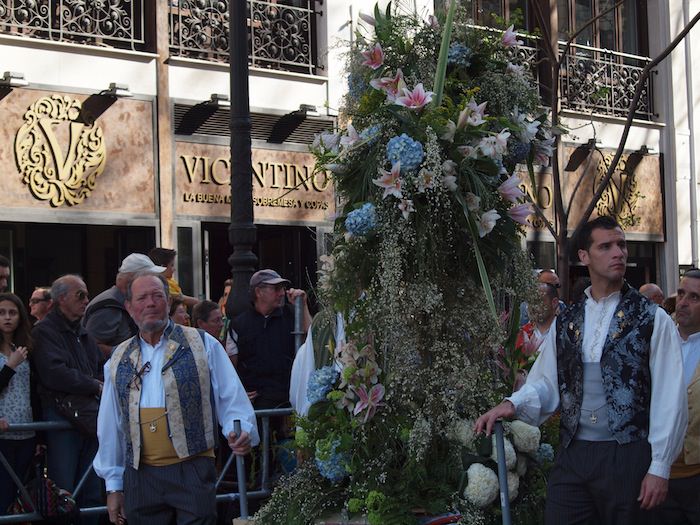 One of the most incredible events of Las Fallas is the daily Mascletà. Imagine the wildest fireworks you’ve ever seen, and then put them into a tin can; thus is the sound of this daytime show, a spectacle like nothing you’ve ever experienced before. The most impressive Mascletà, or concert of gunfire, takes place at 2pm in the Plaza Ayuntamiento, Valencia’s main square. Of course, fireworks are impossible to see in the sun, but their sound is extraordinary, vibrating through your body as if they were actually exploding within you. You might have seen fireworks a million times before; during the Mascletà, you will actually feel them. 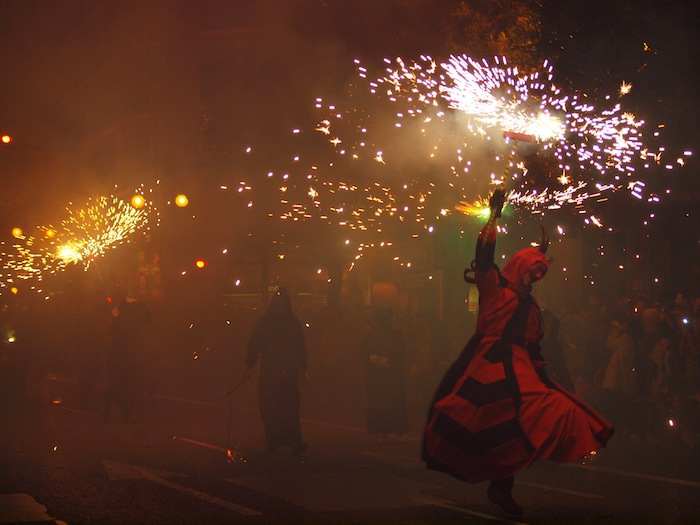 The procession of fire

Fire is celebrated throughout the festival, but the final parade showcases the element in all its glory. The Cabalgata del Fuego (Procession of Fire) takes place along Calle Colon on March 19, with floats, dancers, fire, giant mechanisms and music, all incorporating fire in some way. You can stand very close to the performers and their flames as they pass; it is one of those times when you appreciate just how intense and magical Spanish fiestas can be. 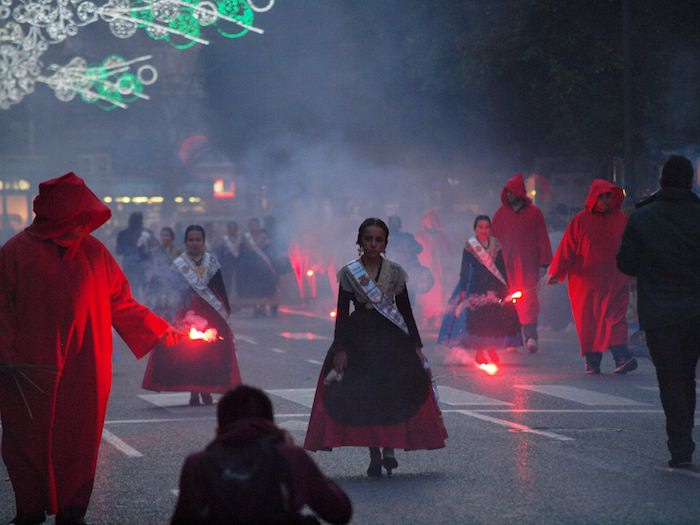 The procession of fire

The festival wraps up around midnight on March 19 with La Cremà (The Burning). If the burning is intended to be a spring cleansing, it comes at the perfect time because after five days of partying, everyone is ready to start anew. All of the fallas around town are simultaneously strung with firecrackers and lit up; the constructions, which took so long to bulid, explode and burn to the ground within moments. The massive falla in the centre of Plaza Ayuntamiento is burned last, and is the most impressive to watch due to its size. However, you might prefer to watch the burning of your personal favourite falla instead; in the smaller neighbourhoods, there will be fewer crowds and you get close enough to feel the heat from the fire and to feel the sense of community that went into making the creation, and the entire festival, a success. 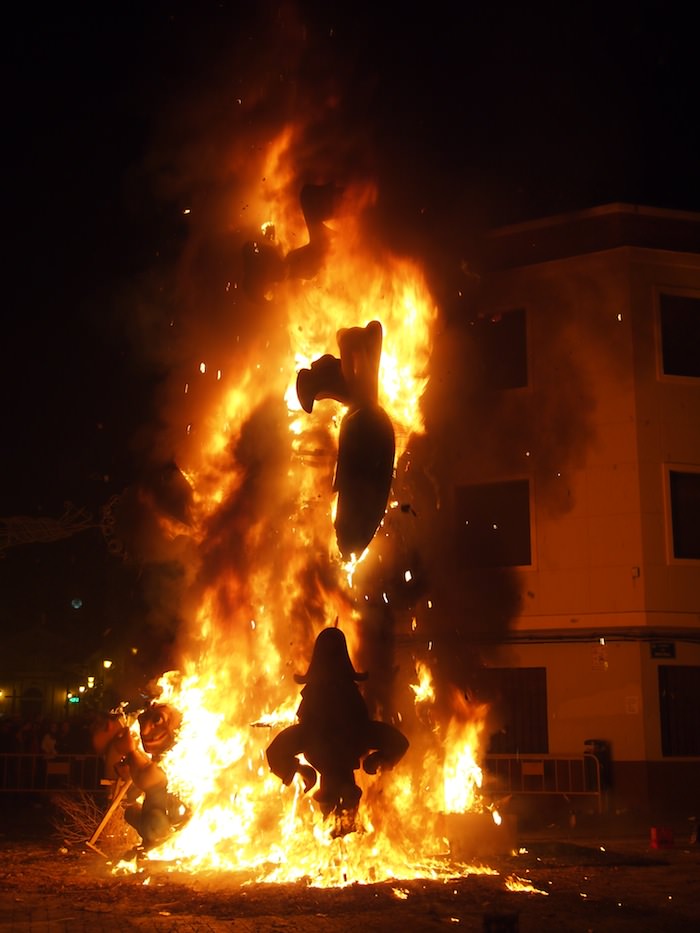 The crema – when it all burns down

For more information on Valencia, Please check out these Posts:
Put Valencia, Spain on your Bucket List
and
Valencia, a City in Seven Markets

Written by and photos by Andrea MacDonald for EuropeUpClose.com