Tucked away beside a small bay on the lush northwest coast of Greece, the little town of Parga clusters in tiers below a Venetian kastro (castle). Parga, located 53 km south of Igoumenitsa, is a popular destination for Greek and Italian tourists, and an ideal stop-over if you plan to visit some of the interesting historical sites in the area. 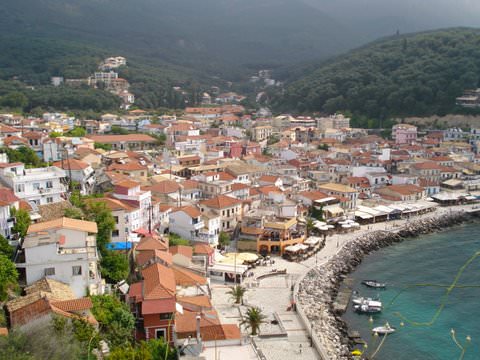 One of the charms of Parga, in spite of its busy tourist activity, is in the lower quarter where you’ll see ladies dressed in traditional garb with black veils, braided hair and dark blue kerchiefs. At the Venetian castle you can enjoy a view of the coast and little offshore island, Paxi, while sipping a chilled frappe at the castle restaurant. The best times to visit Parga if you want to avoid the crowds, are Spring and Autumn. I’ve been there three times. I have happy memories from each of those visits, although on my first visit, arriving in the evening during a music festival, I very nearly found myself sleeping on the beach. A last-minute cancellation provided me with a pension up on the hillside.

Parga itself has an interesting history. From the 1300s – 1700s the port was a Venetian stronghold. The Venetian Lion of St. Mark still stands guard over the portals of the kastro. In later dates, both French and Russians took over the town until it was acquired by the British and became a British Protectorate. At this time the Ottoman Turks ruled the Balkans and the notorious Ali Pasha was carving his own Sultanate out of north west Greece. Unfortunately, in 1819, the British agreed to sell Parga to the Ali Pasha with a promise of a truce for the Souliot freedom fighters who occupied the area. The majority of townspeople, knowing his brutal reputation, fled to the Ionian islands. The rebellious Souliot partisans, however, resisted and this led to a historic event in Greek history. 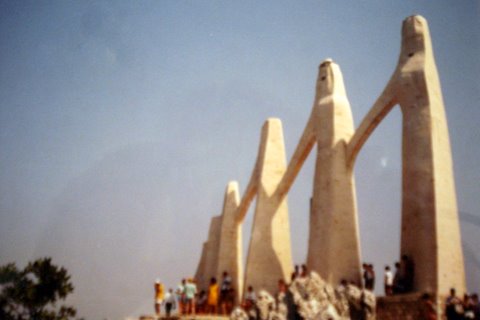 Sixty kilometres from Parga, the towering cliffs at Zalongo are immortalized by the defiant actions of a group of Souliot women who committed suicide to avoid capture by the Ali Pasha’s soldiers. At the foot of the high cliff, some Souliot men had blockaded themselves inside while their women and children climbed the mountain to escape.  What happened next was a tragedy that is marked by a towering sculpture of dancing women, erected in 1954, commemorating the Souliot women’s heroism.

When the Ali Pasha’s men arrived and found the Souliot resisters inside the monastery, they set fire to the building and killed the men.  Rather than be taken to prison by the Turks, the women, who were watching from above on the cliff, began to dance and sing as they circled closer and closer to the edge. Then one-by-one, some with their children in their arms, they leapt to their deaths. Only two baby girls survived. They were later cared for by the nuns of the monastery.

I climbed the 410 steps up to the monument and stood at the cliff-edge where the sixty-eight martyrs threw themselves off. It was a moment I will never forget, made even more significant as I  stood in the shadow of the magnificent monument, sculpted by artist Georgos Zongalopoulos and dedicated by the Greek army. The original monastery, burned by Ali Pasha’s soldiers in 1803,  has been replaced by a new monastery  with a souvenir shop run by nuns.

The entire area has many important historical sites such as Kassope, an ancient city destroyed by the Romans in 168 BC. On the drive to Zalonga you’ll pass the remains of the Temple of Aphrodite.

Necromanteion, the Oracle of the Dead 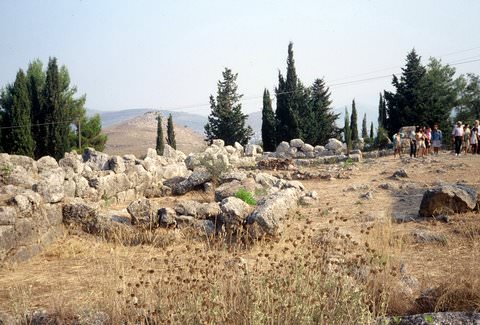 One of my favourite excursions from Parga is the cruise along the scenic coast and up the mysterious Acheron River, symbolic of the ancient River Styx. At the end of the cruise you disembark and climb up the rocky hillside to the site of the Necromanteion, the Oracle of the Dead . This was one of the most famous sanctuaries of ancient Greece, mentioned in Homer’s writing which tells how Odysseus went there to commune with Achilles’ spirit. This site was related to the realm of Hades where the spirits of the dead remained and the ancient Greeks believed it was the entrance to Hades.

I’ve made the pilgrimage to the Necromanteion twice and both times allowed my imagination to run rampant, pretending what it must have been like way back when. There are only ruins left now, other than the deep cavern where you descend into Hades, but it’s spooky fun to pretend.

In ancient times, pilgrims were lodged for the night in windowless cells where they were questioned by the priests and fed a variety of foods including beans and psychoactive lupin seeds which induced a trance. Later they were led down a narrow stone labyrinth said to have been filled with hallucinogenic smoke. Eventually they descended into the pit of Hades, a damp underground chamber where the Necromantic audiences took place. Many years later it was discovered that the spectral visions they communicated with were really the priests. In 168 BC, when the Romans found out about this sham, they destroyed the sanctuary. Later a church, Agios Ioannis, was built on the remains. The Necromanteion can be reached by car to the village of Mesopotomos, 22 kilometers south east of Parga. 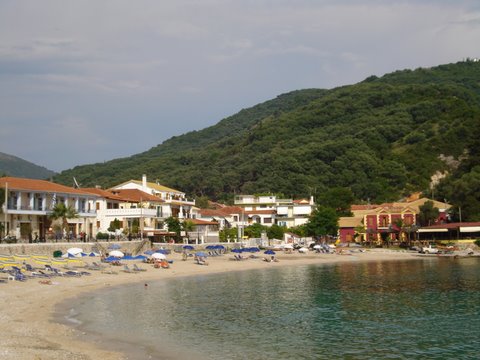 Besides the historical sites near Parga, there are several excellent beaches. In Parga itself, there is a small beach at the port and a larger, Kronari Beach, reached by foot on the opposite side of the kastro. The river cruise boat usually includes a stop at one of the more remote beaches.

You can also take walks along the Acheron River, although my experience proved somewhat treacherous in places, so I’d advise travelers to check the details of the trek beforehand. Much of the walk is actually in the river where  the rapids were sometimes swift enough to carry shoes away and in other places the chilly water was chest-deep. It was a daunting and frightening experience for the non-swimmers in the group.

Thanks for the info on the beach. Next time I visit I'll be sure to check it out.

Lichnos beach is one among the most beautiful beaches of Parga which is conveniently located in a pretty and natural beauty bay, just 4 kilometers distance of the town of Parga. Even though Lichnos beach is well hidden in the warm hug of a green bay, visitors can easily find it on their left side while they are travelling towards Parga. This sandy and pebbly beach with clear, deep water is accessible by car, by motorbike, by bicycle and by boat. For those who are real funs of adventure and walking along ancient paths through countryside, Lichnos beach can also be accessible on foot. The magnificent scenery of this beach which successfully combines the green of the olive groves with the blue of clear sky and clear crystal sea water, makes it one among tourists’ most favorite beaches. For those who want to experience unforgettable and exciting feelings by practicing a wide range of water sports such as fishing, jet skiing, diving, scuba diving , surfing and paragliding, Lichnos beach is the ideal beach. Also Lichnos beach is highly recommended to those who love sunbathing on the beach , relaxing under the shadow of a parasol or rending a pedalo in order to explore the Ionian Sea. Welcoming restaurants, taverns and cafeterias provide guests with high quality services during the day.