After hiking around the Acropolis, eating spanakopita, and watching the changing of the guard, there was one more important cultural aspect of Athens that my friend said that I needed to see: the cafes. It was mid-afternoon on a sweltering day in May. The temperature was over 100 degrees and I wasn’t so 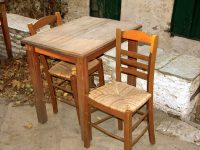 sure that I needed a coffee as much as an igloo, but I let her have her way. My friend, who was born in Athens, explained that the cafe-culture in Greece has a truly massive importance.

A kafenion, or coffee shop, used to be an all-male meeting place. Greek men would gather to talk business and politics while drinking coffee or ouzo (the traditional liquor of Greece). Today, cafes are frequented by everyone, from business men and women, to college students, to bakers of baklava, to punks with mohawks. Finding the right cafe to suit your style is half the fun. Drinking coffee is still seen as a social function, and people spend hours in cafes.

Because it was summer, the cafes were filled with people. The cafes ran down both sides of the tiny street and the tables were practically positioned in the street. It was a lively scene, and everyone was drinking frappes. A Greek-style frappe is a made with instant Nescafe mixed with milk, water, sugar, and ice. My friend taught me how to drink a frappe, which I thought would have been obvious, but it turns out there is a trick to it. The frothy drink is more expensive in Greece than in the United States—between three and five euro—but you get twice the enjoyment. As it is practiced in Greece, when the drink is two-thirds gone, you add water to the remainder and the drink miraculously restores itself.

This aids the custom of spending hours in cafes. Athens is very hot in summer, and everyone sits in cafes, drinking frappes and playing backgammon. You’ll find backgammon boards in almost every cafe, available free of charge to patrons. You can spend an entire morning or afternoon drinking a frappe, pouring in water, and playing backgammon. The object of backgammon is to move your pieces off the board before your opponent. This is determined by the throw of two dice. Many of the tabletops have backgammon boards painted on them. The game is said to be the oldest recorded board game in history, developed by the Ancient Egyptians 5000 years ago.

I can’t speak Greek but it turned out to be rather easy to communicate. All you have to say is “frappe,” or, if you need a backgammon board, “tavli,” which literally means board and is Greek for backgammon. However, it is fairly common for people in Athens to speak English.

There are two popular neighborhoods in Athens that are completely packed with street-side cafes. The Plaka is the oldest neighborhood in Athens and is located in the shadow of the Acropolis. It is more gentrified than some areas, and cafes are accordingly more expensive, but they afford beautiful views of the Acropolis. The Psiri is the neighborhood I visited, and it is a bit more seedy, more hip, and devoted to nightlife.

Final notes: Hot coffee in Greece usually has a thick sediment at the bottom of the cup. Also, Syntagma Square (the most central place in Athens; and a transportation hub) has free wifi.

[…] in the Plaka and Psiri Neighborhoods The frappe might as well be the national drink of Greece, and the café or coffee house is one of the most […]

[...] castle you can enjoy a view of the coast and little offshore island, Paxi, while sipping a chilled frappe at the castle restaurant. The best times to visit Parga if you want to avoid the crowds, are Spring [...]

sooo! coool! i am dying like to take a sip from that coffee in the second picture! im sure it must be very refreshing! im visiting athens this summer and cant wait! i here the greeks really appreciate the coffee!

i want to be there!! too! amazing

It's a lot of fun! A great way to pass a sweltering afternoon.