Gazing out from the shelter of an umbrella across the Loire River to Nantes’ hazy industrial islands, you will be transported back in time to the mystical shores of adventure and scientific discovery enshrouding the novels of Jules Verne (1828 – 1905).  He was born and raised on Île Feydeau, a former shipyard that has been recently 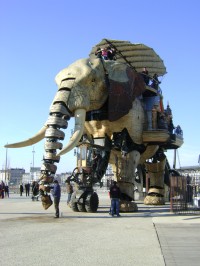 transformed into a landscaped open-air leisure and exposition center. It is also the permanent host to the Machines of the Isle of Nantes collection.  Among the collection’s curiosities is a larger-than-life mechanical elephant that tours the isle, plodding its iron limbs and spraying onlookers with its trunk, to the amusement of visitors atop its back.

There are many tributes to the French author tucked into this lush, rainy maritime city. The Jules Verne Museum, for example, sits atop a staircase viewpoint with balcony 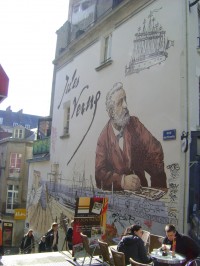 views of the Loire, and houses his manuscripts, furniture, machine replicas, and memorabilia. Other traces include Crêperie l’Île Mystérieuse, both an ode to the novel and an excellent restaurant boasting some of the best local Breton fare as well as an intimate setting, and a bright orange air balloon in the corner. Lining a staircase in the middle of the shopping district you’ll find a large mural highlighting Jules Verne’s monsters and machines.

Since Nantes is located only 30 miles from the Atlantic coast, many locals make a daytrip out of St. Nazaire or La Baule, a west-coast version of Nice, right at the mouth of the Loire.  In Nantes, you’ll find all sorts of fresh (and often live) seafood displayed in front of restaurants, especially  Place Graslin – known for its breathtaking roaring twenties déco and upscale delicacies. Or try the famous brasserie La Cigale – a perfect stop before a night at the Opera – just opposite the roundabout 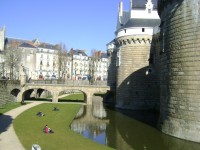 Nantes is also home to the Châteaux des Ducs de Bretagne. Built in 1207, it offers a recently renovated interior and history museum.  Musicians and students picnic down on the banks of its moat where there  is a great view of the Musée des Beaux Arts and la Tour LU. The former Lefèvre-Utile Biscuit Co. factory, which now serves as a restaurant, bar, art gallery, and music venue is doubly named ‘Lieu Unique’. It also offers historical tours and a panoramic view of the city. 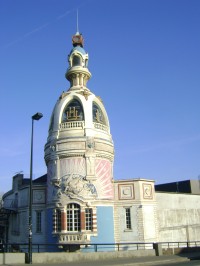 Countless shops line the sloping streets connecting the major Places of Nantes – Place Graslin, Place Royale, Place du Commerce, and Place Bouffay – with gardens, large grassy roundabouts and fountains, and an old 19th century Passage Pommeraye with worn wooden staircases and angel lampposts around the inner balcony. Bouffay is a great ethnic restaurant district with every type of food imaginable crammed together on narrow streets amidst jewelry shops and lively bars. It is located just around the corner from the Cathédrale Saint-Pierre-et-Saint-Paul.

Looking for an extra dose of inspiration?  Slip into Fées Maison (a play on the term ‘fait maison’, or homemade, this instead translates to ‘Fairy House’), with its dozens of potions and elixirs to sample in a magical setting of dragon, gnome, and pumpkin artwork.

Written by Renee Altergott for EuropeUpClose.com