Every time I travel to the Amalfi Coast I am swept away by its beautiful beaches, its incredible seafood, and the kindness of the people who live in houses built into the sheer cliffs.But it was only on my last trip that I discovered a plethora of hiking trails. The trails wind back through gullies and reveal the incredible tropical micro-climate that, if anything, reminds me of the Na Pali Trail on Kauai, Hawaii. Other trails climb out of the valleys and up the cliffs.

>>Make sure to check out our Hiking Packing List for Day Hikes and Multi Day Treks. 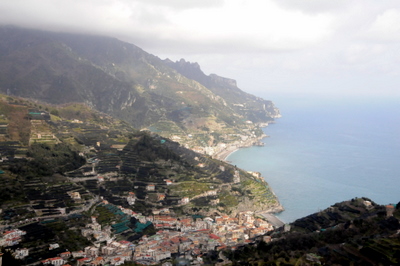 Not for the faint of heart, many lead to the fingertips of the cliffs where castle ruins and lemon trees look down over towns like Positano and Amalfi. While every town has its own trails, I found the Valle delle Ferriere trail behind the town of Amalfi the most spectacular.

My girlfriend Kristin and I received a map from the owner of A’Scalinatella ,the hostel we were staying in. To reach the trailhead we walked back through the center of Amalfi until we found a cement walkway on the right side of the valley. 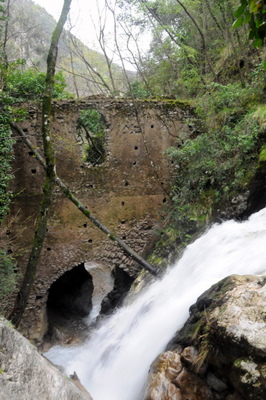 We continued on this trail until the houses disappeared and the cliffs towered on either side of us. The same stream that runs beneath the town of Amalfi runs along the trail. It played an important part in the development of Amalfi during the Industrial Revolution, and four paper mills were built on it to harvest its power. The immense remains of these paper mills are part of the magic of the trail, and when we approached the first, we felt like we were lost in time, its age evidenced by the tangle of vines and ferns that have overcome it.

The valley has a subtropical micro-climate and a lot of beautiful flora and fauna as a result (we were even told of a carnivorous plant). We visited in April and the stunning waterfalls were flowing wildly—some from far away, way at the top of the cliffs, and some right at the bottom with us. The last ruin along the hike is an iron foundry from the 1400s, through the center of which a powerful waterfall gushes.

After the iron foundry the trail splits. One side goes farther into the gully and eventually meets an ancient aqueduct as well as a spectacularly tall waterfall. This waterfall can be seen from the foundry; however, the trail quickly becomes challenging. The other trail continues up the right side of the valley to the town of Pontone. Hikers should note that this trail will eventually run down to the town of Atrani, which is a five-minute walk from Amalfi along the road, but the way is not clearly marked by signs. It will add significant time to the overall hike, but it is incredibly beautiful. 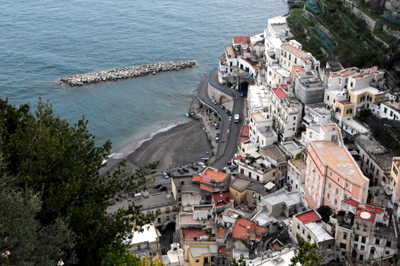 View from the trail

Kristin and I took the trail to the right and eventually came to the castle of Pontone. The ruins of one tower sit on the very point of a cliff, and we looked out over the waterfront of Amalfi on one side and the waterfront of Atrani on the other. As we hiked back to our hotel, I was happy that we’d experienced an entirely new perspective of the Amalfi Coast.

Marilyn----And don't forget to get a map at the local tourist office. The Valle delle Ferriere trail is quite easy to hike, but the "Pathway of the Gods" is serious business.

Michael---The trail I hiked most recently went high above the Valle delle Ferriere... Wow. It was both stunning and perilous. Do you know if "Pathway of the Gods" goes along the entire Amalfi Coast? If it does, it'd be a better way to go than my moonlight hike along the road:)

There are indeed many hikes on the Amalfi coast! Our favourite was the Sentiero Degli Dei (Pathway of the Gods). It is a really nice way to take in the views - I still think the buses are a must for witnessing the sheer mind-boggling spacial perception of the drivers - but the hikes are of course much more serene.

Looking forward to your post on Naples as this is a city we made sure to avoid! I'll be interested to hear what you make of its less salubrious qualities - sometimes we have a hard time getting passed these to see the charm.

These hikes sound great. I'm printing this out to save for my next Amalfi coast trip. Thanks! Marilyn

Absolutely stunning... I'd love to head back to the Amalfi coast, having only spent a few days in Sorrento a few years ago.

I bet the hike was a lot more rewarding than the coaches many holidaymakers seem to see the drive from.