For many travelers, Frankfurt am Main is the initial stop on a European tour, but not a destination in and of itself. The tendency is to swoop in and grab the connecting flight to Venice or buy train tickets for Paris, but don’t give in to impatience! Every city in Europe has charm and history — Frankfurt is no exception. 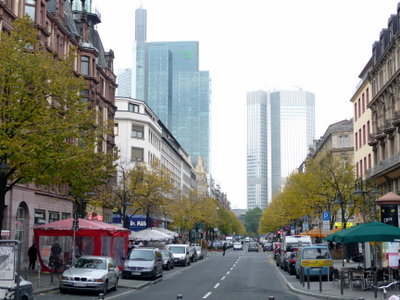 The best way to get around Frankfurt is with the subway system – probably one of the easiest systems to understand in all of Europe. From the airport, there is a direct link to the main train station, Hauptbahnhof and also the central shopping area of Hauptwache.

The main shopping leads west to one of Europe’s grandest opera houses, die Alte Oper, one of the few buildings spared by Allied bombings during WWII. The plaza in front of the opera house is a fine place to sip a good coffee or dip into smooth Italian ice cream. 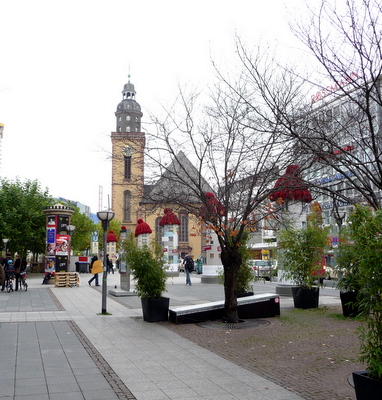 No one should visit Frankfurt without visiting the cathedral, or Dom, by the river, just south of Hauptwache. The cathedral towers above the old city center, Romerberg, a cobblestone plaza ringed by smiling, colorful houses in the classic patchwork designs that hint at roaring fireplaces, overflowing steins and massive roasts. This is actually Frankfurt’s City Hall and has been for more than 600 years. Business is now done elsewhere, but you can find food and drink here on the weekends, in the summer and especially during Christmas, when the markets stretch from Romerberg to St. Paul’s Church around the corner. 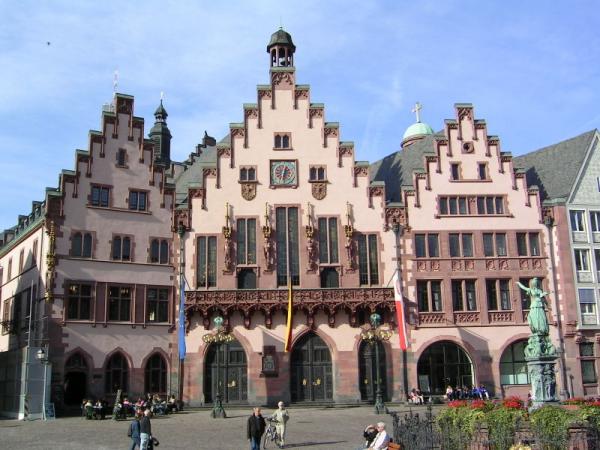 Just in between St. Paul’s Church and the cathedral is Goethe’s residence while he lived in Frankfurt. Goethe is one of Germany’s greatest poets and writers and he always loved this city – Frankfurt in turn claims him as its own son.

Take a peek at the old Roman ruins to the left of the cathedral if you are coming from Hauptwache. Frankfurt is more than 1200 years old and began as a Roman fort on the Main river.

From Roemerberg, you will be just a few minutes from the Main river. On the north bank of the river is a small coffee house that serves joggers, dog walkers and riverwalk lovers throughout the summer. There are several walking bridges that cross the river to the south side of the city, but the best one is the Eiserner Steg, that takes you directly into Old Sachsenhausen.

The south bank of the river is called Museumsufer. There are classic and modern paintings here as well as sculpture gardens and occasional exhibitions.

By this time, you might be getting hungry. Fear not, Sachsenhausen has the best authentic Frankfurt cuisine (yes, it exists!). In Frankfurt there are a few dishes you must try and a few drinks you have to guzzle. Without question, get your hands on some apple wine (Apfelwein.) The best place to do this is either right in Old Sachsenhausen, just across the bridge, or a few blocks down on Schweizerstrasse, where the locals gather nightly for Tartarrenbrot and Apfelwein, or maybe a Sachsenhauserplatte (sausage platter)and a glass of Bitburger. 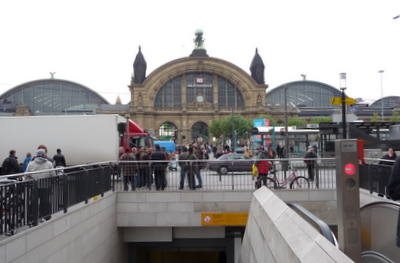 Schweizerstrasse can be quite lively at night and if you walk the length of it heading north, you’ll be right back at the river. You might be looking at your watch and wondering how to get back to the hotel, but its easy here in Frankfurt. If its not too late, the subway runs straight from the Schweizerstrasse stop to Hauptwache, where you can switch trains to the airport or the main train station. If it has been a night of food and drink and the trains have stopped, there is a nightbus that also stops right here and will take you to Hauptwache or the main train station. If all else fails, cabbies are everywhere.

Frankfurt might not have the international allure of Paris or Berlin or even Munich, but there is no reason to stay cooped up waiting for the next flight when you can easily catch the charm of a city in one afternoon.

If you want to stay in the area there is a youth hostel nearby, Jugendgastehaus.

If you are going on vacation to Frankfurt, I can recommend visiting the Ghoethe house. This is the house where Goethe was born on 28th August 1749. It is a typical example of how people lived in the late baroque period. The house was completely destroyed in the Second World War but it was restored to its original condition between 1946-51. Most of the objects that are on display didn't belong to the Goethe family, but they are from the same period. It's also worth taking a trip to the adjoining Goethe Museum, which was recently renovated and contains both a library and a bookshop.