The Cies Islands are a hidden treasure; a 45-minute boat ride from the bustling city of Vigo in the northwestern province of Galicia, Spain, the islands have pristine beaches and rugged cliffs, a network of quiet hiking trails and a stunning coastline. I couldn’t quite believe what I had stumbled upon: my legs stretched out in front of me and my heels dug into the white, velvety soft sand. Ahead of me was an expanse of water so green-blue that I imagined I’d taken a wrong turn and ended up in the Caribbean. Behind me were tall trees with deep green leaves and pine needles scattered on the ground, providing a carpeted trail which lead to this small, deserted beach. In a word- paradise. 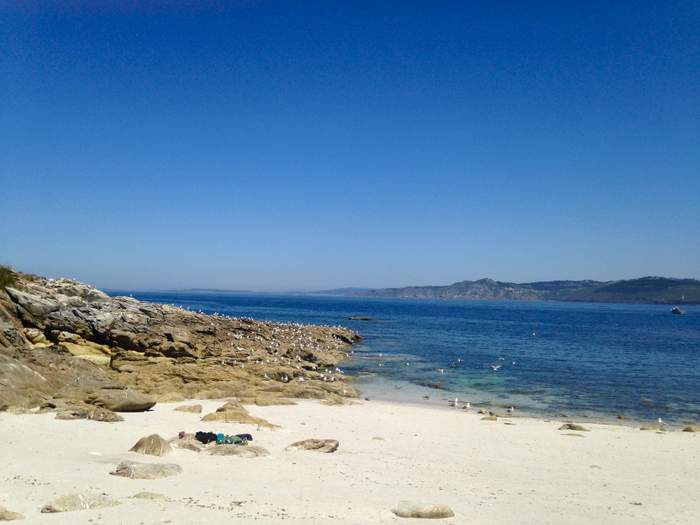 The Cies are an archipelago of three small islands- Monteagudo, Faro, San Martino- and no wonder I thought I was in paradise. Once called “Islands of the Gods” by the Romans, the Cies Islands are now referred to as the “Galician Caribbean” by locals. Monteagudo and Faro are linked by a stretch of sand known as Rodas beach; San Martino is accessible only by private boat.

Here’s the quick back story on how I ended up on the Cies Islands: I’d just finished walking 500-miles across Spain on the Camino de Santiago and had a few days to spare before I left Spain. I was already in Galicia, so I decided to heed the advice of a Spanish friend, who told me that the Cies Islands had the most beautiful beaches in the world (and, indeed, in 2007 The Guardian named Rodas beach the most beautiful beach in the world). Spending a day with my aching feet buried in the sand as I relaxed to the sound of breaking waves sounded absolutely perfect. 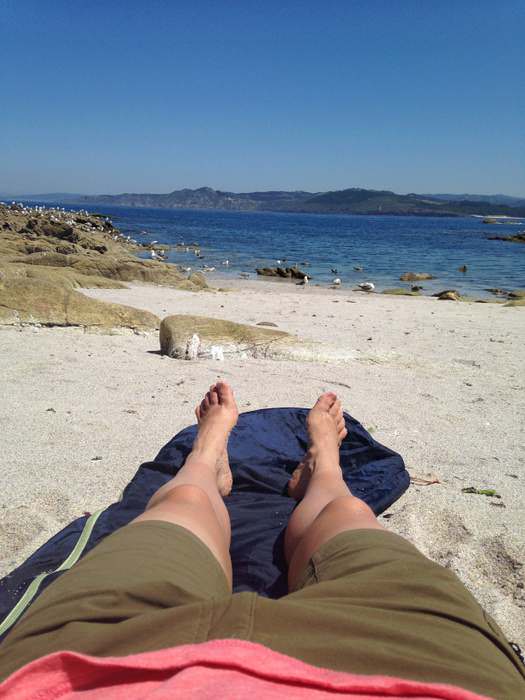 Beach lounging on the Cies Islands

I hadn’t done much research before hopping on the ferry and heading off to the islands, but figuring out the details was surprisingly straight-forward. A trip to the tourist office armed me with brochures on the islands, plus a map of Vigo. The woman at the office drew a line on the map, showing me how to get to the docks, and told me that there were several companies where I could book a spot on a ferry. “I would get on the earliest ferry possible,” she told me. “The islands are so beautiful, you will want as much time there as you can manage.”

It was a good thing I’d arrived in Vigo early in the morning; only 2,200 people are permitted on the Cies Islands per day, and June-August is high season. But luck was on my side and with a ferry ticket in one hand and my maps in the other, I rushed on board a ferry that was about to pull away. Inside the boat I was surrounded by Spanish families toting toddlers and coolers, beach umbrellas and bags of snacks. Looking at these groups, I felt wholly unprepared to spend a day on an island. I had no bathing suit and my microfiber towel was only slightly larger than a washcloth. Half a loaf of bread was crammed in my backpack, along with a few gummy candies, some slightly smashed apricots, and two large bottles of water. I wondered if there would be any places to buy food on these little islands.

I quickly learned everything I needed to know when the ferry dropped us off at the pier on Monteagudo. A small bar/cafe was situated just at the top of the dock, and after stocking up on some snacks and a cold can of coke (all highly priced, so if you have time, I’d recommend shopping first in Vigo and bringing a picnic lunch along with you), I walked a short distance to an information booth and learned that I could hike around the islands. 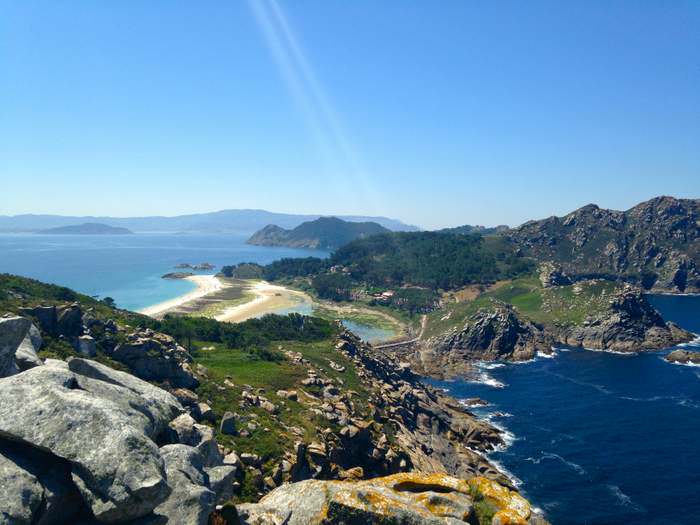 There are four trails that run through Monteagudo and Faro. None are longer than 6km, all are rated as either moderate or easy (I would bring sturdy hiking or walking shoes, as some sections of the trails are rocky). Having time to only explore one island or the other, I decided to veer off to my right, which would lead me deeper into Monteagudo, rather than off to the left, which would lead me to Rodas beach, the campgrounds, and further on, to the lighthouse.

Over the next several hours I hiked both the Monteagudo Route and the Alto do Principe Route, with a stop at a small, deserted beach in between. The islands were named a Nature Reserve in 1980 and given National Park status in 2000, and lot of care has been given to preserve and protect the land. The islands are uninhabited, there are no roads and no vehicles, and even with a few thousand other people on the islands, a walk on the trails makes the place feel like it’s your own private paradise- rugged and unspoiled. I hiked up to incredible and sweeping views, down a narrow path bordered by towering pine trees, and over to the bird observatory where I saw dozens and dozens of yellow-footed seagulls (the Cies Islands are home to the world’s largest colony of these birds!). 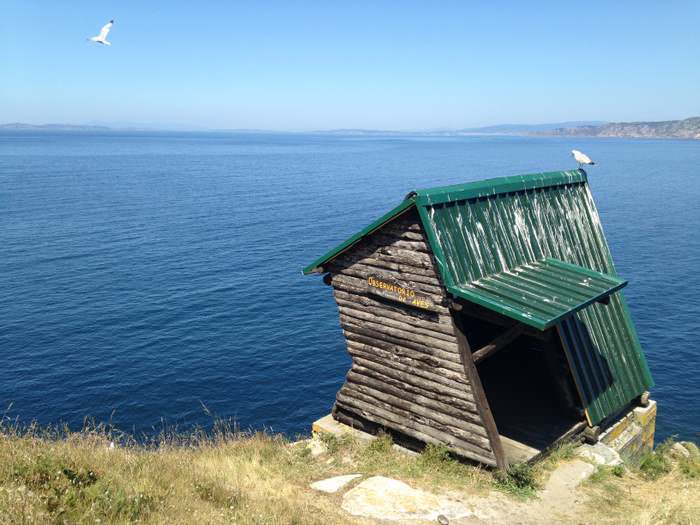 Bird Observatory on the Monteagudo Trail

In addition to Rodas Beach (the most beautiful one) and Figueiras Beach (the nude one), there are several others, some tucked away and hidden. I found one of these on Monteagudo, and this is where I spread out my sleeping bag, popped open my can of coke, and tore off a hunk of bread. The clear, turquoise water lapped at the shore, a slight breeze rustled the trees behind me, the sun shone down on this tiny, private beach and my outstretched legs. I might not have been prepared for a day on an island, but it didn’t matter. I’d just found paradise.

How to Get There:

Book a ferry online or at the port in Vigo, there are several companies to choose from. The trip is roughly 45 minutes and roundtrip ticket prices are from 22 euros for an adult.

Where to Sleep on Monteagudo 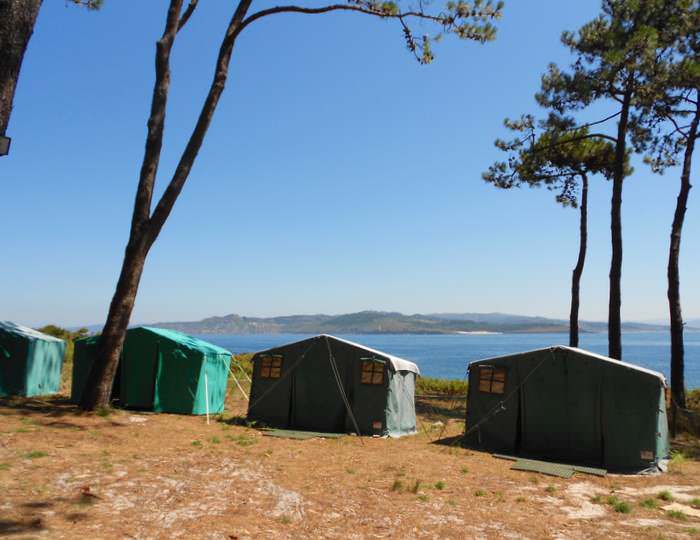 During my explorations of the island, I came across an 800-site campground, where visitors can either pitch their own tent, or rent one that is already set up. It is imperative that you book one of these sites in advance (this can be done online or from the information office at the Maritime Station at the port in Vigo); reservations are first-come, first-served.

Prices for campsites are from 15 euros if you bring your own tent; from 45 euros/day to rent a site with a tent (these tents come equipped with a bed and mattress). Bathrooms and hot-water showers are on-site, and the campgrounds have wi-fi access for a flat fee of 2 euros.

Where to Eat on the Cies Islands:

Visit the bar/cafe at the pier on Monteagudo, or stop by the restaurant at the campgrounds on Faro. There is also a small food shop where you can pick up basic items for your stay.

Written by and photos by Guest Contributor Nadine Karel for EuropeUpClose.com
Nadine Karel is a school counselor in the suburbs of Philadelphia. She likes to spend her summer breaks trekking across Spain, hunting down the best baguettes in Paris, and throwing back double espressos in Italy. You can read more of her travel tales at singlestepcamino.wordpress.com