Killer cheeses. Secret caves. Pagan rites. Pirate raids. These are some of the surprises awaiting a visitor to coastal Romagna — the eastern part of the northern Italian region of Emilia-Romagna, bordering the Adriatic. This area is known mainly for its family-friendly beaches, wide and sandy with shallow coastal waters. But by venturing just north of Rimini, the provincial capital, or by adventuring inland, one can find many other reasons for loving Romagna. And, Romagna is eager to share its rich and complicated history, rewarding for mind, eye, and palate. A great way to explore it by car: Take a look at our Venice to Bologna Italy Road Trip Itinerary.

Pirates, for example. On a recent visit to Bellaria-Igea Marina, a town of 18,000 located about eight miles north of Rimini, we climbed the Torre Saracena, built in 1673 to address the problem of pirates.  It is a squat sober construction surrounded by a small garden embellished with fishing boats, a  delight for visiting children. 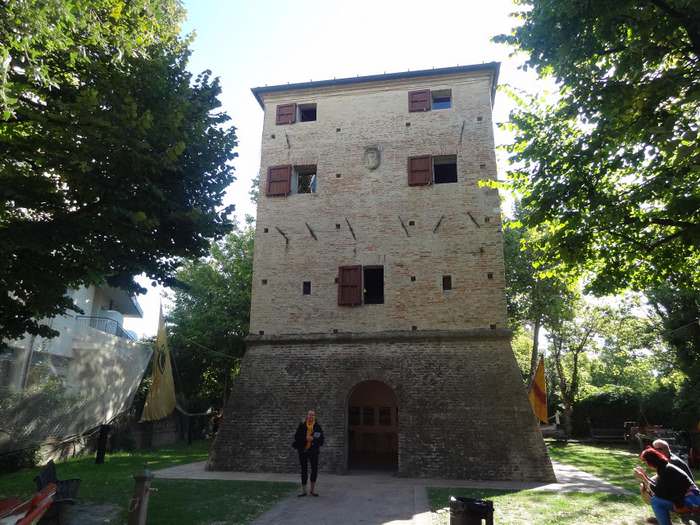 The Torre Saracena in Bellaria-Igea Marina. When built, it was much closer to the sea.

Only two towers remain today of the six-tower network that once dotted the coast around Rimini. Each tower was manned by four or five soldiers, who sounded the alarm if suspicious ships came into view, and communicated with each other by bells, horses, or carrier pigeon. When the pirate problem ended in the 1850s, the towers were used for medical quarantine. One hundred years later, Torre Saracena was used briefly as a customs office.

The sea is not readily visible from the tower’s upper windows today. When constructed, the tower was much closer to the then-coastline, so the view to the sea was plausible. Today, instead of eyeballing the sea outside, you can inspect shells inside: a shell museum has existed here since 1968, when a private donor gave his shell collection to the local government. 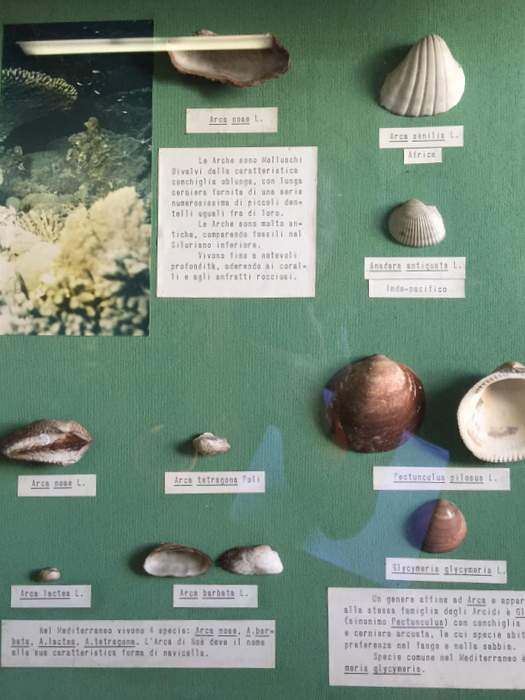 A shell collection that enlivens the upper chamber of the Torre Saracena.

A visit to the tower is free; it is open from mid-May to mid-September, evenings only from 8:30-11 pm daily. Upon prior arrangement you can request an English-speaking guide to explain the tower and its history — a worthwhile investment. If you time your visit to mid-July, the three-day Palio dei Saraceni will surround you with the atmosphere of the tower’s origins. Ten boats disgorge 300 costumed “Saracens” who animate the streets of Bellaria with a choreographed spectacle.

Pagan rites are part of the history of the secret caves of Santarcangelo, the latter a beautifully-preserved historic town six miles inland from Rimini. The mystery begins with the name, Grotte Tufacee Comunali of Santarcangelo, since these grottos are not true caves and are not made of tufo (volcanic rock) but rather of clay and sandstone. Scholars agree that the caves were largely if not entirely man made and were used for wine storage during the Middle Ages, as their constant cool temperature and 90% humidity made them natural refrigerators. Another use was as an escape route for local rulers staying at the Rocca Malatestiana, the castle on the hill. 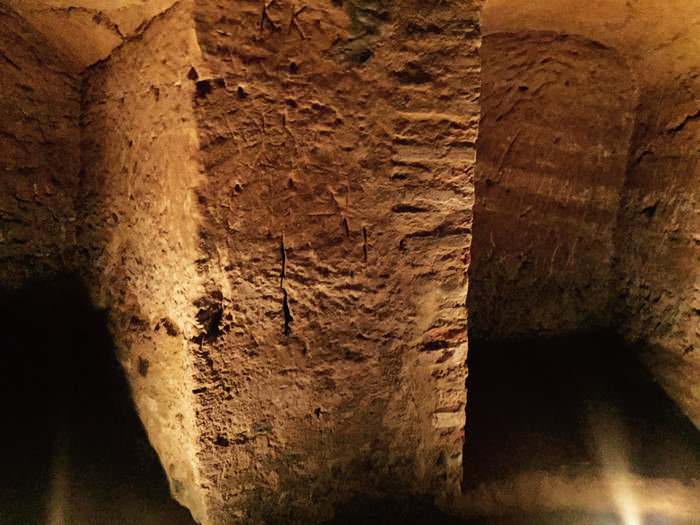 Detail of the mysterious clay-and-sandstone cave of Santarcangelo.

The caves were first mentioned in 1496, but go back much earlier, which adds to their allure. Some of the spaces were used for religious rites, but historians cannot decide whether they were pagan or Christian. The Christian influence is evident today: you are greeted by a set of pillars and arches just inside the entrance transposed from a building in the town’s main square that was constructed in the 18th century when Pope Clemente XIV – born in Santarcangelo — ruled Christianity. Locals may have taken comfort from their presence during World War II, when they sought refuge here during the bombing of the Gothic Line.

The cave-and-tunnel network extends 3.7 miles underground with 152 tunnels connecting the innumerable caves, some of which are privately owned and continue to be used as wine cellars by their owners. The Grotte Tufacee are open all year round with entry for a small fee. There are seven tours daily in the off season, all by prior arrangement.

Fascinating as the caves are, the best way to enjoy Santarcangelo is above ground. Every narrow, winding street and flower-bedecked piazza breathes history. If you scan the cobblestones, you will find markers for some of the 300 hidden granaries scattered throughout the municipality. Residents were forbidden to conserve grain in their homes during the Middle Ages because of rats and plague, so they constructed storage areas outside the homes on the streets. These were hidden by stones and dirt to keep them safe from marauders or overzealous neighbors, but today some of the markers are visible. 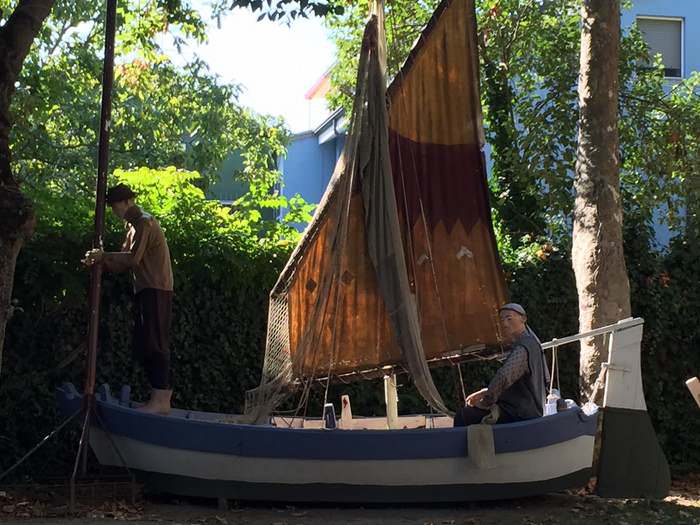 One of six authentic fishing boats in the park around the Torre Saracena.

History can be found in some of the town’s shops as well. The Stamperia Marchi is one of these; it has been in business since 1633, producing and selling hand-printed cotton and hemp linens for the home.  The production process has not changed in 400 years, including the use of natural dyes and hand-carved wooden stamps that the store’s staff is proud to demonstrate to visitors. The high point of any visit is a demonstration of the mangano, the shop’s original wooden wheel used to prepare the textiles before printing. The color rust is the most popular, as it has been for centuries. It is traditional, and its tones come from real rust. 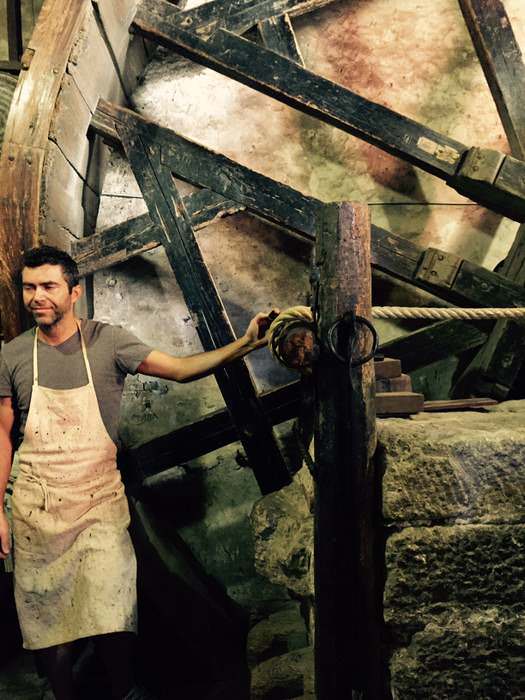 The castle of the once-ruling family, the Rocca Malatestiana, is privately owned and is open to the public once a year. If your visit happens to coincide with that event, take note of the wallpaper. It is the original paper made by Stamperia Marchi for the Malatesta family, back when household items were expected to last for centuries. In that context, the high prices at Stamperia Marchi may be justified when amortized over their probable duration. 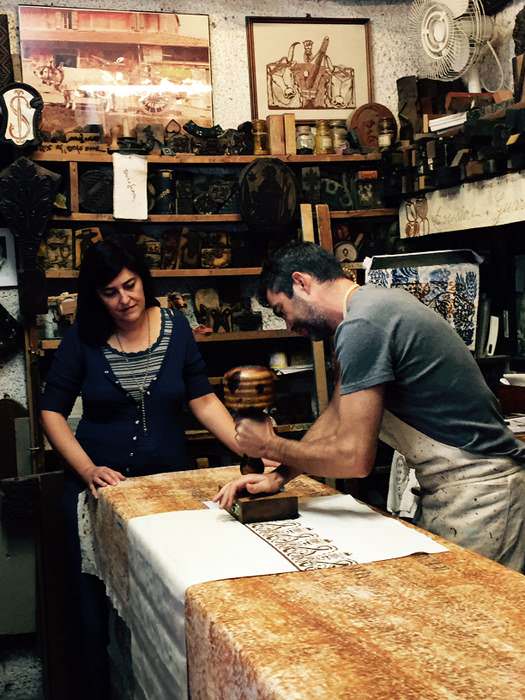 At Stamperia Marchi, printing is still done the way it used to be — by hand.

The Malatesta legacy is intertwined with another distinguished product of Emilia-Romagna – formaggio di fossa (or “cheese from the pit”). This is a cheese made from sheep’s milk, cow’s milk, or a combination of the two, and then “buried” for three months in pits between 13-23 feet deep and about 6.5 feet in diameter. Such pits were used in the time of Malatesta in the same town where they are located today – Sogliano al Rubicone, about 14 miles inland from Rimini. 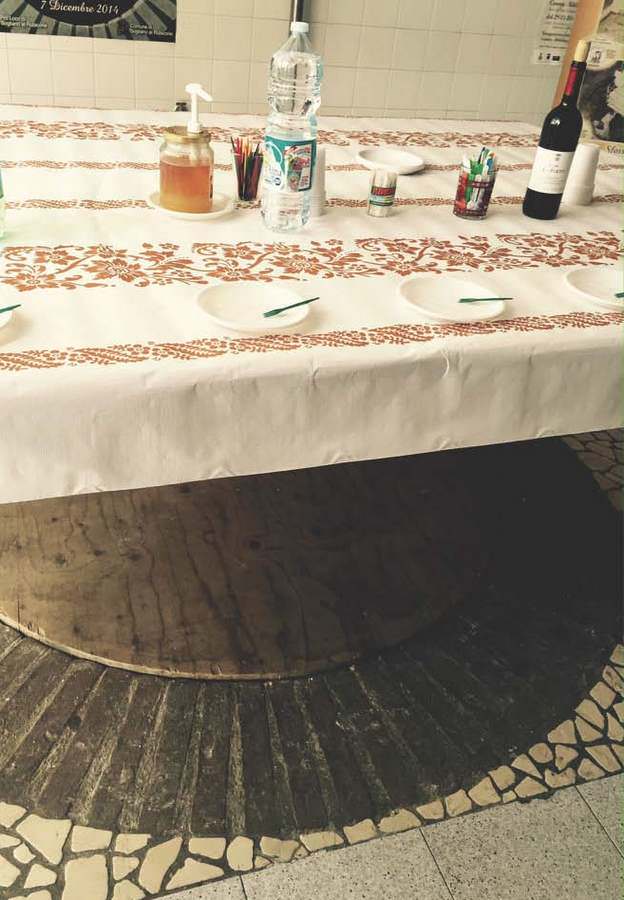 A fossa (pit for cheese) beneath a tasting table.

There are eight fossaturi (pit owners/caretakers) in Sogliano. We visited the largest one, Fossa Pellegrini, which makes its own cheeses as well as maturing the cheeses of others – farmers, merchants, and private individuals. The ripening cheeses range from 600 grams to two kilos each (.1.3 pounds to 4.4 pounds) and producers pay 2€ a kilo for storage from August to the beginning of November. 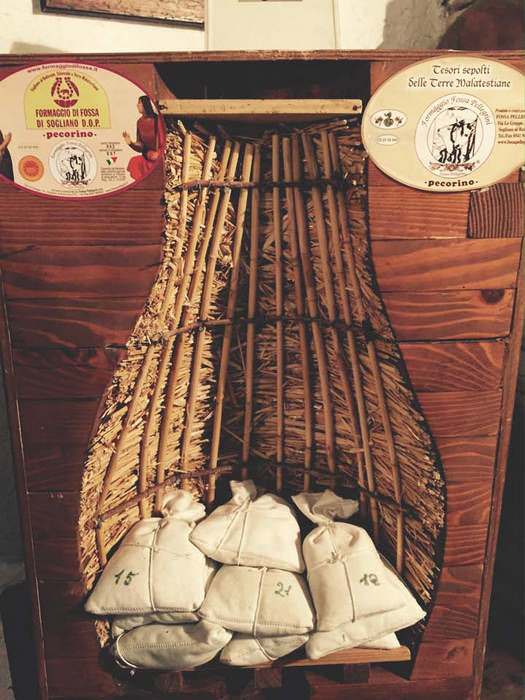 The fosse must be prepared and filled according to exacting criteria.

The work of a fossaturo is specialized and more demanding than it looks. The pits must be prepared in advance: first they are burned internally, then a platform of straw and wood is constructed to hold up to 15,000 kilos of cheese (depending on the size of the pit). The cheeses are put into bags made of hemp, between five and eight cheeses per bag, labeled, and placed in the pit. Then the pit is sealed with plaster, not to be opened till the designated date in November, and then with great care. The ripening cheese produces ammonia vapors that can prove deadly: a member of the Pellegrini family died some years ago from respiratory failure due to ammonia inhalation when he descended too quickly into a pit.

No such dangers for cheese buyers at the Pellegrini store.  What you get are demonstrations, samples, and the opportunity to buy yellow-gold chunks of history.  In coastal Romagna, you can buy history as well as breathe it . . . and bathe in it too, if the beach is your thing.

Twitter: #lovingromagna  and @ertourism
For more information about the sites of Santarcangelo, contact the tourist office at iat@comune.santarcangelo.rn.it.
For an English-speaking local guide in Emilia-Romagna, contact Chiara Antonioli at chiara.ironic@virgilio.it

Written by and photos by Claudia Flisi for EuropeUpClose.com
Claudia visited Romagna as a guest of #lovingromagna in September 2015.

Ms. Flisi has a gift for making the areas she covers come alive for the potential visitor, or anyone interested in the history of the region. Her inclusion of colorful details from pirates to cheese pits conjures a character for the area beyond the mainstream travel brochure. Plus, giving equal weight to the past and the present provides a rich appreciation for this potential tourist destination. I look forward to reading more of her travel posts.