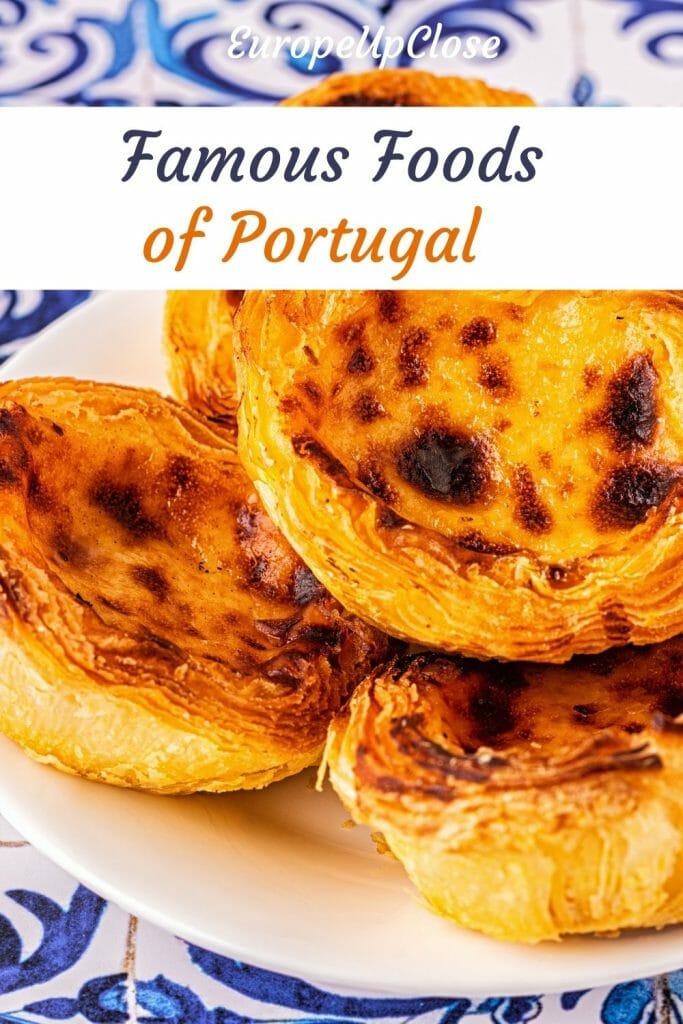 Being a Portuguese and a seasoned traveler, if there is ONE thing I always miss when traveling abroad is my country’s food. I know it sounds a bit pretentious, but I have traveled all around the world and I still believe that in my country, Portugal, we have one of the best culinary scenes in the world. And Jamie Oliver agrees with me, since he has been here not one, not two, but THREE times already! While there are hundreds or even thousands of traditional Portuguese dishes, I want to share with you the most famous food of Portugal. This is why I wrote this guide of the Top 10 Foods to try in Portugal. Being from Porto, considered by many the most beautiful city in Portugal, most of the dishes have northern origins but they can easily be found all around the country.

Usually, people associate grilled chorizo with Spain but in fact, in Portugal, we also have a strong tradition of smoked meats, that are produced all over the country but particularly in Trás os Montes, in the northeast corner of the country, and in Alentejo, a large area in the South.

There are different types of chouriços (the Portuguese word for chorizo) but my favourite one is chouriço assado or grilled chorizo; a smoked sausage made with pork meat and a higher percentage of fat that needs to be melted on fire on a traditional clay pot. It’s genius and definitely one of the top foods to try in Portugal!

For better and worse, if there is one fish that people associate with Portugal is the sardine (even though the Atlantic Ocean constitutes 50% of our border, and hence we eat a huge variety of different fish all year round) and it must make the list of famous food of Portugal.

I believe that happens because in June we celebrate the patron saint of the major cities in Portugal (most notable St John in Porto and St Peter in Lisbon) with fireworks, improvised balls, and… grilled sardines served with roasted peppers and cornbread. It’s delicious!

However, my favourite way of eating sardines in Portugal is actually to order petingas fritas – delicate, small sardines that are covered with breadcrumbs or semolina and then deep-fried. They are so tiny and become so crispy that we eat the whole thing – with head and all. Now don’t play the sick tourist – just close your eyes and eat your petingas fritas while in Portugal!

Another of my top foods to try in Portugal are Amêijoas à Bolhão Pato: delicate clams from the Algarve coast steamed in white wine, loads of onions, and parsley. Usually, I cook it when I visit my parents and I like to add tomatoes (I love the extra acidity!) but it is not in the original recipe.

Now, here’s how to eat it: take each clam individually and suck it into your mouth. Bear in mind that you should only eat the clams that have opened during cooking – those that are still closed were probably not very fresh when they were cooked, and you should not eat them.

When you have finished eating all the clams, take a piece of bread and dip it into the remaining sauce, delighting in its delicate flavors. It’s really worth it!

Dear friends, I have to start this list of the top foods to try in Portugal with francesinha, the most iconic dish from my hometown, Porto.

Between two slices of toasted bread, you will find a juicy steak, wet-cured ham, linguiça (a very salted cured sausage), and fresh sausage. This results in a gigantic tower that is covered in melted cheese and a spicy sauce. The secret is in the sauce, so they say, and it varies from restaurant to restaurant. My favourite restaurant once gave me the (very privileged) opportunity to witness the sauce making and the only thing I can say is that it involves seafood, meat bones, tomatoes, and… 6 different types of alcohol. True story.

Now if you want the real deal, head to one of the best francesinha restaurants in Porto and order a francesinha with a fried egg on top and a Super Bock (our local beer). And no, you should not eat a Francesinha in another Portuguese city – you’ll be at your own peril :P

Portuguese salted codfish is a traditional ingredient deeply rooted in Portuguese eating habits in Portugal since we have been eating this incredibly versatile fish since the XIII century. Moreover, we, a tiny country of only 11 million souls, eat 20% of all cod caught around the globe, with an average of 35 kilograms per person, every single year! True story. So if there is one thing you should give a go on this list of famous foods in Portugal is definitely cod. Any variation, really.

We do have a gazillion different ways of cooking cod but my favourite one is Bacalhau à Brás. The shredded cod is sautéed with onion, garlic, bay leaves, and olive oil. Then you add the straw potatoes (preferably homemade, fried on the spot) and eggs.

Another winning recipe is Bacalhau à Zé do Pipo – sautéed cod loin, covered in a sauce made with onions, garlic, olive oil, and bay leaves. Then, a layer of mayonnaise (preferably homemade) is added on top of the cod while the sides are filled with mashed potatoes, and then everything is grilled in the oven.

If you would like to try cod but don’t want to commit to a full dish try bolinhos de bacalhau – small “cakes” made shredded cod, mashed potatoes, eggs, and parsley, then fried in vegetable oil. I can have them all day!

Now here’s a dish you don’t find on the usual guides of Top foods to try in Portugal – but this is why I, a Portuguese foodie, am writing this article ;)

In the North of Portugal (where I am from), we see animals as a whole so it is possible to find dishes that honor all cuts of meat, ranging from the noblest ones (loin, belly, ribs) to the “inferior” ones (tongue, heart, blood).

Therefore, one of my favourite Portuguese dishes is arroz de cabidela – basically, chicken rice cooked with lots of vinegar, cumin, and… chicken’s blood. I know it may sound like a strange combination, but the vinegar balances the dish with its fragrant acidity, and both the cooked blood and the cumin give a depth that this traditional Portuguese dish wouldn’t have otherwise.

Paired with a full-bodied wine from the iconic Douro Valley and trust me, you’ll be in gastronomic heaven in no time.

If you are vegetarian you should probably skip the part where I tell that one of the top foods to try in Portugal is Leitão da Bairrada. A suckling pig (normally between 4 and 6 weeks old) that’s basted in a paste that’s made from pepper, garlic, salt, bay leaves, and lard and then impaled on a metal pole before spit-roasted over a wood fire. I know it sounds barbarian, but it is delicious, and one of the most traditional Portuguese dishes.

Cataplana is both the name of a traditional Portuguese dish (definitely a must-try food of Portugal) AND a kitchen utensil. Confused? That is right!

Cataplana is a Portuguese seafood stew from Algarve (our famous southern beach region), that is prepared and served in a copper cooking device also called cataplana, which is unique to that region.

As I mentioned cataplana is a beautiful stew with prawns, littleneck clams, and chorizo, slowly cooked on a sauce of white wine and tons of tomatoes, onions, and garlic cloves. It is gorgeous and even if you don’t like the beach (I, most sincerely, don’t), it is worth visiting Algarve just to try cataplana.

Portuguese people clearly have a sweet tooth, with fantastic bakeries and pastry shops popping around every corner of this country. Huzzah!

But probably the most famous sweet from Portugal is pastel de nata, small and delicate egg tart pastries that look like a cross between a custard tart and a cake. The outside is crispy and flaky while the inside is creamy and sweet. Sprinkled with cinnamon and served with a short expresso and you’ll be in heaven.

Pastel de nata is sold pretty much every 300 meters in Portugal (I kid you not), but the best ones are sold by Manteigaria, a pastry shop that fortunately exists in several Portuguese cities.

Pro tip: in Lisbon, you should order a pastel de nata, but in Porto, you should simply order a nata. Add the words “por favor” (please, in Portuguese) and you will be greeted with a warm smile, guaranteed.

Rabanadas is the Portuguese version of French toasts but we do it so much better :P We basically soak old bread (particular varieties of it, called papo seco and cacete) in milk mixed with Port wine, then in egg batter, and then we fry it in vegetable oil. Some people toss sugar and cinnamon on top and others make a sugar syrup with cinnamon sticks but it is delicious either way. There are even some cafés (most notably Guarany, in Porto) that serve rabanadas with a delicate egg custard topped with raisins and walnuts, a comfort to the soul on cold winter days.

Romeo and Juliet might be a British story set on Italian grounds, but for the Portuguese people, it is also a very traditional dessert that consists of slices of soft cheese served with quince marmalade. So simple and yet so delicious!

It is our to-go answer when we are too lazy to cook dessert, but also one of the top foods to try in Portugal.

And, if you want to make it extra special, serve the quince marmalade with the superb Queijo da Serra, strong and creamy sheep cheese from the central mountains of Serra da Estrela.

I decided to include an extra section on this list of the top foods to try in Portugal because if there is one thing that we take very seriously in this country, that would be Portuguese wines. Even though we have 14 demarcated wine regions in the country, the most iconic wine is definitely the Port wine, produced in the amazing Douro Valley wine region.

What differentiates Ports from still wines is that Port wine is fortified – meaning that we interrupt the fermentation process after a few days by adding grape spirit, resulting in a sweet, mellow wine with a high alcohol content (around 19 – 22%).

Even though the English insist on serving Ports as dessert wines, they are actually quite versatile and nowadays there are Michelin star chefs pairing Ports with starters and even main dishes, showing that this Portuguese wine can be your trustworthy companion during an entire meal.

If you want to try Port wines and learn about them, I highly recommend you to visit one of the best Port wine lodges in Porto.

Another option, if you have the time and the money, is to drive to Douro Valley to visit one of the best Port wine producers in the region. If possible, get there during the harvest season (end of August to mid-October), when you will be able to see the grape harvest and all the machines working full speed to produce Ports. It is a wonderful time of the year and its memory is the best way to close this list of famous food of Portugal