Croatia has over 1200 islands, and a day trip from Dubrovnik to the nearby islands or beaches is a great way to get a taste of Croatia’s island culture.  Here’s a guide to Dubrovnik’s islands and beaches: 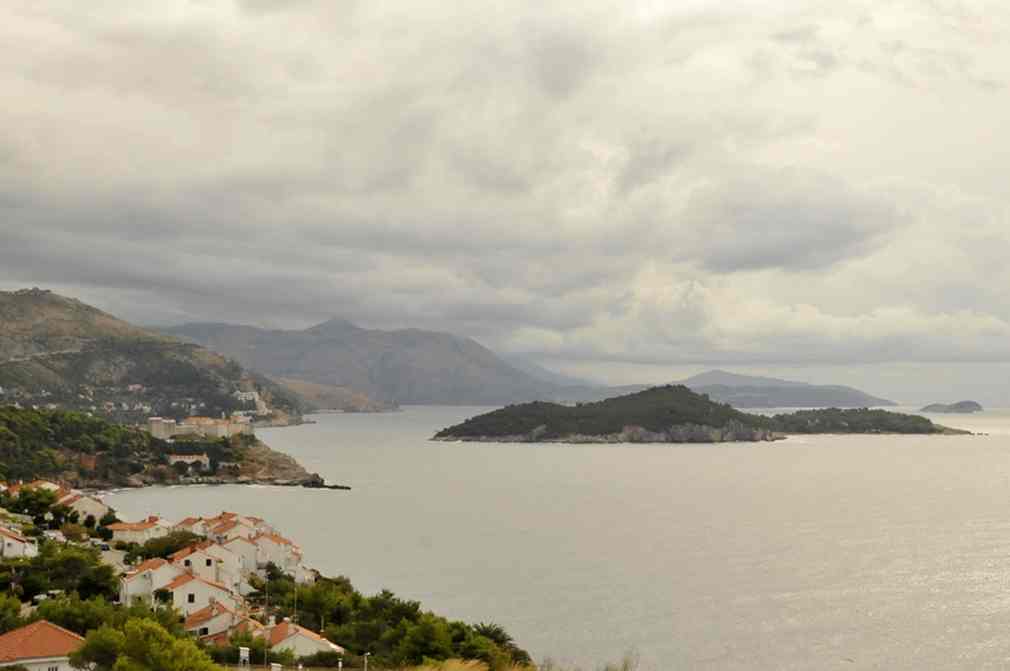 There are plenty of tour companies that offer a variety of packages that include many different islands. You can, however, create your own list and visit the islands independently by taking a regular ferry which costs much less. The most popular islands are Lokrum, which is just a stone’s throw from the Old Town, and the Elaphite or Elaphiti Islands. A day trip to the islands is particularly rewarding during the hottest and busiest summer months, because the islands are both cooler and less crowded than Dubrovnik. Make sure to pack beach shoes to protect your feet from rugged rocks and sea urchins.

Lokrum Island
Lokrum is a nature reserve and the island, even though it touts a couple restaurants, cafes, and other businesses, is uninhabited. It’s famous for its wild peacocks, cliff and rock jumping, and a mini Dead Sea. The “Dead Sea” is a lake that is connected to the sea. Hiking around the island is great fun, especially along the coastal path (watch out, you might stumble across the nude beach on the southeast shore) which takes you to the botanical gardens, and up to Fort Royal Castle, located at the top of the island where you will find great views.

To save time and money, consider packing a picnic instead of going to one of the island’s restaurants. Make sandwiches using the area’s famous smoked prosciutto or simply pick up a couple of the flaky, cheese and spinach-filled pastries known as burek sir.

Ferry: Ferries leave from the Old Port (Gradska Luka) in Dubrovnik’s Old Town. Walk right past all of the tour company kiosks and you’ll see the regular ferry kiosk with tickets that cost 50 kn ($9), round trip. 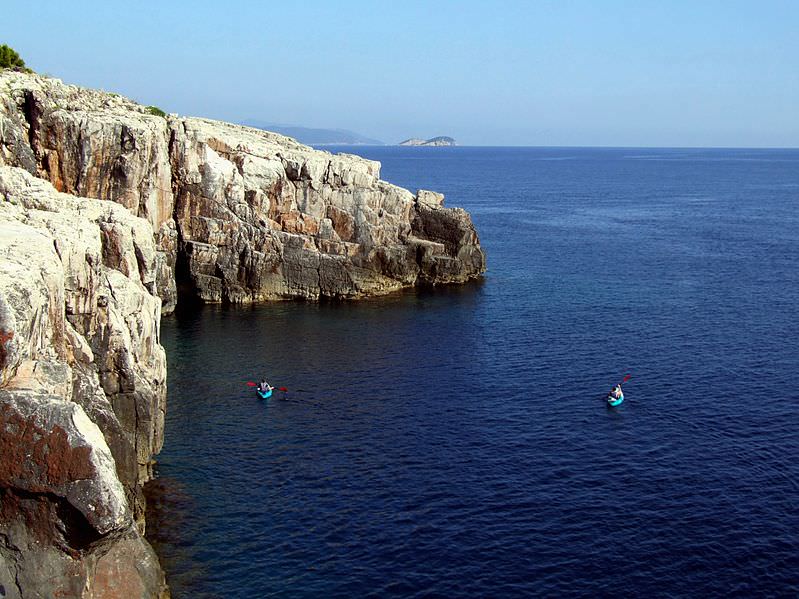 Lopud Island
The small Elaphite archipelago is located just north of Dubrovnik. In my opinion, Lopud is the most attractive of the Elaphite islands because it has a pretty beach, plenty of hiking options, and a harbor that’s fun to walk around and that has good dining options. Two other popular Elaphite islands are Sipan and Kolocep, and though they have pretty harbors, there aren’t as many things to do as on Lopud.

The ferry will drop you off in the harbor, which is a pleasure to stroll through; there’s a good number of Renaissance churches to visit. To aid in hiking, ask for a map of the island at the tourist office. The island’s beach is located on the other side of the island, and is a 20-30 minute walk. Alternatively, you can get a ride on a golf-cart-like buggy (just as in Lokrum, there are no cars). Either way, it’s worth it because the Sunj beach is a beautiful sand ( rather than a pebble) beach.

Ferry: Ferries to this island leave from Gruz Bay, which means you’ll likely have to take the #8 bus from the Old Town to the easy-to-spot Jadrolinija ferry terminal. Just look for the large ferries. Jadrolinija ferry line runs directly to Lopud and tickets cost 20 kn ($3.70), each way.

The beaches near the city of Dubrovnik are usually too crowded to warrant an entire day of beaching. To get in a full day, I recommend heading out to the islands. However, the inner-city beaches are an excellent place for a quick swim or to get in an hour or two of sunbathing. I’ve also included one “secret” beach, which, on the right day, can turn into a secret beach party. It’s important to note that the majority of the beaches in Croatia are pebble beaches. 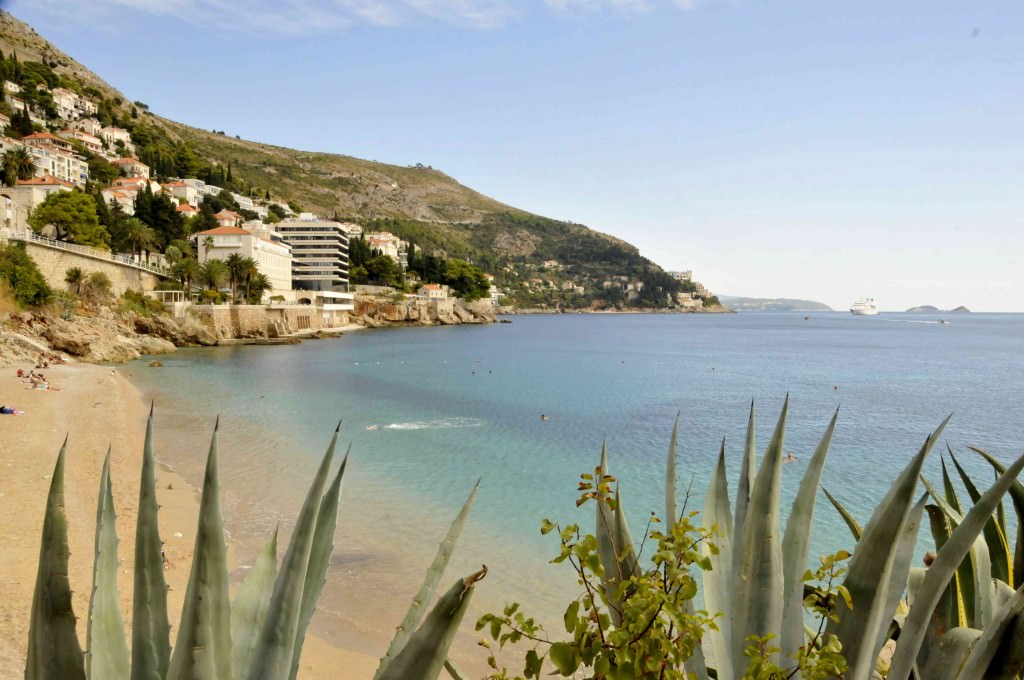 Banje Beach
This is the Old Town’s public beach, and it’s located just a few hundred feet from the Ploce Gate. Usually packed, you might be able to beat the crowds by entering the private portion where there’s a charge, or by renting deck chairs.

Lapad Beach
This large beach is located in the Lapad neighborhood, which is about three miles from the Old Town. This beach tends to get you away from the crowds and it’s an excellent place to watch the sunset. Take a walk on the coastal trail for a better view of the limestone cliffs. 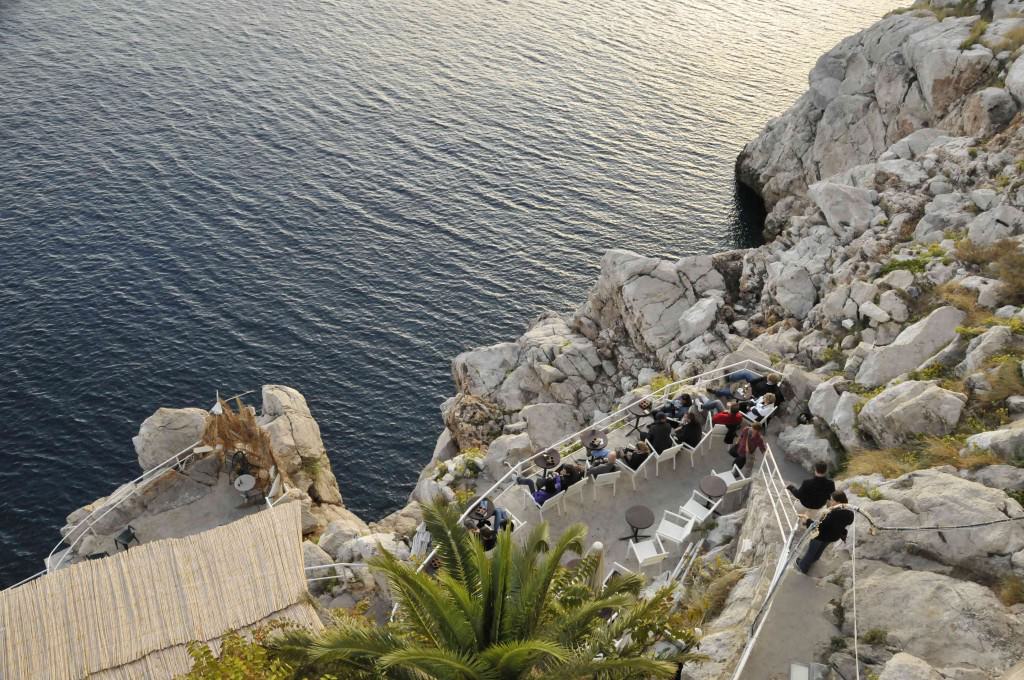 The Secret Beach in Dubrovnik

The Secret Beach
First off, this “beach” isn’t sand or pebbles but a series of flat rocks that spill out from beneath Dubrovnik’s City Walls. The Tabouja Bar is neatly located to one side, so you’ll never run out of cocktails. To access this tiny spot, ideal for sun bathing and swimming, walk up Resticeva street and along Iza Mira street until you see a small doorway in the City Walls. Over the door a carving will read, “Vrata s. Stjepana.” Walk through and enter one of the few hidden locations within the Old Town.

I noticed the "secret beach" while I was exploring Old Town but didn't stop inside for a drink. I had no idea there were so many islands off of Croatia. The one we went to was Island Korcula, it was very beautiful with many vineyards and beautiful beaches. I hope to go back to Croatia someday and explore more islands!

Looks wonderful, I am still trying to navigate around the USA. Hopefully some day I can get to see some of these places.