James turned to the hovering waiter. “Encore, deux cafés.” The big cups of creamy coffee arrived and soon my husband had sketched out a plan for my seventh visit to Paris, his ninety-third. He filled our September week with authentic Paris, must-see places and events that any tourist can fit around the obligatory sightseeing. 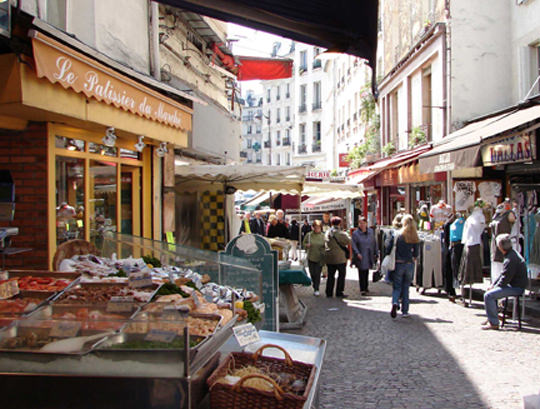 We meandered down the oldest street in Paris, the Roman road to Lyons and Rome. La rue Mouffetard is an eclectic collection of specialty shops that ends in the Square St-Médard.  La Mouffe was bustling with Parisiens gossiping and shopping for dinner. The selection of French delicacies overwhelmed me: displays of food overflowed across the sidewalks and into the cobbled street – wild boar sausage and honey from Corsica, sea urchins and silver sardines, and rich wedges of Roquefort. 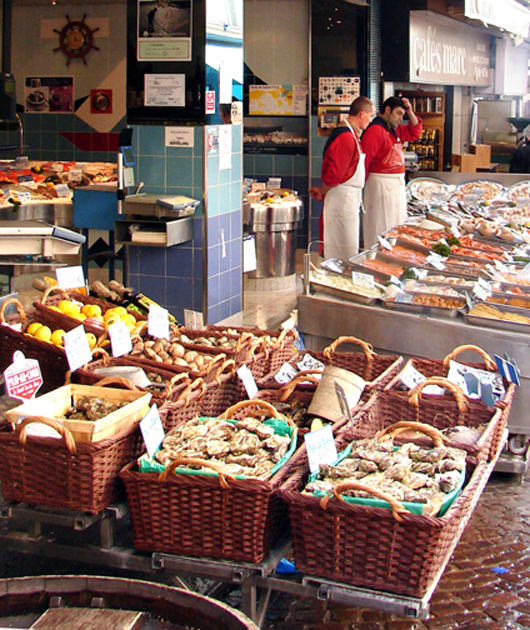 Our mouths watering, we pounced on samples bursting with flavor while I longed for a kitchen. We did load up with olives, cheeses, and a duck terrine for dîner en chambre at our hotel and later bought a decadent dessert from a patisserie. Savoring my last mouthful of lunch in the sunshine, I said, “It’s not hard to imagine what La Mouffe was like in the Middle Ages. Just visualize women carrying baskets full of live chickens!” 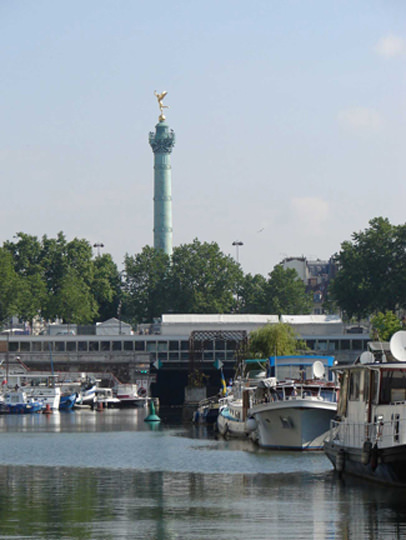 Early next day we boarded a boat to cruise up le Canal St-Martin in the heart of Paris, an adventure few tourists try. The Seine delivered misty views of Notre-Dame to port as the boat entered a lock that led into the Paris Yacht Basin. At the far end, I could just see a black hole – the opening to a 2.4 km tunnel below the Place de la Bastille where the infamous prison once stood.

Napoleon ordered the canal built in 1802 to supply a growing Paris with fresh water and food. His tunnel is an eerie place, musty and cold. With no electricity, it is pitch black too except where light streams through large openings in the roof. I listened for the ghost said to play a clarinet but the echoes were silent; all I could hear was the chug of the engine. 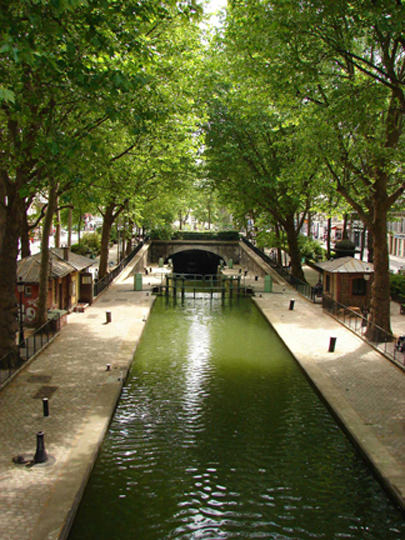 Back in the sunlight again, we entered the residential part of Paris called St-Martin. This old district is now the home of fashionistas.  We glided on jade water under a canopy of trees, listening to an excellent commentary from our guide. Parisiens thronged the banks. Bridges for cars, trains, and foot traffic slid overhead or swung up to let us pass. The boat passed through 19 locks, each with its own keeper, before we disembarked for lunch and a walk along the canal.

We try to be in Paris on a Sunday because that is the day musicians from the orchestras of France play chamber music for an hour before dinner. Not only is the music superb, the location is divine. La Sainte-Chapelle, close to Notre-Dame, is the Chapel Royal of France. Built in 1248 for the saintly Louis IX, it is a double-decker, Gothic marvel. Peeking into the lower chapel, once used by the court’s servants, visitors admire the vaulted ceiling decorated with gold leaf and scarlet, and tiny fleur-de-lis on an azure background. We climbed the spiral staircase to the upper chapel where only the monarch and his family worshiped. The soaring, slender columns and tall, stained-glass windows are elegant and refined. Here the concerts take place amid exquisite acoustics. With mostly Parisiens, we listened to Mozart. Afterwards the notes whispered in our ears as we walked along the Seine at sundown. 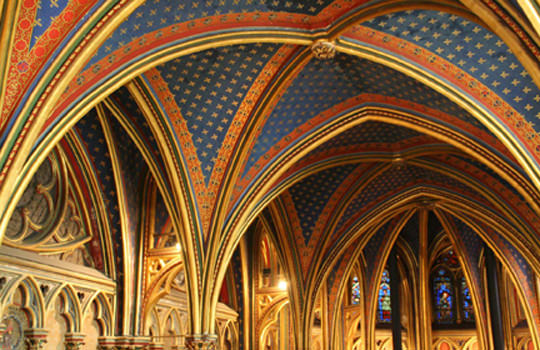 The legendary and largest flea market in the world (7 hectares), Les Puces, had beckoned us for years. We arrived as the vendors were opening their permanent stalls and found the alleyways crammed with antiques, junk, jewelry, furniture, art, clocks – anything saleable, old and new.We rummaged for hours and even found a marble staircase. Our efforts also revealed a “real” Russian tiara, an 11th century suit of armor, and a complete set of vestments for a bishop. I bought antique soup spoons and two pashminas after spirited bartering. By noon, the markets were crammed. 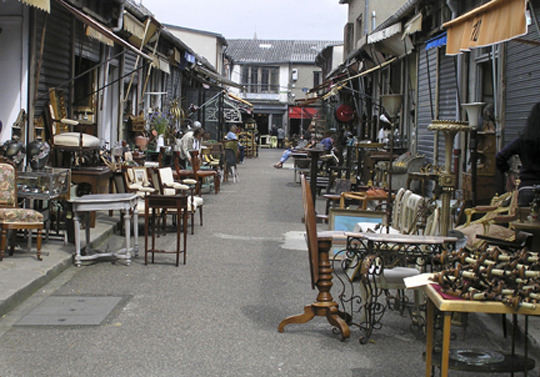 We lunched at the boisterous Chez Louisette where Edith Piaf got her start. This café is tucked in a corner of Marché Vernaison.  Lousiette 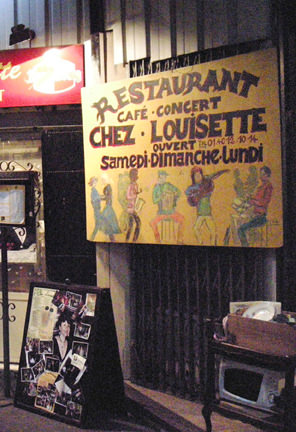 serves mediocre fast food, so this was not why we went. In a corner was a minuscule stage and we listened to a young chanteuse belt out French bar songs and two sets of Piaf favorites. The patrons went wild – yelling, and throwing pieces of baguette at her, the barman, and anyone else who took their fancy. When, at 2:30 p.m., the wine bottles were empty, the food eaten, and the singer gone, we left to find the markets too crowded to enjoy. Besides, we were exhausted.

Our last outing was to the supermarket for foods my husband had promised. La Grande Epicerie is the astonishing food floor of the Bon Marché on rue de Sèvres. As I stood before the deli, my jaw dropped. James had asked me to buy a couple of items for dinner, but I couldn’t choose – the deli section was bigger than my local supermarket. Counters groan with saumon en croute, quiches, boeuf Wellington, 29 different kinds of olives, and items I couldn’t name. Customers wait three deep for a turn to buy. About 350 kinds of cheese grace another section, and hundreds of sausages are in the next. My husband, prowling the olive oils from around the Mediterranean, wouldn’t help. “Surprise me!” he said. And grinned. But it was the patisserie that undid me. I surprised James all right, but with the final bill.

A little Video to give you the flavor of Authentic Paris

Written by and photos by  Julie H. Ferguson for  EuropeUpClose.com