Under the pale light of a full moon, I stand below the great stone ramparts of Caerphilly Castle. Will I see her tonight; the mysterious, ghostly woman who haunts the castle walls? 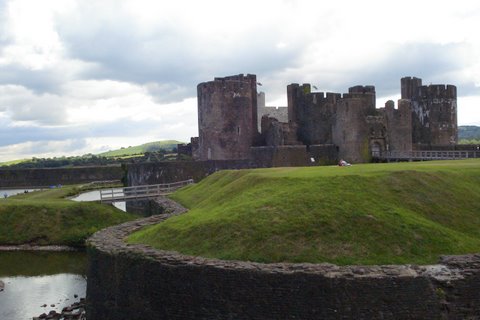 Legends say she is the spirit of Alice de la Marche of Angouleme, France, niece of Henry II, and the disgraced lover of a knight named Gruffydd the Fair. She died of a broken heart after he was hanged by her husband, Gilbert de Clare, Earl of Gloucester, who was lord of the castle. Locals say that on moonlit nights she appears on the walls searching for her lost love. She is known as “the Green Lady”, perhaps because of the ivy that spills over the castle walls, or maybe she wears green because of her husband’s envy.

I have visited Caerphilly many times,  but so far, I haven’t seen the ghost on the wall. I walk along the pathway by the moat, my eyes on the ramparts searching for the fabled Green Lady, but she does not appear. I’ll return again in the morning to visit inside the castle walls. 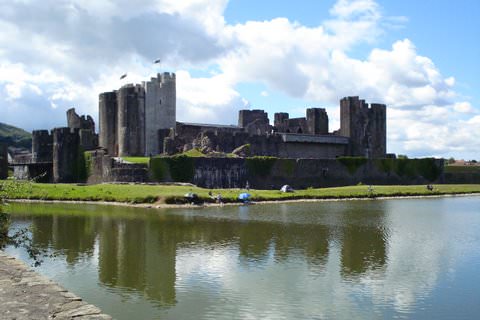 Caerphilly, formerly a mining village just north of Cardiff, Wales, is where my father was born. He used to play in the castle when he was a boy. I grew up from childhood hearing the story of the Green Lady of Caerphilly Castle from him.

Since my father’s childhood, when Caerphilly was mainly a mining village, it has grown, although there’s still a quaintness in spite of the surge of modern development. Overlooking the castle is the Court House Pub which was originally a courthouse belonging to the castle and used for petty criminals until later it was turned into a residential home and doctors surgery. The castle dominates the centre of the town, its formidable gray stone walls seeming as dauntless as they were in bygone years.  A moat, hedged by thick stands of bulrushes, encircles the castle and on the north side there’s a lake, developed in the 1200’s as protection. Nowadays the moat and lake are popular fishing spots. 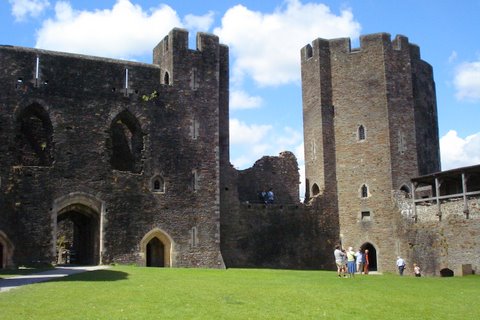 The earliest fortification here was a Roman fortress established about AD75. The area, Senghenydd, is associated with the Celtic saint Cenydd whose son Fili is said to have given his name to Caerphilly (‘caer’ meaning ‘castle’ in Welsh). The first castle was built over the Roman fort during the time of the Normans, though the area continued to be ruled by the Welsh until 1266 when Gilbert de Clare defeated the Welsh ruler, Gruffydd ap Rhys. Five years later, the existing castle was built by de Clare, but fell into ruin over the centuries except for a tower that was kept for prisoners.  The castle was partially restored before the outbreak of  World War II and is now under the protection of the Ministry of Public Buildings and Works. It is a National Heritage site. Caerphilly Castle is one of the greatest surviving castles, covering a 30-acre site. 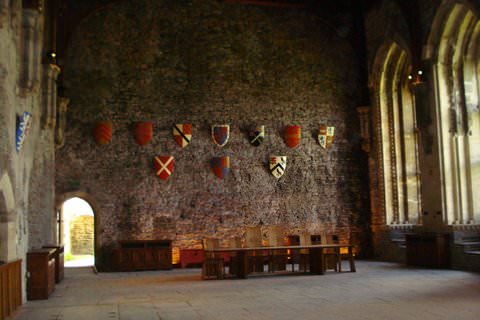 Each time I visit the castle I am pleased to see more restorations and additions. In the outer area there are a number of siege engines on display, demonstrating the types of weapons used in those long-ago days, among them a crossbow and a stone catapult.  Inside the castle are various displays telling the castle’s history.

When I enter through the tall main gate the next morning, I discover that there are new passages open, so I explore up and down the stone spiral staircases that lead to various rooms in the towers. Some are very large and have fireplaces. I imagine that once they might have been occupied by Alice de la Marche and Gilbert de Clare. And perhaps, in one of the secluded, windowless dungeon-like rooms in the lower towers, she held secret trysts with her lover, Gruffydd the Fair, prince of Brithdir.  Alice was known for her beauty and for the magnificent feasts she prepared in the castle’s 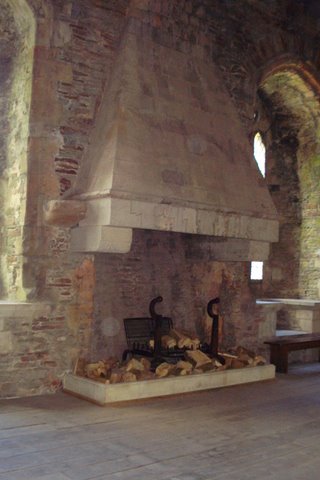 Great Hall. Gruffydd was a frequent visitor to the castle and while her husband was away fighting wars, Alice found love with the handsome prince.

I climb way up to the top of the northwest tower where the Welsh flag with it’s red griffin flies. This is where people claim to have seen the sad, lonely figure of Alice gazing out toward the village of Brithdir, waiting for her long-lost love.

I make my way along a long narrow passageway to another part of the castle. Did the lovers sometimes meet here? The winding narrow stairs go down to the Great Hall where today, weddings and receptions are held. Was it in that hall, perhaps during a festive banquet, that Gilbert found out about her affair with Gruffydd? It was a monk who reported the affair to his master.  Gilbert at once ordered Alice back to France and sent his warriors to track down Gruffydd and kill him. When Gruffydd heard of his betrayal, he had the monk hung from a tree at a place known today as Ystrad Mynach (Monks Vale). Unfortunately, Gilbert’s men caught up with Gruffydd and he too was hanged.

When Alice learned of Gruffydd’s death, it is said that she died of despair. Since then, the people of Caerphilly often see her ghost pacing the ramparts of the castle mourning her lover’s fate. But even though I go back again that night, I do not see her.

For recent news about the Green Lady, click here –  https://www.caerphillyobserver.co.uk/news/38348/caerphillys-green-lady-unveiled/

Great piece of history written as an intriguing story. Myth and fact often entwined making us story telling historians ? Next time we are in Caerphilly I too will keep vigilant for the Green Lady. I will post your lovely piece of writing on the family tree. Diolch ?

I was always told it was called a griffin and at any rate both griffins and dragons are mythical creatures.

Glad you enjoyed the story. I love the castle and I'm still looking for that Green Lady every time i go there!