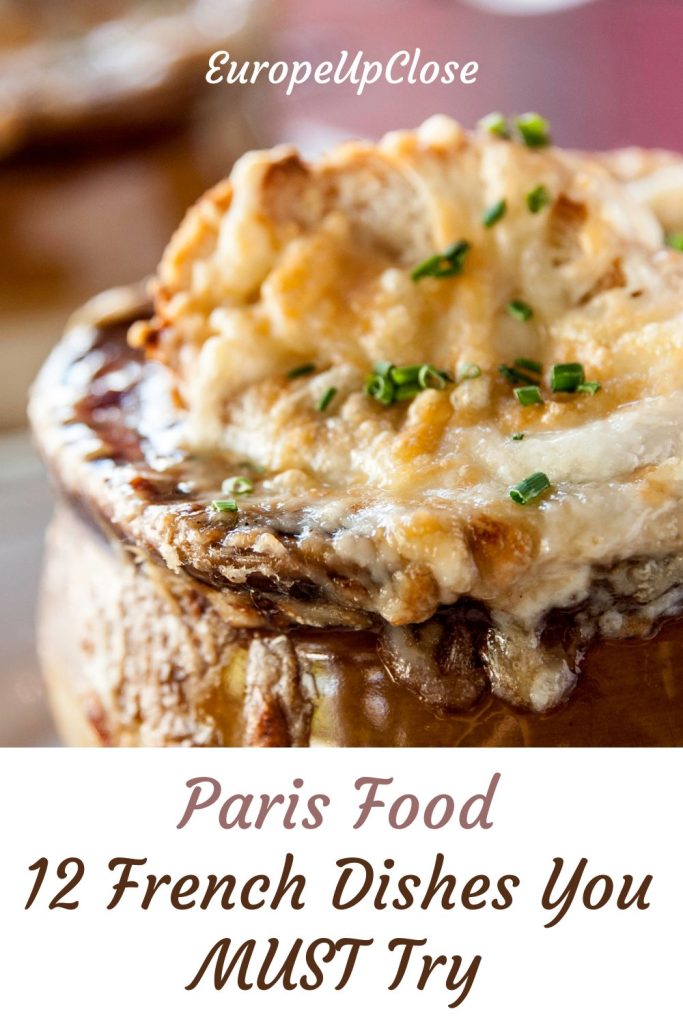 Renowned French chef George Auguste Escoffier once said “Good food is the foundation of genuine happiness.” No wonder the French are so happy.

Food is an integral part of French culture, so it’s of no surprise they enjoy a long and lusty love affair with dining. Food is often at the very top of French conversations.

Who has the best cheese? Which pastry shops carry the flakiest croissants? Which fish market has the freshest seafood? Where to go for the tastiest macarons? Or, what’s the best place to eat duck in Paris? These questions will likely bring lively differences of opinion, as food is quite a passionate topic among the locals. But guaranteed, the French know their favorite palate pleasers, and the places to find them.

When I traveled to Paris this past spring, I had the chance to enjoy the magnificent French cuisine in the neighborhoods of Paris. I also embarked on a Paris food tour led by a culinary specialist introducing visitors to the most popular and well-loved Parisian offerings.

Whether it’s a bistro, boulangerie, café, or street stand, Paris takes tremendous pride in its cuisine. And rightfully so. Paris food is divine!

A great way to eat your way through Paris is by joining a food tour. Take a look at these options here:

So, let’s take a look at the history behind these culinary treasures and pay homage to the delectably traditional French dishes that over the years have tantalized our palates and become some of our favorite indulgences.

Paris Food: 12 Dishes You Have to Try Next Time You’re in Paris

Leave it to the French to transform a slimy mollusk into a mouthwatering signature delicacy.

Though it was actually Romans who introduced the Gallic people to edible snails, it was the French who created the most exciting way to beguile our taste buds with their inventive culinary skills.

I can’t count the number of people who say they’ve never tried escargot as it seemed repulsive to them. That is until they take that first bite.

Parsley, butter, garlic, shallots, and fine brioche croutons are the magic ingredients of this French classic. The snails are topped with this combination and oven-baked in a Gratin dish until the butter is bubbling and the croutons are golden brown. The end result is amazing.

This French appetizer’s history goes back to Mongol warriors of the 13th century who tenderized meat under their saddles, then ate it raw. While that may seem savagely primitive to many, it’s the French who elevated eating raw beef to a gourmet level.

Top-quality beef tenderloin is ground into fine pieces and molded into a round layer, then topped with egg yolk, fresh seasonings, and herbs. Restaurants in Paris all have their unique seasonings and special ingredients, however, tartare is always served with a baguette or crostini. It’s quite a treat.

Former French President Charles De Gaulle once asked “How can you govern a nation that has 246 varieties of cheese?” Well, that was then, and now there are over 400 types ranging from a creamy Brie to a pungent Roquefort.

Honestly, the best way to find your favorite is to taste lots and lots of cheese. After all, you’re in Paris and to the Parisians, eating cheese is as natural as breathing air. Cheese is so highly regarded here that it’s actually a part of the meal with a cheese course traditionally served between a main course and dessert.

Thankfully, my friends and I had the chance to cheese taste on our Flavors of Paris Walking Tour at various cheese shops and marketplaces. We even paired some wines with them. But the best experience was the honor of meeting France’s most famous cheese craftsman Bernard Antony aboard the Viking Radgrid for a cheese presentation. Antony’s top-quality cheeses are carried by many of Paris’ top restaurants. In addition, only his cheeses are featured at state dinners hosted by President Emmanuel Macron.

What a delight to both taste and pair his award-winning creations with quality French wines and learn about the art of cheese making from this master fromager.

Another very popular Parisian appetizer originates from France’s southwestern region. Foie gras, often considered a luxury food is made from duck or goose liver and served as a mousse, parfait, or most popularly a pâté. It’s also one of the more controversial French dishes as the duck or goose is deliberately fattened for its liver, a practice called gavage originating from the ancient Egyptians as early as 2500 BC.

If this issue isn’t a problem with diners, this delicacy can be enjoyed with a fresh baguette or toasted brioche.

I’m not sure if it was the mussels, the Eiffel Tower views, or both. But sitting on the brow of a Viking Cruise River ship and enjoying my steamer of mussels with a dry French wine felt like heaven on Earth. They were fresh, perfectly prepared, easily removed from their shells, and absolutely divine.

The classic French moules marinières recipe includes butter, white wine, shallots, and parsley, served with bread or steak frites (French fries) for sopping up the tasty broth. The French recipes do not add cream to the sauce. I’ve had mussels in many other places, but there’s something quite special about enjoying them in the City of Lights!

This French version of an upscaled grilled-cheese sandwich is made with jambon (ham), melted Gruyère cheese, and a thick white Béchamel sauce. This rich sandwich originated in 1910 in French cafés and bars where it was considered a quick snack. The name comes from the French words croque (bite) and monsieur (mister) and was considered a gentleman’s sandwich, even appearing in a work by French novelist Marcel Proust in 1918.

Today this amazingly popular dish can be found on most French bistro or café menus. The bread is usually a sweeter version of brioche, dipped in egg before being grilled with the ham and either Gruyère or Emmental cheese inside. Though it may be considered a snack or lunch menu choice, it’s definitely a filling and tasty winning combination.

The modern croissant was developed in the early 20th century when French bakers replaced the brioche dough of the kipferl (a sweeter Austrian and Eastern European pastry) with a yeast-leavened laminated combination. Many French believe it was Marie Antoinette, a native of Austria who introduced the kipferl to the Versailles court in 1770 after her marriage to King Louis the 16th. However, historians haven’t confirmed this speculation. In the mid-19th century, the word “croissant” began appearing in dictionaries and other texts around the world.

The perfect croissant (made in the shape of a crescent) is a flaky, tender, and buttery melt-in-your-mouth pastry delight. Because it is made with lots of butter, don’t expect to have butter delivered to your table with your croissants. The French do not eat it this way. Believe me, you won’t need it anyway.

When in Paris, and most cities in France, you’ll find streets lined with crepe stalls and creperies. It’s one of my very favorite French treats, and they are so, so irresistible.

It’s important for visitors to be prepared they are two types of crêpes – one savory and one sweet. The traditional crêpes we’re most familiar with is the latter, made with eggs, milk, sugar, white wheat flour, and butter. The batter is then poured into a thin circle on a griddle or crêpe pan and flipped until both sides are golden brown. They can be filled with sugar and cinnamon, fruit jam or puree, honey, fresh fruit and cream, or other ingredients.

Savory crêpes are thicker, heavier, grey-brown in color, and made with buckwheat flour. They contain mushrooms, spinach, or other types of vegetables.

Few things are as comforting as French onion soup. Even though it originated as a humble peasant dish, the more modern version evolved in France in the 18th century. Today, this rich classic can be found in almost every traditional French restaurant in Paris.

The broth is simple, primarily made with meat stock and caramelized onions. What makes the soup a standout is the croûtes–pieces of crispy baked bread placed on top of the soup and then covered with a generous amount of Gruyere cheese. The dish is finished in the oven, allowing the cheese to melt as the top turns into a golden crust.

We have to say the scent alone of this dish is a siren call for food lovers. Even before the first joyous spoonful!

This savory dish is regarded by many as a symbol of French cuisine. Dating back to Roman times, Coq Au Vin is similar to a stew with large pieces of cut-up chicken, braised and marinated in red wine (typically Burgundy), and cooked with lardons (fatty bacon), mushrooms, pearl onions, and fresh herbs. The chicken is slow-cooked for maximum tenderness and incredible flavor.

It was actually Julia Child who was credited with bringing more attention and visibility to this rustic dish, preparing it twice on her cooking show The French Chef, and including it in her famous cookbook Mastering the Art of French Cooking. If you’ve never tried this succulent plate, I highly recommend it.

The French just adore their duck dishes. And this traditional French dish is not only made with whole duck but every piece of the duck is used to produce the finished entrée. To “confit” something actually means you’re injecting fat and flavor into it, so, yes, this dish will be extra fatty, rich and flavorful, and oh so sinfully good. Crispy-skinned and served with garlicky potatoes, my duck confit was superb.

It’s such a popular French entree that it’s served throughout Paris, in its bistros, brasseries, cafes, and fine dining restaurants.

Forget any macarons you’ve tasted in other destinations. If you haven’t had them in France, you have no idea how good they really can be. To be honest, I never even liked them until I had them in Paris.

Macarons were actually imported from Italy to France during the 16th century by Catherine de’ Medici. The round almond crispy biscuits are made with egg whites, almond flour, sugar, and vanilla pressed together with a variety of fillings like buttercream, ganache, chocolate, or fruit. More exotic creations can include matcha tea, olive oil and mandarin, licorice and rose, yogurt-based grapefruit, or verbena cherry. And that’s just for starters.

Visitors to Paris can indulge in this decadent treat at Pierre Hermé House, a dessert utopia on Rue Bonaparte that showcases the ‘Picasso of Pastry’s’ awe-inspiring creations. Another favorite for chocolates and macarons is La Maison du Chocolate on Rue de Rivioli.

The next time you’re in Paris, you must check out some of its famous Paris foods. Bon Appétit!

Paris Food was written by Noreen Kompanik for EuropeUpClose.