Humans have been developing ingenious ways of killing each other for millennia. Some weapons are simple and brutal while others show a horrifying creativity, but eventually all become quaint museum artifacts. Such are the exhibits in Chateau Castelnaud, a 13th-century fortress high above the 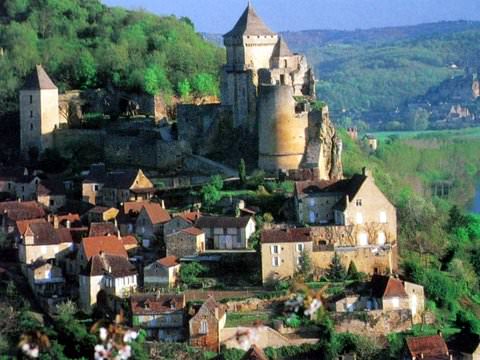 Dordogne valley, in France’s Périgord region, now a privately owned museum of medieval warfare. Castelnaud is extraordinarily well done and worth a tour. I have no particular interest in military history, but I was fascinated.

The chateau was listed as a Historic Site in 1966 and has been open to the public since 1985, extensively renovated to show what life and war were like during the Middle Ages. There are swords and spears, crossbows and cannons, helmets and suits of armor, and the modern touch of interactive computers and videos that explain the action. If you don’t know what a mangonel, trebuchet, pierriere or bricole is, this is the place to learn. It takes about an hour to tour the castle rooms, which include the guard room, artillery tower, the keep and dungeon, the creepy little chambers and twisted staircases. 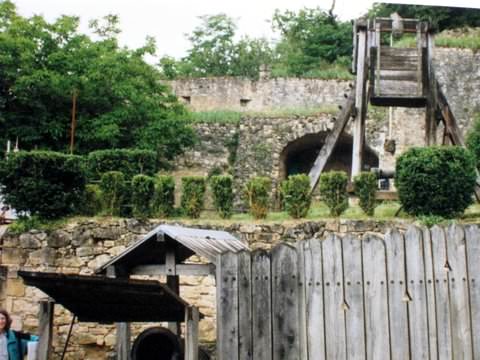 On the grounds outside are full-size reconstructions of siege catapults and other killing machines. When I grew tired of weaponry, I wandered in a reproduction of a medieval garden and admired the magnificent views of the valley, the châteaux of Beynac and Marqueyssac, and the charming village of La Roque-Gageac.

Castelnaud Chateau was a Cathar stronghold until it fell to Simon de Montfort, a notorious leader in the Albigensian Crusade. It was in English hands during the Hundred Years’ War (1337-1453), when France and England fought over the territory, until the French finally won the chateau after a steady 3-week siege. During the 17th-18th centuries, the castle fell into ruins. It moldered away until 1965, when the Rossillon family purchased the castle, had it listed as a historical monument, and took on the work of renovation. Their efforts created one of the 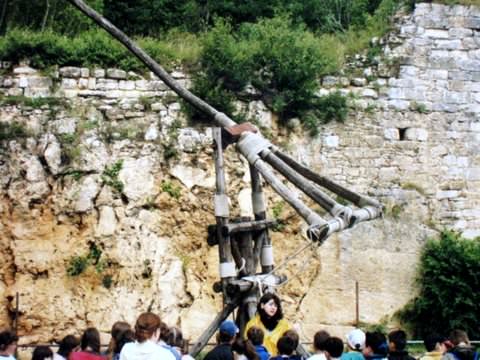 most popular sites in France, drawing about 220,000 visitors a year, many of them school children.

A tour of the nearby Italian-style gardens of Marqueyssac makes a nice contrast to Castelnaud, and so does a ramble through the town of Beynac, with a stop for lunch in one of several pretty cafés. There’s a chateau in Beynac, too, with equally grand views, but it’s much less furnished than Castelnaud.