I ripped open my package from the Isle of Harris. As I pushed my nose into the fabric, it smelled of lanolin and scratched my face. I had chosen it a month before because its color would forever remind me of the heather, sky, and rock that cover this Hebridean island. 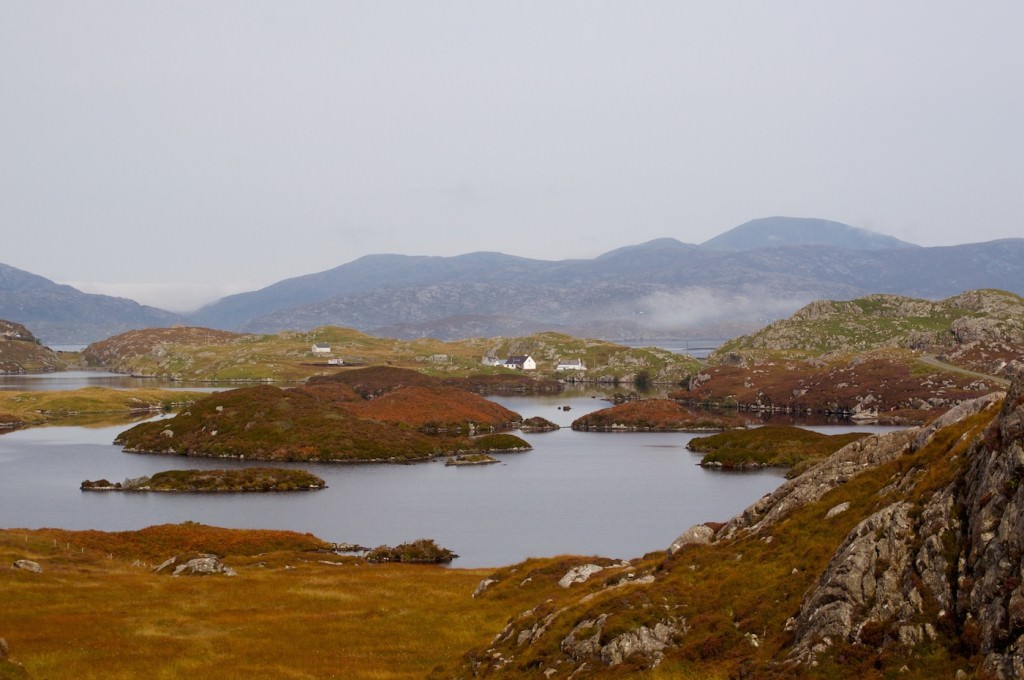 This view from the Golden Road shows the more advanced fall colors in the northern Western Isles in late-September.

The fog was thick as my husband and I awaited the ferry to take us to the most northerly of the Western Isles. This beautiful crossing of the Sound of Harris is tricky in clear weather due to fierce currents, tides, and skerries (uninhabited rock islands) but more so in fog — if we could but see it. We had glorious sunshine for two weeks in the Western Isles, so I said, “We can only hope for some moody photo-ops today.”

Time constraints forced us to choose between the east or west coast route to Tarbert. We were keen to focus on Harris Tweed and the visibility was too poor to enjoy the western beaches, so we drove the eastern route. 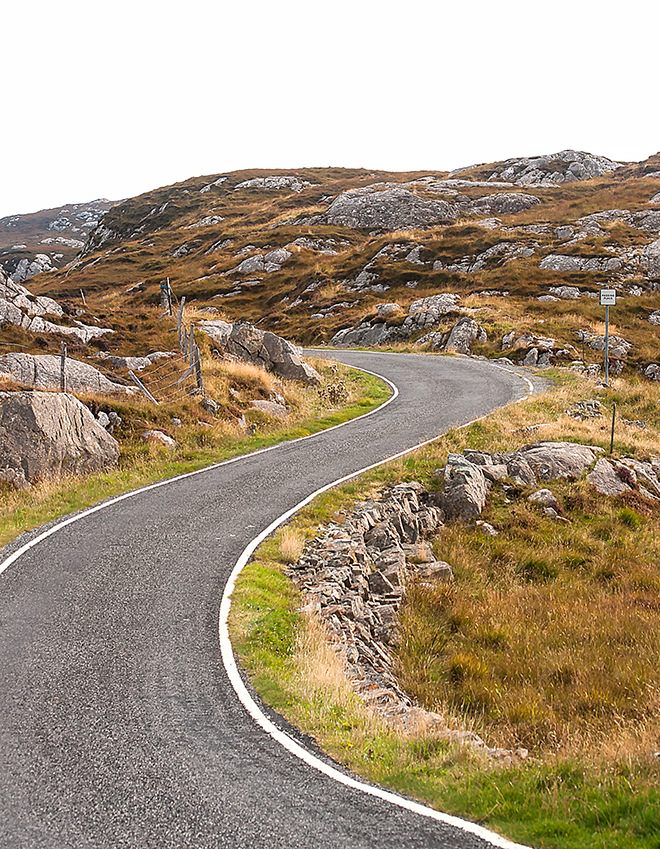 The Golden Road on the east coast is named after the high cost of its construction that linked the isolated villages.

The Golden Road through The Bays is single-track and winds tortuously around massive hunks of granite and through tiny settlements beside narrow inlets. I rarely got out of second gear and the fog forced me to use GPS to anticipate which way the road would turn on blind corners and hills. 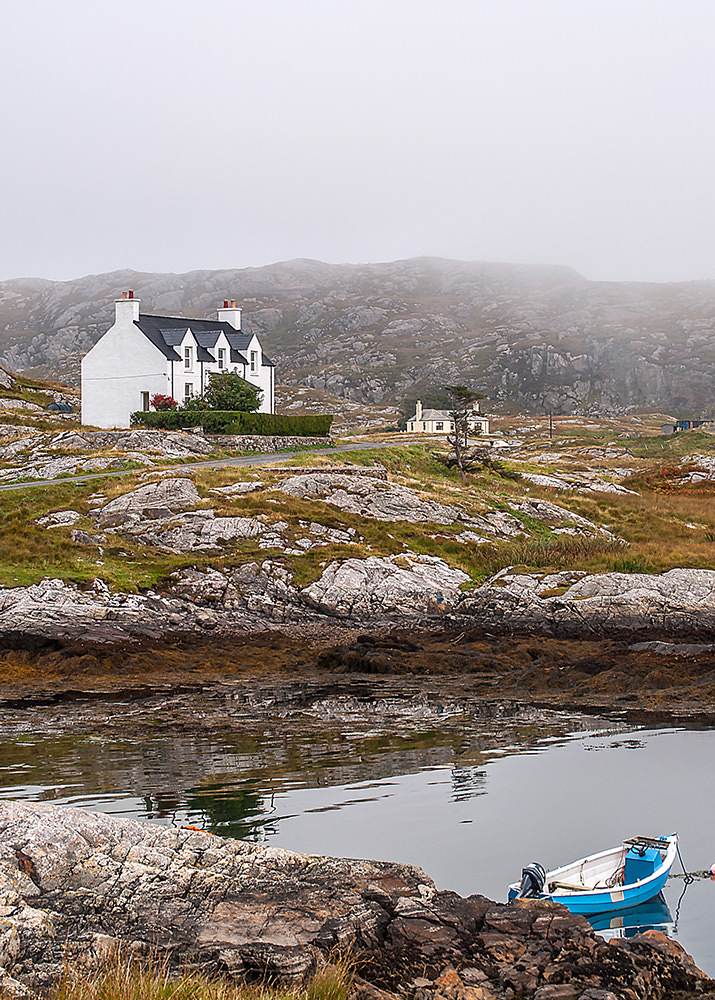 As the fog dispersed we saw a typical inlet of The Bays region on Harris’s southeast coast.

Harris is joined to the Isle of Lewis and a dramatic contrast to the Uists in the south. Mountains rear up in the centre, lochs penetrate the eastern side, rounded rocks of Lewisian gneiss (granite) pepper the rolling landscape, and trees are non-existent. When the fog dispersed, we encountered the free-roaming sheep bred for their wool.

Our search for Harris Tweed led us to tiny Grosebay. The first two outlets disappointed us with high prices and little choice, so we drove further. In Drinishader our quest was rewarded at the Harris Tweed and Knitwear Shop and Exhibition in the Old School. The store was crammed floor to ceiling with tweed in all its forms – from hats to kilts and even dog coats. But it was the colours that mesmerized me. The natural dyes echo the subtle palette of the islands —granite greys, bracken rusts, heather mauves, and highland greens. 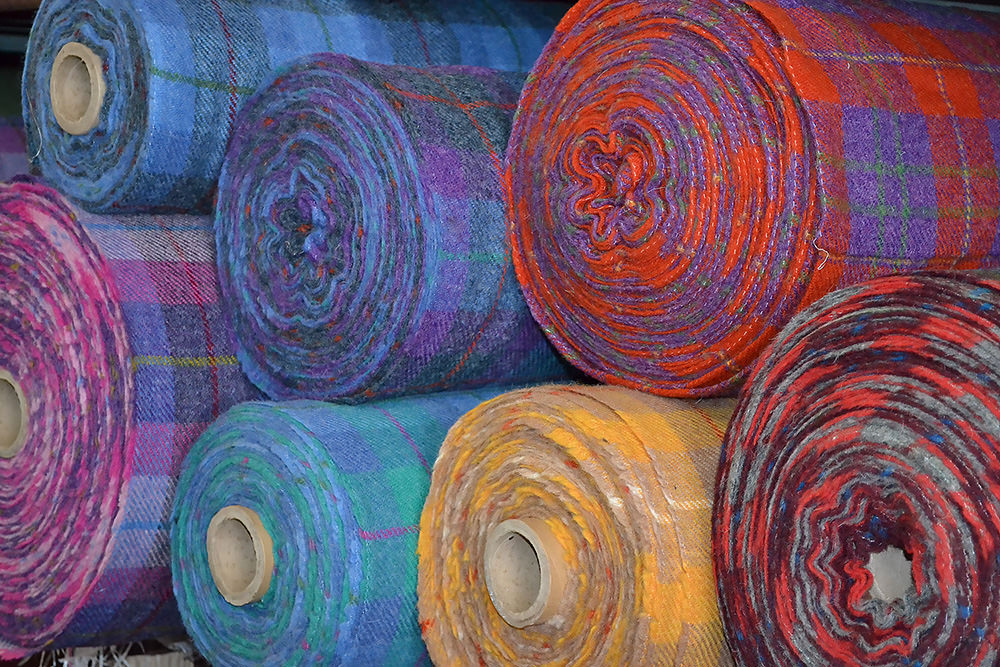 Harris Tweeds are not all subdued; they weave vibrant colors too. Courtesy: Harris Tweed and Knitwear.

I settled on a wee kilt for my granddaughter. The jacket I fell for was not available in my size but, after a phone call, the clerk said, “Aye, they have your size in our Tarbert store. It’s on hold for you.” 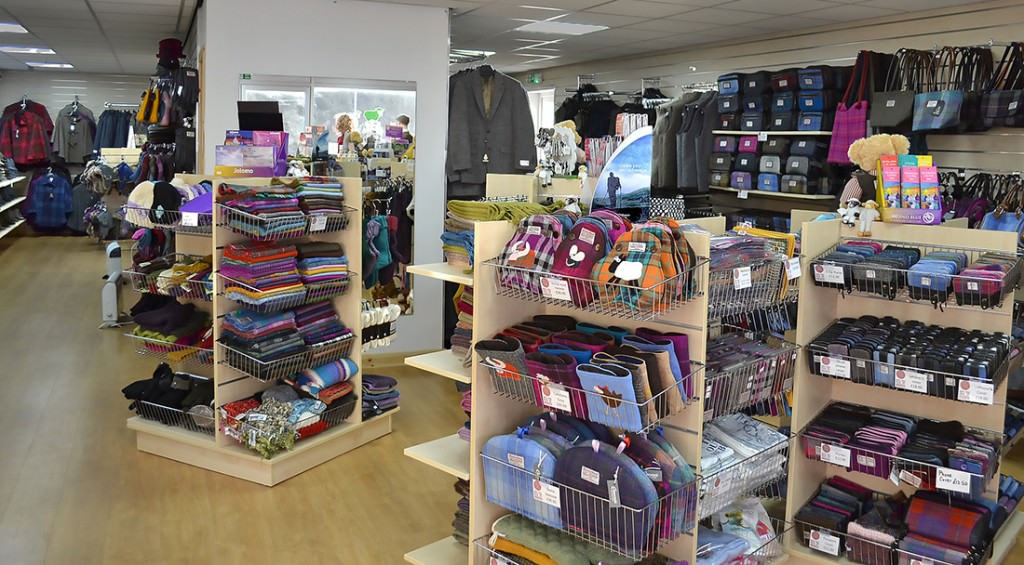 In Drinishader, I learned the history of Harris Tweed. Originally the islanders did the entire process at home — the washing, carding, dyeing, spinning, washing, and weaving. But by the mid-1800s, demand had outstripped supply and all but the weaving was mechanized. An Act of Parliament in 1993, protects the tradition: “that all Harris Tweed must be hand-woven by the islanders in their homes…. in the Outer Hebrides.”

Today the raw wool is washed, dried, and dyed into one of the thirty-two base colours at a mill. They create the final shades by mixing exact proportions of base colours. After this the wool is carded and teased by a special machine over and over again until the fibres lie parallel and can be spun into thread ready for the weavers. 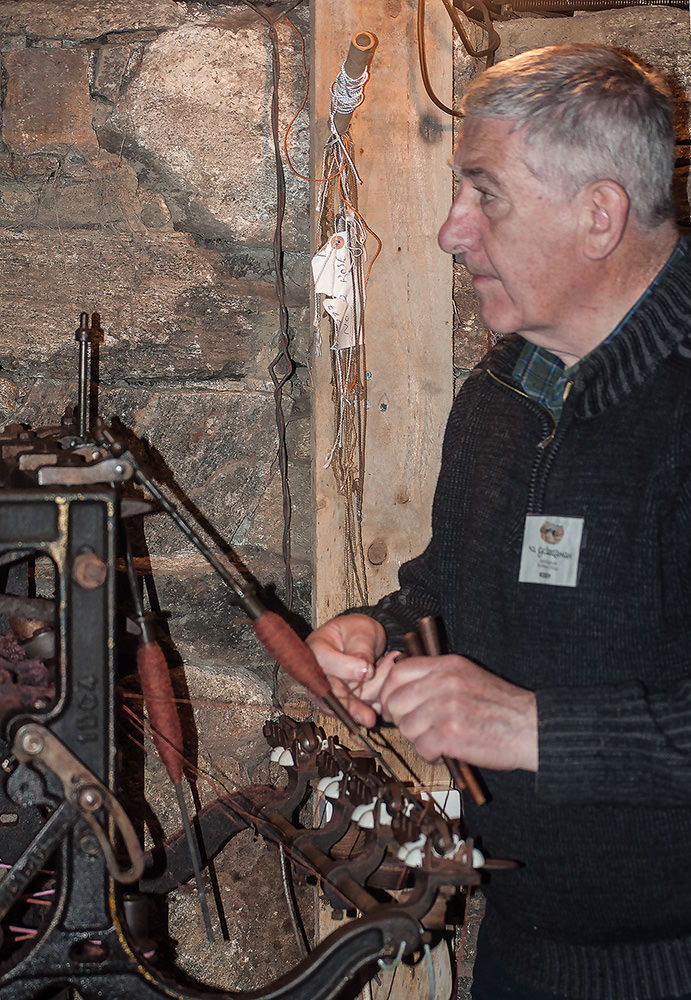 A machine that superseded spinning wheels before the mills took over this task for the weavers, Gearrannan’s Blackhouse Village.

By law, the weaving has to be done by human power. After setting up the huge looms, a complex and time-consuming process, the islanders operate them with pedal power like riding a bike. The final bolt of tweed then returns to the mill for quality checking, washing, and waulking.  The latter softens and thickens the tweed. Now the fabric is pressed, checked for the last time, and stamped with the Harris Tweed symbol before distribution. Every item made of Harris Tweed also displays a label and serial number certifying its authenticity. 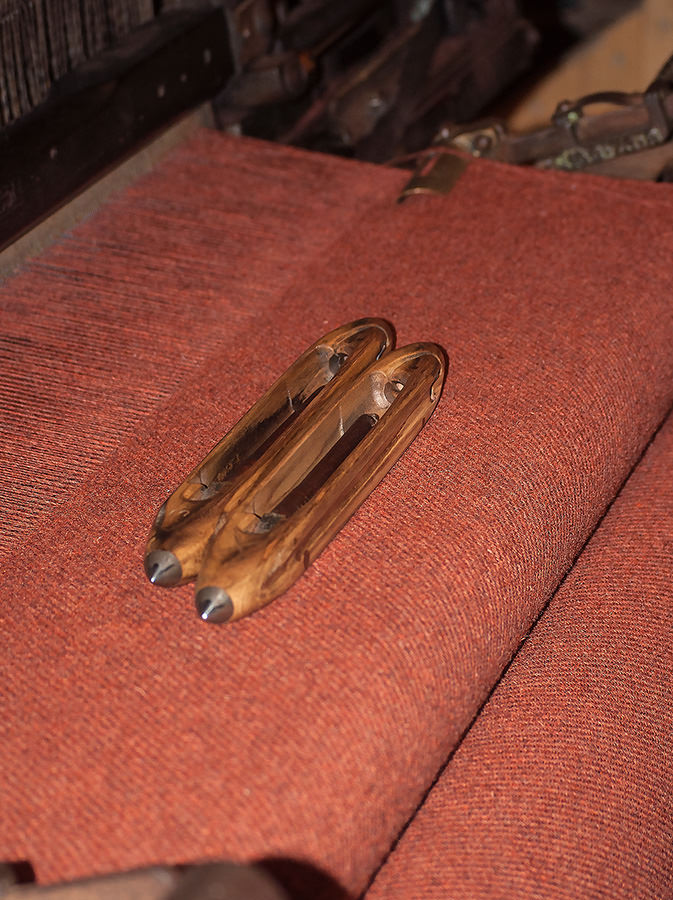 This tweed mimics the color of early fall bracken.

My jacket, evocative of heather, was waiting for me in Tarbert and it fitted perfectly. I had dreamed of buying one for so long, I was reluctant to relinquish it for shipping. Harris Tweed is not cheap and our visit to the exhibition had taught me why. But tweed is so long-lasting, my daughter will probably inherit my jacket.
m
We turned the car onto the main road heading for Stornoway, our last stop before heading to Iceland. The drive through the brooding Harris Mountains and glens offered panoramic views and sheer drops of 1000 feet. As we descended, the landscape levelled off and we knew we were on the Isle of Lewis. Here peat is king. The central moorland is criss-crossed by trenches where peat is still dug for fuel.  Stornoway in northeast Lewis is a delightful town with a large natural harbour and proved an excellent hub from which to explore Lewis. 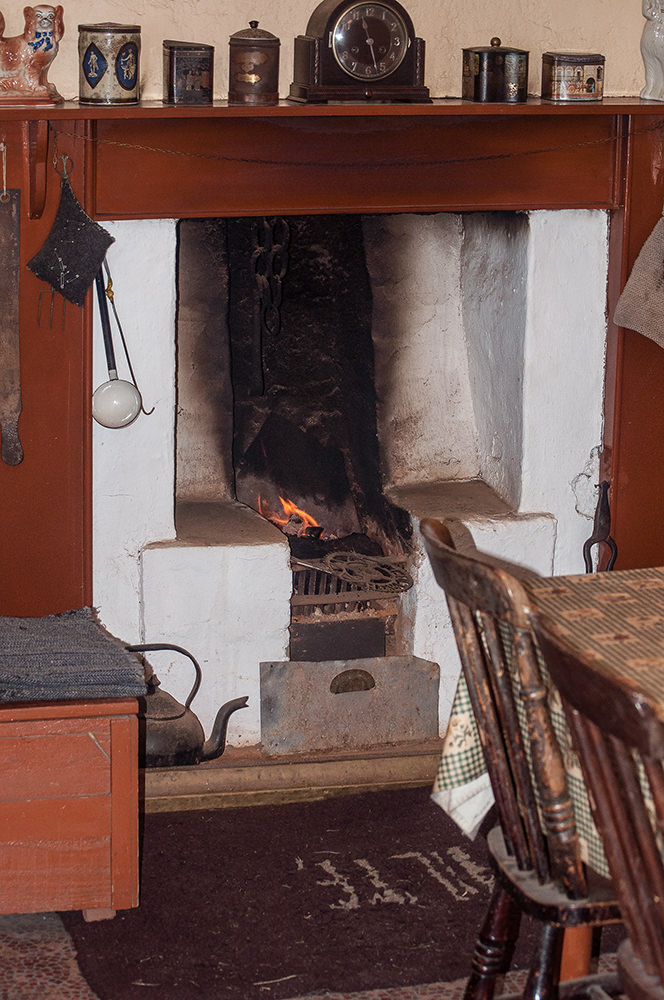 The interior of a blackhouse about 1955. Peat burns hot and slowly, heating the stone walls that radiate it back into the cottage. Long ago, cooking was done over the fire

Our final adventure in the Hebrides focused on history and mystery. Lewis’s northwest coast is home to the 5000 year-old Standing Stones of Calanais (pronounced Callanish) that are the best preserved prehistoric circle in Europe. Their true purpose remains a mystery to archaeologists and historians. 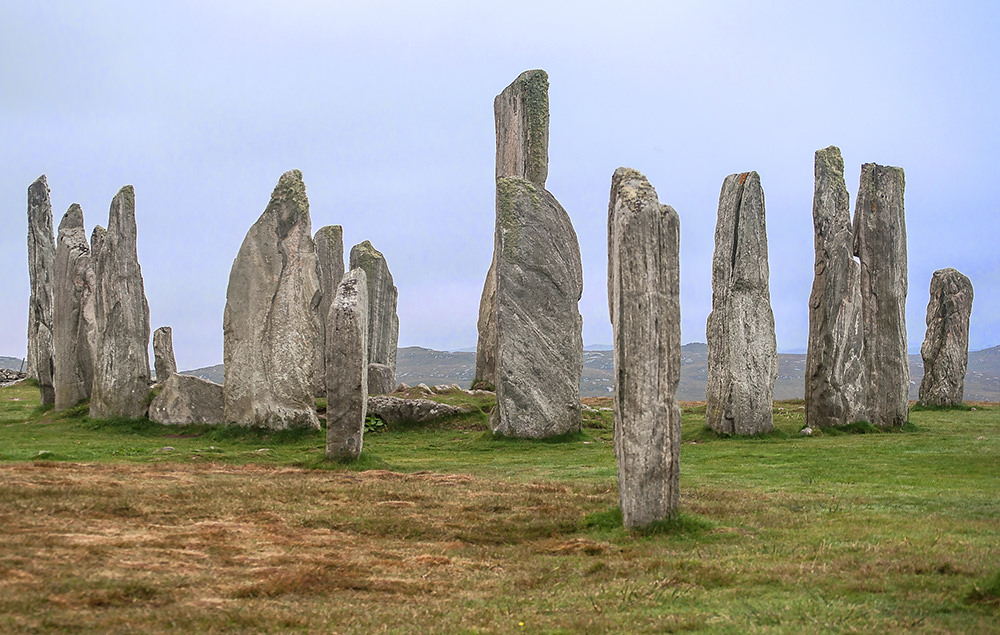 In high season the main circle of the Calanais Standing Stones is fenced off for visitors, but at the end of September we wandered freely among the stones. In the centre is a chambered cairn (tomb) that was added later, maybe 500 to 700 years after the circle was built.

The sun was trying to break through marine cloud when I first glimpsed the stones and the sight left me spellbound. More stones radiate from the circle to the north, south, east and west, and the site commands glorious views of the surrounding countryside and Loch Roag. What stories they could tell us! The Standing Stones were undoubtedly a centre of power for the ancients where the sky and sea, sun and moon, and stars influenced their lives. The mysticism still radiates today.

Following the road north we took a lane to the coast and stopped at Gearrannan’s Blackhouse Village nestled by the sea. 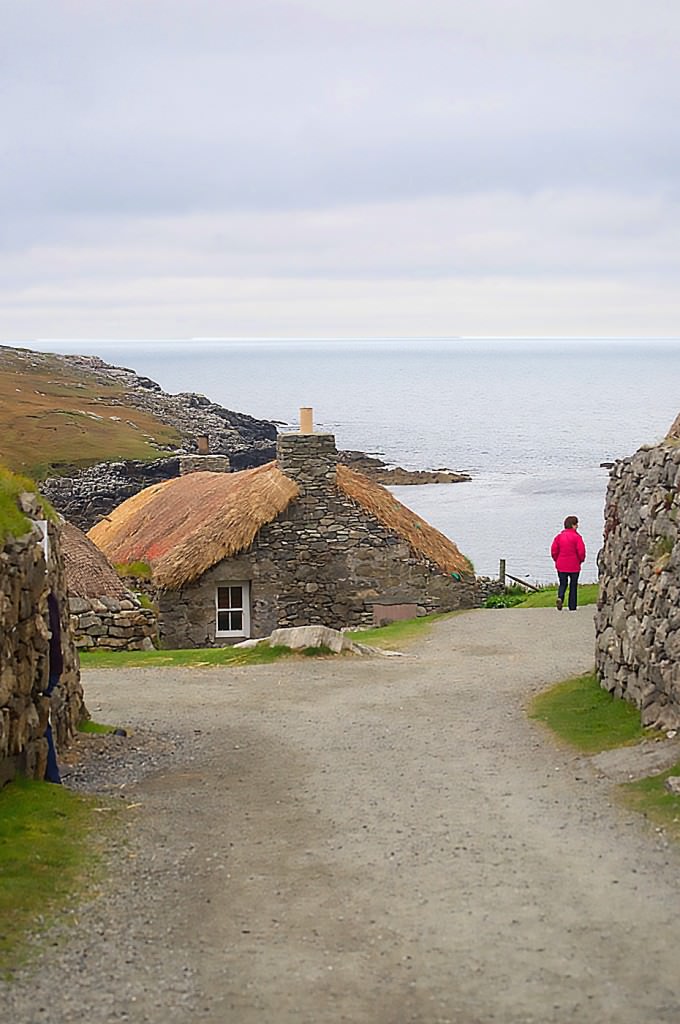 The restored blackhouses at Gearrannan are all below grade and thatched with straw and reeds held down by the mesh from fishing nets and stones.

The nine-house, crofters’ settlement, now restored, dates back to the 1800s. Today visitors can stay here in a youth hostel or self-catering blackhouses with all modern comforts, eat in the café, and enjoy coastal walks. One blackhouse has been recreated as it was in the 1950s when over twenty weavers lived here working their crofts. 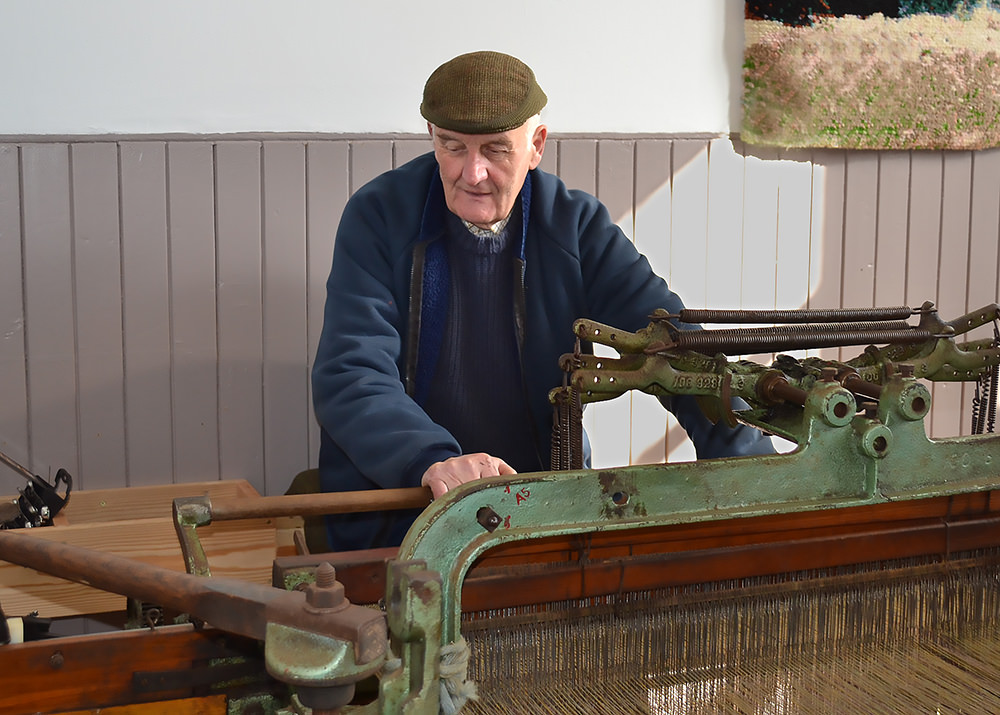 The pedal loom demonstrates the weaving process. It clicks and clacks as the weaver pedals and takes about thirteen hours to finish a complete bolt. Courtesy: Harris Tweed and Knitwear

I stepped down inside it and smelled the pungent aroma of burning peat. The blackhouses are surprisingly warm and cosy under the thatch, but small, and are connected to the byre where the livestock wintered. Today the byre is used for the spinning and weaving demonstrations. Here too I heard Scots speaking Gaelic as their first language.

Now that I’m home, I wear my Harris Tweed jacket at every opportunity — the rain in the Pacific Northwest doesn’t faze it one bit — and reminds me of the Western Isles.

Written by Julie H. Ferguson and photos (unless otherwise noted) by Photos by Pharos for EuropeUpClose.com

I much appreciate your kind words, Patti! Big TY....

Your article and the accompanying photos make a great invitation to all who get a chance to review it. Sun and Scotland in the north may not be seen together often, but when one sees the north in the sun - it's unforgetable as the mood of your article so clearly reflects.

Thank you, Mallee. The Hebrides are stunning and difficult to leave. I hope to go back.

Can see why the houses are made of stone with the beautiful rocky landscape. Love your pics. What an unforgettable trip.

Thank you for your kind words, Marsha. My three weeks in the Inner and Outer Hebrides were a highlight of my travel life. If you haven't been, I recommend you do. J.