Ten years ago, if one visited the quaint village of Roslin, a short bus ride out to the outskirts of Edinburgh, one could tour the local chapel by simply inquiring with the caretaker to obtain a key and letting yourself in.  In 2003, Dan Brown published the DaVinci Code, and everything changed. 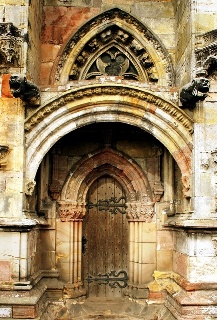 Suddenly Roslin was swamped with tourists and Rosslyn Chapel was inundated with visitors eager to explore the same journey as those individuals in the book.  However, it is important to note that much of the information in the book is historically inaccurate, particularly with reference to Rosslyn Chapel.  The chapel’s actual story is far more interesting, though, and the building today still guards many secrets that have yet to be understood.

The chapel’s actual name is the Collegiate Chapel of Saint Matthew and was built in 1446.  The building you see today is incomplete, as a further section was to be built in the now back side of the church which would have contained the actual chapel. The chapel as-is flourished despite continued friction between the Roman Catholics and the Reformation, until 1688 when a mob ambushed the chapel to destroy its furnishings.  As most chapels in the area were burnt to the ground or demolished, it is one of the few that has survived relatively unscathed.

The church remained abandoned and empty until the beginning of the 19th century, when repairs were undertaken and the 3rd Earl of Roslin, James Alexander, decided to reopen the chapel for Sunday services.   Minor repairs continued over the years and the chapel remained open, until a most grievous mistake was made.

In 1950 the decaying masonry was coated with magnesium fluoride, a concrete-like substance intended to keep the damp out of the stone and preserve it for future generations. Unfortunately, the coating had the opposite effect, not only masking the magnificent carvings but trapping dampness inside the stone, speeding the decay.

In 1997, a metal shell was erected outside the chapel to protect it from the harsh Scottish weather and allow the now fragile stonework to dry out.  This is the state in which one will find the chapel today – certainly not as mesmerizing as in the text of the DaVinci Code, but the mystery surrounding this site is nonetheless marvelous.

The interior of the chapel has a number of features one should notice during the visit.  The Apprentice Pillar, with its exquisite carvings, was done by an apprentice of the stonemason in charge of the chapel construction.  It is rumored that when the stonemason found out the apprentice had finished this column without his consent, he killed him with a mallet, on the spot. Many of the arches contain “music boxes”, which some believe to be a secret code which has not been deciphered. There are also the Green Men who are found throughout the chapel; these men represent rebirth and fertility. Many carvings also appear to be images of maize; this is unusual as at the time of the chapel construction, corn was not a known crop in Europe.  Lastly, at the very top of the chapel ceiling is the Great Rose Window. At noon, on the day of the summer and winter solstice, a ray of light strikes directly onto this piece of glass, bathing the entire chapel in a rose-colored light.

The most interesting feature of all, is not in the chapel itself, but in the vaults that lie underneath.  These have been sealed, and the current Earl of Roslin, who owns the chapel and land, will not allow anyone to view their contents.  The vaults may contain the bodies of the Knights of Templar, the Holy Grail, treasures or other priceless artifacts.   Scans taken from above have been inconclusive, but reveal images of knights in armor below.  What is truly there remains a secret that Rosslyn Chapel will continue to keep for her foreseeable future.

To reach Roslin, take Lothian bus 15A (not 15) from Saint Andrew’s Square; the bus drops passengers off a short 5-minute walk from the chapel.  Ask the driver, if unsure, where to disembark.  The trip is approximately 25 minutes in each direction.

Editor’s Note:  As many historical facts of Rosslyn Chapel have been disputed, the information displayed here is courtesy of the Rosslyn Chapel Trust .

Rosslyn Chapel Secrets The barrel-vaulted roof of the Chapel, from east to west comprises sections of carvings of Daises, Lilies, Flowers, Roses and Stars. - The Daisy, white petals, the backs tipped with pink, its centre has a large yellow (gold) head … white surrounding gold. The white Templar Mantle has a large red Latin cross on the back. - The Lilies … St. Matthew, ‘and why take ye thought for raiment. Consider the lilies of the field, how they grow; they toil not, neither do they spin: yet I say unto you, that even Solomon in all his glory was not arrayed like one of these’. Sir William St Clair introduces King Solomon … and Solomon built a Temple. - The Flower panel is left for the moment … we move to the Rose panel. - In the Song of Solomon ... I (Solomon) am the rose of Sharon and the lily of the valleys. It is once again Solomon and a link with the Lilies and a valley … (the valley of the River Sals). - With the Stars there are Angels, the Sun, Moon, a Dove, Jesus himself and what looks like water. In Luke’s Gospel ... Now when all the people were baptised, it came to pass that Jesus also being baptised, and praying, the heavens was opened and the Holy Ghost descended in a bodily shape like a Dove upon Him and a voice came from Heaven. Jesus (St. Nazaire), and the river Sals in the valley at Rennes les Bains (a Spa). The Daises say, ‘Templar and Gold’ ... The Lilies and Roses point to Solomon and the ‘Temple at Jerusalem’. The Star section tells us of ‘Jesus and bathing’. Putting the Daisy, Lilies, Roses and Star panels together the (Key) message may be read as …The Knight’s Gold from the Temple of Solomon is in the Church of St. Nazaire Et Celse at Rennes les Bains. The Flower Section is between the ‘Roses’ and the ‘Lilies’, both referring to Solomon. The arrow-headed pendant boss suspends from the arch separating the Roses and Flower section. The Flower section points us to the vaults beneath the Chapel. In Psalm 103 verse 15. … As for man, his days are as grass: as a flower of the field, so he flourisheth. For the wind passeth over it, and it is gone; and the place thereof shall know it no more. … In St Matthew … wherefore, if God so clothe the grass (flowers) of the field, which to day is, and tomorrow is cast into the oven … the fireplace that is in the Sacristy. (The Apprentices Pillar also holds a clue). A John Slezer, writing in 1693, knew of bodies of the barons of Rosslyn found well preserved after four score years in the vaults. Sir Walter Scott’s epic poem, ‘The Lay of the Last Minstrel’ – “Seemed all on fire that chapel proud, where Roslyn’s chiefs uncoffin’d lie. Each Baron, for a noble shroud, Sheathed in his iron panoply. Seemed all on fire within, around, deep sacristy and altars pale. Shone every pillar foliage bound (Apprentices Pillar), and glimmered all the dead men’s mail. Blazed battlement and pinnet high, blazed every rose-carved buttress fair. So still they blaze when fate is nigh, the lordly line of high St. Clair” … And when fate was nigh, the fire was lit in the fireplace in the Sacristy. Sir Walter Scott knew the way down into the vaults below the Chapel was via the fireplace in the Sacristy, he was privy to the innermost secrets of the Templar. ‘Nothing is wanting but the key and if thou canst comprehend these things thou knowest enough’ It would be an inexpensive and non-damaging exercise to drill a few small holes through back or right hand reveal of fire place and insert a probe camera; it should reveal steps. Geoffrey