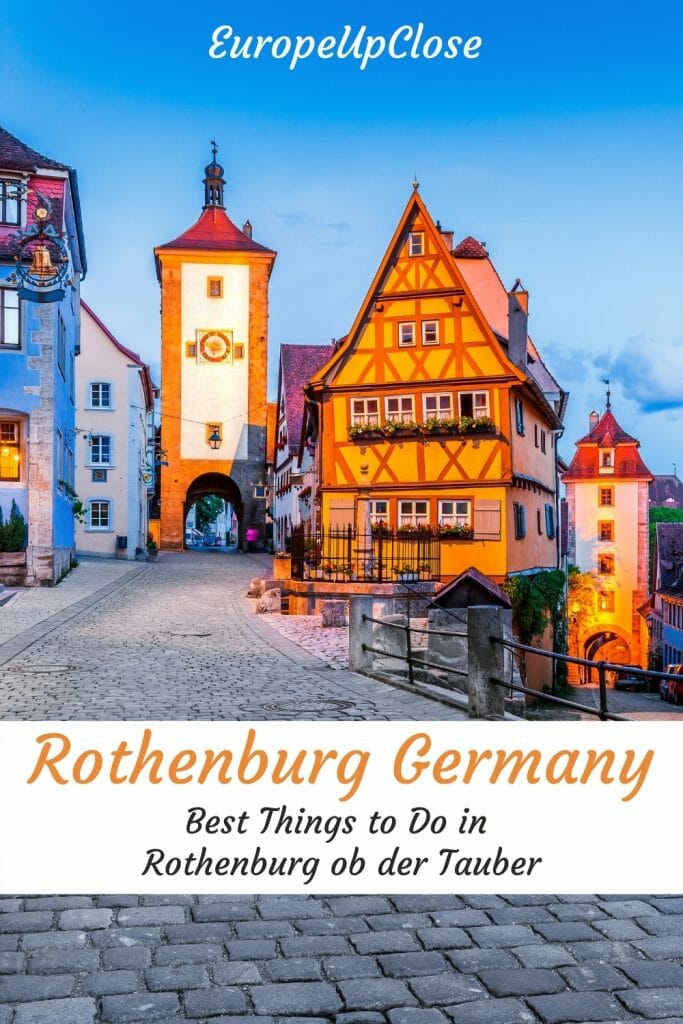 At the crossroads of the Romantic Road and Castle Road sits a small city with unparalleled history and distinctive half-timbered houses. Rothenburg ob der Tauber draws many tourists but is still far enough off the main routes through Germany.

If you love the idea of exploring a fairy tale town in the heart of Germany, here are the top things to do in Rothenburg ob der Tauber that you need to add to your itinerary.

Best Things to Do in Rothenburg ob der Tauber

1. Take a Walking Tour By Day or Night

Rothenburg is an ideal town to explore by foot, as it’s primarily flat and well-cobbled. There are great options for walking tours no matter when you want to see the city.

By day, the Rothenburg Tourism Office recommends a 90-minute walking tour of the Old Town. Your guide will show you some of the most important buildings in the city, and guide you through the labyrinth of narrow roads to cover many parts of the city. In the process, you’ll learn about the fascinating history of Rothenburg, and have plenty of opportunities for photos.

€8 per person; tours daily from March to October. Contact Rothenburg Tourism outside these dates for more details.

By night, everyone recommends the Nightwatchman tour. Lead by a traditionally-dressed ‘nightwatchman’ with a great sense of humor, the tour meets in front of the city hall several times each evening. In a large group, you’ll wander through the center of town, learning the ‘darker’ parts of history, tidbits about Rothenburg’s fascinating architecture, and even why nightwatchmen were needed at all.

As one of Germany’s most well-preserved cities, it’s a perfect spot for a museum that houses some of the oldest medieval relics still in existence. The Mittelalterliches Kriminalmuseum (Medieval Criminal Museum) is one-of-a-kind, housing 30,000+ artifacts of “law and order” from 1,000 years of medieval German history.

Exploring the museum’s permanent exhibit, you can see everything from shackles, stocks, and punishment masks to a dunking stool used to punish bakers who cheated their customers. This is also home to the famous Iron Maiden of Nuremburg, a “torture” device historians have studied and preserved, which is now the crown jewel of the collection.

The Kriminalmuseum also has a temporary exhibit building, which changes exhibits from time to time. For example, one past exhibit focused on Luther and witchcraft; the exhibits offer a fascinating expansion of what the museum normally offers.

Adults are €7, families are €17. You can also book a guided tour of the museum.

3. Enjoy a Taste of the Tauber

Restaurants in Rothenburg are offering a special menu that features local dishes and ingredients beyond the standard dishes you might expect; one of the most popular places to try this menu is at Eisenhut Hotel & Restaurant. On their special menu, Eisenhut Restaurant chefs offer both a la carte and prix fixe menus so you can choose as much or as little food as you’d like to try.

Rothenburg is also affectionately known as “Christmastown,” Germany – and for good reason. Their Christmas market is one of the best in Europe, but they celebrate Christmas year-round.

The flagship Käthe Wohlfahrt store is located in Rothenburg, and houses tens of thousands of unique Christmas and holiday decorations. The store is beautiful, modeled on a Christkindlmarkt (Christmas market), and can take a while to explore. Read our full article on Käthe Wohlfahrt Rothenburg here>>

Fans of Christmas should also be sure to visit the Deutsches Weihnachtsmuseum (German Christmas Museum). Meticulously designed to offer guests an accurate education about the history of Christmas, this museum makes up for its lack of flashiness with an astounding number of items. If you’ve ever wondered why Santa Claus wears red, the decorations we’ve used through the centuries (including what ornaments Nazis hung on their trees), and who Krampus is – this is the perfect museum for you.

Nothing beats a good view. Climbing the tallest building in every town gives you the chance to see the city spread out below you – it gives a good context for the city and the countryside.

If this is something you enjoy, be sure to take an hour to climb the Rathausturm (Town Hall tower). 220 steps take you to the top of the tiny spire, and the panoramic views are worth it. Admittedly, it’s a very narrow viewing platform, so this probably isn’t good for people afraid of heights. If you’re okay with a little thrill, this is definitely worth the time and money.

€2 per person, paid at the top once you’ve climbed about 220 stairs.

Rothenburg has one of the most complete and well-preserved city fortifications in Germany. Even better, they’re completely free and open to the public (unlike say, Dubrovnik!). Take a walk one afternoon to climb the rickety steps onto the narrow walkway and enjoy the views. You can peer through arrow slots to the surrounding countryside, or get a great view of Rothenburg from above roof level.

Don’t forget to pay attention to the names and locations inscribed on certain stones built into the wall. Following World War II, Rothenburg “crowdsourced” restoration funds, and allowed people to buy sections of the wall with their donations. These names come from around the world and throughout the past seven decades – you might even see a name you recognize!

If there’s one restaurant everyone recommends in Rothenburg, it was Zur Höll (“to hell”). Tucked off the main streets near town hall, Höll is a hopping spot despite the potentially off-putting name.

This restaurant is so popular that it often requires a reservation, so be sure to arrange one in advance if you want to have a tradition dining experience here. The tiny restaurant is low and crowded, but will transport you back in time.

Zur Höll is located at Burggasse 8, less than five minutes walk from the main square of Old Town Rothenburg.

After hell (or maybe before), be sure to explore St. Jakob’s Kirche (St. James’ Church). This “small” city church is beautifully constructed and has admirable stained glass. It’s also home to three other must-see items.

First, the church is currently housing several African sculptures, and selling smaller souvenirs made by African artists and craftsmen. Second, the Holy Blood Altarpiece is housed in the upper back section of the church behind the organ. As the name suggests, this beautifully hand-carved “high alter” contains a relic: several drops of Jesus’ blood.

Finally, be sure to stop by and say hello to St. James outside the main entrance of the church. He wears the garb of a traveler and marks Rothenburg as one of the stops on the Camino de Santiago through central Germany.

This includes the best things to do in Rothenburg ob der Tauber, but there is so much more if you have more time to explore.

Valerie Stimac runs the travel site Valerie & Valise as well as other sites, including one focused on helping you plan London travel since you’ll already be exploring Europe.

Amazing Things to do in Rothenburg ob der Tauber – Pin for later: