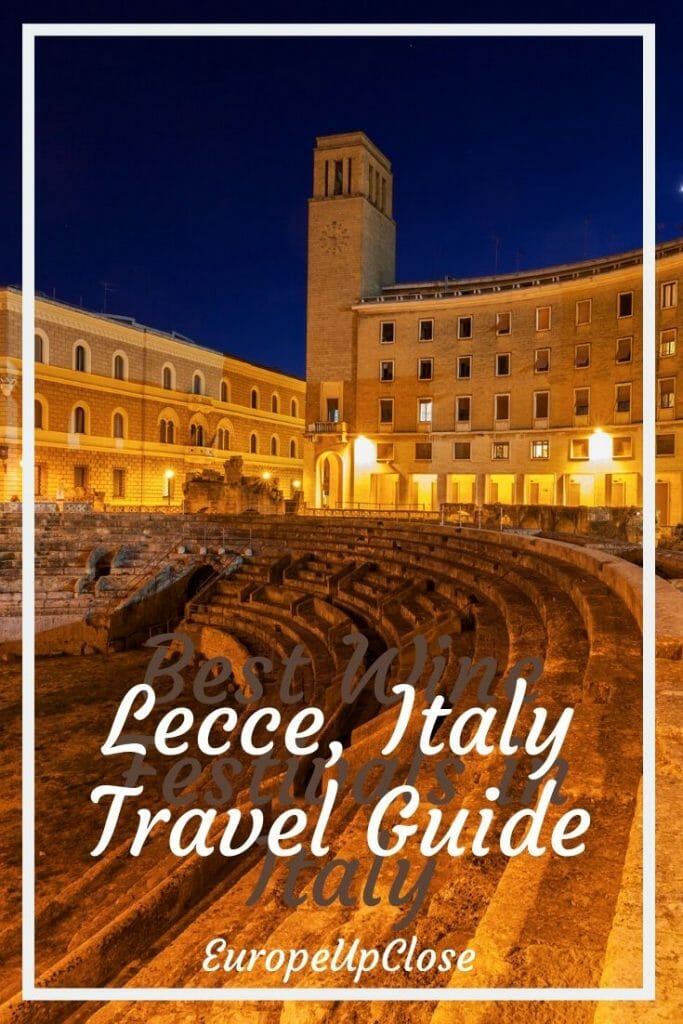 Things to Do in Lecce Italy

Lecce Italy is a city of 90,000 located about as far south on the Italian boot as you can go. And though it is not well known—or perhaps because of this—it took my breath away when I first stumbled upon it three years ago. Intricate Baroque sculptures pop out of the walls at every turn. No matter what your perfect vacation looks like, Lecce Puglia covers it all. Lecce Italy is the perfect destination for beach, culture, and culinary travelers.

Lecce is distinguished by those tiny cobblestone streets that Italy is known for, those that twist and wind like a labyrinth. The tall doorways and balconies feature stone carvings that are particularly elaborate because of a rare limestone called Leccese Stone, or Pietra Leccese. Unique to the area, it has the quality of being soft and easily carved when first excavated and then, after it has dried, becoming very hard. Lecce is known as the “Florence of the South” because of its architecture and sculptures.

The façade of the Santa Croce church is the most impressive, and like most of the facades in Lecce, was added to a pre-existing church during the 17th Century, thanks to an outpouring of money and interest from the Hapsburg Dynasty.

It features creatures as bizarre as those from the book “Where The Wild Things Are”. The experience of looking up at the façade can be overwhelming and I still, three years later, find new details.

A Roman amphitheater from 400 A.D. comprises half of the main Piazza Sant’Oronzo where an incredible Duomo with a 210-foot tower sits in the middle, and a young university crowd spills out into the streets from numerous jazz clubs every night.

Lecce has two castles; the most impressive being Castel Carlo IV, which was built in the 16th Century. It is one of twenty castles on the Salento peninsula. Lecce’s open-air market sets up around the castle, and you can find everything from inexpensive sunglasses and clothing to African wood-carvings and espresso makers.

Lecce is not a beach town, but you have a wide selection of Puglia’s best beaches at your finger tips. Here are some of our favorites:

Lecce’s cuisine is one of a kind, and its wines have recently gained respect from the world market. A two-to-three course dinner with wine can cost as little as fifteen euro per person.

Puglia, one of the poorest regions in the European Union, has had its cuisine shaped by poverty (cucina povera means cooking for the poor), and the result has contributed to the creation of dishes that cannot be found anywhere else in the world, not even in Italy. Most are vegetable focused, providing a hay-day for vegetarians, though meatballs, fresh seafood, and horse-meat are also common.

Ciceri e tria is a traditional dish of chickpeas and homemade pasta, half of which is deep-fried, and cannot be missed. It is a unique take on comfort food. Some of the best restaurants providing traditional Pugliese cuisine are these:

The Le Quattro Spezierie restaurant on top of the Risorgimento Resort Hotel offers very fine Italian food with memorable views of Lecce’s skyline, including the exquisite 210 foot Duomo tower. The dinner menu for the Le Quattro Spezierie features many local dishes done with, what appeared to be, a creative flare.

Along with the service and the atmosphere, the wine list was impressive, featuring international selections as well as many local wines. The local wines were offered at very reasonable prices—prices that would likely shock diners familiar with the usual fine-dining wine lists in San Francisco or New York City. I even saw one wine listed for the same price that I saw it selling for in a wine store earlier that day.

Famous for its authenticity, cozy and rustic atmosphere, and homey service, the Cucina Casareccia restaurant, located in Lecce, Italy, is the beating heart of Pugliese cuisine. A taste of Puglia’s cuisine can be likened to a taste of the region’s hearty past.

Casareccia has been noted by gourmets around the world, notably Frank Bruni of the New York Times, and the restaurant proudly hangs a photo of Francis Ford Coppola dining at the restaurant. This is no ordinary restaurant. Only recently has it added a sign to its front door. Before, its fame traveled only by word of mouth. And to this day, you must call the restaurant in advance to secure a table. When you arrive, you must ring the front doorbell to gain admittance into the friendly and warm dining room. There are no written menus, and the waiters and waitresses, who are often your cooks as well, recite the day’s dishes at the your table.

Before I dined at Casareccia, I was worried that it was both too expensive and too austere. My fears, however, were unwarranted. The restaurant is just like home. The kitchen that the cooks work out of is located in the kitchen of the old house in which the restaurant is now located, and the dining rooms were clearly once a living room and a foyer. The staff  are much more like family or hosts. They are professional while remaining down to earth, and they are polite with non-Italian speakers, making sure they know what they are ordering. As for price, the price of a dinner for two with house wine is usually around $70.

After dinner, patrons who speak fluent Italian chat with the chefs about recipes, while those with no Italian gesture with delight and give compliments in the form of empty plates. When I left the restaurant, I felt as though I had just partaken in local tradition.

If you want to taste truly traditional Pugliese cuisine, I believe that there are few ways better than dining at Casareccia.

Where To Stay in Lecce

Night of Lights and Symphonies: The Sant ’Oronzo Festival in Lecce, Italy

When the large food venders rolled in, I knew this was going to be a big one. Lecce features events of all shapes and sizes on a weekly basis each summer, but the biggest celebration of all is the Sant’Oronzo Festival. The streets are lined with elaborate, blazing light displays as well as food and merchandise stands of all types.

The annual event takes place on the 26th of August, and marks the end of a long month of rest and relaxation for Italians. Concerts also take place in every arena in the city, many of which are outdoors. One such concert takes place at the ancient amphitheater in the center of the main piazza, and the music can be heard drifting up the streets in all directions. The event features the very best light display that I’ve ever seen.

The festival begins with a solemn parade in honor of the patron saint of Lecce, Saint Orontius of Lecce (Sant’Oronzo in Italian). Sant’Oronzo is famously attributed with saving the city from a plague in 1656, and is now honored with a statue of him which stands atop a tall pillar in Piazza Sant’Oronzo.

Beginning at 7pm, the parade features a brass band, religious singing, monks and nuns dressed in traditional attire, and large gold and silver statues of saints that are carried on biers by priests and military men. This rather short, but impressive parade winds its way through the whole length of the town and back.

Several of the largest streets in Lecce are taken over by street merchants who sell trinkets, toys, cookware, and other odds and ends. The food venders are nearly as eclectic, selling everything from hot-dog and French-fry pizzas to fresh olives and pate. I chose to stay away from these areas because they were so busy. Once you get lost in one, it’s very hard to escape!

The music struck up all around the city after nightfall. My favorite performance, modern dance with accompanying music, took place in the Teatro Romano—an ancient Roman theater in the city center. The Amphiteatro Romano in Piazza Sant’Oronzo featured a complete symphony that could be heard everywhere in the massive square. I’m not sure why anyone would pay for a seat!

The most impressive element of this celebration is the massive display of lights that fill the city. The streets of light all lead to Piazza Sant’Oronzo where a towering dome of light stands nearly 25 or 30 feet high.

When there are no bands playing beneath the dome, you can walk beneath it and stare into the thousands of twinkling lights for a memorable visual experience. It took the city an entire week to erect the lights, and even three weeks after the event, the lights were still up, though no longer lit at night. It seemed that the people of Lecce were simply not ready to let go of this fabulous festival.

As you can see, Lecce is a great base to explore all the top places to see in Puglia. Definitely add it to your next Italy Itinerary!