While the rest of her country huddled around television sets to watch their national football team become the most successful of all time, Montserrat was sitting in a dark room in Madrid, with a 53-year old ex-Flamenco dancer, smoking hash. “Damn football,” she said. “It’s just another way to make us forget how screwed up our country is.” 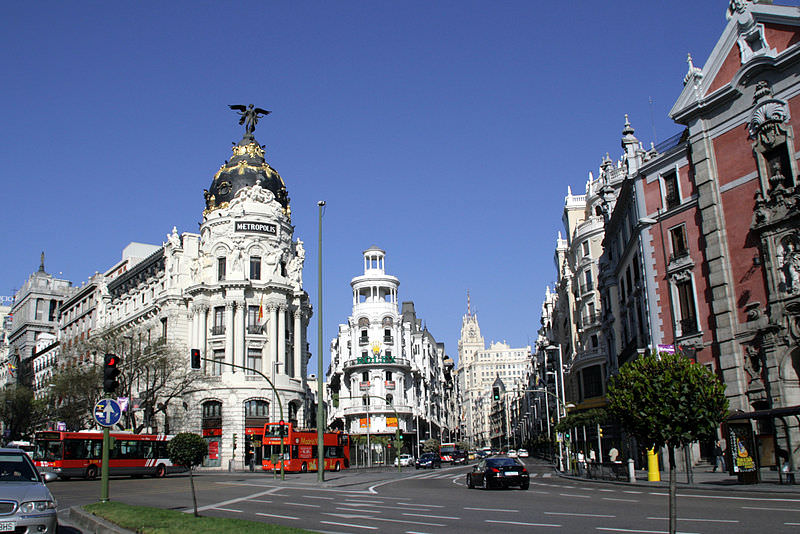 I met Montse last year in Colombia, where we were both backpacking for a couple of months. We spent our only day together hiking through the Cocora Valley, chatting about romance and careers and her hometown of Madrid, a city that I have always loved.

Madrid has all the aspects of a traditional European capital – wide boulevards, grand plazas, baroque architecture and Gothic churches. But apart from Picasso’s most famous painting, “Guernica”, Madrid lacks the must-see sights of a Paris or London, making it, in my opinion, one of the most underrated cities in Europe. It is the only capital that isn’t built on a river, it’s boiling hot in the summer, and it’s often overshadowed by its more artistic neighbour, Barcelona. 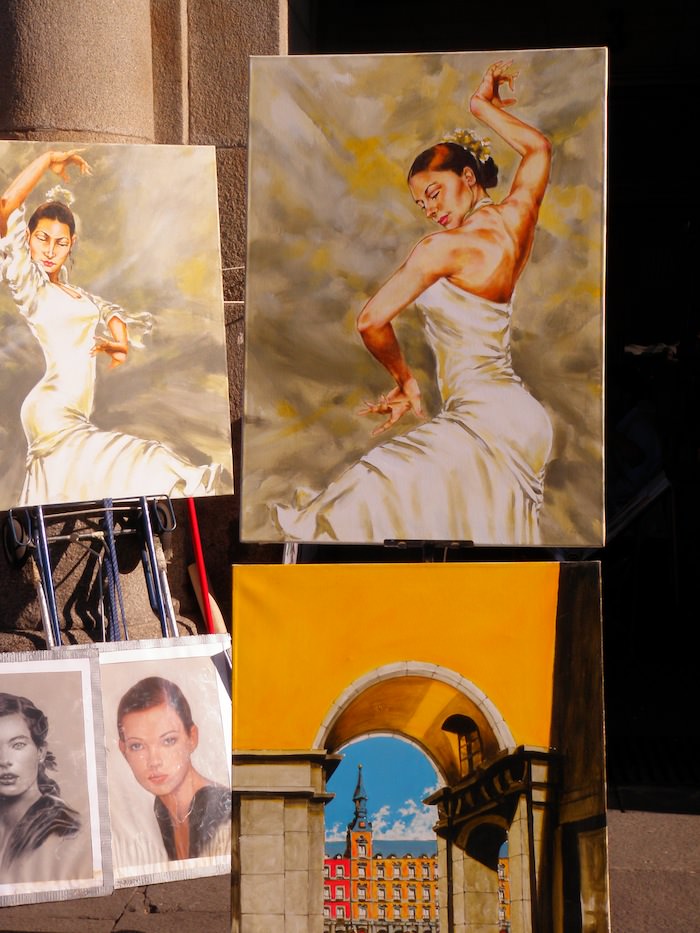 But spend some time in Madrid and you’ll quickly realize that there aren’t many places where life is more vibrant than in the capital of Spain. Days full of coffee and tapas in local cafés, fabulous galleries and shops, cheap and delicious gazpacho, colourful taverns, siestas and sailboat rides in Retiro Park. You’ll find excellent shopping along Gran Via, terrific souvenirs around Plaza Major, the birthplace of Cervantes near Plaza Santa Ana and two world-class museums: the Prado and Reina Sofia.

The more bohemian neighbourhoods of Malasana, Chuecha and La Latina are full of funky boutiques, retro clothing stores, punk bars, and the city’s best tapas. After siesta, when the sun goes down, the flamenco dancers, street performers, bullfighters and hot-blooded Madrilenos come out, and make you feel like you’re not really living if you’re anywhere but here. 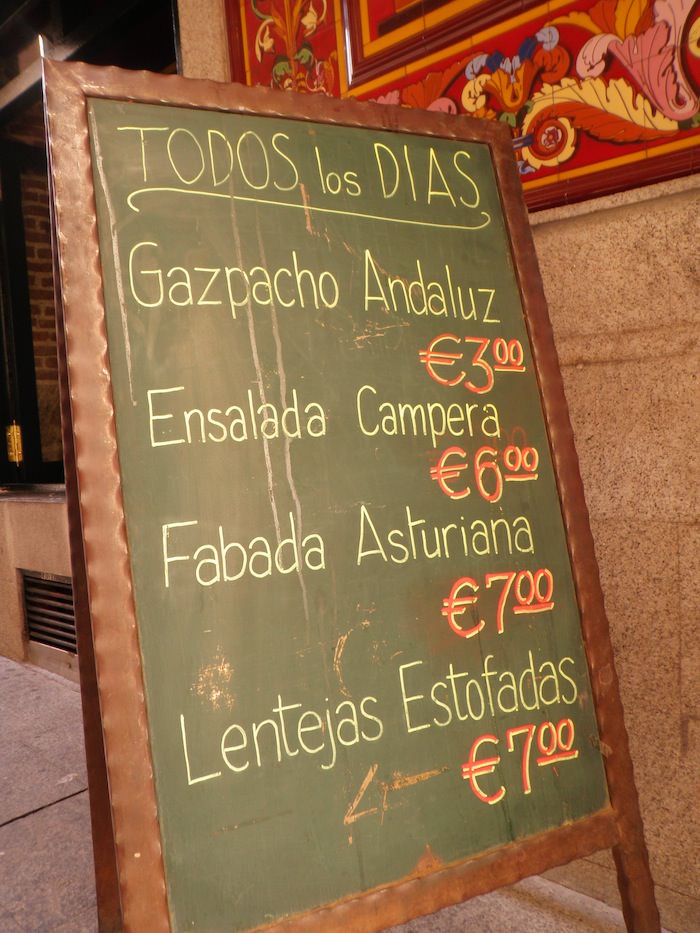 When I told Montse I was coming to visit her this year, she offered to show me an area I might not have explored before. “Meet me at my club,” she wrote in an email. “It’s in Lavapies, the most diverse and revolutionary neighbourhood of the city.” Mario Vargas Llosa wrote that in the Lavapies district, “The human geography of the planet seemed to be represented in its few blocks.” It is full of Indian restaurants, shisha bars, Jamaican 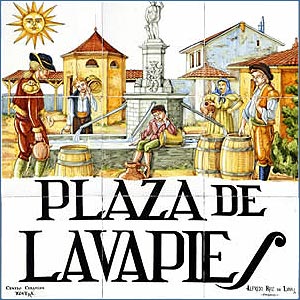 snack shops, and walking down the street you’re as likely to hear Arabic as Spanish. I turned up in Lavapies at 9:30pm on a warm evening, when most Spaniards are just starting to think about having dinner. The streets were full of people; kids riding bikes, women laughing and men standing around with take-away containers and cans of Coke or beer. It was a couple of days after Spain won their second consecutive Euro Cup – making them the only country to ever win the Euro Cup twice, plus a World Cup title in the middle. – and the entire city was still buzzing.

The street address Montse had given me belonged to a house with a rusty metal shutter pulled halfway down the door. Montse pulled up a few minutes later on her motorbike. She parked on the sidewalk, we kissed twice on the cheeks, and she brought me into Madrid’s only private cannabis club, of which she is a founding member. “There are 2000 members now, but only a few of them actually pay the fee,” Montse laughed as she hurried through the hallways, putting down her helmet and grabbing us a couple of beers. “The others just turn up when they feel like it, which I guess is to be expected from this kind of club!” 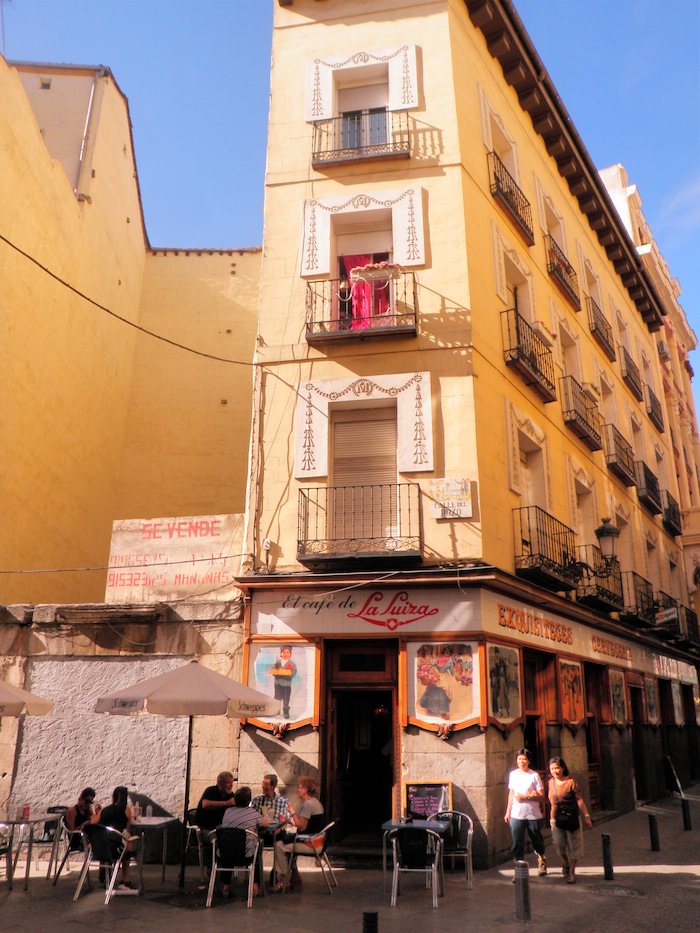 The official purpose of the club is to allow members and friends to smoke cannabis in a safe, legal environment. The unofficial result is that a bunch of likeminded people get together to chat about the state of their country.

When Montse and I first met, she had casually mentioned that she’d taken part in a few protest marches. Back then, I didn’t know much, or care, about the financial situation in Europe. Now, one year later, the words “austerity cuts” and “Eurozone” make international headlines daily. Spain is at the centre of the crisis with a national debt big enough to drive the country into bankruptcy, and prompt talks of abolishing the euro entirely.

There was no one better than Montse, who used to work for the United Nations and is now a teacher, to explain it all to me. She doesn’t have a specific reason for why Spain’s economy is on the verge of collapse, or why its unemployment rate is the highest in Europe. She cites a few possible reasons: they built too many houses; they followed too readily in the footsteps of America; they gave out too many mortgages; the population was unable to resist all the money they were given by the banks. 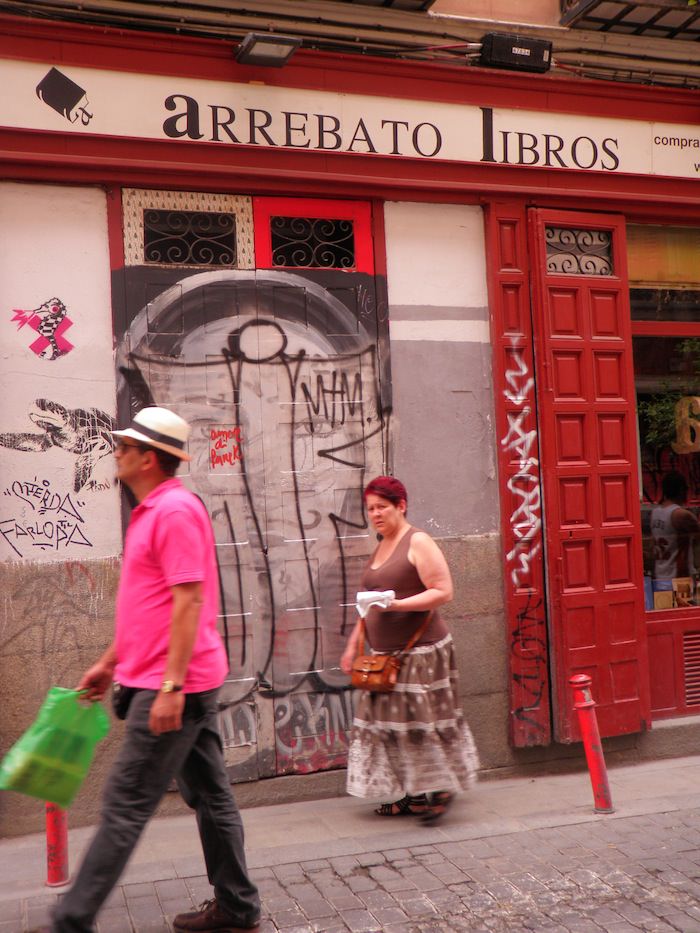 But what happened in the past, she says, isn’t the point now. “At this moment, what is important is how we react to it,” she said, after we’d finished our beers and went for a stroll through the neighbourhood. “Things are bad here, and it makes me angry that everyone comes out to celebrate the football, but they can’t come out to protest when their country is falling apart.”

Although they might not be loud enough for Montse, the Spanish people have definitely started to speak up. The first protests in Madrid, and nearly 60 other Spanish cities, began on May 15, 2011. They were organized by a group that called themselves the “Indignados”: the Indignants.  They were looking for changes not only to the current political party, but to the entire political and economic foundation of Spain, which they believe has been corrupt for years. Previous governments drove the country into debt, and the current government has introduced austerity measures in an attempt to balance the budget. However, this has meant cuts to social programs and retirement packages, university fees have gone up, and jobs have gone down in a country where the national unemployment rate is already 21 per cent, and 45 per cent among youth. It’s harder than ever for young people to get jobs straight out of university, and a brain drain is inevitable. 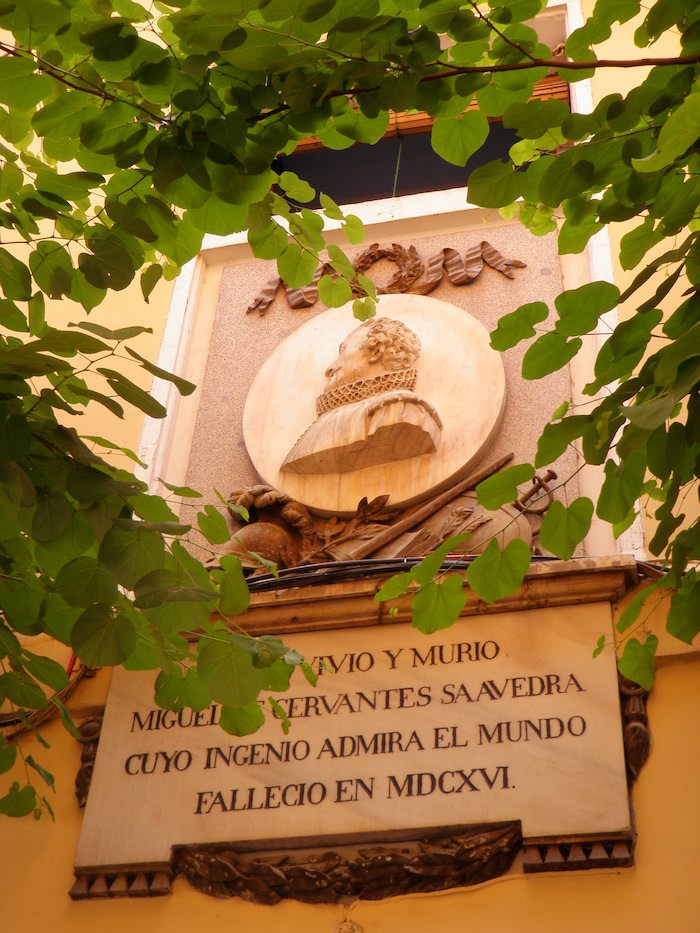 The birthplace of Miguel Cervantes

On May 15, camps were set up in town squares across the country. For the next month, Madrid’s Plaza del Sol- the point by which all distances in Spain are measured – was occupied by tents, libraries, shops, information booths, and up to 30,000 people. In the months that followed, there were police clashes, arrests, injuries, and finally, a new government was elected. But things only got worse as more austerity measures were introduced. A new symbol has emerged on windows and walls across the country: a poster of scissors with a line through the middle, symbolizing ‘No More Cuts’.

The Indignants were inspired by similar movements in North Africa, Greece, and the Arab World, and they in turn inspired the worldwide Occupy Movement, which began last October. Since that first month, an estimated 8 million Spaniards have taken part in protests across the country. It is an incredible time to visit the country, because you feel that you are in the middle of something important about to happen.

We came to Calle Embajadores, where Montse lead me through the two big doors of  Tabacalera. Inside was an old tobacco factory which, at some point after it stopped being functional, was taken over by the people of Lavapies and turned into a cultural centre. The cavernous space is now a concert hall, art gallery, yoga studio and revolutionary headquarters. There are posters for different marches around town, fliers for public meetings, and pamphlets. I could have spent an hour reading all of the material, but Montse, always on the move, pulled me into the courtyard where the walls were covered in brilliant graffiti: big, bold caricatures and Spanish messages such as: “I was sleeping; I have awoken.” 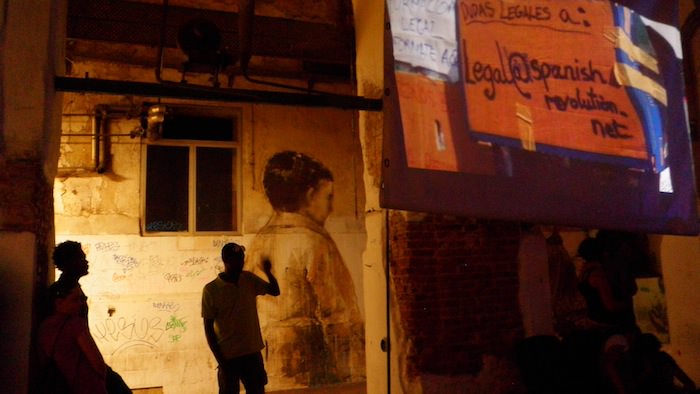 The Old Tobacco Factory in Lavapies

The last stop on our tour of Lavapies was at the studio – another large building taken over by the locals – where Montse practices yoga. One room had a giant clothing exchange where people could leave or take whatever they want. Another room had an art studio, and another had a table full of homemade food: hummous, pasta salads, rice dishes. Montse prepared a plate for both of us, and left whatever change she had in her pocket.

We headed back to her club through the dark streets. “This is why I live in Lavapies,” she said. “It feels like a community, we’re all here for each other, to help each other out. We don’t feel alone here. We live together, and we’ve made the choice to stay in Spain because we love it. And we believe it can be great again. ”She stopped walking for the first time in hours, right in the middle of the dark road. “And more than just great at football.”

Written by Andrea MacDonald for EuropeUpClose.com.

Lavapies is a filthy dump with the worst of the worst. I live in Spain and know several people who have been attacked and robbed there. There is a permanent police presence in the day but go there at night at your peril. A couple of the "locals" attempted to rob me once. I was lucky, others weren't. Don't ever go there! Go to google and search and look at the images. Scum.

[...] daily walk to work takes him through the zona alta of the culturally diverse Lavapiés district, which he describes as “full of stores selling Chinese goods wholesale.” After hours, he [...]