The first-time visitor is often drawn to Piran, the fishing village on the Adriatic coast, by beautiful photographs of a turquoise sea and Venetian-style architecture, but it is more than just a place to relax, it is a culinary heaven with some of the best wellness spas on earth. The town grew up on olive oil and the famous la fleur de sel sorts salt (at one time, salt was nearly as precious as gold), and other local delicacies to include white truffles, budget-friendly wines, and fresh seafood. To give you an idea of how important quality, local food is to Piran, a McDonald’s was opened in the town, but closed in less than a year. The city is the luminescent pearl on Slovenia’s 46.6-mile coast, and this guide is designed to help first-time visitors get the most out a trip to Piran, from the things to do and see, to the best hotels. 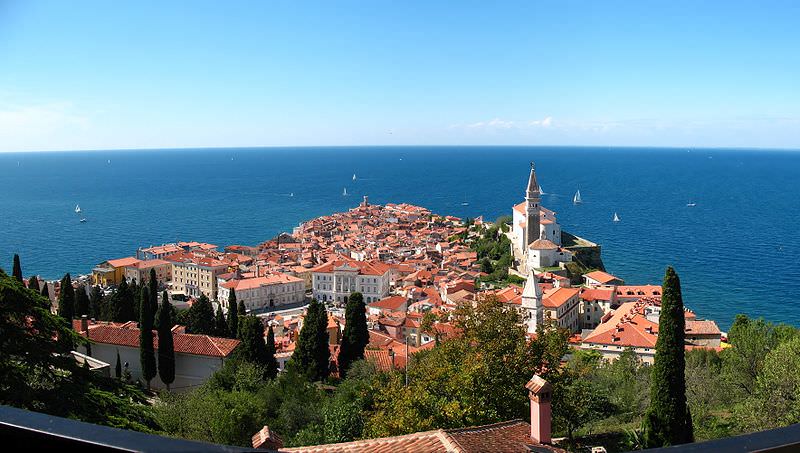 The country of Slovenia has a unique style and attitude: it runs as efficiently as does Germany but has the laid-back attitude of Italy. Piran was actually part of Italy until the end of WWII, and it remains bi-lingual today. Though Piran gets busy at the height of summer, it is still the type of town where you can have chance encounters with locals.

The larger town of nearby Portoroz lies east of the town, and it takes about 30 minutes to walk there. A scenic shore path runs between the two towns. Portoroz specializes in spa treatments thanks to the unique mud and salt found in the area.

What to Do and See in Piran 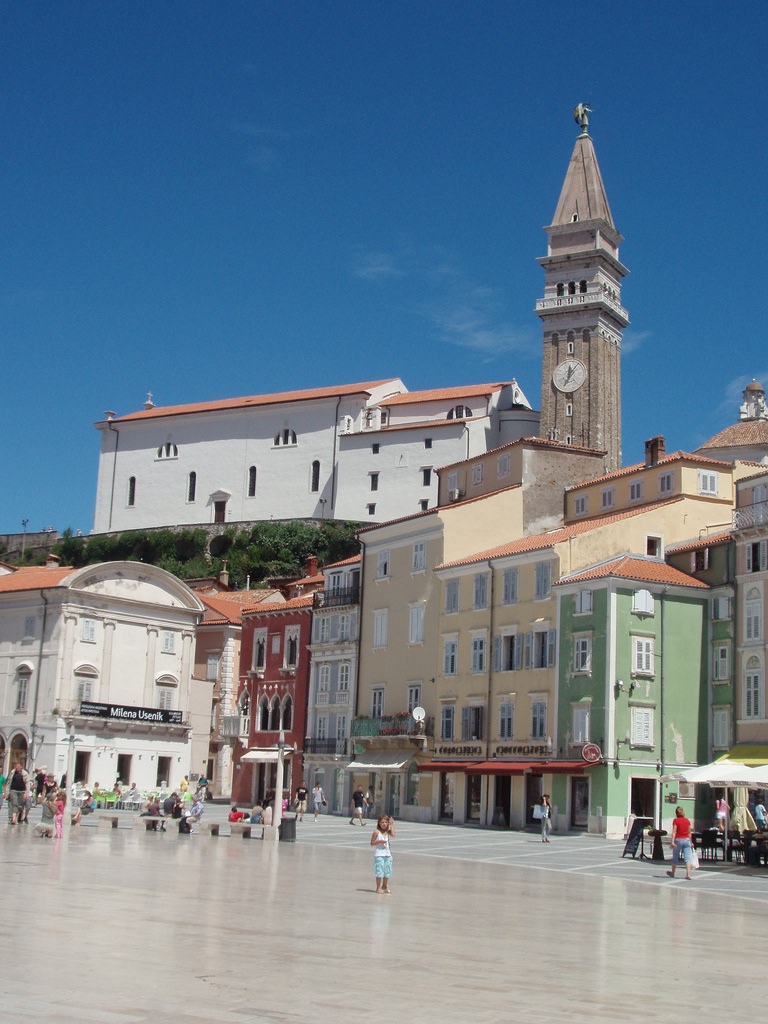 Recreational activities abound, from biking the seaside promenade, to sailing in the gentle waters of the Gulf of Piran. Swimming and tanning are, of course, exceptionally popular. One of the best, indeed, one of the only sights in Piran is the Church of St. George, and it’s worth hiking to the top of the bell tower (1€) to catch a spectacular view of the town. Portions of Piran’s old city walls run through the hill behind it, which can also be toured, and just behind them is the local cemetery, which is typically filled with bedazzling flower displays.

The main square is named after the violinist Giorgio Tartini. Make sure to check out the Venetian House, the red building on the square. Legend has it that a rich merchant built it for his beloved mistress, and there’s an inscription between the upper windows that reads Lassa pur dir, or “let them talk”. This was his way of proving to his love that she was more important than his reputation. 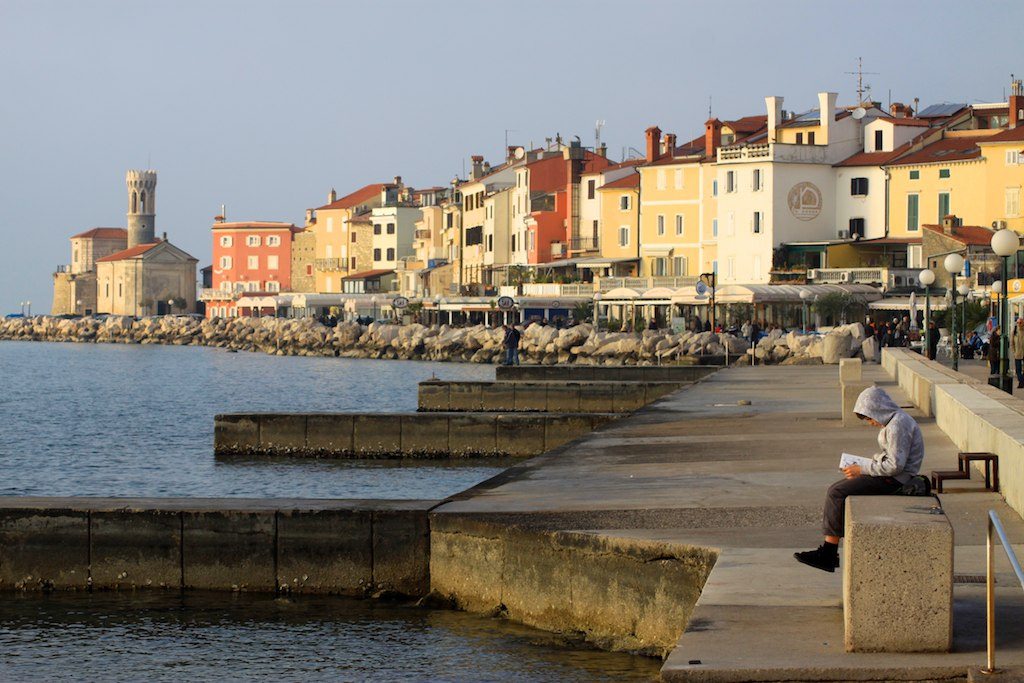 Many of the area’s best spas are located within the city’s hotels. Fortunately, you don’ thave to be a hotel guest to patronize them. The spas feature the area’s mud and salt, which are famous for their healing abilities.

The first-time visitor must try la fleur de sel sorts salt, either on savory dishes or in locally made dark chocolates. I recommend taking a guided tour of the National Park of Piran Salt Pans or the Fonda sea bass fish farm ( the farm is located inside the park). Fonda is known for producing the best farmed sea bass in the world, and I highly recommend a plate of sea bass carpaccio topped with local olive oil and fleur de sel sorts.

Where to Stay in Piran

Both Piran and Portoroz have a good selection of accommodations. I recommend staying in Piran if you want to have quaint cobblestone streets right outside your door, as Portoroz is a more modern city. Locals rent out private accommodations as well, and this is one good website for booking. Hostels are quite prevalent, but the prices are higher than typical. For more modern accommodations, I recommend staying in Portoroz. The luxurious, 5-star Hotel Kempinski Palace Portoroz , built during the time of the Austro-Hungarian Empire, pairs trendy, modern French décor with classic architecture.

Where To Eat in Piran 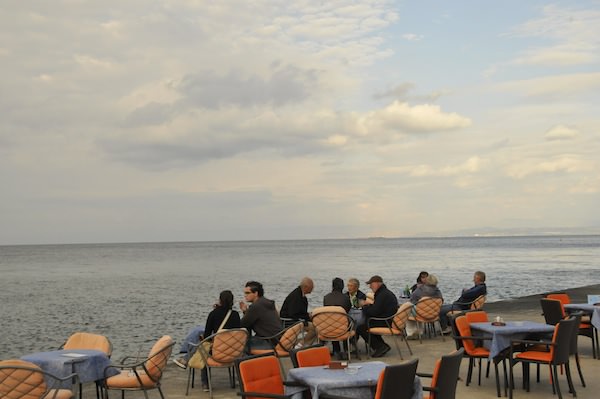 Here is a list of restaurant recommendations for Piran

How to Get To Piran, Slovenia

Ferries run from Venice to Piran, and from Piran to Rovinj, Croatia. Piran is also regularly served by bus from Trieste, Italy, and Slovenia’s capital, Ljubljana. Buses run further south through the Istrian peninsula, but the area is quite rural and I, therefore, recommend renting a car. If you are trying to get from Zagreb, Croatia’s capital, to Piran, I recommend taking a bus to Umag, then catching a local bus to Piran. Make sure to get to Umag early to make sure buses are still running. In general, bus service is almost nonexistent on Sundays.

[…] to say goodbye to the inspiring people of Piran, I jumped in a rental car and drove north along the Italian-Slovenian border to Slovenia’s […]

What are the other beautiful spots we could visit there aside from the square.

The town itself is all about atmosphere, from walking the promenade to sipping local wine in a cafe. It's small and romantic! I highly recommend taking a tour of the Fonda fish farm, which I believe includes some time in the National Park of Piran Salt (the wind was so strong when I visited that we had to call off my tour!). Portoroz is home to a few casinos, and the surrounding countryside is filled with farms selling and serving great olive oil, wine, produce, etc. From Piran, you can make day trips to Trieste, Italy or into Croatia, where the countryside is very beautiful. For me, besides the incredibly beautiful coast, this is a true hot spot for food lovers. Hope this helps!