London’s renowned Highgate Cemetery exudes its own distinct spirit as you stroll through its long, narrow winding gravel paths. Shaded by a forest canopy of ancient, leafy, towering oaks, alders, willows, and silver birch and chestnut trees, you can see all of England’s quintessential natural beauty within the 37-acre confines of this park-like necropolis. 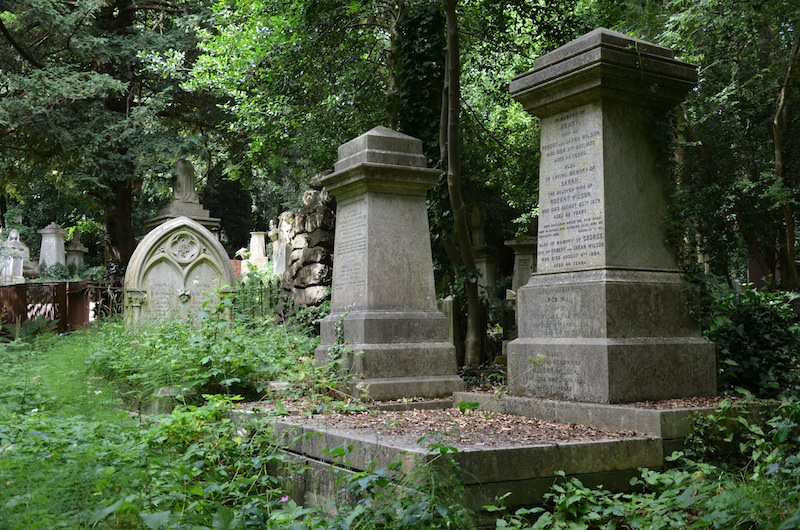 Spectacular marble and granite statues of religious figures, angels, and elaborate sculptures poignantly pierce through thick green tangles of ivy. Their faces are reclined with sublime looks of sorrow and joy. Curious red foxes sprawl on concrete tombs, soaking up the sun’s warmth as they eye the interlopers. 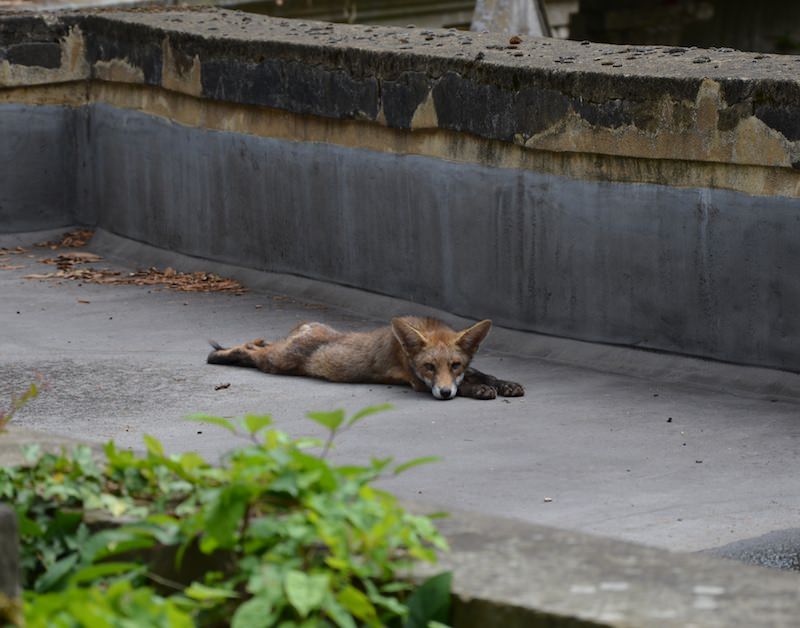 Curious red foxes sprawl on concrete tombs, soaking up the sun’s warmth as they eye the interlopers.

The sloping pathways rise in terraces up the cemetery hill, under the cool shade of the forest. Overhead, robins, finches and wrens sing happily. With these lush surrounds it’s no wonder that so many Victorians would take their Sunday promenade here, to “improve the moral tone”.

Highgate Cemetery boasts its own improbable architecture. Built because of the strong influence of Egyptology after the Napoleonic Wars and again in the 1920s when British tomb raiders plundered Egypt’s ancient treasures, the Egyptian Avenue is a striking feature of Highgate Cemetery.

Visitors come to a dead stop when they first see the gateway to Egyptian Avenue. Flanked by two pairs of columns with lotus bud capitals and a forbidding overhead archway, it leads to the “Street of the Dead”. In this somber alleyway, you pass a line of sixteen family vaults that resembles a street of terraced houses, covered by a green canopy of leafy branches. Each brick-lined vault has shelf room for twelve coffins. 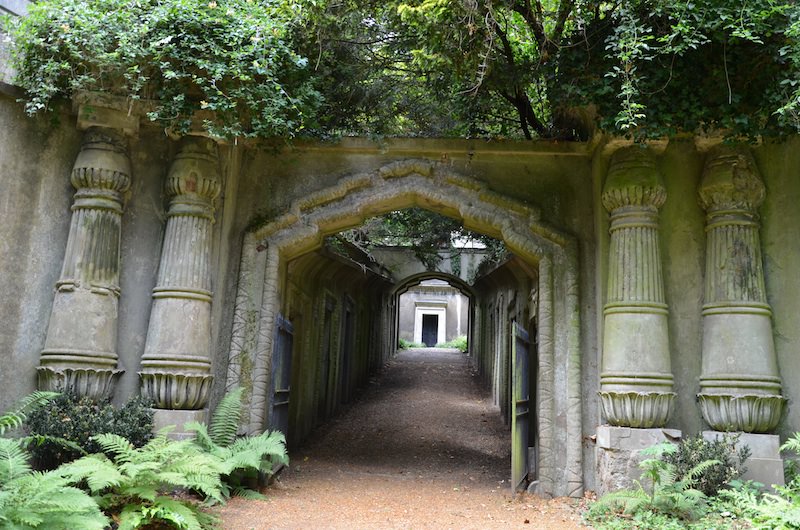 Visitors come to a dead stop when they first see the gateway to Egyptian Avenue. Flanked by two pairs of columns with lotus bud capitals and a forbidding overhead archway, it leads to the “Street of the Dead”.

Emerging from this solemn lane, you see a huge Cedar of Lebanon overlooking a circular island of twenty catacombs, each with Egyptian style pediments. The towering cedar is a remnant of the original Ashurst house garden, upon which the cemetery was built after the house’s removal. Classical style vaults were added in the 1870s when Egyptian vaults finally went out of style.

Continuing your tour you come to the Terrace Catacombs. With 80 yards of Gothic frontage this is the most atmospheric part of the entire cemetery. The long underground gallery of catacombs contains 840 recesses, each holding a single coffin. Overhead loculi allow light to filter into the tombs below.

As you wander past the brooding Neo-gothic headstones and mausoleums, shrouded with green blankets of ground creeper, you find yourself pondering the names on the headstones. Who was this person? Were they famous? What did he or she do in their lifetime? 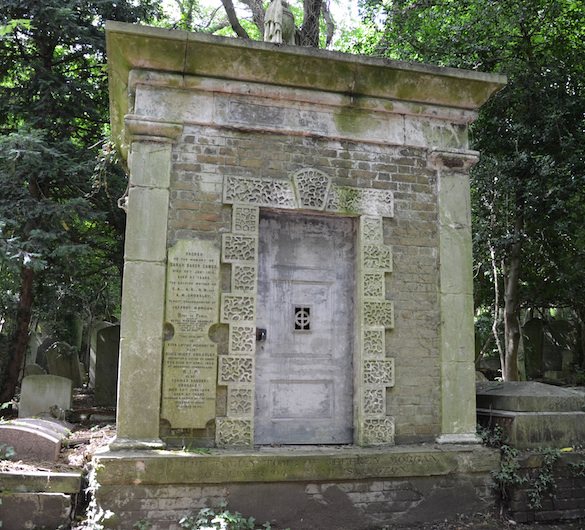 This sizable mausoleum is one of the cemetery’s most prominent monuments.

Indeed, Highgate Cemetery’s residents have some fascinating stories to tell. It’s the final resting place of a highly eclectic group of people from inventors and meteorologists to soldiers and firemen, and from members of Parliament to governors to surgeons. Bankers and antiquarians reside here as well. The arts are well represented at Highgate too, with authors, poets, sculptors, and playwrights.

People regarded as being on the fringe of society rest at Highgate, like spiritualists, explorers, and Muggletonians. Sportsmen relive their finest moments here including cricketers, balloonists and pugilists. One wonders at the conversations in Highgate Cemetery after closing hours!

Revolutionary German political philosopher and socialist Karl Marx rests here, perhaps the cemetery’s most famous tenant. A huge bust of Karl Marx, replete with long hair and craggy beard, sits atop a rectangular plinth with the words: “WORKERS OF ALL LANDS UNITE. THE PHILOSOPHERS HAVE ONLY INTERPRETED THE WORLD IN VARIOUS WAYS. THE POINT HOWEVER IS TO CHANGE IT.” 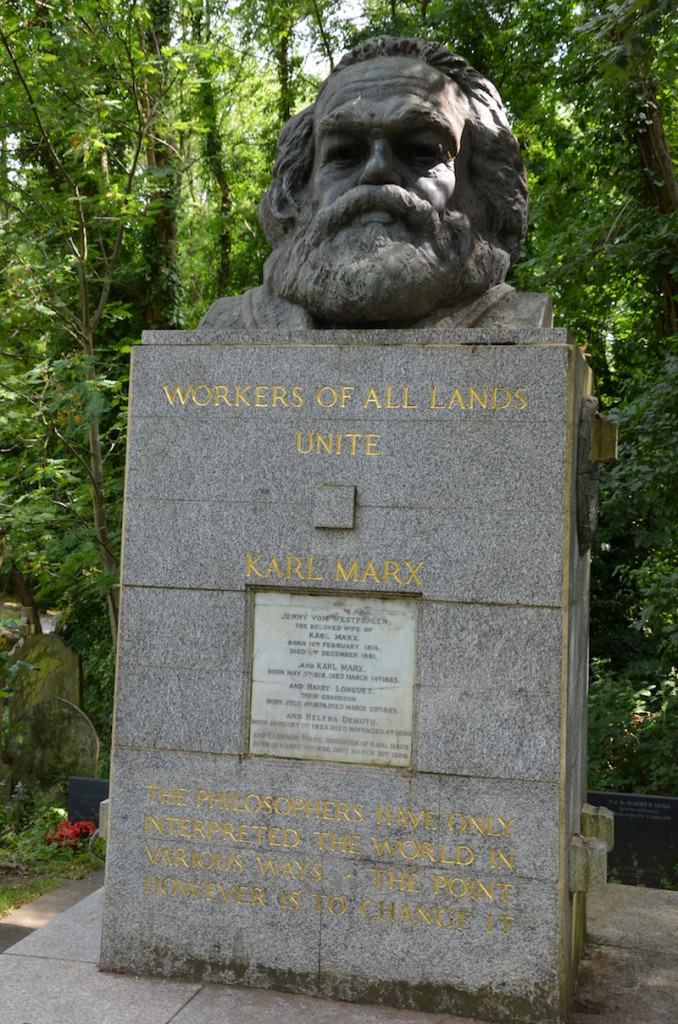 Demonstrations to mark the centenary of Marx’s birth in 1918 were banned and only people carrying wreaths were allowed to visit his gravesite in the Eastern Cemetery. The Russian Communist Party petitioned to have Marx’s remains returned to Russia, but the British Communist Party vetoed this, claiming that Marx “belonged to the world”.

Another colorful character interred at Highgate is Thomas Sayers (b.1826). The last of England’s great bare-knuckled prizefighters, Sayers is buried here after passing away in 1865 from tuberculosis (not to mention diabetes and his penchant for heavy drinking). Despite his diminutive height of 5ft 8 inches and weighing in at 154lbs dripping wet, Sayers only lost one of sixteen bouts.

His last fight, in 1860, was against American champion John (“Jack”) Camel Heenan. The match ended in chaos when the 12,000 spectators invaded the ring after 42 bloody rounds and two hours of slugging it out. The referee declared a draw. Sayer’s reputation was so formidable that he had great difficulty finding other prizefighters to take him on because he was considered just too dangerous. 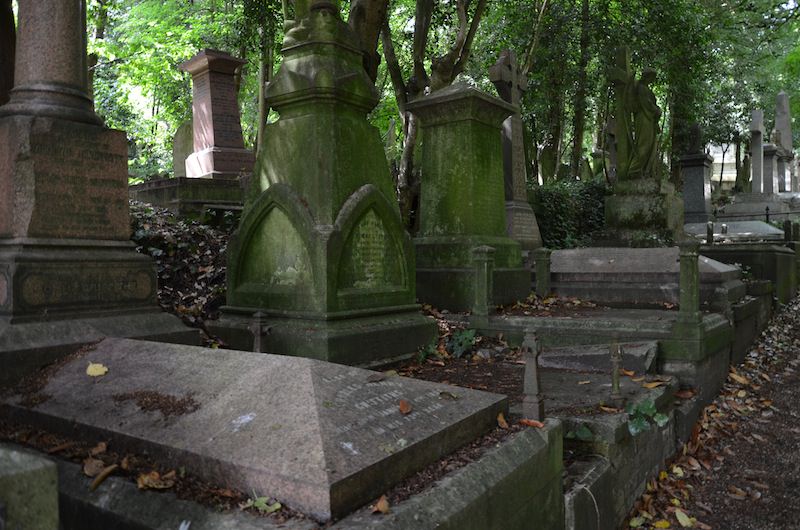 Moss and fern covered Grecian and Roman urns, Celtic crosses, and Neo-gothic headstones peek out from beneath the dense, luxuriant undergrowth and fallen leaves.

A statue of his large dog guards Sayers’ tomb. The mastiff led the funeral cortege with black crepe paper tied around his collar. Over 100,000 mourners turned out for his funeral, including some rough types from London’s east end, with predictable results. After the burial, the scene degenerated into scenes of “riotous behavior”.

George Wombwell’s tomb is guarded by a hulking lion. Listed on his tomb as a “Menagerist”, Wombwell (1777-1850) started his career importing snakeskin for bags and shoes. He soon started exhibiting exotic animals to the Victorian crowd, and became very wealthy. 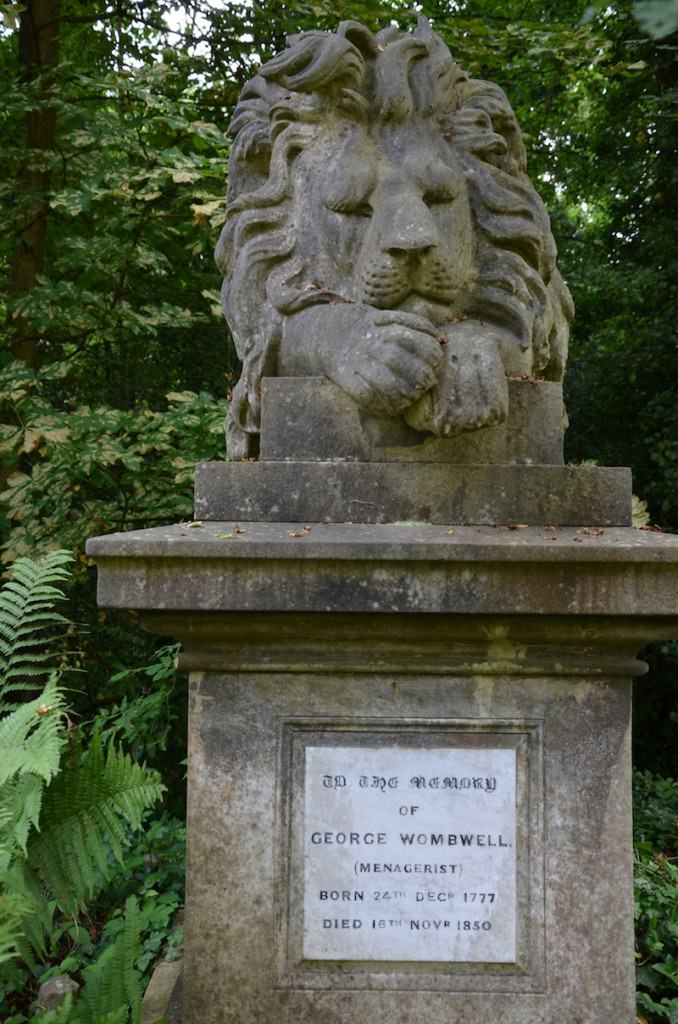 George Wombwell’s tomb is guarded by a hulking lion. Listed on his tomb as a “Menagerist”, Wombwell exhibited exotic animals to the Victorian crowd, and became very wealthy

Like many Victorian icons, Highgate Cemetery has its share of dark and scandalous stories. It suffered through its share of grave robbers, who sold the bodies to medical schools. Soon after the robberies started, the West Cemetery had a tall wall and heavy gates installed, and for a while soldiers were employed to protect the graveyard.

One of the Cemetery’s most bizarre cases was when Mrs. Anna Maria Druce of Baker Street, London, claimed that her husband was not only the proprietor of a Baker Street furniture store but was also the late 5th Duke of Portland, William Scott. Mrs. Druce said that her husband was leading a double life and had faked the death of his noble alter ego. Therefore, she claimed the duke’s estate.

In 1907, she finally convinced the authorities to exhume the duke’s body, to prove that the coffin would be empty. Unfortunately for her, the body of the deceased duke was uncovered intact. Then it was found that Anna Duce had been confined to an asylum for the past few years. 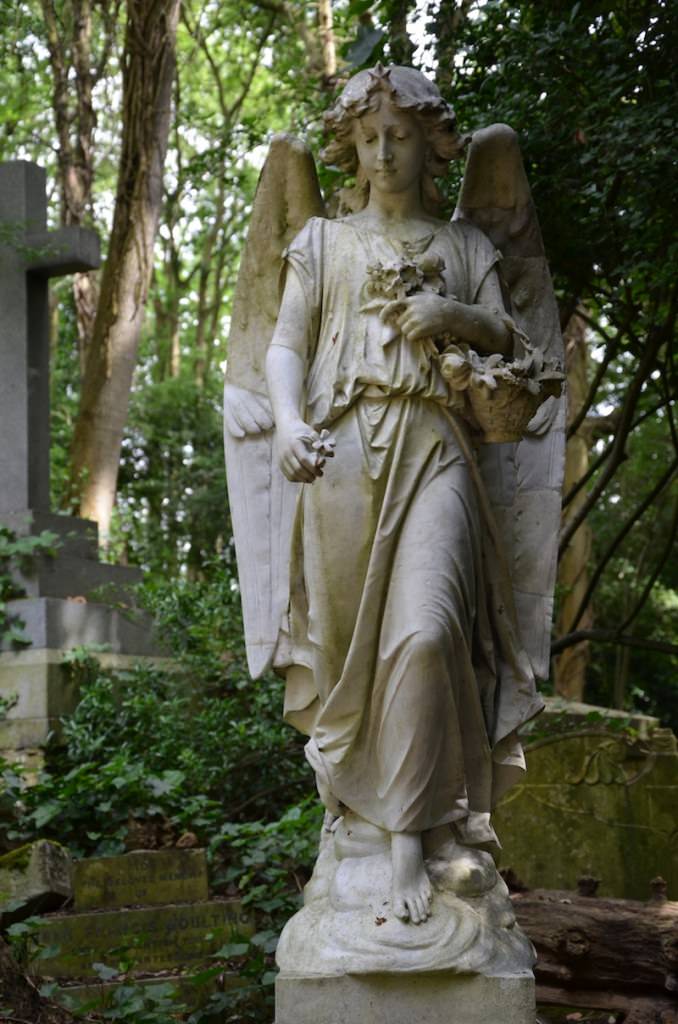 Still an operating burial ground, Highgate was the third of a ring of seven private Victorian cemeteries to be opened around London. The cemetery exists in two separate areas, the Old Ground or Western Cemetery and the new Ground or Eastern Cemetery, divided by bustling Swain’s Lane. Stephen Geary and James Bunning designed the Cemetery, and Geary was buried there.

In its heyday, there were 30 burials per day, with vaults and graves under construction 24 hours per day. Neighbors complained of the constant noise; horseshoes clattering on the cobblestones, sextons digging, hammers ringing on bronze plaques, burial services, and incessant funeral processions that often drew thousands of people. 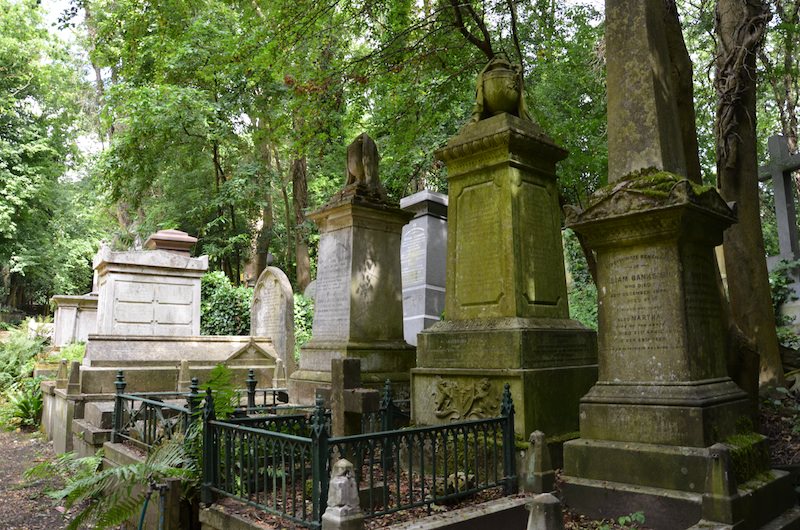 With these lush surrounds it’s no wonder that so many Victorians would take their Sunday promenade here, to “improve the moral tone”.

The most renowned funerary sculptors of the time—who have numerous statues at Highgate—were Millward of Swain’s Lane and Henry Daniel of Church House.

A visit to London’s renowned Highgate Cemetery provides a memorable experience. Lying on a 400-foot hill overlooking London, Highgate Cemetery came—within a few years of its inception in 1839—to be regarded as one of London’s finest and most unique tourist attractions. And it remains so today largely due to The Friends of Highgate Cemetery and its small and dedicated staff.

What a great website! We love travelling to Europe. Planning another trip to London soon.....with a few days in Liverpool! Big Beatles fan! I'll stop by often for sure! Len

Thanks so much! It is nice to be appreciated.