Next time you’re in London’s East End, take a moment to soak up London’s street art. It’s bold, witty and often subversive, much like the city itself. The works of artists who revel in pseudonyms like Jimmy C, Stik, Ronzo and, of course, Banksy, have turned the formerly mean streets of Spitalfields and Shoreditch into a continually evolving open air art gallery. 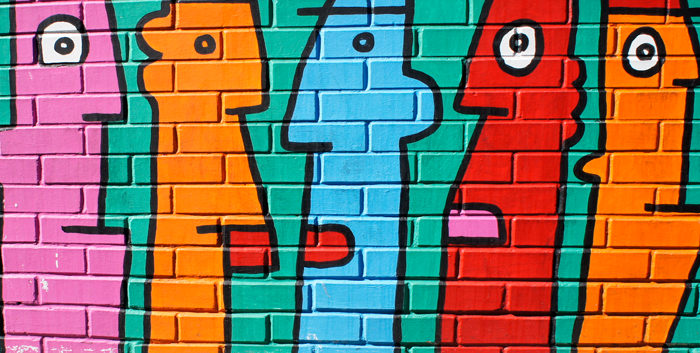 Once, not so long ago, the East End of London was a gritty, grimy sort of place, known primarily for its poverty, overcrowding and air of industrial decay. Rogues and crooks and artful dodgers inhabited it, in the popular imagination at least, and tourists rarely ventured into its dark, Dickensian streets. How things have changed. The area has undergone a startling transformation over the years. The arrival of new creative industries and investment has seen the East End take on a new lease on life. The coming of the London Olympics to Stratford in 2012 merely put the finishing touches to the ongoing revitalization of a long neglected area. 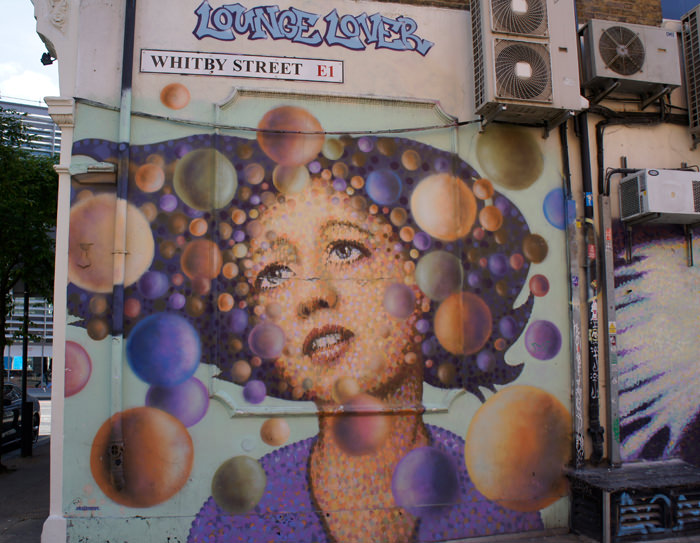 Today’s East End is a dynamic and bustling part of the city, and well worth a visit. It isn’t pretty and parts are still rough and poor, but it has a vitality that’s hard to ignore. And what better way to get to know the area than a tour of its vibrant and colorful street art? Despite all the gentrification, the East End has retained its grittiness and rebellious air, and it comes as little surprise that it is home to some of the most flamboyant and eye-catching street art in the country. Strictly speaking, street art is illegal, so of course the East End would take to it with relish. So much relish, in fact, that there are a growing number of street art tours to choose from. London Walks is just one of many, although it is probably one of the most straightforward. All you have to do is choose the tour you want to follow, and turn up at the allotted time and place. 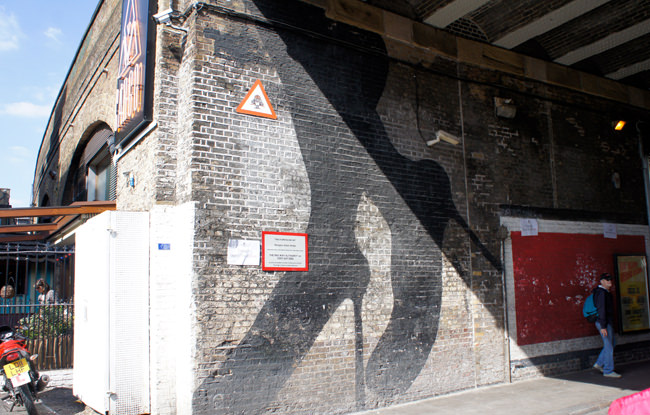 High heels under the railway bridge

I turned up outside Liverpool Street station to meet my guide, Anne-marie. Vivacious and enthusiastic, she was in no doubt about the quality of the work we would see. The streets of Spitalfields and Shoreditch are, she said, “the National Gallery of street art.” We began our tour at the Old Truman Brewery, ten acres of formerly vacant and derelict buildings that have been transformed into an artistic hub, full of galleries, markets and bars. It was a bright spring day, and the outside tables were full of people eating lunch and soaking up the sunshine. Behind them, the walls were adorned by a gloriously eclectic array of art, everything from arrows heralding the Olympics to a ceramic space invader to Banksy’s perspex-enclosed pink car. 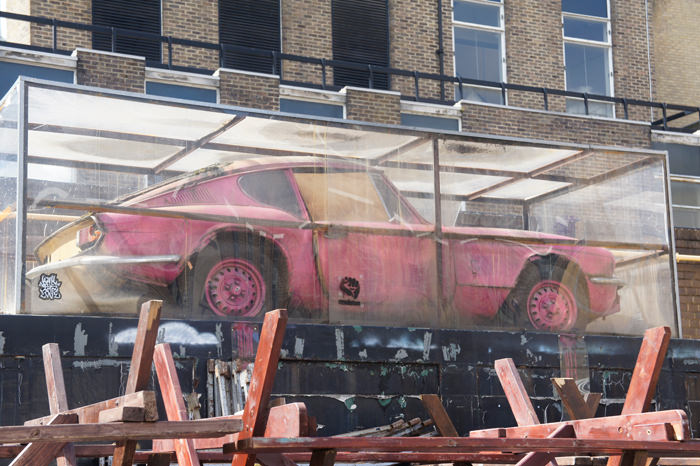 As a general rule, if a piece of street art is protected by perspex, it’s probably a Banksy. His works have always been in demand or, to put it another way, at risk of being stolen. Sometimes they are sold for considerable amounts, like the Kissing Coppers mural, which fetched £345,000 ($575,000) at a US auction after being removed from the wall of a Brighton pub. My favorite piece here is Ronzo’s ‘Crunchy’, perched high up on an overlooking roof. Dubbed the ‘credit crunch monster’, he is biting down on a giant pound coin. 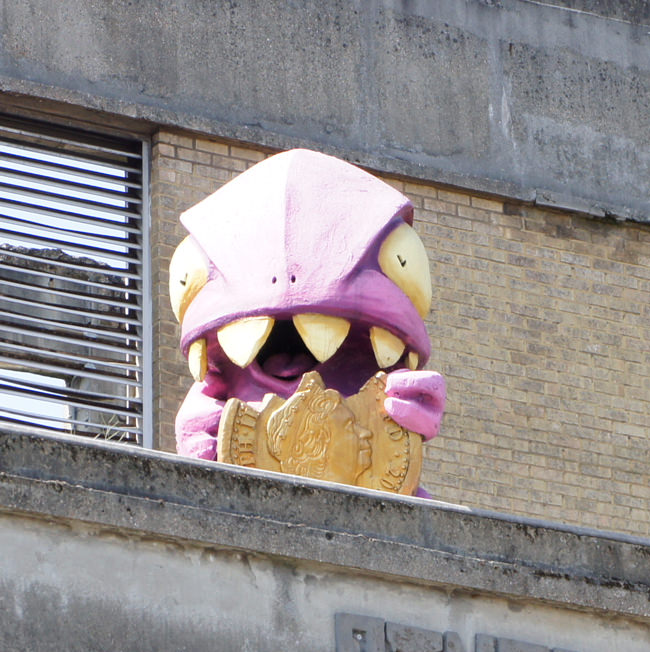 The credit crunch monster by Ronzo

From the Old Truman Brewery we made our way down Brick Lane, famous for its Indian and Bangladeshi restaurants. The area has long been an immigrant haven, dating back to the arrival of Huguenot refugees in the seventeenth century. Many of their handsome houses can still be seen, testament to their taste and success. Even the occasional figure by street artist Stik cannot detract from their gravitas. 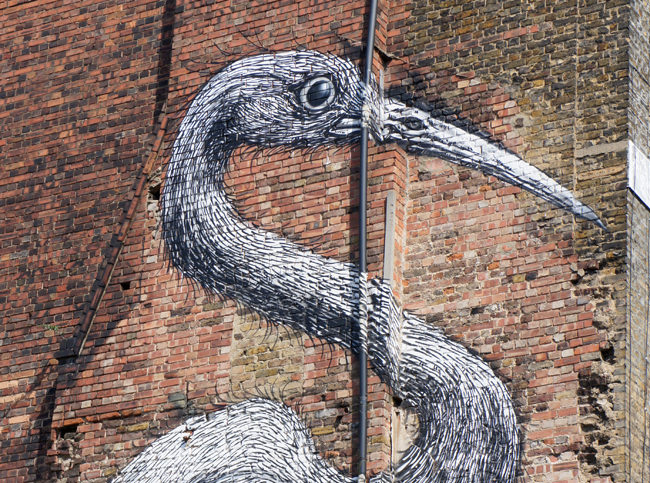 Hanbury Street, just off Brick Lane, is a prime spot on the street art trail. The Belgian artist Roa’s wide-eyed monochrome crane dominates the street from its position on the side of a building. It’s been here a few years now, and it’s started a trend. Just about every other wall is now covered with finely rendered art. 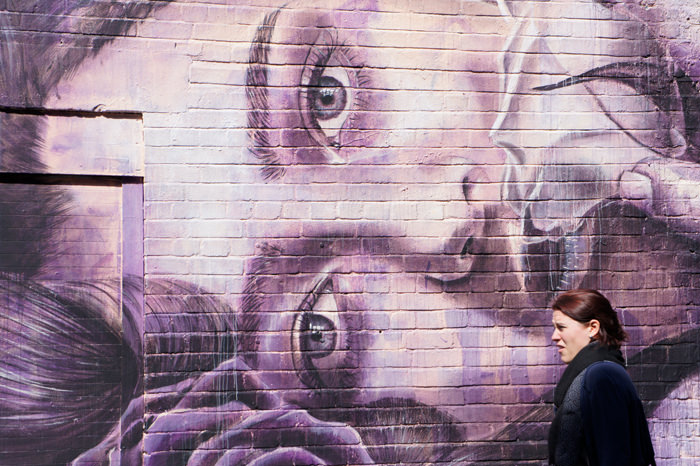 Street art is, by its very nature transient and ephemeral, at the mercy of the elements or an irritated officialdom. Lately, the local council has turned a blind eye, aware of the art’s tourist potential, but every so often works are erased or painted over. Murals and paintings come and go but, so far, Roa’s crane stays put. Back out on Brick Lane, we weaved our way through the weekend crowd.  Progress was a continual negotiation between cars and pedestrians and all manner of street stalls selling cold drinks and sizzling meats, jaunty hats and intricately decorated rugs. We passed by countless open-fronted restaurants, their scintillating smells an invitation to return once the tour was over. We turned down narrow side roads and after a while we got used to being startled by one of Roa’s rodents or a robot mural or the huge letters of Ben Eine, the master of fonts. Even the fiercest designs looked bright and cheerful in the spring sunshine. Local creativity has been given free reign in London’s East End and my only thought at the tour’s end was “Long may it last.”

Written by and photos by  Paris Franz for  EuropeUpClose.com Paris Franz is a freelance journalist based in London.

Woe! this is amazing street art. It looking so creative. Thanks for sharing this post.

[...] I’ve taken advantage of the glorious spring weather the last couple of weeks, making sure I get out and about the city. Last week saw me touring the streets of the East End and taking a lot of photos of the abundance of street art in Spitalfields and Shoreditch. You can read about my tour over at Europe Up Close. [...]

I've just started getting intrigued by street art in different cities. I like trying to decipher the underlying messages or the artists' mindset at the time

Thanks - this is a must. Art, freewheeling creativity, political statements, humor. I had no idea.

This place looks amazing! I don’t know how I never heard of it.