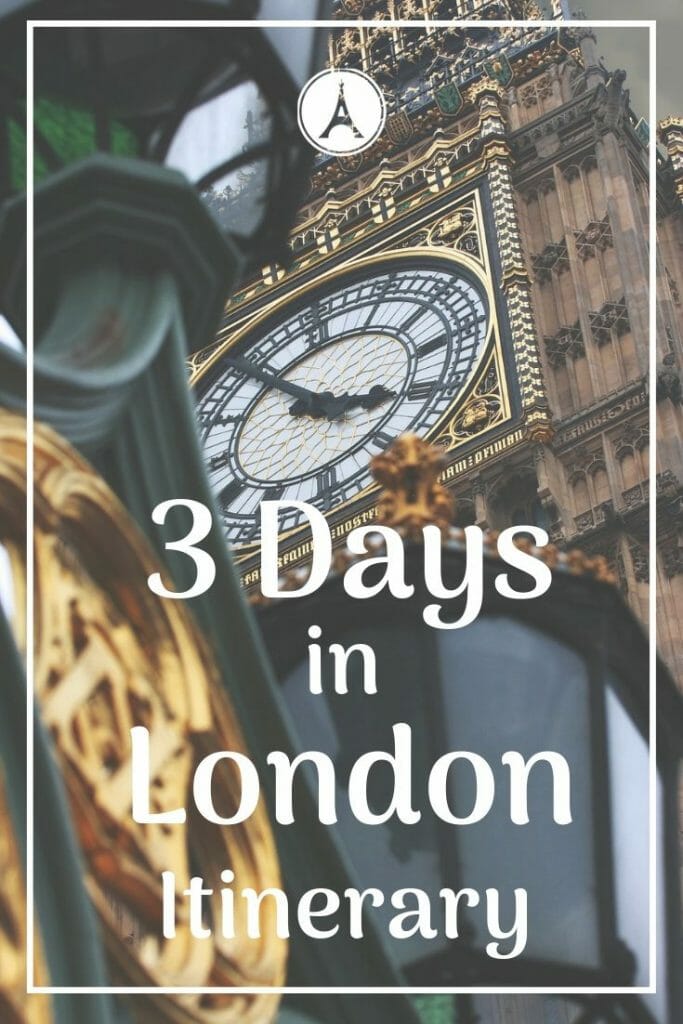 Plan Your 3 Days in London Itinerary

London is on everyone’s list of travel destinations. According to VisitBritain, there were 37.5 million visits in 2018 to London and 38.8 million forecast for 2019. Where are all these visitors going? What is the “perfect” London itinerary?

There are so many fun and interesting things to do in London. You may be asking yourself about what to see and do in London in 3 days. Lucky for you, in this article, I will describe some of the things we did on our recent 3-day trip. Obviously, we just scratched the surface, but we will give you some ideas to consider when you come to visit London.

By deciding what you want to see and do beforehand, and then planning out each day, you can make the most out of whatever time you do have available.

Best Hotels in London for Any Budget

Hotels in London can be quite expensive, but staying centrally is worth the cost as otherwise, you lose too much time to get to the city. Here are some of our London hotel recommendations for any budget:

Skip The Line Tickets in London

The top attractions get particularly busy in the peak holiday and vacation times, so we recommend the London Pass to ease your worries.

For planning, saving money, and making the most out of your time in London, the London Pass is highly recommended. With access to over 80 London attractions at huge savings over prices at the gate, for most people, the London Pass is a great deal. If you get the London Pass with Oyster Card, you can use the Tube as well. If not, you simply use your credit card to swipe at each Tube station.

For our trip, we downloaded the pass on our cell phone, and just showed it at the entrance to get in. Pass holders are able to bypass the long lines at some of the most popular attractions, including the Tower Bridge Exhibition, St. Paul’s Cathedral, Hampton Court Palace, London Zoo, London Bridge Experience, and Kew Gardens.

Tours With the London Pass

One of our favorite perks of the London Pass was the free Hop-On Hop-Off Buses. With live or audio commentary, useful maps, and descriptions of the stops, we were excited to leave the driving to the experts while we relaxed and saw more of this historical city. We even downloaded the Big Bus App, which shows the current location of each bus, maps, and helpful suggestions.

For example, one sample itinerary for the day started by taking the Big Bus from the southeastern corner of Hyde Park to St. Paul’s Cathedral. After exploring this marvelous church, we hopped back on the bus and crossed the Thames, where we got off to observe the views from the tallest spot in London, The Shard. Next, back on the Big Bus, we crossed over the Thames River on Tower Bridge and stopped at the Tower of London, where we saw the Crown Jewels, the “Bloody Tower,” and other historical exhibits.

Changing our mode of transportation, we then jumped on the nearby River Cruise on The Thames and headed west to the Westminster Pier. After departing the boat, we continued by foot south and westward, stopping at Big Ben, Palace of Westminster aka the Parliament, Westminster Abbey, Westminster Cathedral, and onto our next stop.

The Buckingham Palace is the London residence and administrative headquarters for Her Majesty, The Queen. The Palace is the focal point for many national and royal celebrations, and the location of the Changing the Guard ceremony. Public tours are available during the summer months and for a limited number of tours in December, January, and at Easter each year.

St. Paul’s Cathedral is an Anglican church and is the mother church of the London Diocese. It sits atop Ludgate Hill, the highest point in London. The present cathedral was designed by the famous architect Sir Christopher Wren in the late 17th century, replacing the former cathedral on the same site that was destroyed in the Great Fire. At 365 feet tall, it was the tallest building in London from 1710 to 1967. It has the second-largest cathedral dome in the world and is the second-largest cathedral in the UK after Liverpool Cathedral.

Whether enjoying the views from the Golden Gallery 528 steps up or down below in the crypt, the history and fabulous architecture of this Christopher Wren masterpiece will inspire you. Lord Nelson, heroic naval leader, sculptor and artist Henry Moore, painter Joshua Reynolds, and countless military, artists, and community leaders are interred at St. Paul’s.

One of the most popular tourist sites is the Tower of London, first built by William the Conqueror in 1066 after his conquest of London. It has served as a secure fortress, a royal palace, the Royal Mint, a zoo, home of the Crown Jewels, a prison, and more in its long history.

The stories of kings and queens who imprisoned their rivals and enemies still haunt the Tower. Tower prisoners buried here include three Queens: Anne Boleyn, Catherine Howard, and Jane Grey, who were executed in the 16th century. In addition to taking the throne for himself, Richard III reportedly imprisoned and killed his two nephews, aged 10 and 12.

With over 1,000 years of history, Westminster Abbey has played an integral part in the story of Great Britain. Many important national events, including coronations, royal weddings, and more have taken place in this beautiful abbey just west of the Thames River.

Prominent people buried in Westminster Abbey include Sir Isaac Newton, Mary, Queen of Scots, Charles Darwin, and many others. Most of England’s monarchs were buried at Westminster or Windsor Castle. It was named a UNESCO World Heritage Site in 1987 along with St. Margaret’s Church and the Houses of Parliament.

In addition to being the home of eloquence, fine dining, and luxury touches throughout the hotel, St. Ermin’s has a long and storied history for Brits. With a recent 30 million pound renovation, the tree-lined entrance welcomes visitors to this 4-Star deluxe hotel just minutes from the St. James and Victoria Station. Westminster Abbey, Parliament, Big Ben, and the River Thames are also close by.

The history of St. Ermin’s is fascinating. In the 1940s, Winston Churchill led a group of Special Operations Executive (SOE) during WW2, taking over an entire floor of the hotel. At the same time, MI6 conducted operations two floors above. There is even a rumor about a secret underground tunnel. Reputedly, it runs from under the grand staircase all the way to the house of Westminster. They even have a special espionage tour offered by the hotel.

As a member of Mariott’s Autograph Collection Hotel, guests are eligible for the Marriott Bonvoy loyalty programs. I was struck by the intricate rococo plasterwork on the ceiling and walls of the hotel.

The beautiful woodwork, grand staircase, balconies and sparkling chandeliers throughout the lobby and hotel are other striking features that make St. Ermin’s special.  Another interesting feature of St. Ermin’s are the rooftop beehives and gardens for fresh honey and produce for the hotel’s kitchen.

As one would expect, The Caxton Grill, the beautiful restaurant at St. Ermin’s, is also a first-class operation. The European menu offers a classic menu featuring steak, seafood, and other dishes made with top quality, seasonal ingredients.  The Turbot with Squid Ink Crust was delicious. Likewise, the selection of other fish and meats grilled on the special Josper Oven were also mouthwatering. Cooking on the Josper retains moisture and preserves tenderness, resulting in extra tasty food.

While the Globe Theatre, Shakespeare’s home theater located at the stunning Millenium Bridge on the Thames, gets a lot of attention, The Queen’s Theatre is a true gem as well. With all of its great history, architecture, and other attractions, this theatre also has to rank high on the list of must-dos in London.

We were fortunate to take in Les Miserables at The Queen’s Theatre during our visit. After a very pleasant dinner at nearby Brassiere Zedel, we walked through Piccadilly Street on the West End to the theatre.

Often described as “The Times Square of London,”, the whole area was brimming with activity and excitement. The show was fantastic – the acting, singing and the sets were all fabulous. Fitting for a show that holds the records for longest-running musical in the history of London theatre. After your show, head over to Leicester Square, Picadilly Circus or Trafalgar Square (next to the National Gallery) for some more entertainment.

Additional London Attractions to add to your London Itinerary:

London is full of energy, history, mysteries, and fascinating people and has to be part of any England itinerary. What English writer Virginia Woolf said is indeed true about London.

“The streets of London have their map, but our passions are uncharted. What are you going to meet if you turn this corner?”

Plan Your Trip to London with our 3 Days in London Itinerary was written and photographed by Scott Kendall.

Disclosure: The author was hosted for a complimentary meal at Caxton Grill in the St. Ermin’s Hotel, and received free London Passes for admission to many of London’s top attractions.

Plan Your 3 Days in London Itinerary – Pin for Later