Any in-the-know tourists will tell you that Belfast in Northern Ireland is a hidden paradise, full of history, ambience, and hospitality. There are a ton of things to do in Belfast. The city is the only United Kingdom entry listed in Frommer’s top touristic 12 destinations for 2009. And frequent express trains connect Belfast with popular Dublin in less than two hours. While a day is simply not enough to fully experience the charms of Belfast – here are some tips and suggestions should you wish to spend the perfect day. 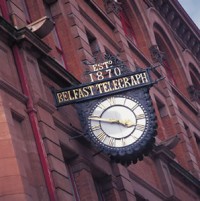 Belfast is the capital city of Northern Ireland, a country on the island or Ireland that belongs to the United Kingdom. It is the largest city in Northern Ireland, a nation full of stunning landscapes and natural phenomenon. Although known for its more troubled times, the Good Friday Agreement in 1998 has brought peace and prosperity to Belfast.

What to See in Belfast

Donegall Square is the epicentre of Belfast and home to City Hall, the city’s council chambers and administrative offices. The square hosts the Christmas Market and numerous other festivals and events throughout the year. In 2008, Belfast opened its own Big Wheel, beautiful enough and of sufficient size to rival the London Eye. It is situated just off of Donegall Square and offers fantastic views of the city.

Another important site – and a scar history has left on the city – is the “Peace Lines”, where the Republican and Loyalist neighborhoods met. An imposing, two-story fence remains here as a reminder of the past, but the more interesting sight to see are the many murals which read like a pictorial encyclopedia on Belfast.

Belfast Exposed, the only gallery in Northern Ireland dedicated to photography, is contained in an open, edgy warehouse which makes for an excellent photo exhibition space. Heading south, the controversial Ulster Museum, near the Botanic Gardens, features an excellent display of information on the previous conflicts in Northern Ireland (the museum is currently closed until spring 2009.)

Where to Eat & Drink in Belfast
While in Belfast, one would be remiss for not having sampled an Ulster Fry. The heart-stopping concoction includes fried eggs, black and white pudding, baked beans, and fried tomatoes. And you will want to wash it down with a builder’s tea – strong with milk.

For the evening, start off at The Apartment, a pub located above City Hall, where one can enjoy some of the best night-time views of Belfast.  The trendy environment is a complement to the rustic, old-world pubs of the city which can be explored afterwards.

Then head for a meal at Molly’s Yard, where you’ll find traditional Irish cuisine in a relaxed atmosphere. It is Belfast’s first micro-brewery and Ireland’s smallest micro-brewery. A popular drink order is a Baileys, the liqueur popular world-wide and produced here in Belfast.
1 College Green Mews
Botanic Avenue
Tel:+44 (0)28 9032 2600

Getting Around Belfast
The public transport system is to standard, but many tourists are now opting for the Black Taxi Tours, where a driver will take you to many of the various sites and attractions in an old-style black cab.

Otherwise, consider walking, as Belfast is a compact city, pretty easily navigated on foot. It is no surprise that visitors are spoilt for the choices and the number of walking tours available. One of the best is the Historic Pub Walking Tour , which explores some of the (in)famous and historic pubs and it is a great way to learn about the city’s people. Or, just take in a stroll in the Victorian grandeur of the Old Town.

Further Afield
If you only choose one thing to see outside of Belfast, make it the Giant’s Causeway. This strange rock formation lines Northern Ireland’s coast and is the only UNESCO World Heritage site in the nation. The name is based on a myth that the stones jutting up from the sea are the end of a former bridge that went to Scotland built by giants. To access the site, take a drive on the M2 to Newtownabbey, then the A8 to Lame. From Lame the A2 hugs the coastline for miles of uninterrupted views.

Where to Stay in Belfast
Should you wish to spend the night, why not splurge and head for the Merchant Hotel , housed in the grandiose former Ulster Bank Headquarters. For those on tighter budgets, the Travelodge on Brunswick Street is in a superb location for great rates.