Not as well known as the larger Canary Islands, Lanzarote, Spain is perhaps the most fascinating. A week’s worth of attractions make up for its having fewer beaches than its more sand-surrounded neighbors. 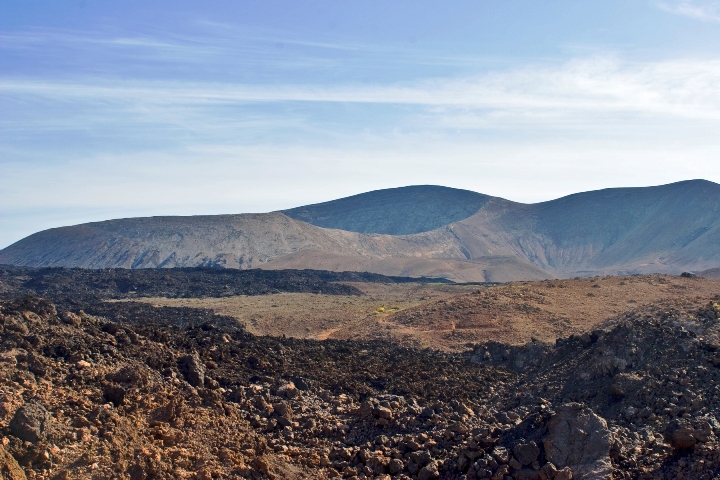 Two separate factors contribute to the abundance of things to do there. The first was six years of continuous volcanic eruptions in the 1700s and the second was local artist Cesar Manrique, who was determined to protect the island from the touristic excesses that had raged in many parts of mainland Spain’s Mediterranean coast. Where art meets volcano, these two influences blend to create Lanzarote’s most exciting highlights.

But first a little history. Until the night of September 1, 1730, central Lanzarote was covered in prosperous villages of farmers, vintners and herdsmen. That night, near the town of Yaiza, the ground opened up and shot out molten lava that poured across the farms and engulfed entire villages. Mountains rose up, lava spewing from cones that continued to grow as new ones formed around them. The fiery terror continued for the next six years.

By April of 1736, the island was an empty wasteland. Those whose farms and homes had not been buried, had been driven off the island by the asphyxiating clouds of smoke, deadly gases and boiling rain. When the land cooled and they began to return, farmers found 22 villages completely destroyed or seriously damaged, and miles of previous farmland covered with deep rivers of black lava that had hardened into a jagged sea of black rock called malpais, so rough and unstable it couldn’t be walked or built on. The rest was covered in thick layers of coarse ash. 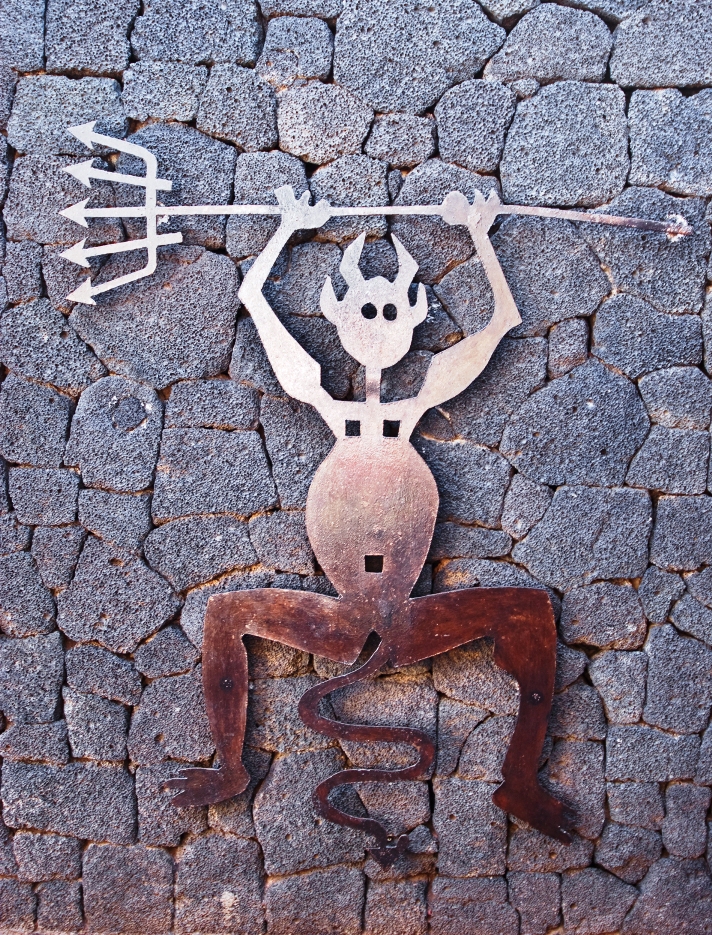 Today, Timanfaya National Park protects Montanas del Fuego, mountains of fire, miles of this volcanic wasteland, and a moon-like landscape where only occasional plants have begun to sprout. In its center, atop a volcanic cone from whose vents and fissures still issue the heat from the seething magma below, a mirador overlooks a swirling sea of solidified lava.

At this summit of Islote de Hilario, park guides demonstrate how close the still-molten lava is to the surface, where in a mere few inches, the temperature reaches 284 degrees F. Water poured into a pipe immediately explodes in geysers of steam, and chicken sizzles on a grill over a hole in the ground. We tucked into a generous portion of this volcano-roasted chicken at Restaurant El Diablo, while looking out over the panoramic view of the lava fields. The striking restaurant is one of the island’s many buildings designed by the artist Cesar Manrique. 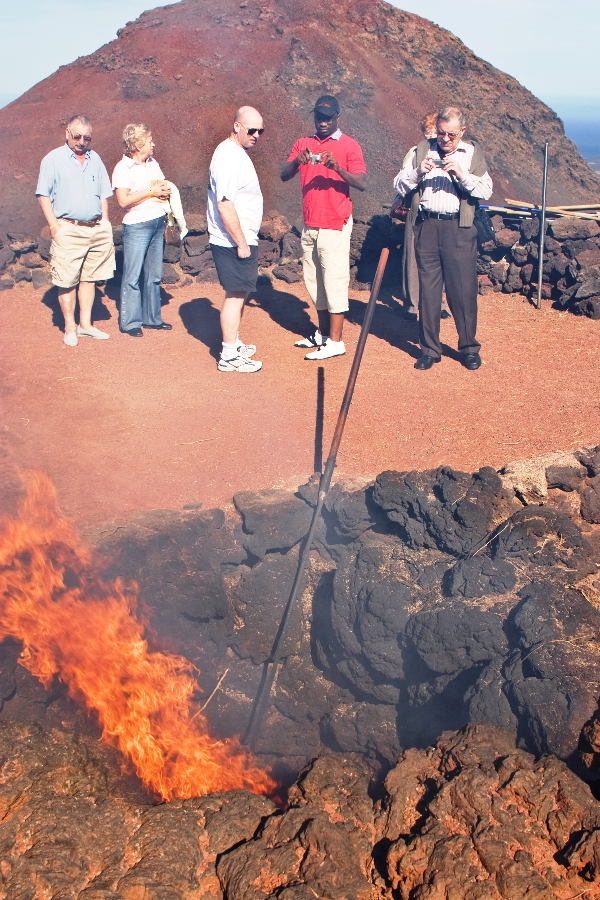 Narrated ‘Route of the Volcanoes’ bus tours, included in the park admission fee, begin at Islote de Hilario, stopping to show fissures, volcanic tubes and other lava formations. Tubes, called jameos, are giant tunnels formed by molten lava and gases trapped beneath the surface crust. As the upper lava cooled on contact with air, it continued to flow below, emptying the tube into the sea and leaving a shell that hardened into brittle lava caves. Such hollow tubes are found all over the island, some of them used by the artist Cesar Manrique as the basis for one-of-a-kind architectural landmarks. 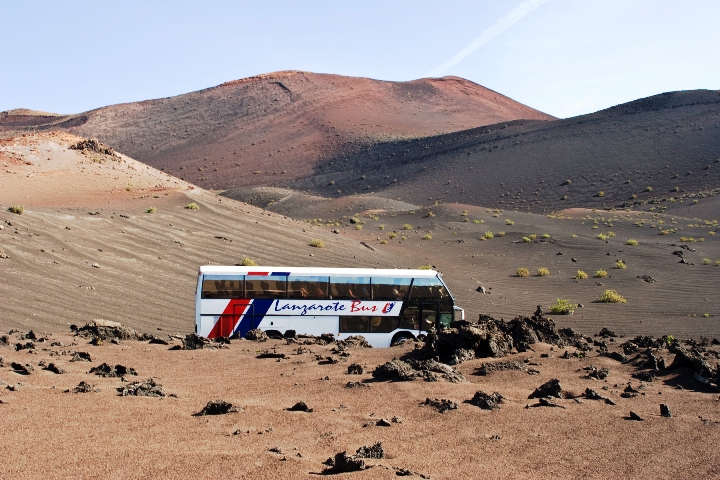 Learn about the volcanoes and how they transformed local culture and economy at the park headquarters, Museo del Visitante at Mancha Blanca. The museum shows how volcanoes are formed, through interactive displays and a cut-away model. A relief map shows ages and activity dates of all the Canary Island’s volcanoes. 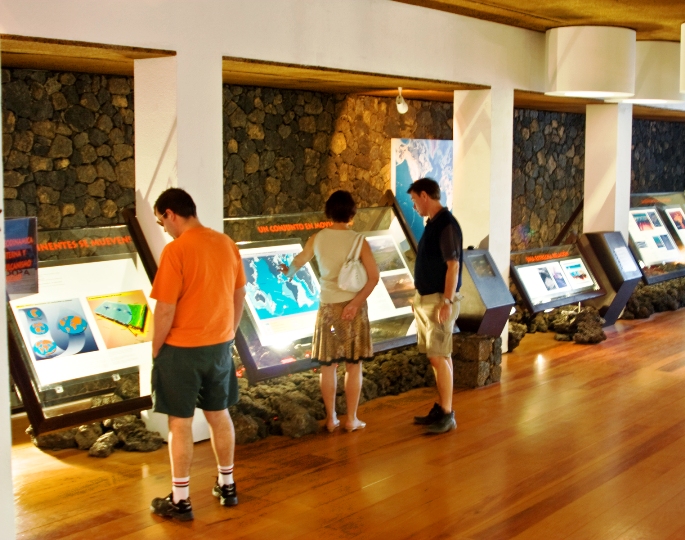 Outside the Timanfaya National Park, other natural wonders were left by the volcanoes. At Los Hervideros, on the nearby coast, a lava tube enters the sea to form deep sea caves and blow-holes in the jagged black rocks. Heavy surf shoots upwards through the sea caves, forming geysers of flying foam, and an incessant attack by the sea on the porous solidified lava that breaks and carves the brittle stone into an ever-changing cliff pocked by caves and sinkholes.

Just up the coast at Charco de los Clicos, the rim of a volcanic crater collapsed into the sea, leaving a green lagoon inside a cliff-backed cove. In the cliff are the layers of geologic and volcanic history, now worn into weird shapes and stripes by the sea and wind. On the beach below this rocky amphitheater, you can hunt for peridots on the beach. The constant tidal action churns the coarse sand and beach stones, turning up a fresh lot of these tiny green semi-precious stones every day. Even without the gems, Charco de los Clicos is one of the island’s outstanding scenic attractions.

Elsewhere on the island, such natural wonders have been transformed into cutting-edge modern art by artist Cesar Manrique, creating a dual personality for this small island.

This is wonderful historic information Lanzarote Spain. A great read.