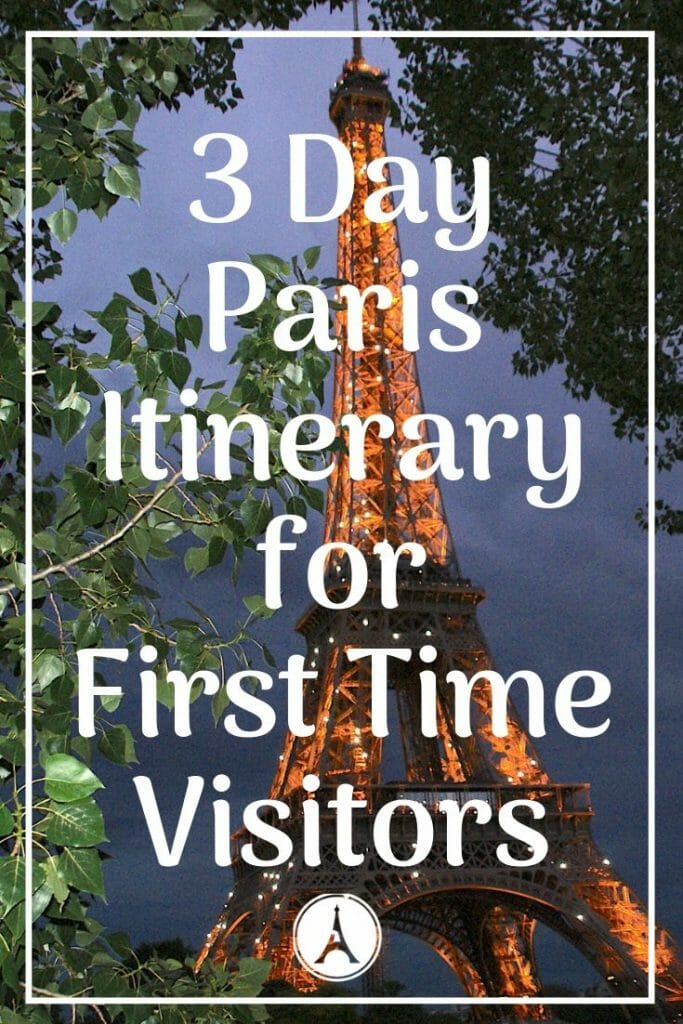 As we walked hand in hand along the Seine River at 10 at night, the Eiffel Tower erupted in a dazzling display of light and music. The darkness had just fallen on Paris and the twinkling light show was the perfect ending to our first night in the City of Lights. As we took pictures, dodged bicycles, and ignored the vendors selling cheap imitations of the tower, we smiled at the scene before us.

This was my first trip to Paris. Since we were only staying three days before we moved onto other adventures, I wanted to make the most of those short days and I am sharing my 3 Days in Paris Itinerary for First Time Visitors with you to help you make the most of your trip as well.

The map below highlights most of the places we saw on this trip. Of course, we added many more along the way as we wound our way through the arrondissements. 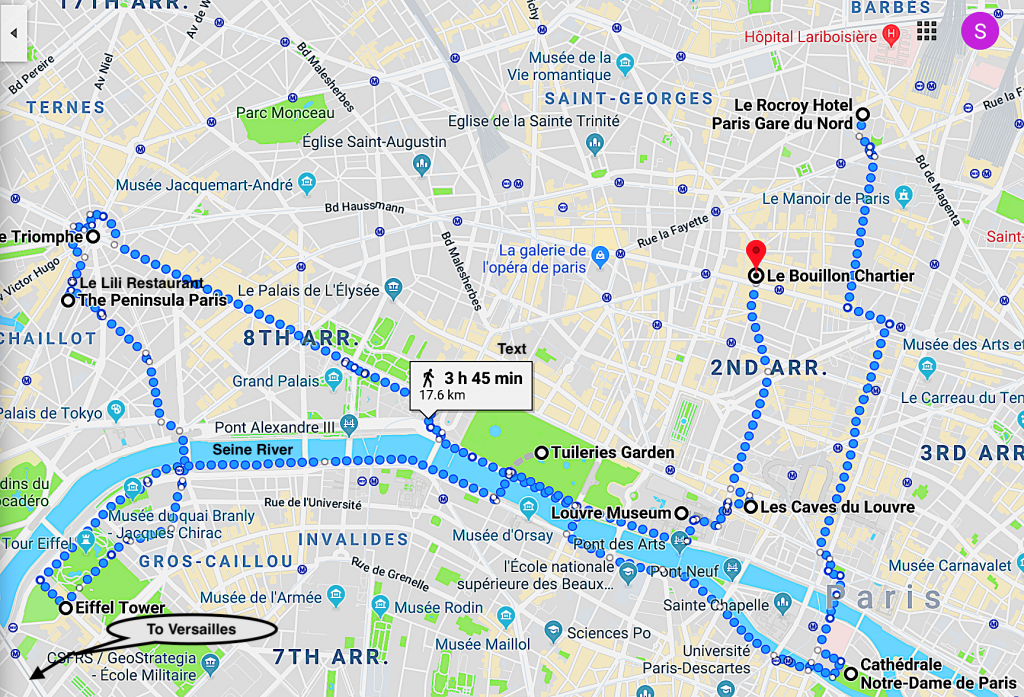 After our great experience with the London Pass, we used the Paris Pass on our visit to the city of lights. Used by over half a million people, the Paris Pass saves users time and money. It also helps make your visit easier and more memorable. With free admission to over 60 top attractions and tours, the Paris Pass helped us make the most of our time in Paris. Read my full review of the Paris City Pass and whether it is worth it, here. 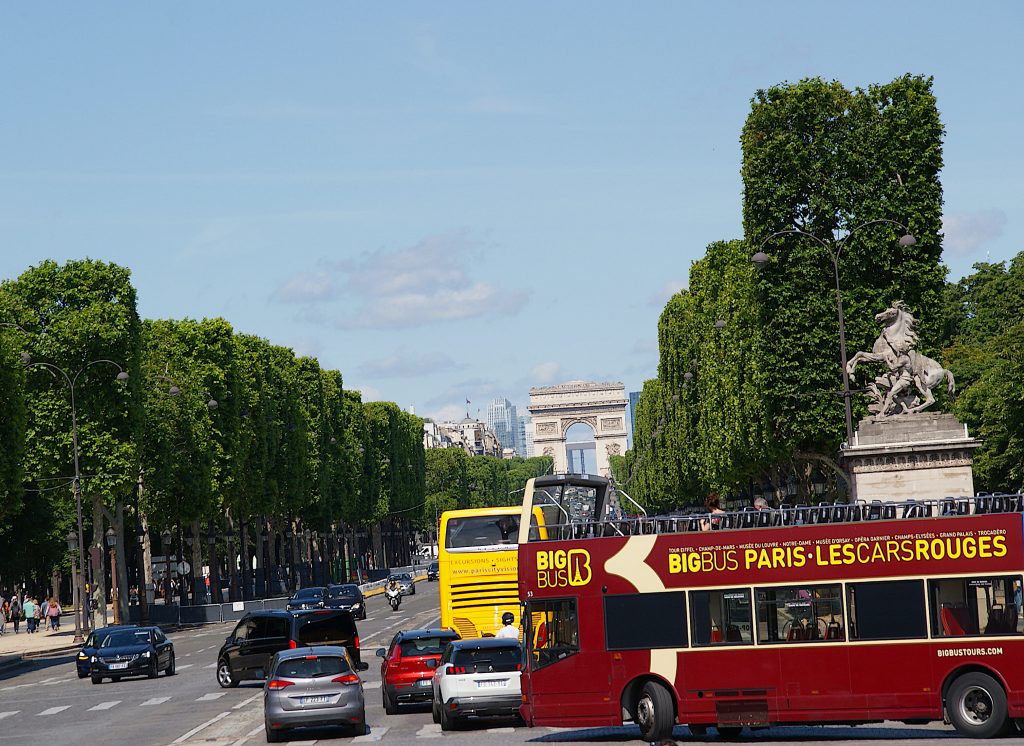 We used the Paris Pass for the Big Bus Hop-On Hop-Off tours to get around the city. The pass gave us free admission to The Louvre, the Arc de Triomphe, Versailles, a Seine River Cruise, St. Chappelle, and so much more. It even provides for transportation within central Paris on the subway, trains, and buses.

On our first full day in Paris, our first destination was Notre Dame. The interior had suffered massive damage in the fire just months before our visit in that terrible tragedy. But we were still very excited to see this Gothic masterpiece. This impressive structure, featuring the twin towers, flying buttresses, and gargoyles overlooking the city had been in danger of being destroyed in the early 1800s.

However, Napoleon chose to save the medieval church and held his coronation here in 1804. Victor Hugo’s book, The Hunchback of Notre Dame, brought more attention to the cathedral upon its publication in 1831. As a result, it led to a restoration project to save the ailing icon. 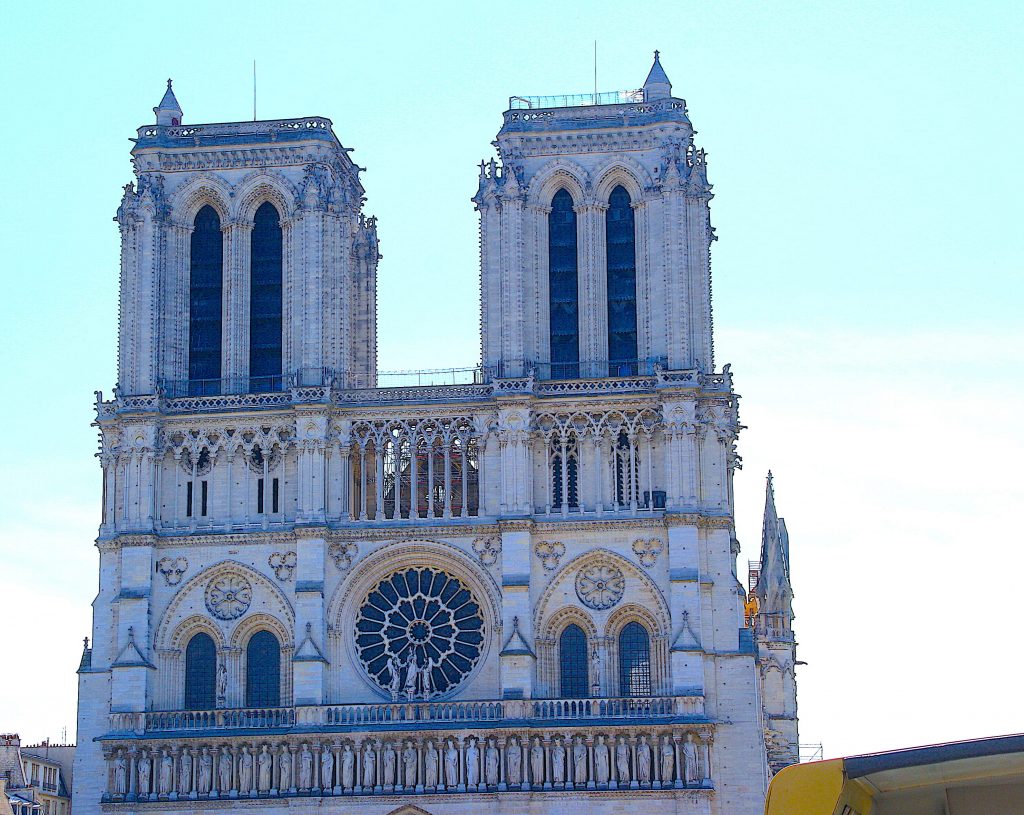 Home to the Mona Lisa and thousands of other masterpieces, The Louvre is the largest art museum in the world. It is also the most visited museum, with 15,000 visitors per day. It was originally built as the Louvre castle in the late 12th to 13th century by Philip II.

The building has been used for numerous purposes over the years. The modern glass pyramid juxtaposed against the old fortress serves as a fitting entrance to this world-class museum, connecting the old to the new. 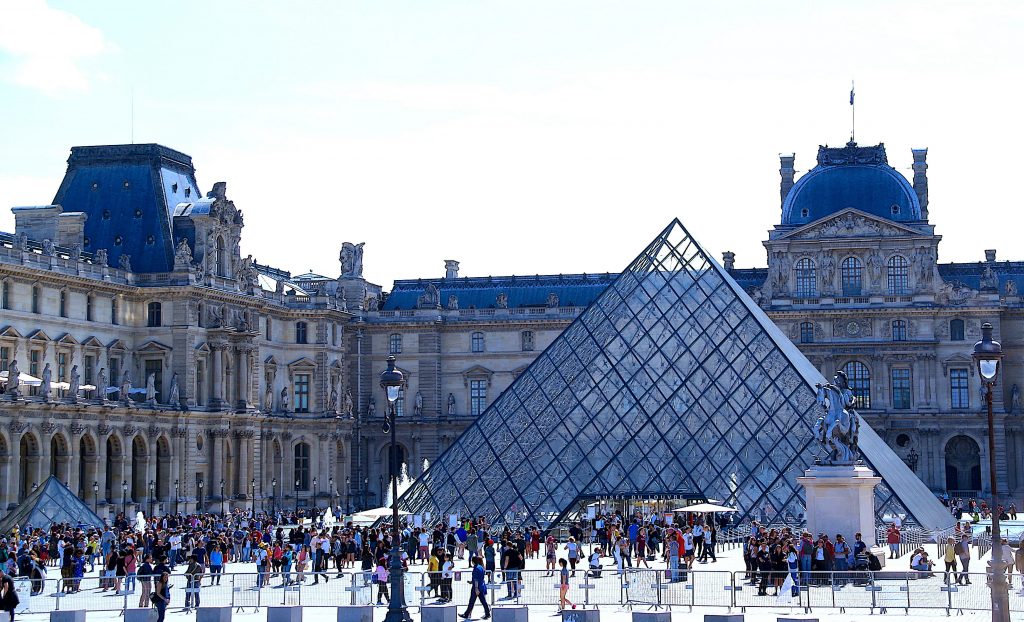 Driving west on the end of the Champs-Élysées towards Place Charles de Gaulle, the Arc de Triomphe looms high above the streets. The monument honors those who fought and died for France in the French Revolution and the Napoleonic Wars.

Beneath its vaults lies the Tomb of the Unknown Soldier from WWI. Visitors can climb to a small museum and the observation deck on top, with wonderful views of the city. 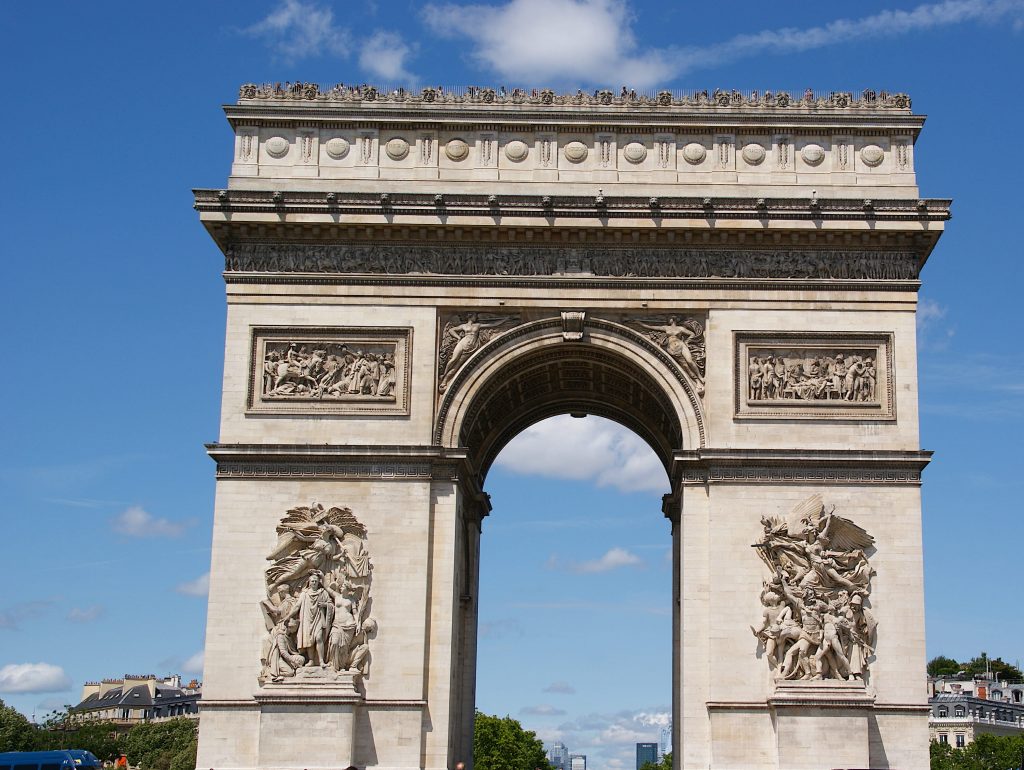 One of the most iconic landmarks in Europe, the Eiffel Tower stands 984 feet on the banks of the Seine River. Completed in 1889 for the World’s Fair, this wrought iron latticed tower was originally despised by many Parisians but is now seen as the global symbol for the city.

It was meant to be a temporary building to be torn down after the World’s Fair. To help convince Paris to keep the tower, Eiffel conducted scientific experiments in the fields of astronomy and physiology. Even more importantly, the tower was used as a radio antenna tower for military communications and commercial radio communications. 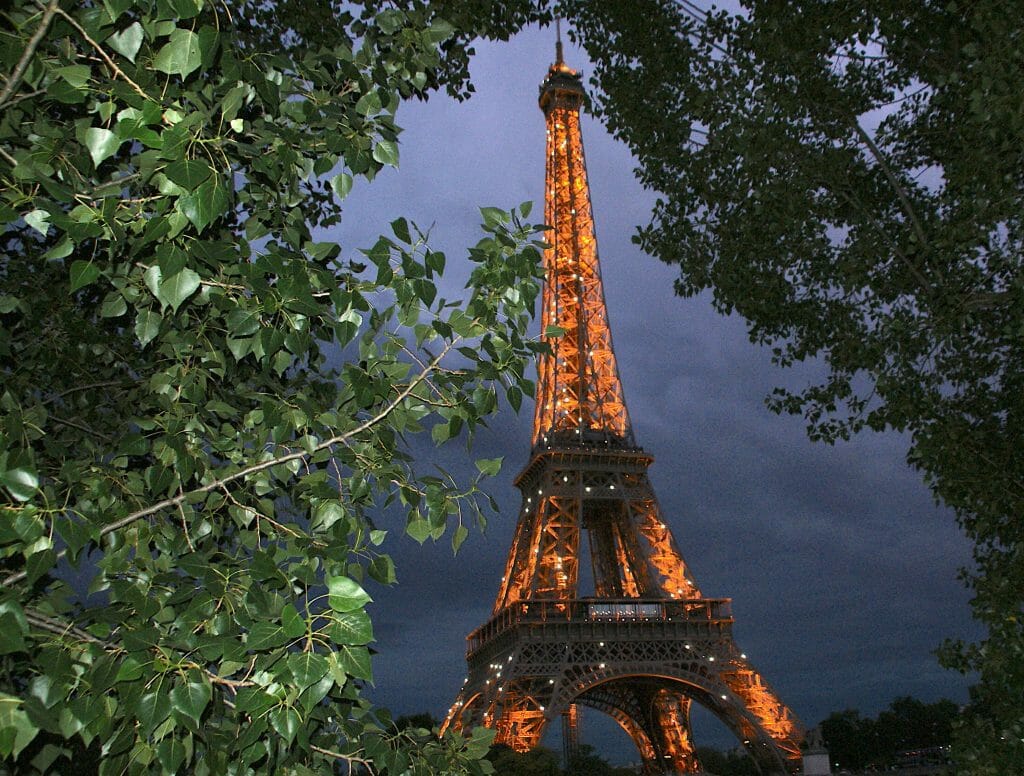 Eiffel Tower lit up at night

Getting Eiffel Tower tickets can be very confusing. There are 3 levels, stair access, lift access, skip the line and regular access. Which Eiffel Tower ticket should you get? Can you just walk up and buy it right at the booth? Here are some tips:

About seven million people come to visit the Eiffel Tower each year. Because it is so popular, lines are likely to be long, especially in the summer, but also during the off season. Buy tickets online to minimize your waiting time.

As this is your first visit to Paris, you want to explore as much as possible. Don’t waste hours in line waiting for attractions. If you have the Paris Pass, many attractions already give you priority access, but not the at the Eiffel Tower. While the non-skip the line tickets are cheaper (between 10.20 EUR – 25.50 EUR per adult, children under 4 are free), this is something you should really splurge on to make your first Paris trip as amazing as it should be.

It is also important to realize that a general ticket will get you to the first level and second level (via stairs or lift), but you must pay extra to take the elevator all the way to the top (summit access).

Don’t miss the spectacular light show, which lasts for five minutes on the hour from sunset to 1 am (2 am in the summer).

The Palace of Versailles was the official royal residence from 1682 until 1789, starting with the reign of Louis XIV and ending with Louis XVI. A UNESCO World Heritage Site, the palace is known for its Hall of Mirrors, the royal apartments, ornate décor, and extensive gardens. It is the second most visited landmark around Paris, right behind the Louvre but ahead of the Eiffel Tower.

Like other popular tourist sites, lines can be very long. Consider getting to the palace extra early in the morning, around 2:30 in the afternoon, or booking a guided group tour with skip the line access to limit waiting time. If you are there on a Saturday, you might want to check out the Versailles Fountain Show with music and fireworks in the magical gardens of Versaille Palace. 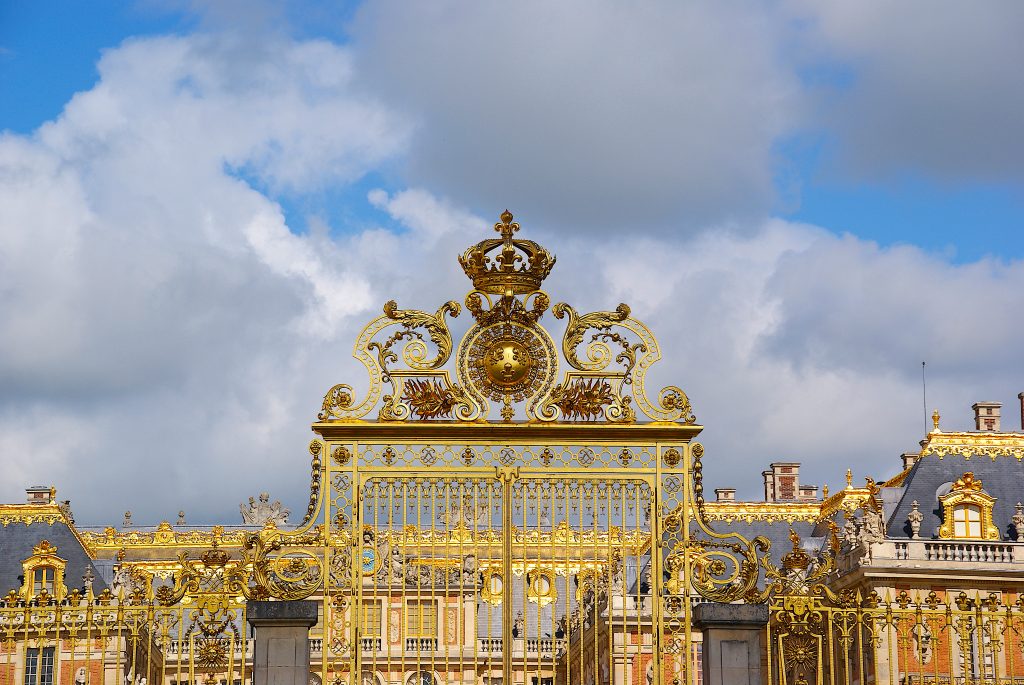 The Golden Gate entrance of the Palace of Versailles

Just a few blocks northeast of The Louvre at 52 Rue de l’Arbre Sec, you will find the fascinating hidden wine cellar Le Caves du Louvre. King Louis XV’s sommelier originally established this intriguing space.  Recently, it was renovated to give visitors an enchanting experience to taste and learn more about French wines. With the Paris Pass, we had a one hour tour in English and three glasses of beautiful French wine. You can also purchase a package to create your own wine, design your label, and go home with your own personalized bottle of wine. 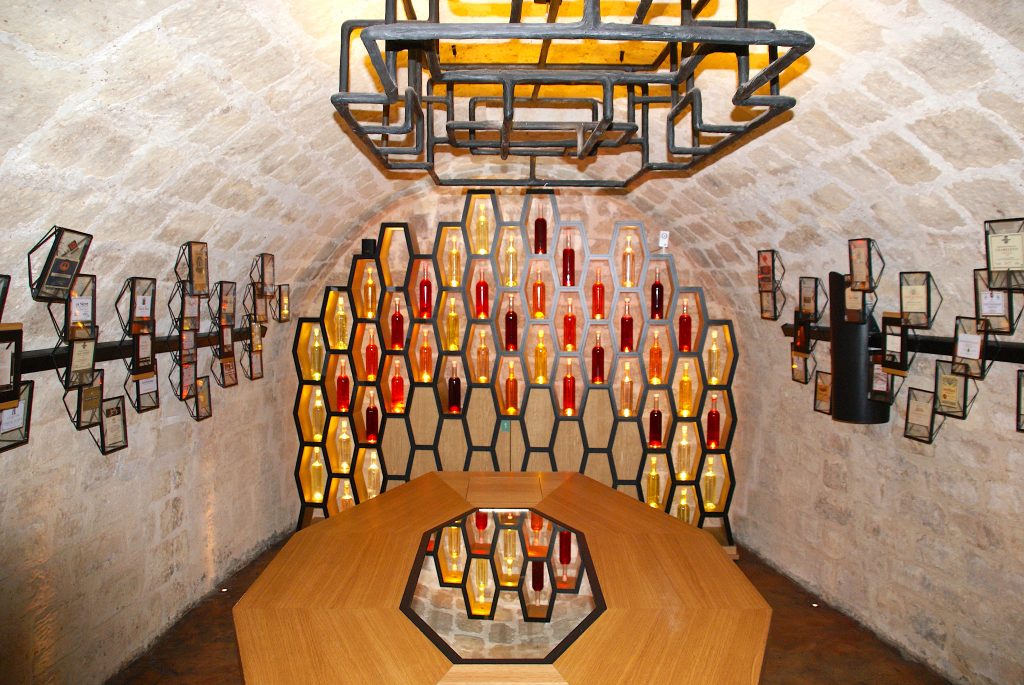 I loved how our guide did such a great job of explaining more about the different wine-producing areas in France. With an easy to follow map and explanations, our guide told us about the terroir, the grapes, and the conditions for producing the wines for which France is famous. Champagne, Burgundy, Bordeaux, Alsace, Beaujolais, and more, each producing its own unique wine. For a fun, informative, interesting time, check out Le Caves du Louvre.

Since we came across from London via the Chunnel, we wanted a hotel convenient to Gare du Nord, the large train station in the northern part of the city. We were delighted to find the lovely and affordable Le Rocroy Hotel just a few blocks from the train station at 13 Rue de Rocroy. In addition to being convenient to the Gare du Nord and Gare de l’Est train stations, the famous Sacré-Cœur and the Montmartre neighborhood is nearby. 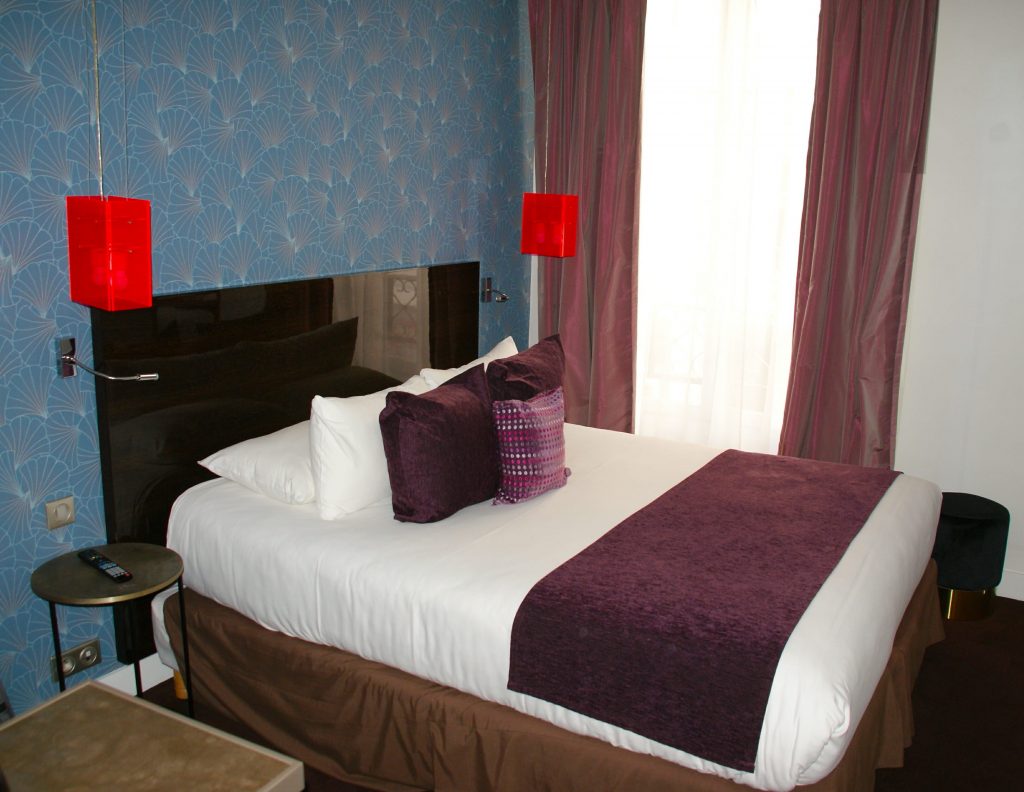 Lili at The Peninsula Hotel

Lili is an elegant Cantonese style Chinese restaurant located in the beautiful Peninsula Hotel. After our tour of the Arc de Triomphe, we walked the short distance to the ornate 19th-century building. With its convenient location near the Arc de Triomphe, the Eiffel Tower, and the Champs-Élysées, the Peninsula is a great choice for luxury in the middle of Paris. The restaurant is tastefully decorated with a Chinese and Western opera theme, a captivating combination of reds, blues, golds, and ivory. 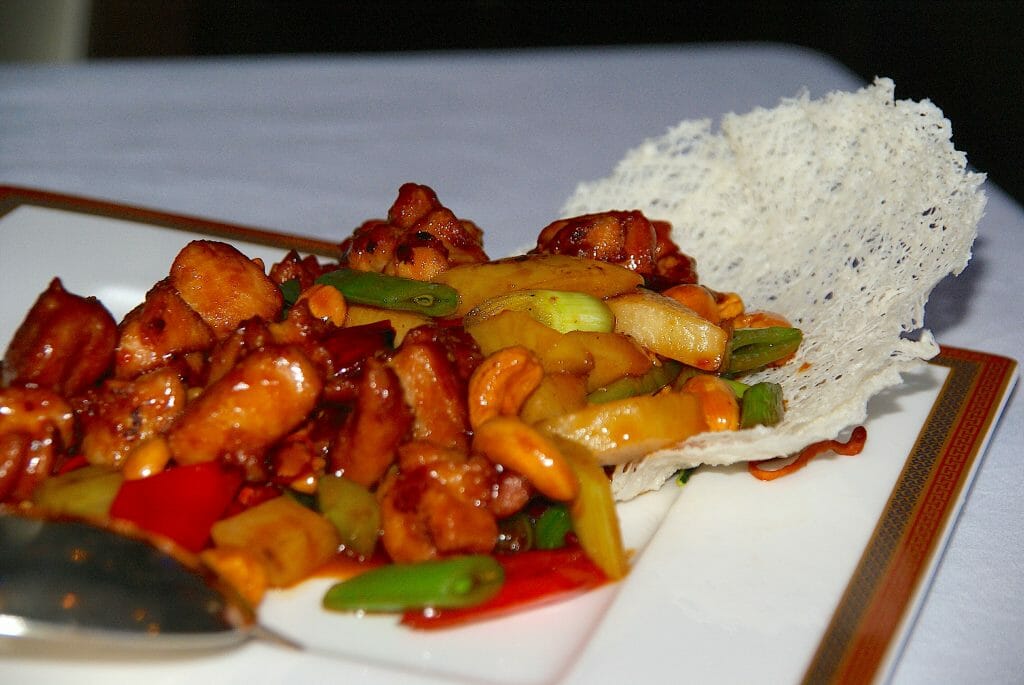 As expected, the staff was very friendly and knowledgeable. We began with a lovely Meursault and some caramelized pecans. Our first course was a trio of tasty Dim Sum. Langostino wrapped in a carrot dumpling and topped with roe, pork and chicken, and shrimp dumplings.

Next was the Cashew Chicken with asparagus and black mushrooms served with a flavorful fried rice. It was a perfect combination with a 2016 Rangen Grand Cru Riesling. We managed to capture our prey, despite our rusty chopstick skills. The Asparagus and cashews were especially elusive! 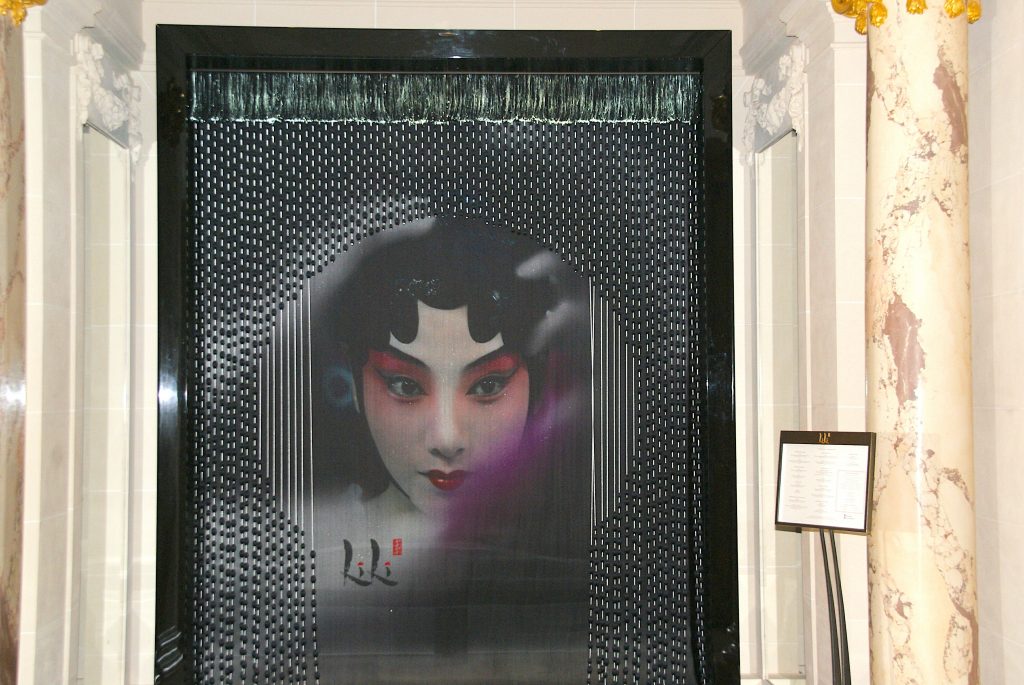 The Entrance curtain of Le Lili

This Paris legend brings in large crowds. Go early, late, or be prepared to wait a bit for a table. Bouillon Chartier, located at 7 Rue du Faubourg Montmartre, is popular with locals as well as tourists, and fills quickly, especially on weekends and holidays.

This quintessential Paris eatery offers good food, reasonable prices, and a true French experience.  Founded in 1896 and designated a monument historique in 1989. This budget brasserie has served 50 million meals through the years – they must be doing something right. 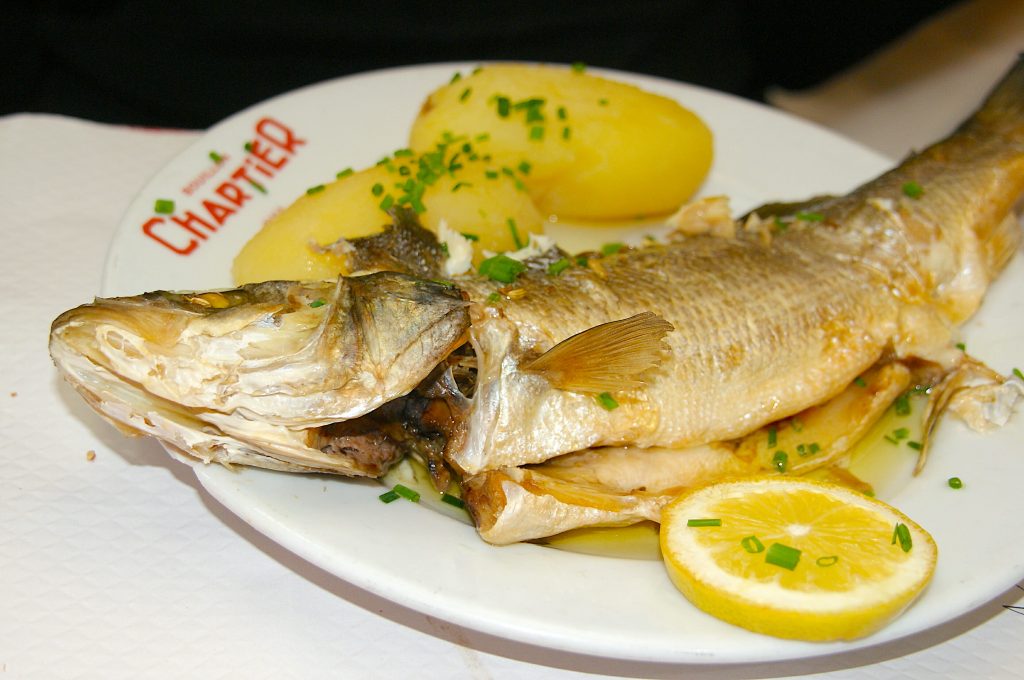 There is only one Paris. Whether it’s your first trip, or you’re a frequent visitor, Paris will always be a premier destination. 3 days in Paris is not nearly enough, but it will give you a taste for a city you are most like going to return over and over again. The history, the architecture, the food, the wine, the museums, the people will forever leave visitors with smiles on their faces and fond memories in their hearts. 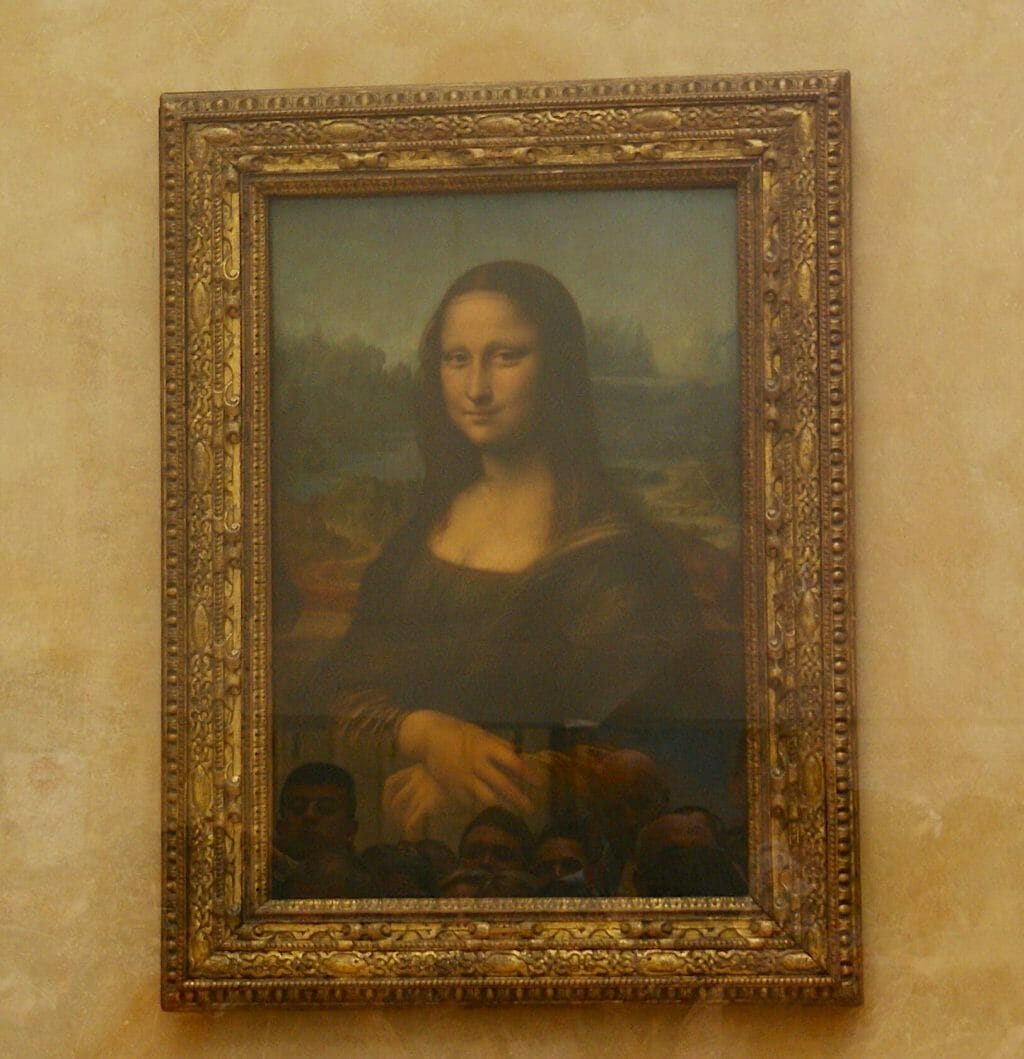 The Mona Lisa in Le Louvre

3 Days in Paris Itinerary was written and photographed by Scott Kendall.

Disclosure: The author was hosted by Lili in The Peninsula Hotel and received complimentary Paris Passes for free admission to many of the top attractions in Paris.

3 Days in Paris Itinerary for First-timers – Pin For Later: 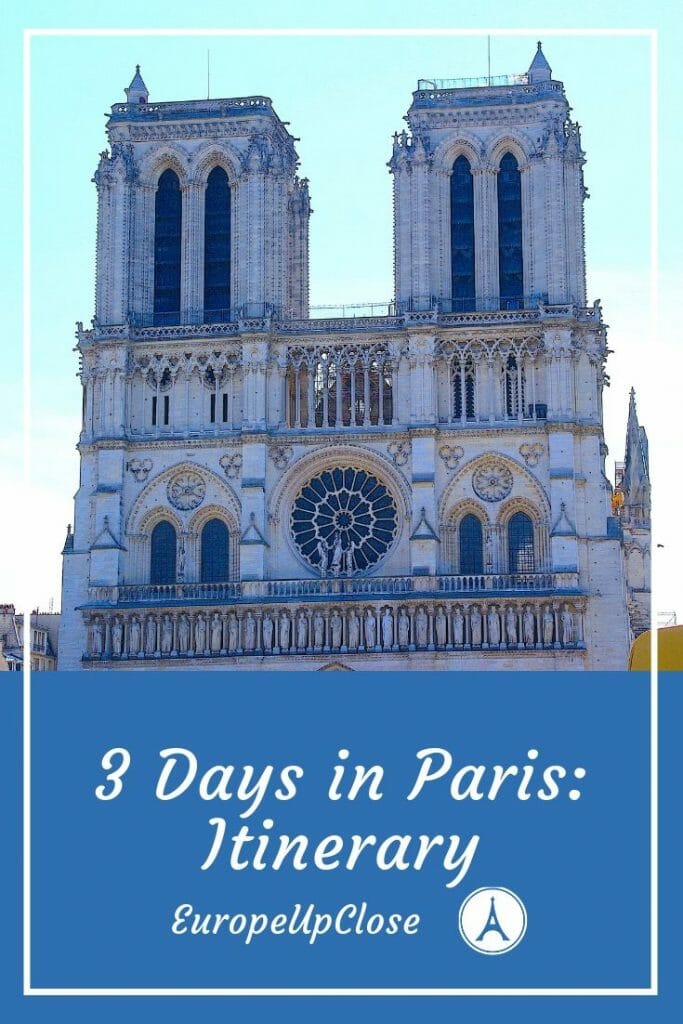 This is a very useful article for the travel freaks like me... thanks for sharing this... the photos are just....awesome..!!

A very informative post, I always love to make Paris trip, Paris is full of world bet travel attractions which attract millions of visitor every year. I always love your blog, Thanks for sharing