From the outside, the Hagia Sophia in Istanbul, Turkey looks like an impenetrable fortress. Thick, red-stained stucco walls stair step up in collections of annexes to a massive grey dome. Deep set windows dotting the surface are blackened by the shadows inside. Four flat pillars protruding over the narthex and apse resemble stoic guards keeping vigilant watch over the great 6th century Eastern Orthodox basilica. But what treasures do they protect? What ancient secrets are hidden inside? …Perhaps Heaven itself. 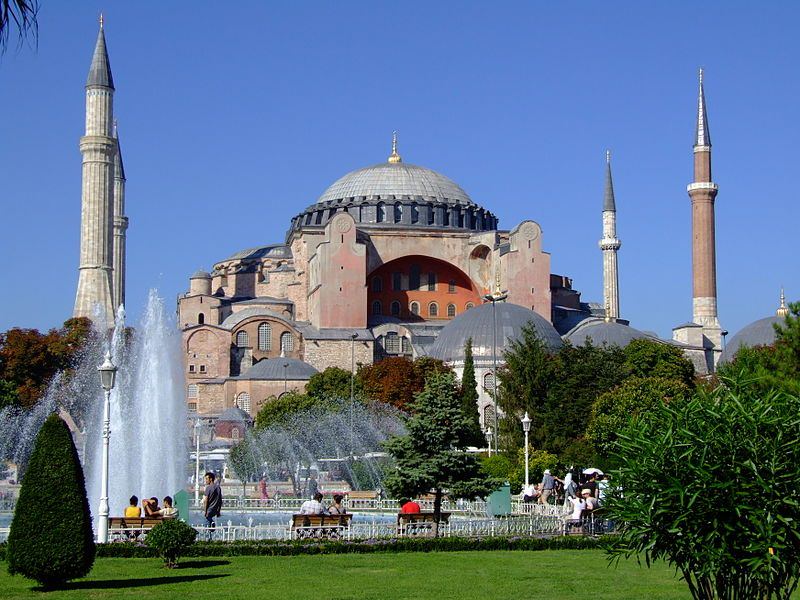 Hagia Sophia from the Outside

When the ambitious Byzantine builder, Justinian I, commissioned Hagia Sophia in 532AD he asked his architects to design a cathedral to rival Heaven. The Emperor wanted grandeur. He wanted a building that would instantly transfer worshippers into a state of ecstasy and entice a transcendental connection between them and their God. Justinian’s architects, physicist Isidore of Miletus and mathematician Anthemius of Tralles, accomplished this supernatural feat by perfecting two architectural elements first realized during the Roman Architectural Revolution and opening up a space so large it went unrivaled for a thousand years.

As I pass through the basilica’s Imperial Gate and into the central nave I am instantly overwhelmed and intimidated. Encapsulating nearly one million cubic feet, the vast amount of empty interior space simulates a vacuum. Light from low hanging chandeliers struggle to penetrate the 240 x 269 ft. hall and muffled voices of tourists fade before reaching their intended targets. People are insulated and isolated in such an immense void and that disconnect causes me to feel small and insecure. 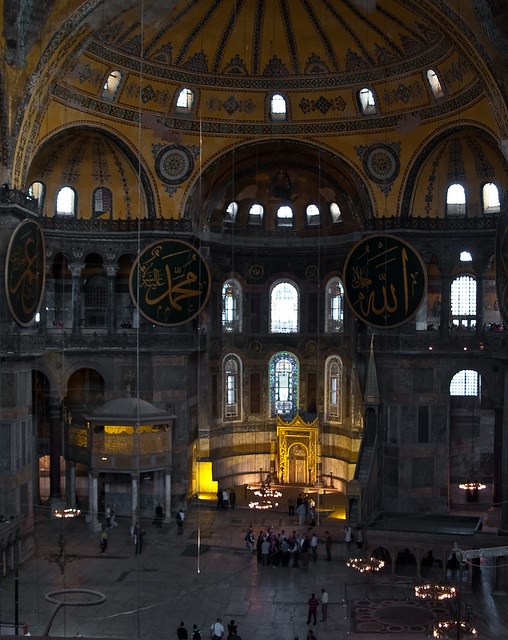 On either side of me rows of Hellenistic columns form a broken barrier, faming the main space and obscuring the walls beyond in shadow. Off in the distance at the opposite end of the nave the concave apse is bathed in a soft yellow light. Even it, the most sacred place inside Hagia Sophia, seems minuscule in such an enormous building. The light reflects off the gold tiles of the mosaic decorating its half-dome, and beckons me forward into the heart of the basilica.

As I walk, my gaze shifts to the four pendentives positioned in the upper corners of the main structure. Faded murals of six-winged cherubs stare out from their curved surfaces. One angel, only recently uncovered after centuries hidden under a layer of plaster, watches me with a mysterious smile.

First developed in the 2nd and 3rd centuries, pendentives replaced the less reliable corbel and squinch supports used in dome construction. However, it wasn’t until the building of Hagia Sophia’s compound dome that the full potential of their application was finally realized. Placed just under the dome’s drum, the pendentives’ inverted triangular form implements the transition from its circular base to the rectangular body of the nave. With clean lines and aesthetically appealing forms, the weight of the massive dome is gathered in the upper horizontal lines of the pendentives, passing through to the lower points of the triangle, and transferred down into the supporting walls and foundation below. 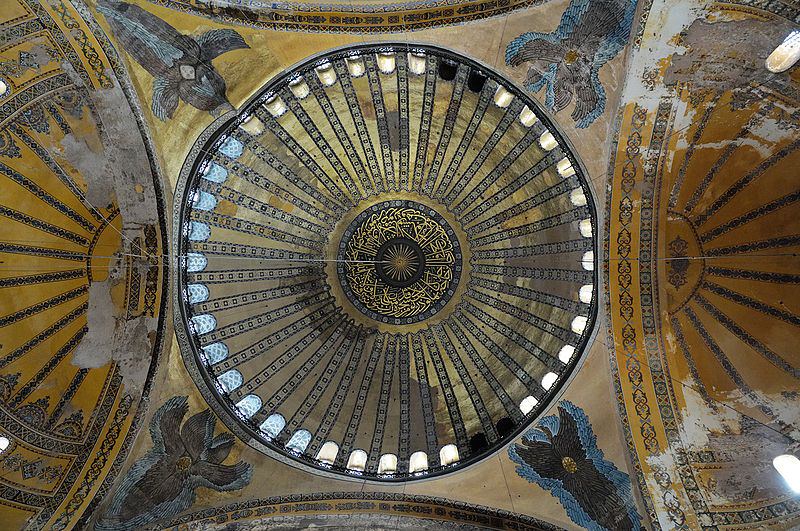 Above the pendentives, 102 ft. over my head, sits the massive dome for which Hagia Sophia is famous. Forty ribs cascade from its peak down to a gallery of arched windows encircling its base. Just as the pendentives collect and redistribute the weight of the dome, the ribs provide the same service to its surface, relieving the stress between each rib and opening the space up for something as fragile as glass to be inserted into each panel. Along its northern curve I count eight ribs, while on the southern side I find only six. Revolutionary at the time of its construction, the dome has evolved to be slightly elliptical due to several repairs following earthquakes which caused partial collapses.

Sunlight pouring through the windows obscures their frames, creating a continuous ribbon of radiance around its base that causes the dome to appear to be detaching itself from the main structure and hovering above the rest of the building. A shaft of light from outside breaks through the easternmost windows but dissipates before finding a place to land inside the dome’s empty interior. It’s a reminder to me that a bigger Universe exists outside these walls. 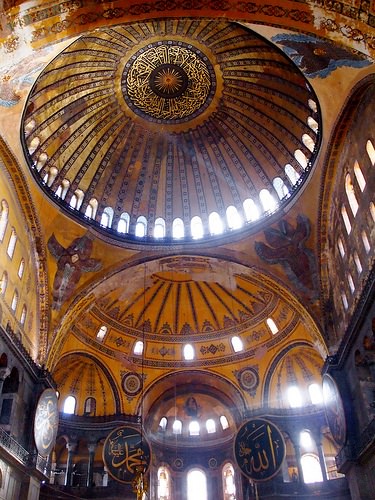 Heavenly Light in the Hagia Sofia

Justinian’s vision to recreate Heaven on Earth was realized through space and form in Hagia Sophia. With a revolutionary design, the architects’ perfected Roman technology, elevating it to a level never before seen and changing the course of Western architecture for the next thousand years. But the mastery of the technology utilized in its building is less impressive than the magical experience it evokes. In the tenth century a group of Russian envoys, after having recently visited Hagia Sophia, reported to Tsar Vladimir I, “We no longer knew whether we were in heaven or on earth…and we know not how to tell of it.”

Hagia Sophia became a museum in 1943 under the new Republic and is now open for visitors every day from 9:30am to 4:30pm, except Mondays. Services are prohibited.

Dena Weigel Bell holds a Bachelors of Fine Arts and has participated in several study abroad programs, exploring the cultural history of over thirty countries in Europe, the Middle East, and Asia. She continues to travel for pleasure, learning many new things on each adventure and writing about them at www.denaweigelbell.wordpress.com.

Hagia Sophia in Istanbul is a must-see place for every tourist, it is simply fantastic!

Turkey is so much fun. If you are ever really looking for true adventures, there is no place better than Turkey. People are still doing lots of archeology digs and diving sunken ships looking for underwater treasure. And they are still finding great stuff all the time.

I was here when I was but 13 years old, let's just say many years ago. Your post reminded me of that trip though at the age of a young teen I didn't have the capacity to appreciate the architecture and the olden and the sheer splendor of the detail that went into the building of these places in Turkey. Seeing them here and I really would love to go back and take my own daughter who is now 14 years old. Great website will definitely bookmark--  Regards, Mike

Truly an amazing structure.  How a structure can be both grande and artistically beautiful is quite an amazing accomplishment.  I didn't even know it existed prior to reading this article and now I'm putting it in my "bucket list" of places I want to visit.