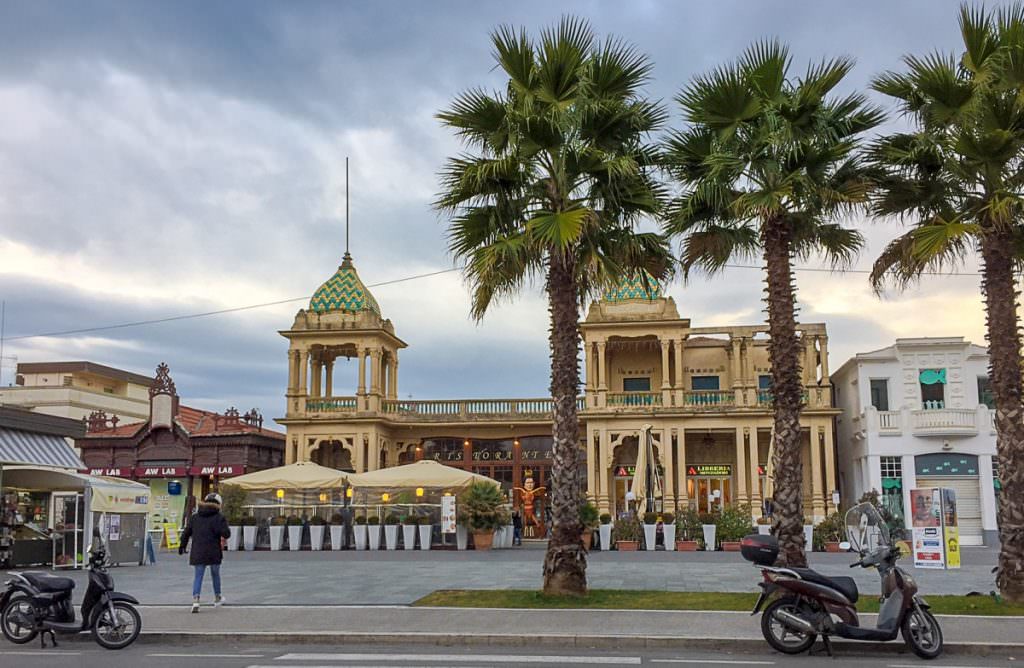 Viareggio, Italy, is known as the “pearl of the Tyrrhenian Sea”, with good reason.   In the summertime, it is a chic and sought-after seaside resort, with stylish hotels, fine dining, and an upmarket clientele.   Its fine sandy beaches stretch for six miles up and down the Mediterranean coast:  one-third are public with open entry, and the rest are managed by 100 private operators, often affiliated with local hotels, as Italians prefer.

The atmosphere is not mass-market raucous like Rimini on the Adriatic, nor as shake-your-jewelry exclusive as Portofino further up the coast; it appeals to upper-middle-class vacationers.   It is family-friendly, as its sandy coastline slopes into the sea
a gently, unlike many other maritime destinations in western Italy.

Two pinete (pine forests) on the north and south sides of town – Pineta di Ponente and Pineta di Levante — are unusual for a seaside resort and offer a cooling respite from summer heat.   Unique also is its graceful Liberty (aka art deco) architecture, one of three Tuscan towns where this style of architecture is extensive (the other two are Florence and Montecatini Terme).  A visitor can arrange for a walking tour with a local art historian to view major Liberty buildings and learn about their significance.

Better-heeled visitors can stay in the five-star Grand Hotel Principe di Piemonte and surround themselves with Liberty style while they sleep.

More unusual still:  unlike many Mediterranean resorts, Viareggio does not lose its shine and turn into a ghost town when the summer season ends.  The local economy does not depend entirely on summer tourism, nor on the location’s renowned Carnevale for that matter.  Two of the top luxury yacht makers in the world call Viareggio home – Benetti and Perini.  They and other superyacht builders like Viareggio Superyachts are the focus of a cluster of marine-related industries, making a walk around the town’s port an exercise in aspiration.  The restaurants, cafes, and boutiques catering to the billionaire yacht clients who visit here add to the attraction. Floriculture is also a significant activity, as is the fishing industry. 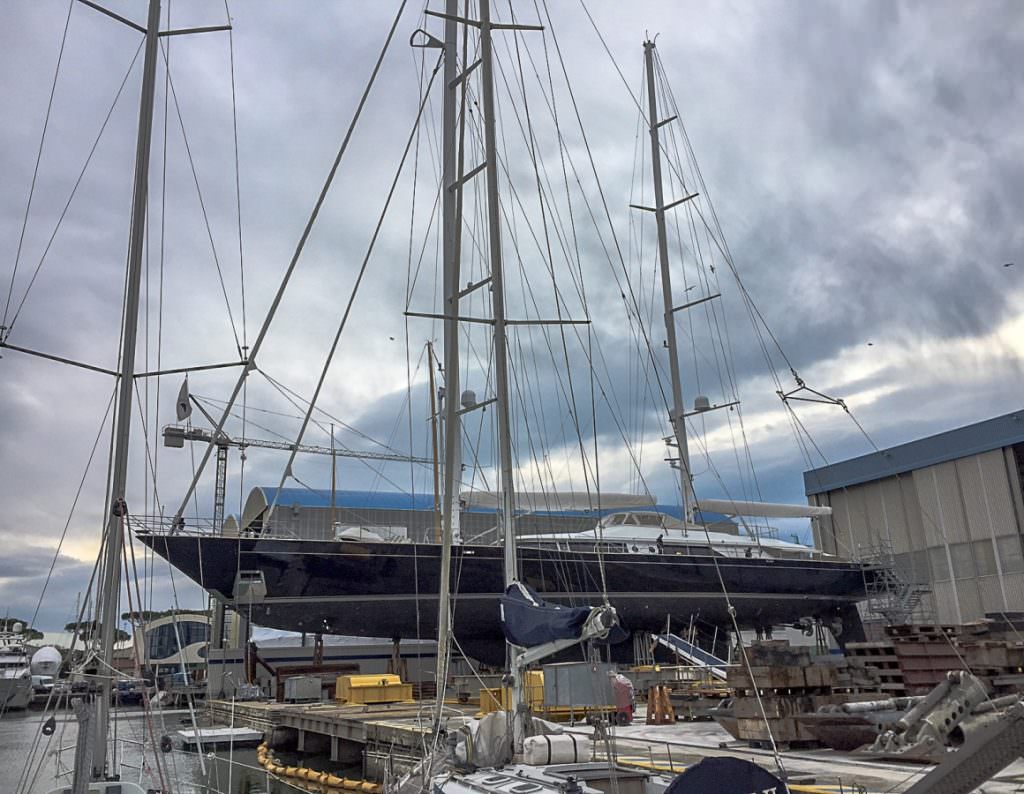 In short, Viareggio is a real little city of 60,000 with a full range of shops and boutiques, a train station with direct connections to Milan and Rome (i.e., you don’t have to change trains in Florence, Bologna, Genoa, or other hub cities), and three Michelin-starred restaurants (two one-star restaurants and one two-star establishment) within walking distance of each other.

The Passeggiata al Mare (sea walk) is a road that runs parallel to the sea for almost two miles. It is broad and open;  the city’s famed Carnevale floats pass along this route.  It is studded with bars, shops, and hotels in Liberty style.

The Viale dei Tigli (road of limes) is a scenic road running through town; it connects the two pine forests and more.  Tucked in between is a daily street market sprawling over several blocks and offering a refined version of typical market products, including food, housewares, clothing, and more.  It is not open only in summer months. Among the specialties found here are lardo di Colonnata (arguably the world’s most famous pig fat, produced in a nearby town), pane toscano (the renowned Tuscan bread made without salt), olio della Luccesia (local olive oil from Lucca, awaiting IGP recognition), and paper-mâché masks (testimony to the town’s prowess in this folk art, and a perfect souvenir of its Carnevale).

Art and Culture in Viareggio

The focused and richly informative GAMC (Galleria di Arte Moderna e Contemporanea Lorenzo Viani), a member of Piccoli Grandi Musei, is housed in a stunning Liberty building in the center of town, the Palazzo delle Muse. Viareggio has its share of painters, artists, and artisans, so the idea for a museum to recognize them had probably been germinating since the late 1800s, but it took concrete form in 1925 when the local government bought a masterwork by Lorenzo Viani, a local painter who had achieved international recognition.

IN 1979 the city acquired 50 works by Viani.  A private donation added 45 more Vianis in 1993, at which point the local government created a pinoteca (picture gallery) to house this growing collection.   The museum later expanded its focus when Giovanni Pierracini, a native of Viareggio, donated his rich collection of contemporary art to GAMC.

Today GAMC boasts more than 3,000 works of art by 750 artists, Italian and international, from the early 20th century; about 300 works are on display at any given time. With advance notice, an English-speaking guide can show you around; cost depends on the number of people and the length of the visit.   With planning, visitors can also attend free lectures, screenings, and special events mounted by GAMC.

A short walking distance from GAMC brings you to Centro Matteucci per l’Arte Moderna (Matteucci Center for Modern Art).  Housed in a beautiful Liberty building dating to 1915, CEMANO (site not in English – use Google translate) is part museum, part exhibition hall, and part cultural center, focusing on Italian art of the 19th and 20th centuries.   As with GAMC, guides can give you a tour and interesting insight on the various exhibits.

Nature and Outdoors in and around Viareggio

Some travelers would rather explore woodlands than museums. Others favor lake fauna over seaside fashionisti.  Viareggio can satisfy such requests, given its proximity to the Parco Naturale Migliarino – San Rossore – Massaciuccoli (site not in English – use Google translate), just 1.5 miles from town.  The park offers options for canoeing and kayaking on Lake Massaciuccoli, as well as hiking, horseback riding, and golfing.    Birders were particularly welcome, as LIPU, the Lega Italiana Protezione Uccelli, or Italian League for the Protection of Birds) organizes guided visits on foot and by boat to observe the local plumed fauna, including the very rare tarabuso (starred heron).

In short, Viareggio is a pearl for all tastes . . . and all seasons.

Viareggio, Italy: A Summer Pearl that Gleams Year-Round – Written and photographed by Claudia Flisi for EuropeUpClose.com.