It is July and you are staying in Florence for a week. You rush from museum to cool museum to escape the suffocating heat. The open piazzas are the worst. By 2pm you give up and retreat to your air-conditioned hotel room, where you settle in with a book and occasionally look out the window at the bright blue sky, wondering why this is a vacation.

You could spend the dog days of summer like this during your trip to Florence, but there is another, much more refreshing option: Take a trip to the Mediterranean! Many people don’t know that the sea is so close to Florence. Viareggio is a popular seaside town along the Tuscan Riviera (Versilia) and is easily accessible by train from Santa Maria Novella station. What’s better is that Viareggio offers plenty to do besides take a swim in the blue sea—there are literary secrets to discover, forests to stroll in, and excellent meals to be had.

From Florence to Viareggio the trip is about an hour and a half and costs as low as 13€ round trip. Trains run regularly throughout the day, but more often in the mornings and evenings. You’d want to leave early to get the most out of your day. 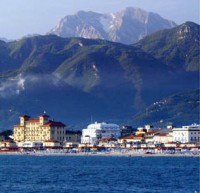 The beach is only about a five-minute walk from the train station in Viareggio. If you want to get your bearings, a large sign with a map is just outside the station. But all you need to do is pick any street across from the station and walk straight. You’ll soon hit the famous promenade dotted with palm trees, where you’ll find no shortage of cafes and restaurants, shops and bookstores.

If you’ve never been to the sea in Italy before, then there is something you should know: it is typical to pay to use the beach. With the price of admission, you are granted use of an umbrella and a lounge chair. There are public beaches, free for anyone to use, but it is commonly known that these beaches are a bit dirtier and very crowded.

Upon arriving at the main promenade—viale Regina Margherita—you’ll catch glimpses of the sea in between the shops. You’re likely to see mostly private beaches, with their colored umbrellas and signs for Nettuno (Neptune, for the god of the sea) and Bagno (sea bathing). If you take a left on the promenade, towards the harbor, you’ll eventually come to an open path to the sea on your right. This spot is the free beach (spiaggia libera). Step onto it at least to exult in the clear view of the mountains to the northeast—there you will see the cascades of white stone in the mountains in Carrara, famous for its marble. You will probably notice, however, that the beach is packed and it is fairly dirty. This is not a horrible beach, but if you’re feeling more adventurous, there is thankfully another option.

The Good Public Beach
(Disclosure: this is a good 20-minute walk from the main beach area north of the
harbor—but worth it!) 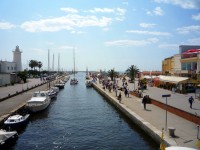 At the end of the promenade you’ll come to the harbor. A high white pedestrian bridge takes you over the sparkling Burlamacca Canal. On the other side of the bridge, stay on the road close to the canal and walk east (away from the sea). You’ll be passing by marina buildings that are designed in a lovely art deco style. Walk straight until the road curves to the right. The road ends at via Michele Coppino. Take a right on this road and then take your second left on via del Pescatori. Walk straight and at the end of via Pescatori you’ll see a campground and the entrance to a pine forest. There you will find a charming path surrounded by cool evergreens that takes you out to viale Europa. You’ll see a curve in the road up ahead. Keep walking and just when you get to the curve, you’ll see a dirt path across the street. You should see a sign telling you that you must not play games on the beach—now you know you’ve found the right place! Once you get past the small dunes on the left, the sea opens up before you. This is the good public beach. It is small but it is also less crowded and cleaner than the one in the main section of town. 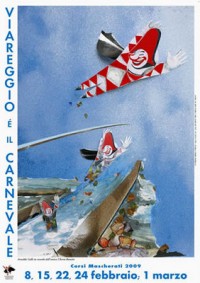 Besides its popularity as a seaside resort town, Viareggio is famous for its Carnevale. Since 1873, artisans have been creating colorful papier-mâche masks and spellbinding floats and parading them through the town every year. The Burlamacca Canal gets its name from the town’s “mascot”—a famous Carnevale figure whose statue adorns the main promenade. The spectacular Viareggio Carnevale is well-known not just in Italy, but throughout Europe, so if you’re here anytime between January and March, you must witness this dramatic event.

The village’s history dates back to the 16th century and has long been known for its shipbuilding as well as its fishing and floriculture industries. The large industrial buildings and marinas on the walk toward the “secret” public beach attest to this tradition. 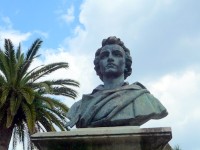 The town also boasts a literary tale, albeit a somber one: the body of Percy Bysshe Shelley, the Romantic poet, washed up here in July 1822. He had drowned at sea during a stormy journey to Lerici, a town to the north. His body was cremated on the shore, with Lord Byron among its witnesses. You can see a memorial to Shelley in Piazza Shelley, just behind the promenade.

After spending all day in the sea and sun, your hunger is going to strike. If you are at the beach south of the harbor, you won’t have to walk far to try some of the best seafood in Viareggio at Trattoria La Darsena (via Virgilio, 150). This restaurant gets high ratings for offering excellent food at reasonable prices. If you want to have lunch on the main promenade of Viareggio, I strongly recommend the Gran Caffé Margherita, whose lovely Liberty-style mosaic tiled towers you can’t miss. You can sit outside and enjoy a pizza, be taken care of by the very pleasant and relaxed staff, and watch the world walk by. Also, make sure to take a coffee here after lunch—it is exceptionally good!