Drive the 17 km of winding roads from Palma and you will reach one of the most famous villages in Mallorca – Valldemossa. At 437 meters above sea level and with a beautiful setting in a valley surrounded by mountains – the village looks like it is taken from a fairytale. Painters come here for the wonderful light, writers and musicians for the inspiration. 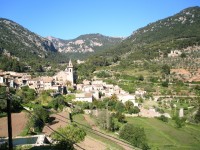 The famous pair Frédéric Chopin and George Sand, spent a few winter months in Valldemossa in 1838-39. Chopin composed several of his works in Valldemossa and George Sand wrote a book about her experiences during their time on the island, in the classic “A Winter in Mallorca”. She actually wrote about how she hated the island and its people, food and landscape. However, you should not let that influence you. Mallorca is a true paradise and Valldemossa one of its most beautiful villages – with its scenic setting, cobbled streets and charming atmosphere.

What to See & Do in Valldemossa

Chopin’s and Sand’s residence was a former monastery, La Cartoixa, which was inhabited by monks beginning in 1399. It is now a museum, as is the palace next to it – Palacio del Rey Sancho, built in 1311. The palace is full of antiques and art pieces, and has a beautiful courtyard. There is also a small concert hall where the famous Chopin Festival is held each year, in July and August.

According to ancient legend, Santa Catalina Thomas was born here in 1531. She was a peasant’s daughter who later became a nun and spent most of her 43 years in a convent in Palma. In 1627 she was declared a saint. Most houses in Valldemossa have a picture of her hanging at their entrance. The house she was born in still exists – at Carrer Rectiria 5.

Music lovers should check the program for the cultural centre, Costa Nord. Founded by the American actor Michael Douglas, it has become a popular venue for all kinds of concerts in June-August each year. Famous musicians like Van Morrison and Compay Segundo have performed at the cultural centre.

Drive the six km narrow and winding road down to the sea and the tranquil harbor, Port de Valldemossa. However, if you are someone who easily gets car sick, you might want to think twice. And, beware of heavy traffic during the high season. When you’ve finally reached the harbor, drive past the area of the estate of Michael Douglas and the authentic, tiny fishing village, Caló d’Estaca, where time seems to have been standing still for the last century. Have a dip into the clear water or just stroll around, enjoying the ambiance.

Where to Eat in Valldemossa

Oranges, lots of oranges, hang outside the Bar Meriendas – the most popular café in town. The many locals coming here for coffee or to sample some tapas is an indication of its fine reputation.

Restaurant Es Port, located directly on the seafront in Port de Valldemossa, is a must if you like tasteful, fresh fish and seafood. It offers very friendly staff, a genuine atmosphere and a magnificent sea view!

For an extraordinary culinary experience, visit the restaurant in the Hotel Valldemossa. It features excellent cuisine with courses like “lightly smoked sea bass with truffled potatoes, spinach, aioli chips and crunchy pine nuts” or the grilled “fish of the day with vegetables of the season”. It will cost you, but it is so delicious!


Where to Stay in Valldemossa

You might try the old refurbished Mallorcan farm house, Hotel Vistamar. It is surrounded by a beautiful rural landscape with olive, almond and pine trees and is located about 2 km from Valldemossa. They have ten rooms with modern facilities and many of them have their own terrace.

Hotel Valldemossa, a member of the distinguished Relais & Chateaux chain, is a first-class hotel situated on a hill overlooking the mountains, the monastery and the bay of Palma. It proudly features beautiful gardens,  outdoor pools, jacuzzi, sauna and a pool bar.

higher range, Mirabo de Valldemossa is a luxurious, fully renovated finca from the 19th century. It has a tastefully decorated courtyard patio and two large pools; one of them heated for a refreshing winter swim. The hotel has eight spacious rooms, many of them with original stone walls and their own terrace. This beautiful hotel with its spectacular views provides the perfect setting for a romantic weekend.

For a low-budget alternative, stay at the Es Petit Hotel de Valldemossa . This small hotel in the middle of Valldemossa has eight comfortable rooms, all with common facilities; a dining room with a terrace, a bar with a fireplace and stunning views of the valley.