You can’t travel in Greece without feeling awed by the history that surrounds you. Especially on the Peloponnesian peninsula, where the Olympics games began and the Mycenean culture thrived. On our way to see these ancient sites, John and I encountered quaint mountain villages, vineyards, tucked-away beaches, and friendly people who were happy to raise a glass of retsina with us. 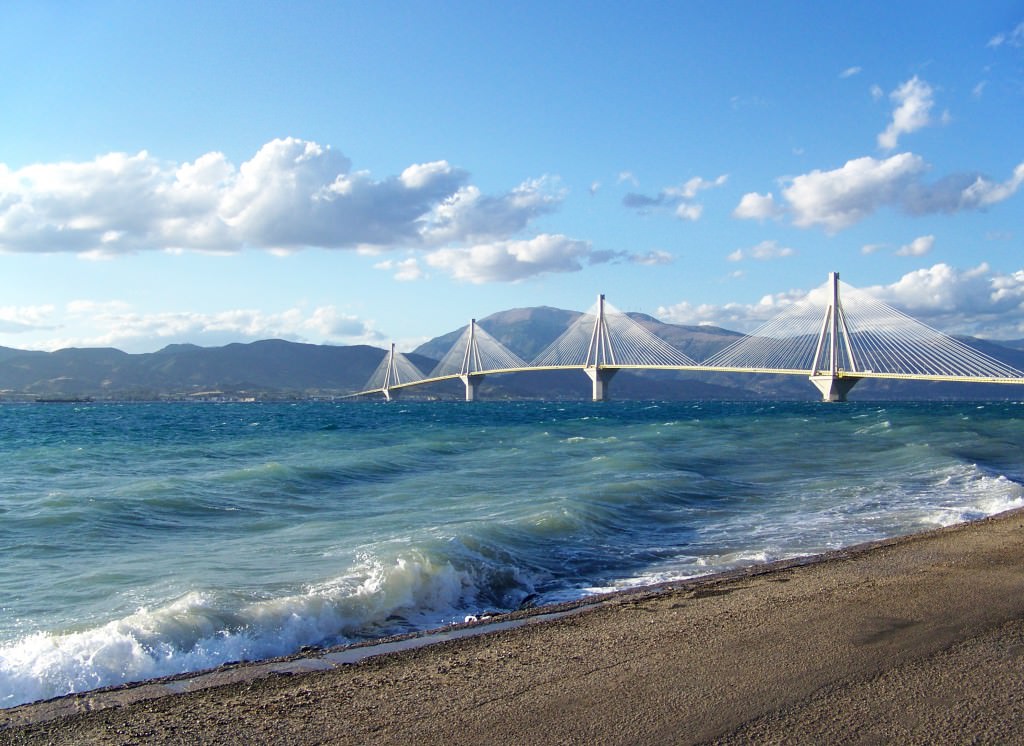 We started at the top, crossing the ultra-modern Rio-Antirrio toll bridge, and drove south through swirling dust, blown in from Africa, to Olympia. The thick dust abated when rain fell, and under umbrellas we went to the vast complex where the Olympic Games began, in 776 BCE. Trees with purple blossoms grew among the ruins of fountains, baths, temples and shrines.

Independent as usual, we had no guide but we’d done our homework and knew that the early games were religious rites, dedicated to Zeus. The god’s gold and ivory statue in the temple was one of the 7 wonders of the world, and his temple stood for 1100 years, until an earthquake destroyed it. Nearby is the stadium, and as we walked under the stone archway, as those long-ago athletes did, we could almost hear the roar of the crowds. An excellent museum holds artifacts from the site. 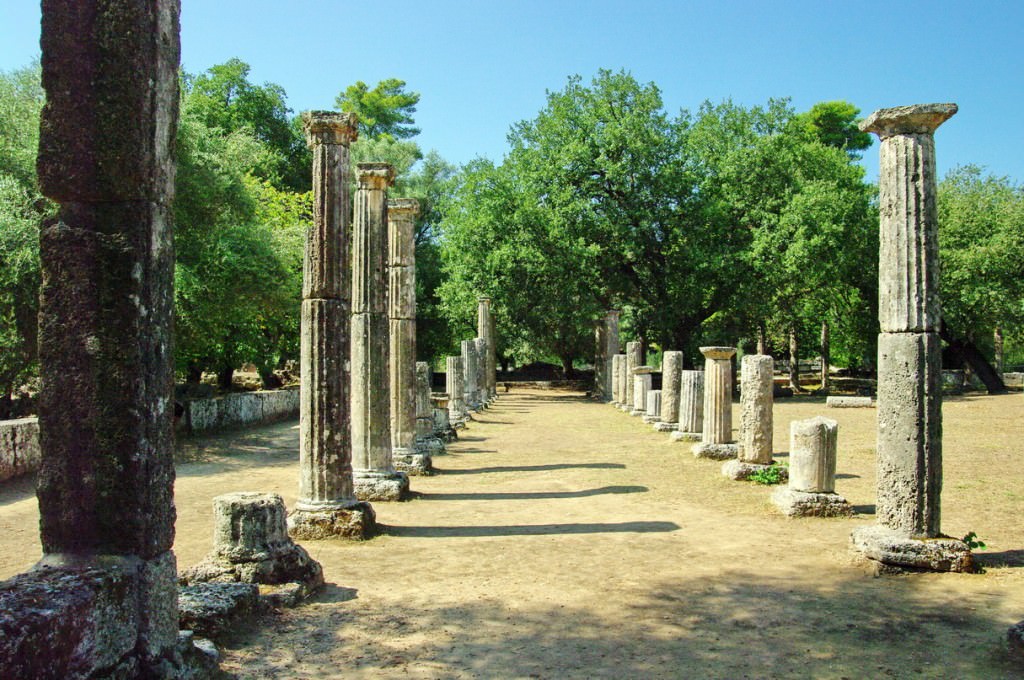 The Palaestraof Olympia, a place devoted to the training of wrestlers and other athletes

Our sleek and comfortable hotel, Best Western Europa, was set on a hill outside the town of Olympia, a few minutes drive from the archeological site. It has an inviting pool, rose garden, and good restaurant.

Headed south on winding mountain roads, we were battered by rain and hail. At the top of a ridge, in thick fog, we came upon a spooky sight: the Temple of Apollo, shrouded in flapping white tarp to protect it from freezes. We took only a quick peek before driving down to wide plains of olives and grapevines. 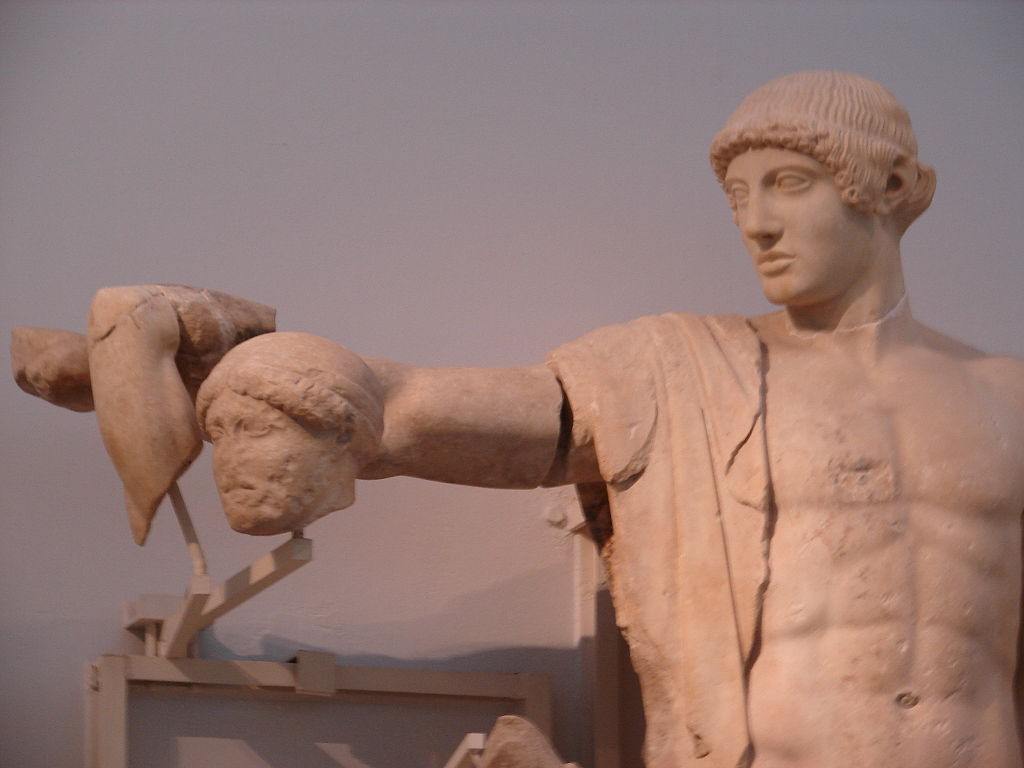 Zeus from the Temple of Apollo

In Pylos, a small town on Navarino Bay, we were the only guests at the inexpensive Miramar Hotel (45 euros, including breakfast). Hungry, we stumbled upon a good spot, the Alfedi where, for a few euros, we feasted on eggplant ragout and pork souvlaki, salad, lamb steak, and crispy French fries. Pylos is a good base for a few days; you can watch the boats in the harbor, check out nearby beaches, and visit a castle and church.

We went on to explore the Mani, a finger of mountainous land extending south. {Traveling here deserves a story of its own, to come later.)

After a few days on the Mani, John and I drove to Mystras, the ruins of a 13th-century Byzantine city, sprawled high above the Spartan plains. Mystras had a bloody history, but it was also famed for glorious art and silk weaving, and was a major power center.

Our last days on the Peloponnese were in lovely Nafplion, on the Gulf of Argos. In the very pleasant Hotel Agamemnon we had a large room overlooking the harbor. The town’s tree-shaded plazas, harbor side cafes, narrow streets, and Venetian and Turkish architecture make Nafplion a favorite vacation spot for Athenians. It has a fine archeological museum, old fortresses, and a folklore museum showing traditional clothing and handicrafts. In the churches, old ladies in black sit, waiting for tourists to sneak a photo of the silver-clad portraits of saints. If you lift a camera, they shake their fingers and say no. 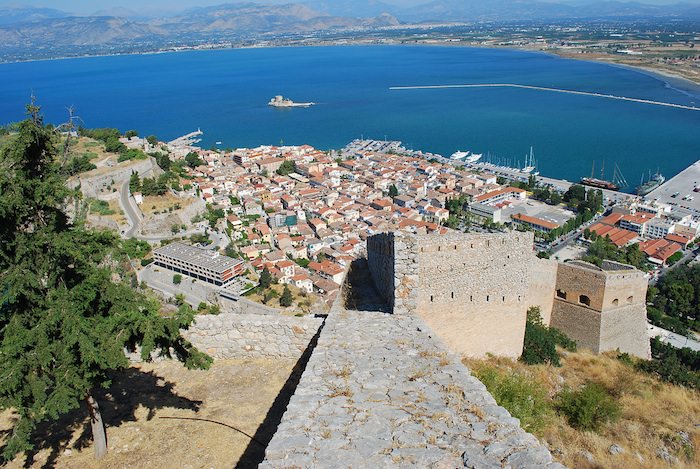 Epidauros, the best-preserved Greek theater, is 15 miles east of Nafplion. It’s noted for perfect acoustics, and visitors always test them, standing center stage and whispering, “Can you hear me?” “Yes,” their friends yell from far away in the high back row. We did the same.

Before this visit I had not known that Epidauros is part of a huge compound, the Sanctuary of Asklepios. In 4th century B.C.E., the sick came for medical help, including surgery, and to dream. In specially designated rooms, while the patients slept, Asklepios, the god of healing, sent them cures in their dreams. The sanctuary thrived for centuries. In the museum, among other artifacts, we saw a stone carving of human ears, commissioned by a king when he was cured of his deafness.

Mycenae, on the main Nafplion-Athens road, is the most important historical site on the Peloponnese. Built in 1500 B.C.E., the great and powerful city was the home of the tragic House of Atreus. Murder, hatred, greed, cruelty — you might call the Atreus family dysfunctional in the extreme. It took imagination to picture the palace and buildings that once stood on those stones. But the evidence was there. We could see the grooves made by chariots, the carved lions above the entrance, and the circular royal tombs where a fabulous treasure of gold masks, jewelry, and crowns was found. 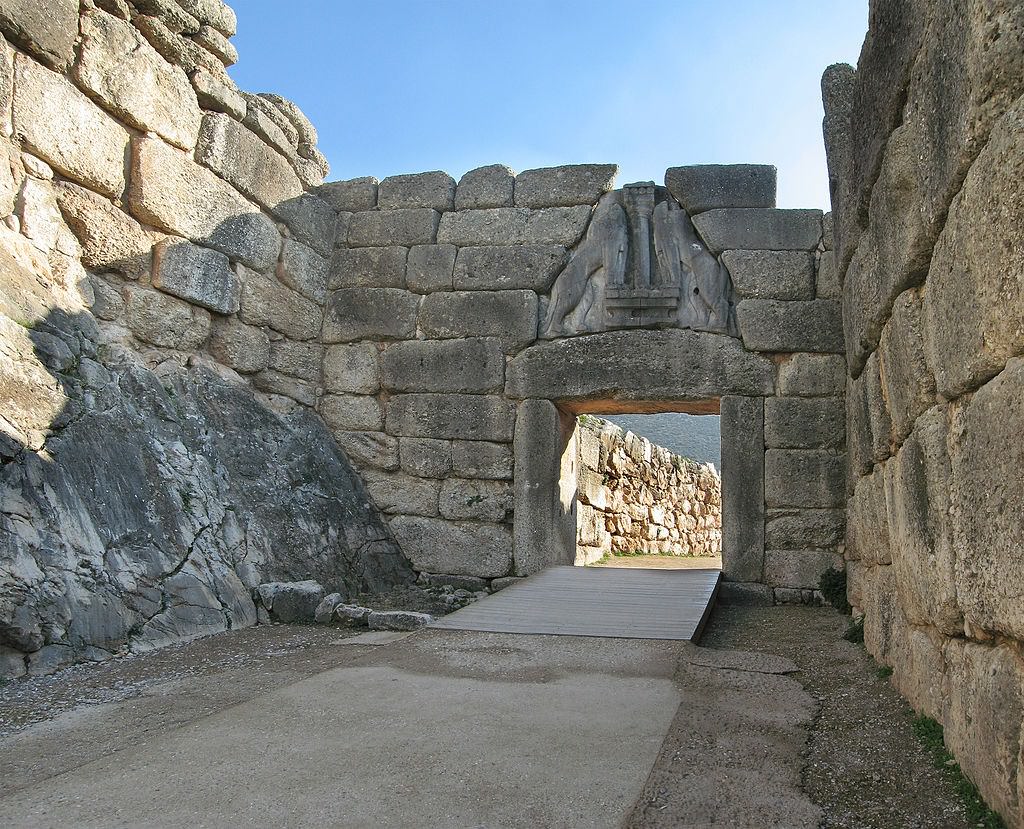 The Lion’s Gate at Mycenae

We arrived early at the site, and by the time we left at 10:30 a.m., ready for the OJ stand, tour buses were rolling in. I counted 20, with more behind them.

Back in Nafplion, before checking out of the hotel, we had lunch at Visilis Taverna, on a restaurant-lined cobblestone street. The dolmathes in lemon sauce were good, the grilled fish better. We learned to expect that most dishes, except for the best-in-the-world Greek salad, would come swimming — drowning — in pools of olive oil.