Only a few nautical miles separate them, but the islands of Tinos, Mykonos and Delos in the Greek Cyclades group are as diverse as the Elysian Fields and the Underworld: The Divine and the Decadent. 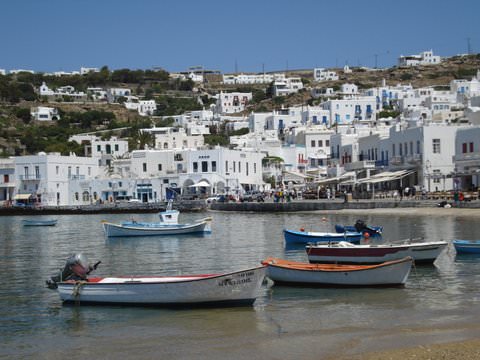 Tinos is ascetic: a holy island, famed for one of the most important shrines of the Orthodox Church. Mikonos is primarily an island noted as a pleasure-seeker’s delight. Delos has been the god Apollo’s sanctuary since antiquity. 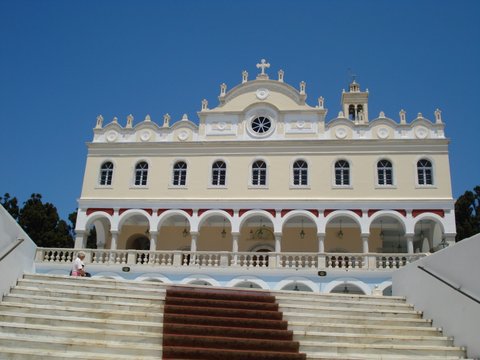 Tinos was declared sacred by the Orthodox Church in 1971 because of a mystical icon. Delos, birthplace of Apollo, has been a sacred island since 426 BC. Worldly Mykonos stands as a stepping-stone between the two.

As you approach Tinos, the bell tower of the Church of  the Panagia Evangelistra looms above the flat rooftops of the quiet town. The Church is always a dominant feature on Tinos. Every August 15 for a hundred years  it has been the scene of a mass pilgrimage symbolizing faith in the Holy Mother.

There are several monasteries and convents on the island, the most significant being the Convent of Kerovouinio. It was here in 1823 that a nun received a vision revealing the hiding place of a miraculous icon. Its discovery was taken to be an omen announcing the freedom of the Greeks from Turkish bondage. The icon is housed in the Church of the Annunciation. 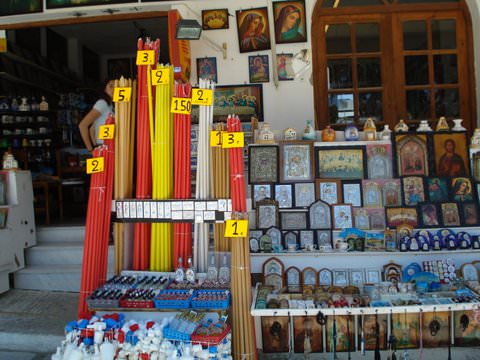 Climb the long avenue from the port. Along the route there are shops and stalls selling religious trinkets. Vendors peddle candles, incense, votive offerings for the shrine.  In August, when the annual pilgrimage is held, and even on this day when I visited, people crawl on their hands and knees up the curb-side carpet to the church where they will pray and kiss the holy icon, hoping for cures for their ills.

At the top of the hill, white seminary buildings surround the church like a fortress wall. The big iron gates, plated with silver figures of the Virgin and saints, open onto a wide courtyard paved with mosaics of black and white pebbles. Go up the red-carpeted stairs to the main entrance of the church. The fragrances of candlewax and incense drift out of the open doorways. 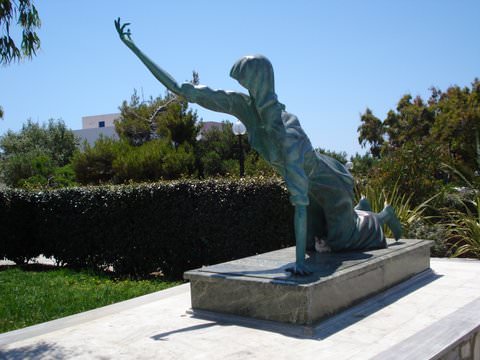 Statue of Supplicant on Tinos

The church sanctuary is bright with filtered sunlight and the soft glow of candles. Massive white columns joined with chains are hung with thousands of silver votives: lamps, ships, animals, birds, fruit, flowers— all donations from believers.

To the left of the entrance, surrounded by flowers, is the shrine of the Virgin. It’s a tall, white-pillared altar carved with cherubs and acanthus flowers. Protected inside a glass cover, in a frame embellished with engravings of silver and gold-leaf, is the famed icon. The dark, egg-tempera faces of the Virgin and Child are almost obscured by a spangled wreath of pearls, diamonds, emeralds and rubies. The icon is believed ot have miraculous healing powers. Pious worshippers approach in awe. There is a mystical atmosphere in the Church. 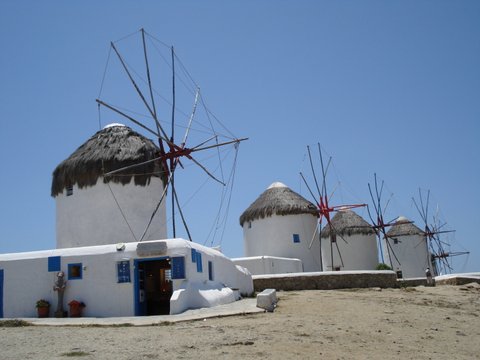 The ferry trip from Tinos to Mykonos is only an hour, but as I approach Mykonos harbour, I know I am entering a different world. In sharp contrast to the green, mountainous Tinos, Mykonos is rocky and barren.The village is stark, vivid, a flaring whiteness against the ink-blue sea. Sparkling white cubes of houses and the little blue and red domes of miniature churches are strung out along the jagged shoreline. There are 365 churches in Mykonos, giving the superficial appearance of cloistered peacefulness. Yet, hidden among the twisted maze of narrow streets are the myriad of bars and cabarets that have made Mykonos internationally popular, an exciting, high-living holiday mecca: stage for flamboyant jet-setters. It’s the Elysian Fields of the sun worshippers, its sheltered harbor a haven for yachts and cruise ships. Mykonos is extraordinary, a delicious, alluring apple in the Greek Garden of Eden. 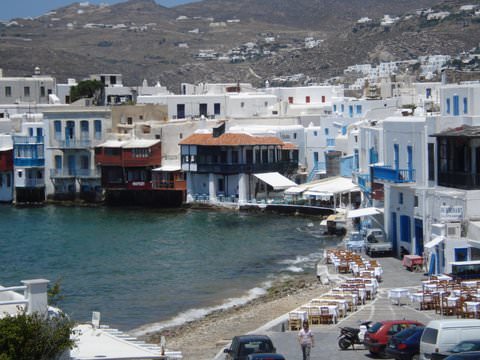 By day, the village is dazzling, the shop-fronts hung with a brilliant array of wares. Cobbled streets curl around the labyrinth of colonnades and arcades. Houses seem to lean against each other; wooden balconies and trellises spill over with magenta bougainvillea and crimson hibiscus. At the end of every whorl of streets, the sea sparkles invitingly. 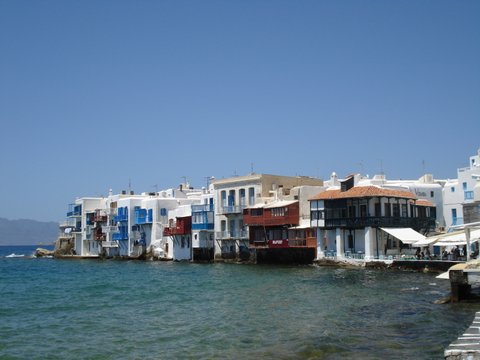 Evening approaches. The whiteness is haunting. Vivid colors of the sunset reflect off the whitewashed walls. The streets flicker with mysterious shadows. I sit at one of the harbor’s tavernas; sip a glass of this cloudy licorice-flavored Greek aperitif; watch the last of the sun’s golden rays turn the evening into sheer enchantment. 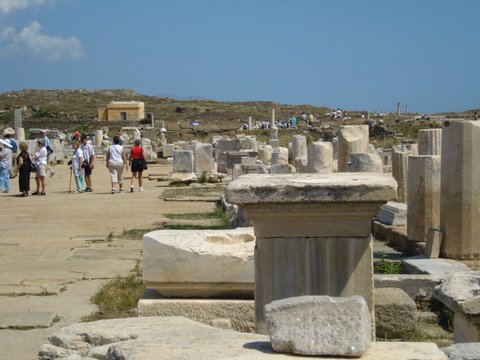 Early in the morning, I took a trip across to the little island of Delos. As the caique approaches the ancient harbor, Delos is a sharp, ebony outline against the pale sky. The soft glow of the morning sun shifts across the bleak, rocky shoreline; an aureole appears over the tumbled ruins. I step off the caique, walk toward the porticoes and pillars of the Sacred Precinct. Delos is barren, desolate. Once a verdant, tropical garden island, lush with palm groves and fields of flowers, Delos was populated from the tenth century BC. The ancient Greeks assembled here to herald the rites of spring. Now the only inhabitants are scores of lizards basking on the fallen altars.

I walk along the Sacred Way, following the footsteps of ancient heroes. Solemn stone lions guard the avenue leading to the Sacred Lake. The lake is now a dry bed, but there is still a palm tree growing on the spot in remembrance of the birth of Apollo. Here, his mother Leto, clasped her hands around a palm tree when she brought Apollo into the world. In this bleak, deserted sanctuary Apollo’s presence is felt. 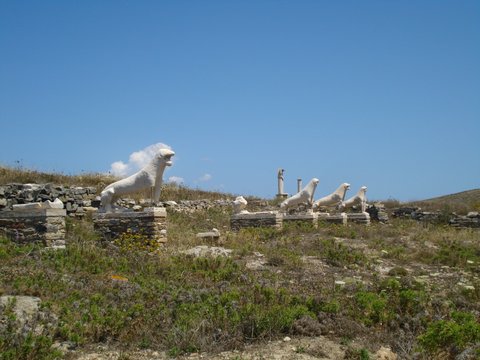 Avenue of Lions in Delos

Across the narrow channel fishing boats bob into the shelter of Mykonos’ harbor. Tavernas and tourist shops begin a brisk trade. Nude bathers frolic in the sea at Paradise Beach. A cruise ship deposits it’s horde of tourists at the port. Another day has begun in the Garden of Eden. Over on Tinos, the bells in the tower of the Church of the Annunciation toll a litany calling the devout Tinians to worship.

IF YOU GO:
There is daily ferry service to Tinos and Mykonos from the mainland ports of Piraeus and Rafina and frequent tour boat service each day between Mykonos and Delos.