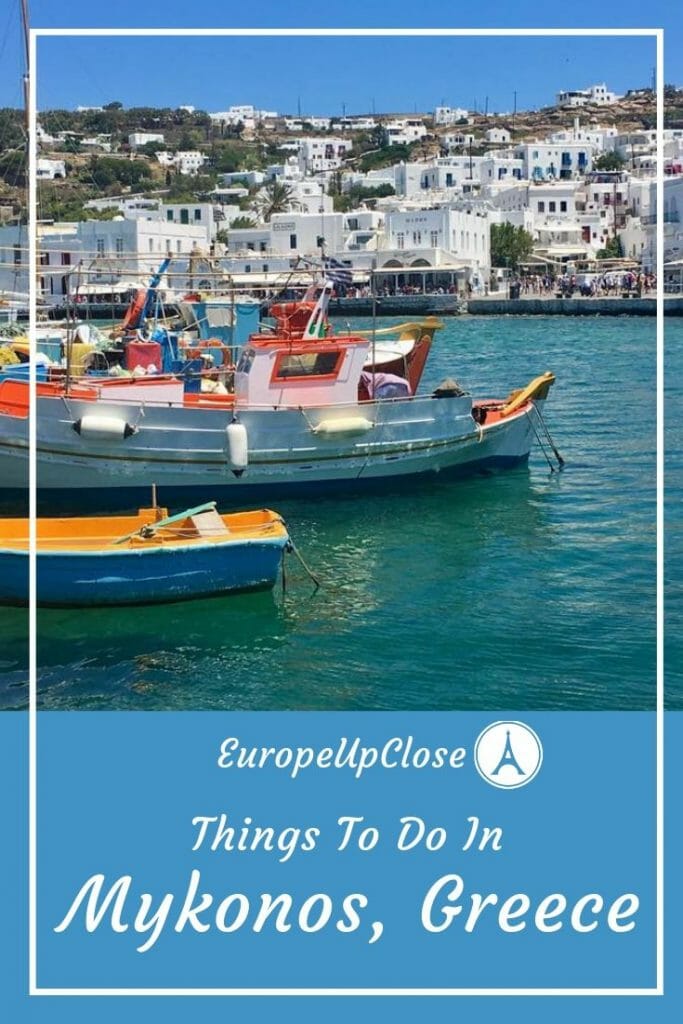 Things To Do In Mykonos, Greece

Island of the Winds is the perfect nickname for Mykonos, the incredibly spectacular whitewashed Greek Island paradise in the heart of the Cyclades. Once a quiet, relatively unknown island, that all changed in the 1950s with the arrival of Aristotle and Jackie Onassis and other celebrities who transformed Mykonos into a party island. Though it still buzzes with energy, excitement and a vibrant nightlife, it somehow manages to retain its old-world Mediterranean charm.

Chora, Mykonos’ capital on our Celebrity Cruise ship, beguiled us instantly. Its stacked, blue-roofed whitewashed sugar-cubed houses were picturesque. Colorful wooden doors and staircases lined with potted flowers added their magic. Like its Santorini sister, this island is a photographer’s dream. Purple bougainvillea climbs over walls and hangs from balconies while oleander and hibiscus fill the air with their fragrant scent.  Mykonos is quite simply, unforgettably intoxicating with its simple and timeless beauty. If you are planning a trip, definitely add Mykonos to your Greece itinerary!

We knew we’d only have one day the island, so, we decided to hit the deck running and make the best of it. We saw everything on our bucket list thanks to having a good plan. 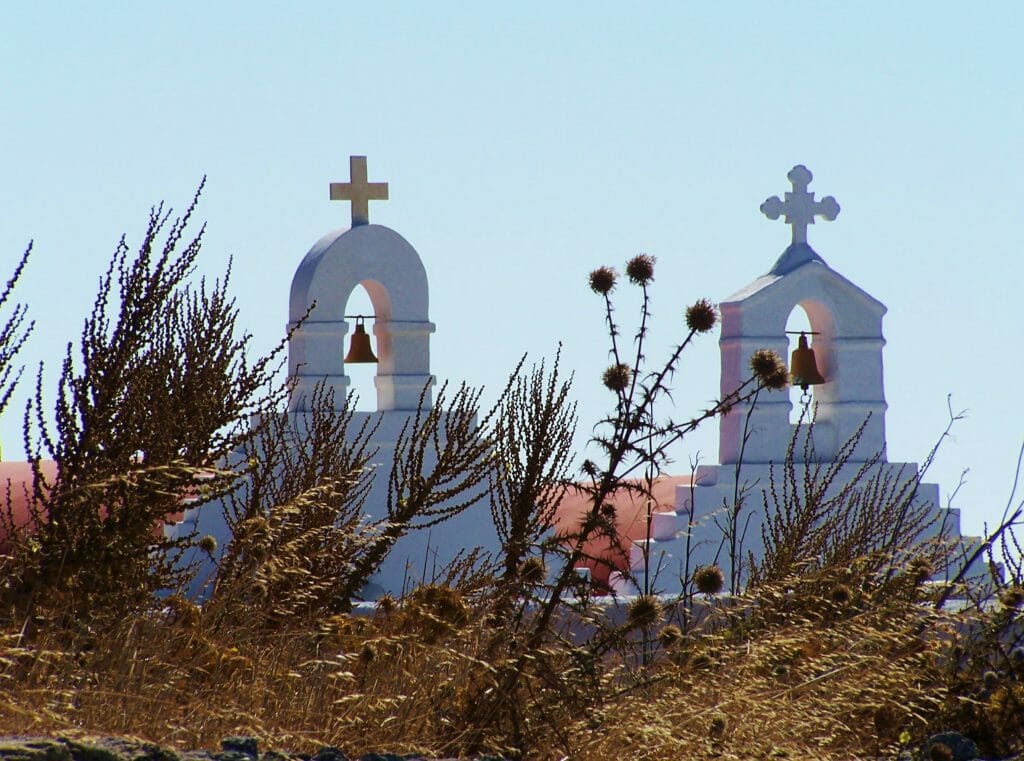 Things to Do in Mykonos Greece – View from rented scooters

To really experience all there is to do on this stunning island, visitors should rent a scooter or an ATV- “quad” as the Europeans call them. There are several rental venues available at the port though it’s highly recommended to make reservations ahead especially in high season. Non-EU drivers must obtain an international permit which we did ahead of time through our local AAA office.

We discovered some of the island’s roads weren’t marked and many signs were “Greek” to us, so we couldn’t read them anyway. We decided to just wing it and each twist and turn in the road brought more awe-inspiring views. Getting lost wasn’t a concern as it’s practically impossible on an island that’s a mere 10 miles long and 7 miles wide. Keeping the ocean to our right, we were bound to eventually come back to where we started, and we did.

We ventured to all points of the compass, even north to the more rural, windswept and largely untouched part of the island. Some of its barren mountainous landscape had a surreal, almost moonlike quality to it. Taking in the endless spectacular views with the wind blowing through in our hair was filled of adventure and definitely the way to go.

If you prefer to go on a guided tour, this is a fun 1/2 day Mykonos excursion that takes you to some of the less touristy spots on the island and still gives you a bit of free time to go explore on your own.

Visit the Windmills of Mykonos 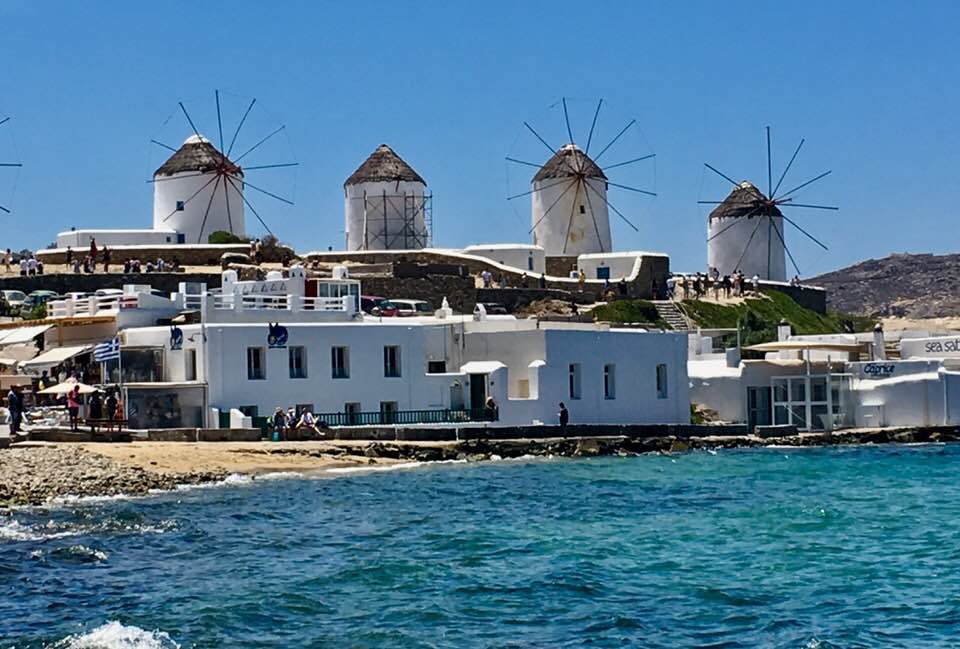 Things to Do in Mykonos Greece – Windmills of Mykonos

Seven iconic thatched windmills standing imposingly on a hill against a luminous blue-skied backdrop was our first view of Mykonos as we entered port. Built by the Venetians in the 16th century, the windmills are the quintessential feature of the island.

Though no longer functional they remain a living testimony of the island’s ingenuity tapping the enormous power of the wind to mill their grain. Hence the island’s famous nickname- Island of the Winds. The stately windmills remain open to the public and its Bonis Mill houses the three-floored Agricultural Museum, the first of its kind in Greece. 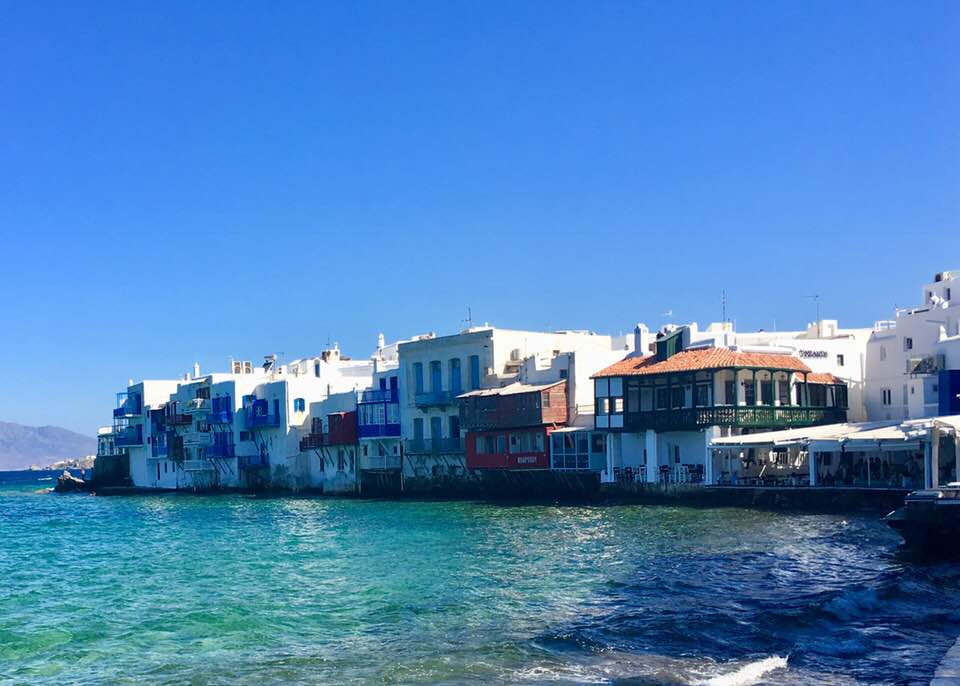 An elegant 18th century housing district called Alefkántra perches precariously on the edge of a cerulean sea. It’s quite easy to fall in love with this charming quarter with its mystical magical appeal. Sea captains built their homes here for rapid loading and unloading of cargo from their vessels. Alefkántra is aptly named Little Venice. Waves literally lap against the house foundations and in high seas, closed shutters keep the raging surf at bay. Balconies of these homes offer spectacular sunset views and breathtaking vistas of the Aegean Sea.

Artists have made the charming neighborhood of Alefkántra their favorite haunt. Little Venice has a magnetic beauty portrayed in priceless art, etchings, and paintings. Today, many of Alefkántra’ s sea captain homes host trendy bars and restaurants, with some of the best views on the island.

Get Lost in Pirate’s Alley 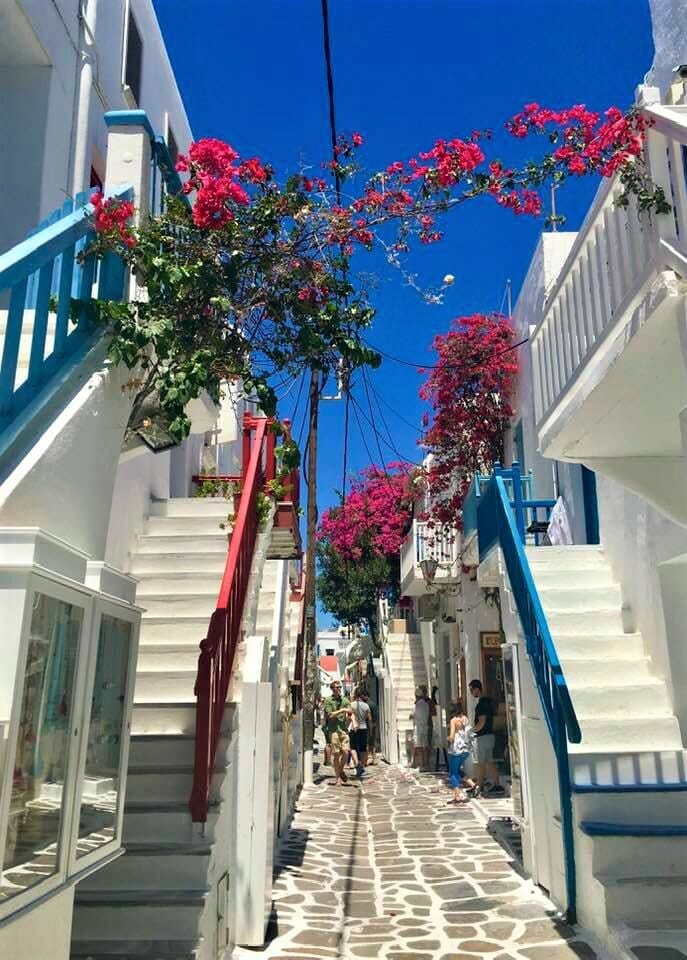 Things to Do in Mykonos Greece – Pirates Alley in Mykonos, Greece

The absence of motorized traffic in the inner part of the city made our exploring an absolute delight. We meandered our way through a fascinating network of sinuous twisting alleyways leading from the harbor town.

Piracy was common in these islands during the 16th and 17th century thus earning the name Pirate’s Alley. The picturesque corridors successfully thwarted invaders from landing on Mykonos’ shores. It must have been quite impossible for the besotted pillaging pirates to successfully navigate their way out.

These alleyways now house some of the most beautiful shops we’d seen on any of the Mediterranean islands. Superb quality boutique clothing, jewelry, Greek sandals, and gift items abound here to the delight of meandering shoppers. It’s a great place to get lost. Need directions? Just ask the mellow unofficial greeter and island mascot, Peter the Pelican. This amiable bird ambles throughout Pirate’s Alley seemingly oblivious to the camera-touting tourists eager to take his picture.

Bask on the Beach 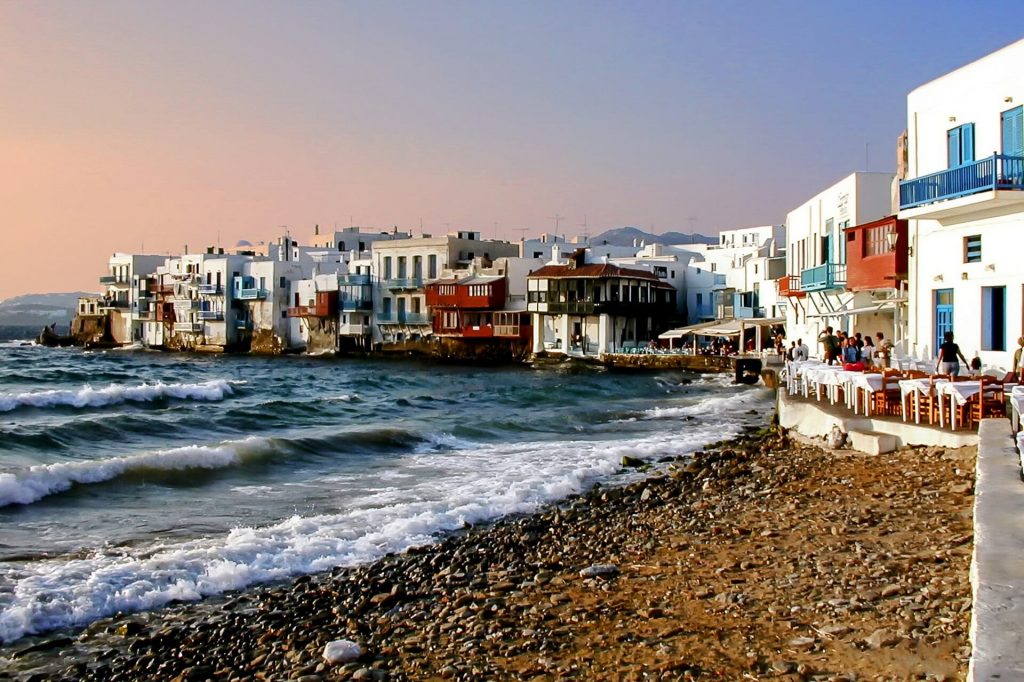 A beach day in Mykonos is easy to plan since the sun shines 300 days a year and rain falls mostly in the months of February and March. Elia Beach, only 6 miles from Mykonos town, is the island’s longest and one of the most beautiful and pristine sandy beaches in Greece. Its crystalline turquoise waters are perfect for snorkeling.

Elia Beach is less crowded than those near Chora (Mykonos Town). A range of watersport rentals is available for those into parasailing, water skiing or windsurfing. For sheer relaxation, we rented luxurious sunbeds and umbrellas for sunbathing. At no additional charge was the magnificent view of yachts and cruise ships appearing over the horizon. Of note for first-time visitors to Greece, particularly those with children: Topless bathing is prevalent and some of Mykonos’s 30 beaches allow total nudity.

If basking isn’t your calling then how about allowing the gentle waves of the Mediterranean to ease you into relaxation. Enjoy a light lunch and the beautiful sunset on this 4-hour leisure cruise. Save your spot here. 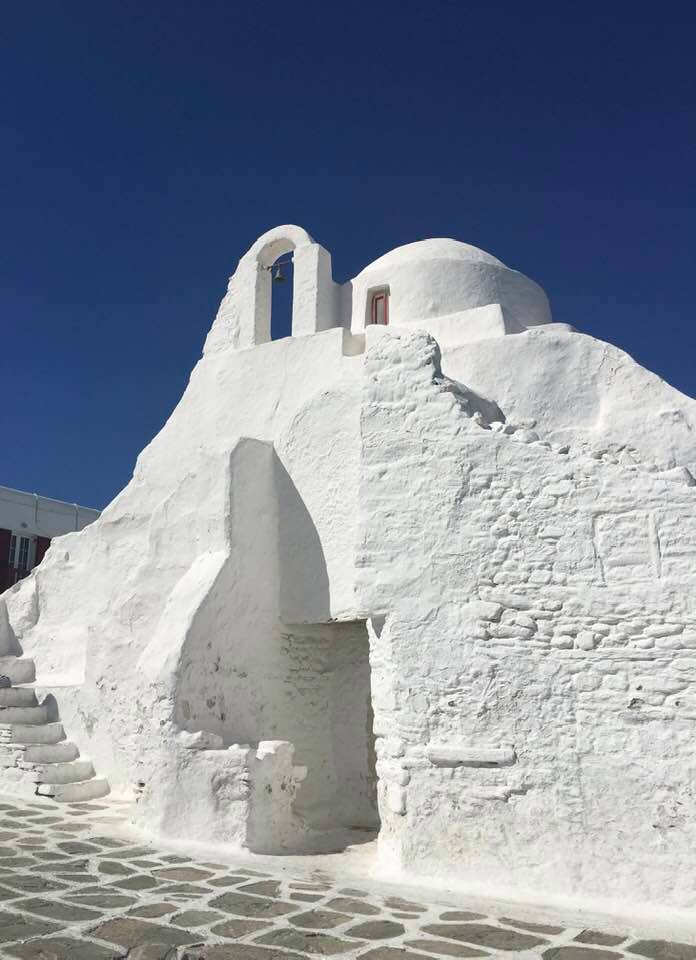 Locals proudly proclaim that Mykonos has 365 churches, one for every day of the year. All over the island, even in the most remote areas, they come in all shapes and sizes.

The Church of Paraportiani in Mykonos Town is one of the most photographed churches not only on the island, but in the world. The whitewashed solid-rock Byzantine church began construction in 1425 but wasn’t completed until the 17th century. The church once guarded the entrance to the town’s castle, long since destroyed. The ground floor consists of four chapels topped with an additional bright upper story chapel accessed by an external staircase. The white structure set against the azure Aegean sky is a magnificent contrast and so representative of everything Greece. 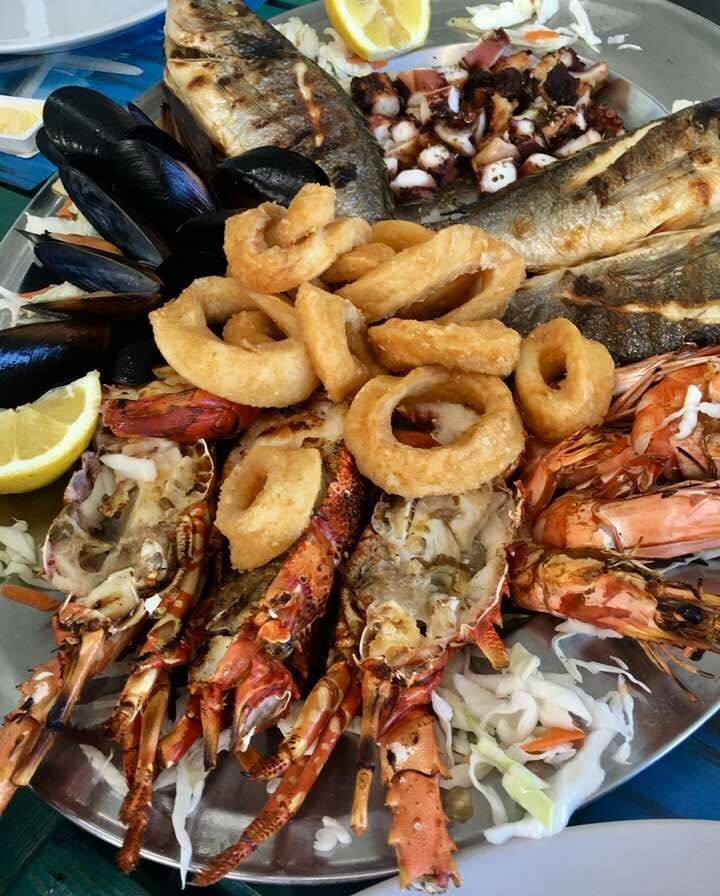 If the unforgettably picturesque view of the Aegean Sea and Mykonos famous windmills isn’t enough, Katerina’s Bar in Little Venice, Mykonos Town serves up the best seafood platters we’ve had in the Greek Islands.

Our Big Seafood Plate for two consisted of mussels, shrimp, calamari, octopus, and Mediterranean slipper lobster and a whole seabass grilled with lemon and olive-oil. It was delectably delightful and perfectly complimented by a refreshing bottle of Greek white wine. Service here is outstanding and unhurried. Finally, a shared sweet Baklava topped with vanilla ice cream that we were so glad to have saved room for. 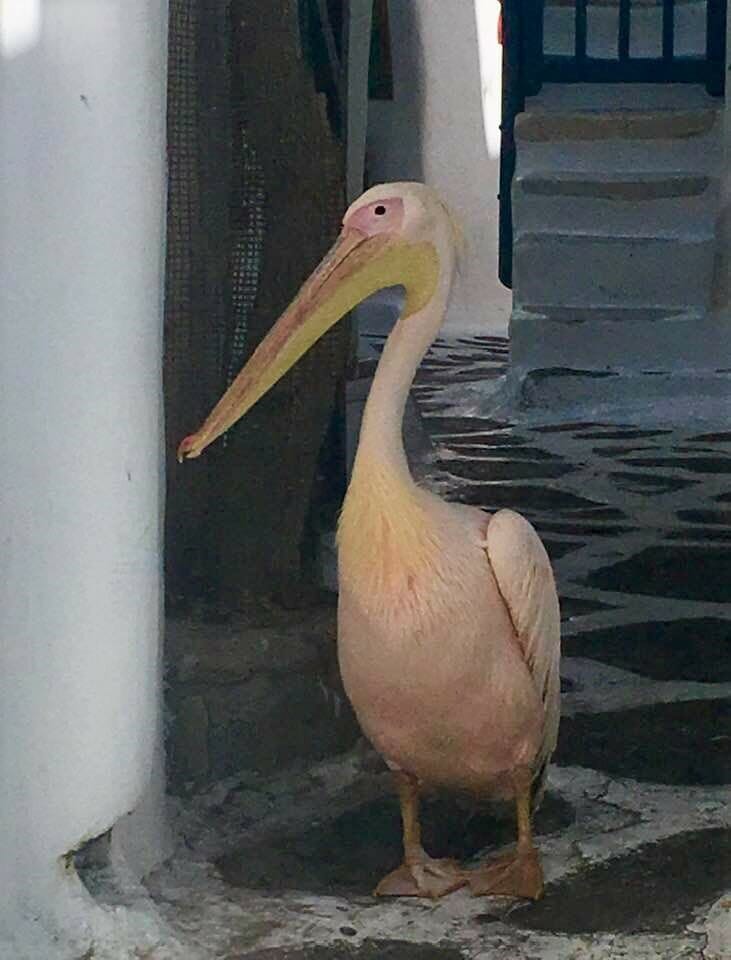 Sailing away from the island toward our next adventure, we remember a quote by American writer, Henry Miller, “It takes a lifetime for someone to discover Greece, but it only takes an instant to fall in love with her.” And so it was with Mykonos.

For more things to do in Mykonos, Greece, check out GetYourGuide.

Things To Do In Mykonos, Greece was written and photographed by Noreen Kompanik

Pin for Later: Things to Do in Mykonos Greece 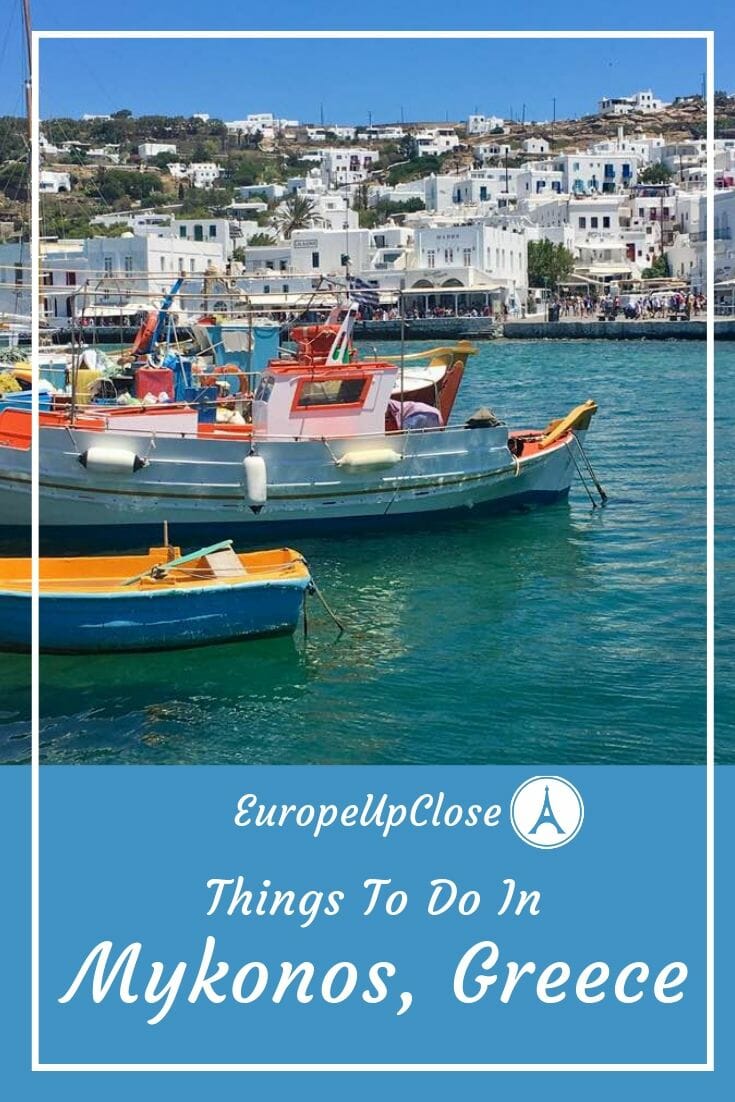 Since I played Odyssey, I was fascinated with this place, I would love to meet him, thank you for bringing me a little closer to this place with your guide.

Unbelievable! That's how I describe everything you talk to me and make me feel in my person, really impressive how good Mykonos looks! I have always wanted to go to Greece for its beaches, its gastronomy and its landscapes, however the opportunity had not presented itself, apparently I will be able to go in winter and I have more than ever fixed to go to this place and see everything you show in the images!

Nice blog sharing of the information about your experienced and activities In Mykonos Greece.