You’ve got to hand it to the English—they do a marvelous job of preserving their heritage, especially in museums. But the Weald and Downland Open Air Museum has taken preservation of ancient buildings to a whole new level. In the middle of the rolling green hills of rural Sussex, about 50 miles southwest of London, you’ll find an enormous 50-acre farm dotted with 45 historic homes, farms, and workplaces from all around Southeast England. 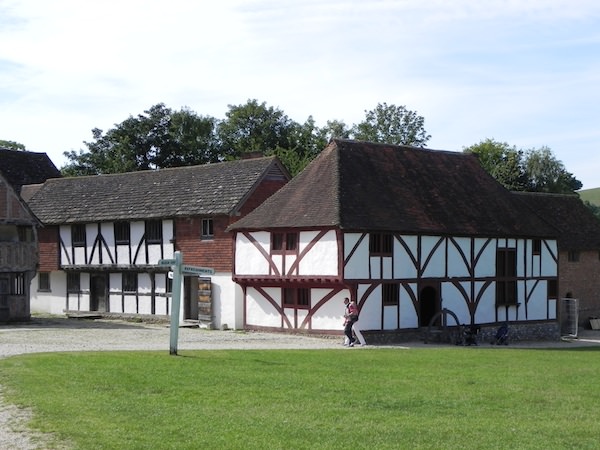 This isn’t like walking through an indoor museum with mock up replica houses and storefronts—it’s the real thing. The buildings date from the 13th century. You can walk through a small country village consisting of a 1620 Market Hall from Titchfield (Hampshire), a 15th century Medieval Shop from Horsham, a 15th century house from North Cray (Kent), and an Upper Hall dating from 1500, from Crawley. The North Cray house still has traces of its original red paint, found underneath the soot that accumulated from the fire on the medieval hearth in the middle of the house. The buildings are so old that they are off center with sloping floors and irregular wallboards. 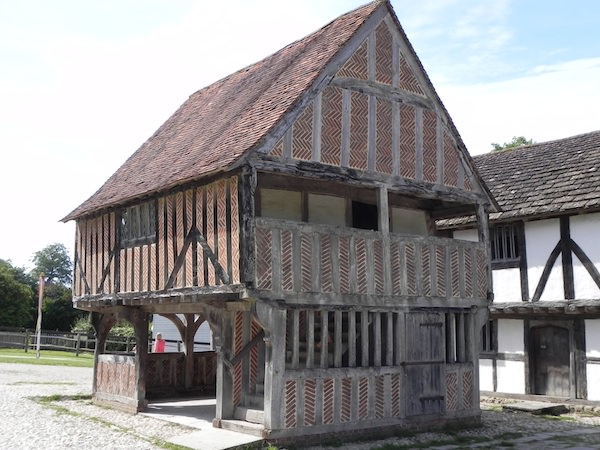 The Market Hall is typical of many such built in the 16th century—an open arcade where goods could be sold or stalls set up by licensed traders. The room on the first floor served as a town council chamber, with a lock-up for offenders. The Upper Hall from Crawley has a large hall that was used as a communal meeting place. 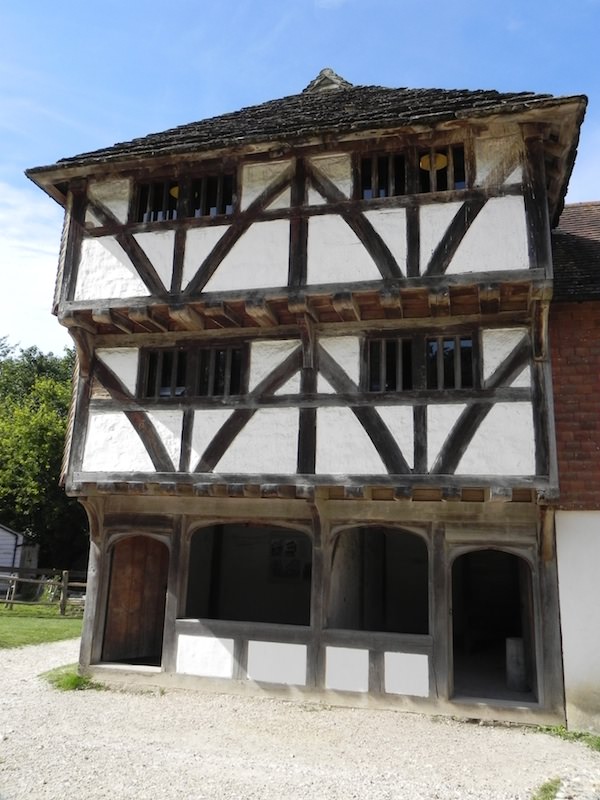 How did this collection of buildings come to be here? They have all been rescued from towns and cities around Southeast England from the North Downs, The Weald, and the South Downs, where they were due to be destroyed to make room for modern buildings. After being relocated to the open air museum and restored to their original form, they now show visitors how the original occupants lived, complete with reproduction period furniture and furnishings, plus tools and utensils of everyday life. 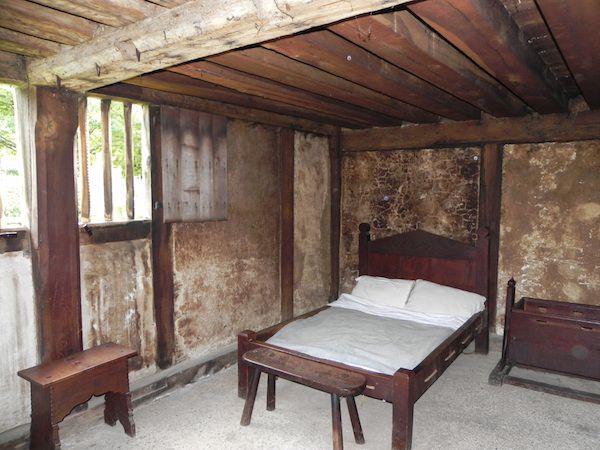 A bedroom in the 17th Century House from Walderton, Sussex

A little further on from the village, I stoop through the entryway of a 17th century house from Walderton, Sussex, constructed of flint and brick, with thick thatched roof, containing the remains of an even older medieval timber-framed building. The garden behind the house grows much the same vegetables, fruit, and herbs as would have grown there 300 years ago: Lilies, irises, hollyhocks, roses, and primroses. 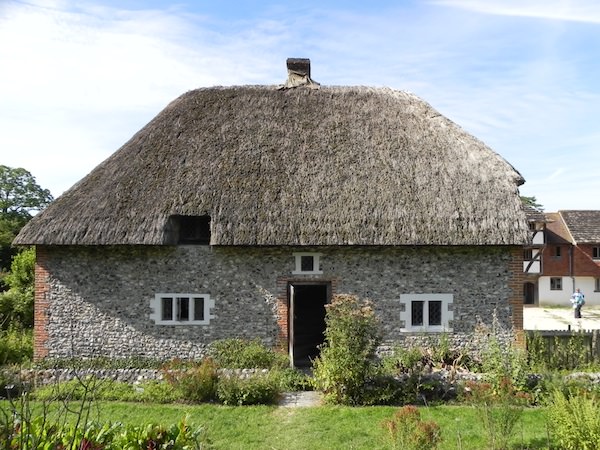 Entering another small farming village, I walk through the magnificent Wealdon House from Chiddingstone; a timber-framed house dating from the early 15th century, with a huge hall in the middle of the house, and an adjacent buttery and pantry. Tucked away in a small forest that looks like a set from a Robin Hood movie, I find the museum’s oldest building, a medieval cottage made of flint, with a dirt floor. It’s actually a reconstruction based on archeological evidence from excavation of a deserted village of Hangleton. 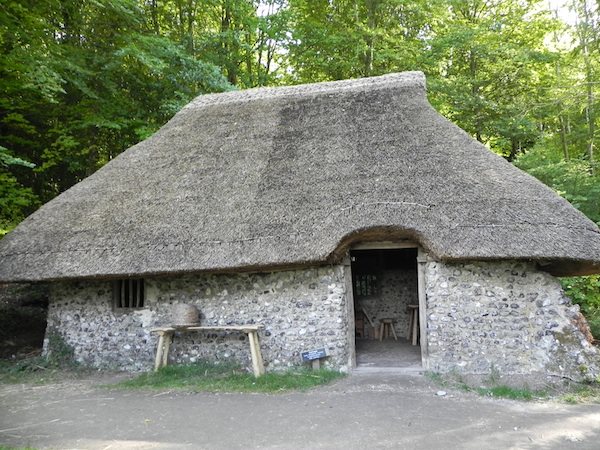 And it’s not just houses that have been relocated here—there’s a granary from Littlehampton, a barn from Cowfold, a cattle shed from Goodwood, a treadwheel from Catherington, a plumber’s shop from Newick, a carpenter’s shop from Windleham, and a watermill from Lurgashall, Sussex.

Looping back to the village, I visit the Watermill where I watch the enormous millstones grinding wheat into flour—they sell biscuits made from the flour downstairs in the shop. 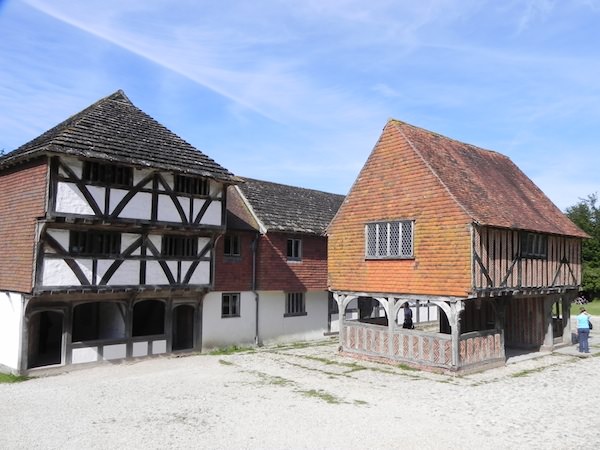 The Open Air museum is set in beautiful farmland and transports you back to medieval times. Allow at least half a day to wander through the historic buildings and gardens, and to watch the tradesmen at work. There’s a great shop packed with all sorts of interesting books and nick-knacks, including medieval cookbooks.