The woman in the ball gown is waving at us. Her hair, elaborately piled atop her head, rises slightly in the breeze and settles back over her brows. “Zdrastvuyte!” she calls out.  She mimes taking a photograph. “Photo with Russian Countess only 100 rubles!”

The actress is one of several who roam Palace Square in St. Petersburg. The pickings are ripe, for a determined Countess; tourists constantly trickle across the square on their way to the Winter Palace, otherwise known as the State Hermitage Museum. The Countess swoops across the plaza, intent on a vulnerable family peering at a map. Strangely, in her 19th-century bodice and puffy emerald skirts, she looks more at home than the modern visitors.

Since the Russian Revolution, the Winter Palace has been open to the public as the State Hermitage museum. Built and augmented by the Tsars, threatened by the Nazis, site of uprisings and revolutions, and now home to over three million pieces of art, the Winter Palace breathes history. It flanks the square, an opulent expanse of sea-green paint, white trim, and glittering gold molding. In sheer size, the museum has no rival except the Louvre. Its contents have made it one of the greatest museums in the world. 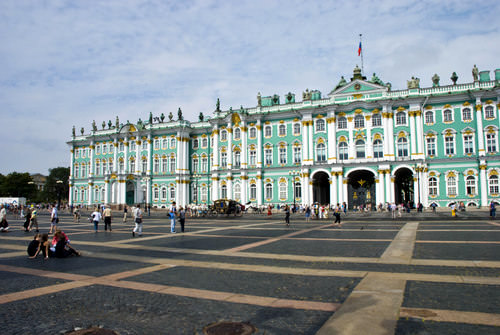 We managed to evade the false Countess, but getting into the Hermitage wasn’t easy. A queue snaked through an inner courtyard. The line rushed hopefully forward every few minutes and stopped just as suddenly. Entrance lines for the Hermitage can take several hours; visitors should arrive early, and bring a book.

Nestled against the banks of the Neva River, the Winter Palace became synonymous with the opulence and power of the Romanovs. During her reign, Catherine the Great collected thousands of art pieces. Her private collection formed the nucleus of the museum. To see the vast range of art on display in the Hermitage would take more time than most visitors care to spend. Covering just the highlights, visitors can still enjoy a full day wandering the palace halls. 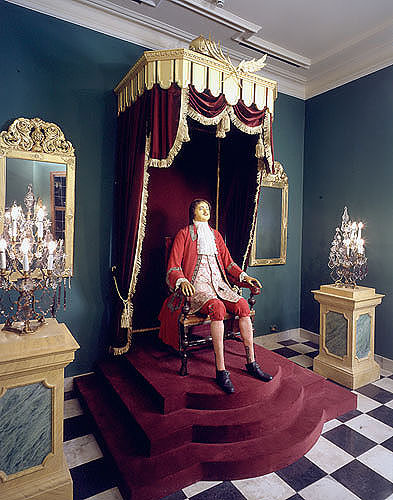 The building itself is as much an attraction as the art within. Visitors ascend into the museum proper via the grand Jordan Staircase. A sumptuous curve, gilded with gold, the staircase sets the tone for the rest of the palace. Entering the Hall of St. George, we felt the weight of long-dead Imperial might. The long hall, flanked with columns, was where the Tsar first received the crown. It also served as a greeting hall for state visitors. As if to emphasize the hall’s purpose, an ornate throne, raised on a platform of red velvet, is the sole piece of furniture.

Other rooms have a more intimate tone. Catherine the Great originally built the Pavilion Hall as a greenhouse. During the siege of Leningrad in World War II, dedicated museum employees and refugees from the shelling grew vegetables on the roof outside. Now, the light, spacious room looks out onto the Neva River, where flat-bottomed boats shoulder their way through the chop. The Hall’s highlight is the Peacock Clock: a delicate bird, carved in gold, perched on a branch above a clock face. Across the floor spread the colorful mosaic-tile faces of Roman gods and centaurs.

Each room has its own personality. Much of the original furniture and ornamentation remains. The Malachite Room, with its fireplace of green stone, looks like the lair for an evil queen. Some of the private apartments feature more tasteful decoration: inlaid wood floors, carved chairs, small statuettes on side tables. For book lovers, the Library has a lovely intimacy: wall-to-wall shelving, stacked with thick-bound old volumes.

The Hermitage’s collection of European art can be overwhelming. We decided to bypass many of the neoclassical works in favor of the Flemish, Spanish, and Italian rooms. Rubens’ voluptuous beauties lounge on large-scale canvases, gazing out into the galleries. In the high-ceilinged Italian Art rooms, canvases by Titian, Raphael, Veronese, and other masters dominate. El Greco casts a stippled light over 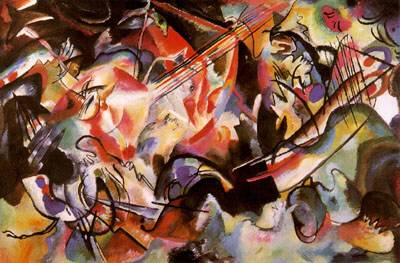 Modern masters also find representation in the Hermitage’s halls. The top floor contains a large collection of Matisse, as well as some Picasso and Impressionist works. I stood for a long time in front of the whimsical colors of Wassily Kandinsky, trying to decipher the curlicues. We found ourselves entranced by the delicacies of Dutch miniature stained glass. Done in the style of religious icons, these pieces feature tiny variations of color and shape. Backlit, they glowed with surprising fervor.

When we had seen enough paintings, we made our way to the Knight Room. This treasure trove of armor and weapons is a glorious throwback to childhood medieval fantasies. Black-helmeted knights prance on stuffed horses; angry maces and ruby-crusted swords call to mind the barbarity of the era. 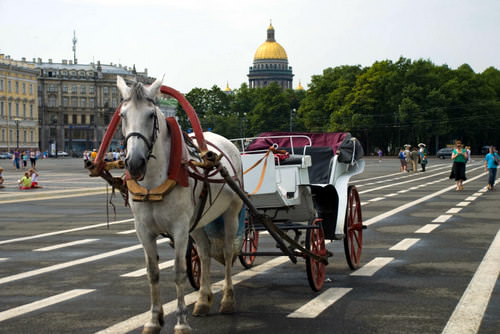 Often overlooked is the Hermitage’s wonderful collection of Siberian Antiquities. The Louvre and the British Museum can match the Hermitage’s Greek, Roman and Oriental collections pharaoh for pharaoh. But the dimly lit rooms of the Paleolithic collection distinguish the Hermitage’s uniquely Russian heritage. The collection contains artifacts that seem half art, half archeology: delicate gold buckles; horned headdresses; leaping horses carved from bronze. The sinuous lines and semi-realistic depictions of animals have given archeologists clues to ancient Russia’s animist worship.

After a day on our feet, we had seen only a fraction of the Hermitage’s splendid offerings. We emerged into the Palace Square as the pale northern dusk began to deepen around us. The Countess sat on a post, skirts pulled up to her knees.  She had taken off her heels and was rubbing her feet.  Next to her, a fellow actor slid a powdered wig from his head, smiling at the end of another day’s work.