If you visit Vilnius, Lithuania’s capital city, make a point of visiting the Old Town as soon as possible upon arrival.  Your principal points of entry — the train station, the bus station, the airport — offer typical post-Soviet surroundings that just don’t do the city justice. But if you head a bit north of any of those places in the direction of “Senamiestis” on the map, you will pass beside the town hall and find a beautiful Old Town that opens up before you as if it were in a pop-up book. 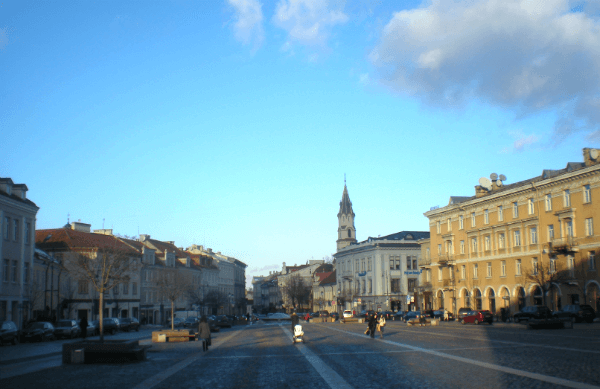 View from the Rotušes, or Town Hall Square

I’ll be honest. I had few expectations about Vilnius beyond cheap eats and strong beer. However, the city made very clear to me why the Lithuanians, Poles and Russians fought endlessly over the centuries to claim it as their own. 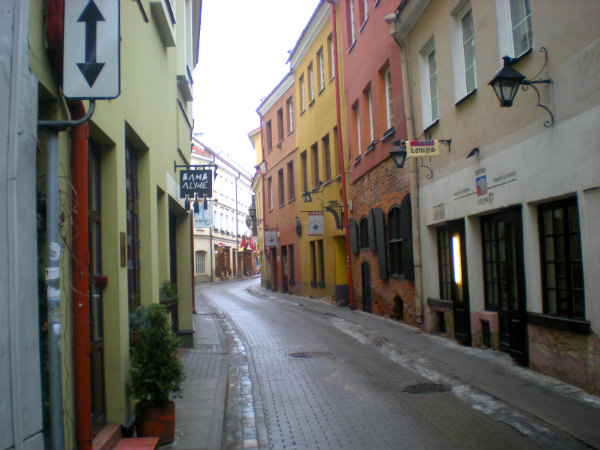 Stikliu gatve, a great side street in Old Vilnius

What to See in Vilnius

Vilinius lies in a shallow valley cut out by the Neris River. The Old Town sits along its left bank and was historically protected by the castle on the adjacent hill. It’s worth the climb (or the funicular ride) to get a panoramic view of the city. Looking across the river, you will see the city’s business district, which has a pretty impressive collection of skyscrapers for a city of a half million. The next hill over features a chapel and the Three Crosses, a monument to the Christianization of Lithuania and a couple of Franciscan friars who were killed during that process.

From the hilltop, check out what remains of the upper castle, Gediminas’ Tower. The tower is an important national symbol partly because members of the independence movement flew the Lithuanian flag above it in defiance of Soviet occupiers in the late 1980s.

Below the hill in the direction of the river is the newly restored Royal Palace, behind which is the Cathedral of Vilnius, a magnificent piece of classical architecture that opens up to a big square. Definitely have a look inside and also explore the crypt below. 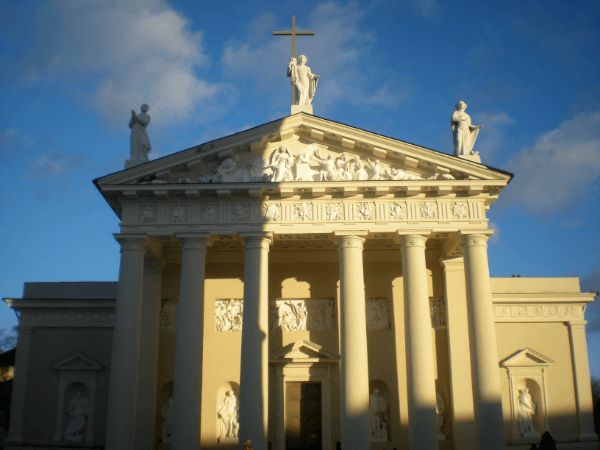 Lovers of history will have a field day with Vilnius. In the last few centuries alone, the city has been the third largest in Poland, a major kink in Napoleon’s supply line, a center of the Yiddish-speaking Jewish world, and the site of a number of acts of authoritarian brutality. For a thorough history of the latter, the Museum of Genocide Victims, located in an old KGB building, is worth a look. There are exhibitions on Nazi and Soviet occupations, the KGB prison and execution chamber, and examples of popular resistance from the people of Vilnius.
Auku g. 2a, LT-01113, Vilnius
Tel.: +370  5 249 81 56

Full disclosure: I never made it to the Museum of Genocide Victims, for which I was chastised by a few Lithuanians. I had intended to go on the Saturday I was in Vilnius, but that whole Saturday got swallowed up by adventures in one particularly interesting neighborhood: Užupis.

Užupis is the neighborhood just east of the Old Town and is often described as “bohemian,” though that adjective didn’t feel quite right. Too many Porsches on the street to be bohemian. But the atmosphere in Užupis fits in pretty neatly with the city that built a Frank Zappa statue (Kalinausko g., near the northwest corner of Old Town).

Since 1997, Užupis has styled itself as an independent republic (tongue firmly in cheek), complete with a constitution and representative government; officials will even stamp your passport on April Fools’ Day. 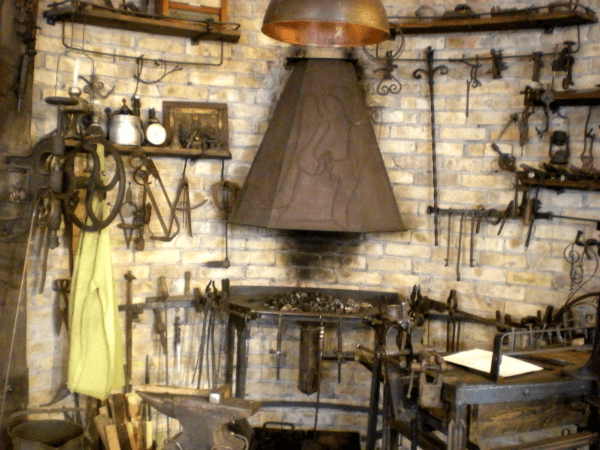 Some work on display in the local blacksmith's showroom

My first stop was in Vilniaus Kalviai, the local blacksmith. The shop is worth a look just for curiosity’s sake, unless of course you would like to buy a wrought-iron chimney shovel for someone back home.
Užupio g. 26, Vilnius, 6229
Tel.: +370  5 230 77 92

Just up from the blacksmith’s shop was a little tavern I had heard about both from locals and from international press reports. When I walked into Šnekutis, the bartender was breaking up some firewood to get the fire going (for actual warmth, not show). I knew the bar specialized in obscure beers from the Lithuanian countryside, but I did not know that the place would look and feel like you were actually in someone’s country house, circa 1870. 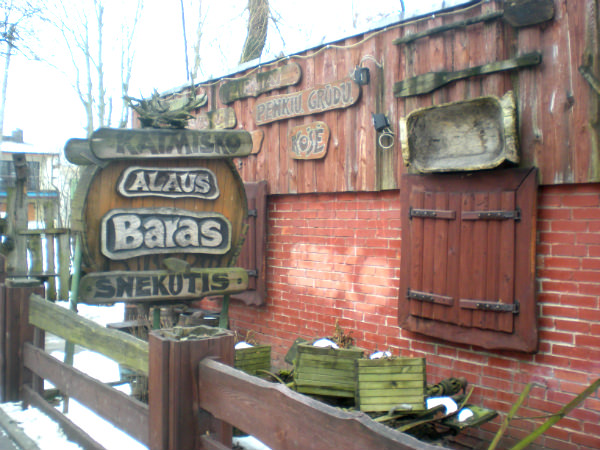 The exterior of the very cozy Šnekutis, in the Užupis neighborhood

The New York Times gave the bars (there’s another in the Old Town) a windfall of publicity by naming Lithuania a beer destination and running a photo of the owner, a grey-haired guy with a deluxe mustache whose unreasonably sassy portraits adorn every single page on the bar’s menu. Actually, he is all over the website, too.

As in neighboring Latvia, the beers generally broke down into “light” (pale lagers) and “dark” (dunkels), and they tasted very much like countryside home brews. But the beer isn’t the real story. The cozy countryside atmosphere, and the smell of burning oak, quickly brought in a diverse crowd, and I found myself talking history with a Mexican student, a local journalist, a former professor and one of the ministers of the Užupis government. Details remain fuzzy.

This was the Užupis that guide books tried to capture in words such as “bohemian.” As with the Old Town, Užupis eventually seemed to reveal its real self, but on its own terms.

This is a good feature of Vilnius for any visitors to keep in mind. The city is old, and its streets are meandering. You’ll do fine if you get a little lost, appreciate the view and let the city reveal itself to you at its own pace.
Šnekutis in Užupis
Polocko g. 7A, LT-01204, Vilnius