I arrived in Poznan, Poland, armed with a bunch of historical facts, figures and questions: how, for example, was this area the cradle of the Polish nation, how was it that the Germans fortified the city but were, nonetheless,  overrun by the Red Army in 1945, and what promted the citizens to rise up in revolt in 1956. 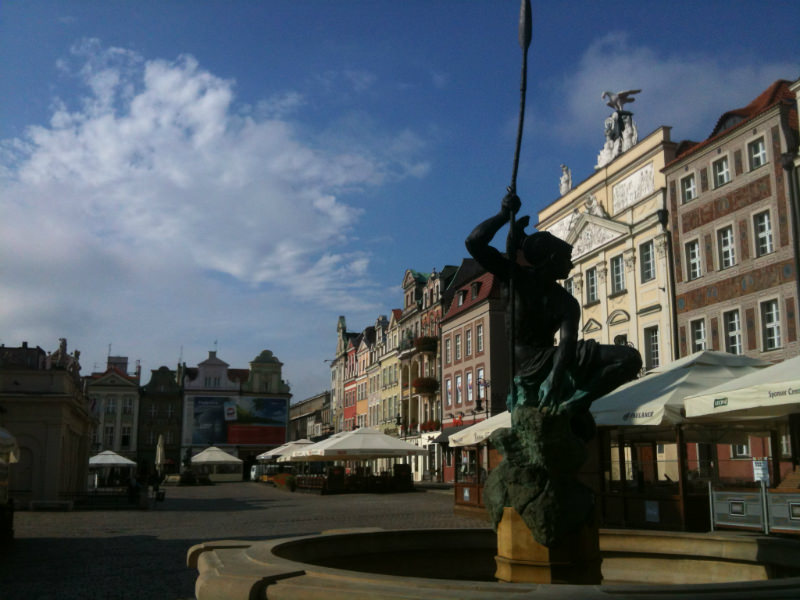 I mean, isn’t the study of history just how we contextualize all the crazy stuff we see when we visit new places in Europe? Isn’t historical context necessary before we can understand and accept lederhosen on adults, or running from bulls through narrow Spanish streets?

Every book or article I could find on Poznan leaned heavily on the city’s rich history. Yet nods to this history seemed to be conspicuously absent throughout the city, save for a monument here or there. Instead, I found a modern metropolis that exuded an almost naive confidence while it wrestled with contemporary issues like gentrification and where to put bicycle lanes.

A Bunch of Potatoes 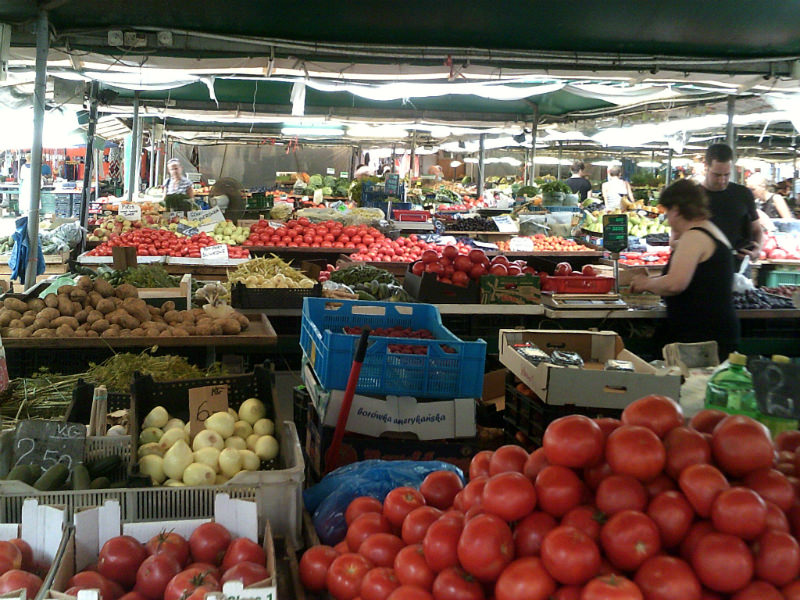 A neighborhood market in the Jezyce district

About 550,000 people live in Poznan proper, and 1.3 million live in the metropolitan area. Other Poles sometimes call people from Poznan “potatoes” (a non-derogatory term that simply refers to the locals’ food of choice) and think of them as being “more German,” which apparently means keen business people who are punctual and attentive to detail.

This was according to Jakub Pindych, one of my city guides from the Poznan local tourist oganization (Poznanska Lokalna Organizacja Turystyczna.) Jakub, who is originally from Lódz, offered an outsider’s perspective on Poznan, stating that there was a certain confidence unique to the people of Poznan which he recognized immediately when he moved here a decade ago.

In the beginning, he couldn’t understand why everybody seemed to be saying, “This is from Poznan”. “That is from Poznan”.  Eventually, he learned that this was just a manifestation of the civic and regional pride people from Poznan feel. 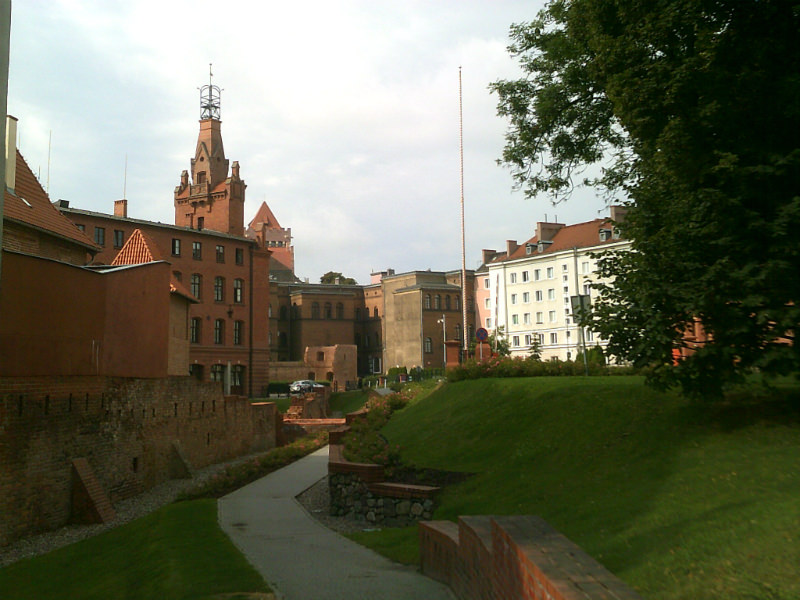 Don’t mistake this for arrogance. This sentiment doesn’t intend to suggest that something made in Poznan is superior to something made elsewhere. Being from Poznan just makes something noteworthy, like beef from Argentina or chocolates from Belgium. The naiveté is in the assumption that everyone talks about his or her own city with the same reverence.

And, sure, every city or region makes some claim to being special. What I found so interesting in Poznan, though, is that the residents seemed to internalize its pride and its history rather than explicitly display it.

The result is a city that appeals to tourists and locals for almost exactly the same reasons. The millennium-old cathedral where Poland’s first king was buried? That also doubles as a great spot along the river to watch the sun set. The old Prussian fortifications? They’re now part of a park where you can relax, go for a run or maybe even catch a Radiohead concert.

As Jakub told me about the cafe where we were having lunch: “If I go here with my family, it’s the strongest recommendation.”

What to See in Poznan

A good starting point is the old Medieval Square, or Stary Rynek. Orient yourself to this spot because it is in the center of the city, and there are plenty of cafes and restaurants with outdoor seating in the summer. The tower in the middle of the square is the Poznan City Hall. Here is where you find the one completely touristy event: Every day at noon, two goats emerge from the clock tower and butt heads in an homage to an old city legend about a couple of goats that were going to be cooked for dinner but escaped and ran amok through the town hall building. 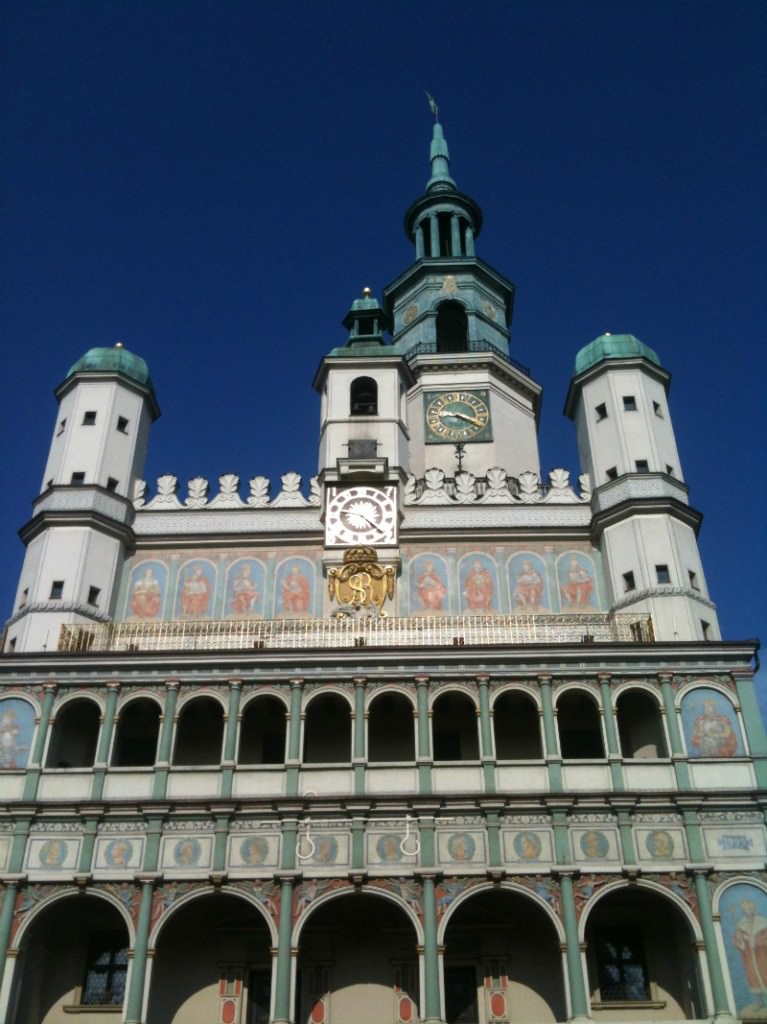 The clock tower with its head butting goats

North of the old town square is the Park Cytadela, the area fortified by the Prussians in the 19th Century. Today, the park offers plenty of open green space and a monument honoring Polish, Russian and Commonwealth soldiers, many of whom are buried here.

East of the city center is Ostrów Tumski, or Cathedral Island, which sits in the middle of the Warta River and features a cathedral that dates back to the 10th Century. The cathedral may have been the site of the baptism of Mieszko I, first king of Poland, in 966, though historical records are not clear. Either way, the cathedral is an important landmark for Poland and Polish identity. 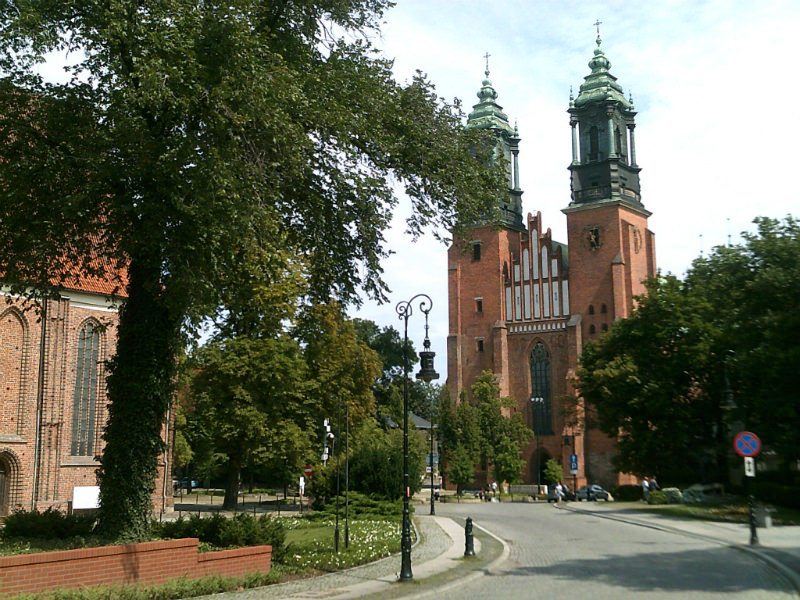 Just behind Ostrów Tumski lies Lake Malta, a man-made lake surrounded by many attractions including an artificial ski slope, a zoo, an alpine slide roller coaster and a water park. The lake itself hosts numerous rowing competitions. This is an especially good spot for families because it is within walking distance of the city center. 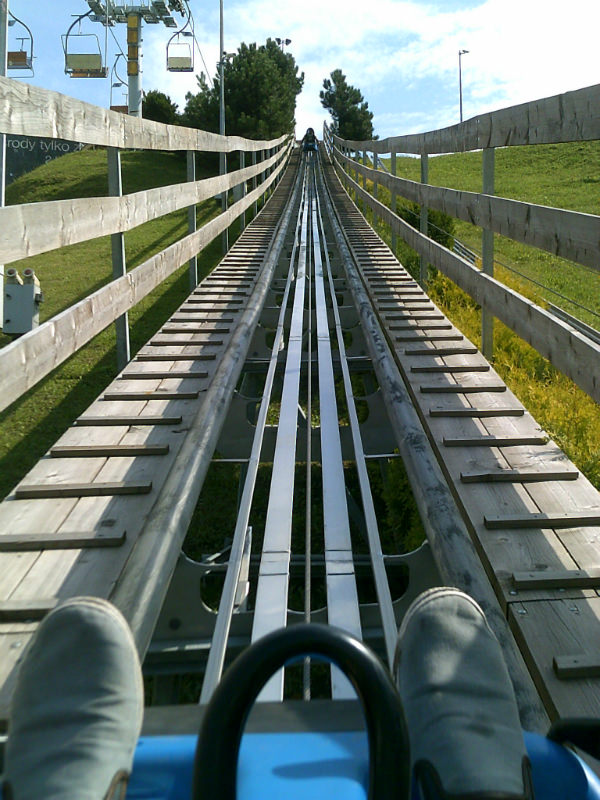 Outside of the city center lie sprawling districts, many of which have seen a rapidly suburbanized middle class develop. Jezyce, just west of the city center across the train tracks, has undergone significant gentrification in the last decade and now boasts the kind of neighborhood bars and gourmet cafes that would have been unthinkable a few years ago. There is also a 19th Century zoo with a few animals, free entrance, and if the line hasn’t already wrapped around the block, get some ice cream at the walk-up stand, Wytwórnia Lodów Tradycyjnych, on Ulica Koscielna.

What I thought told a more compelling story of the city, though, were a handful of once-abandoned buildings that had been given new lives as recreational spaces. The most famous of these is Stary Browar, or Old Brewery, on Ulica Pówiejska in the city center. This huge brewing complex retains most of its old piping and bricks as it was converted into a sleek retail and art exhibition space. Unless you have some shopping to do, you might not have a reason to visit, but the building itself looks great against the skyline. 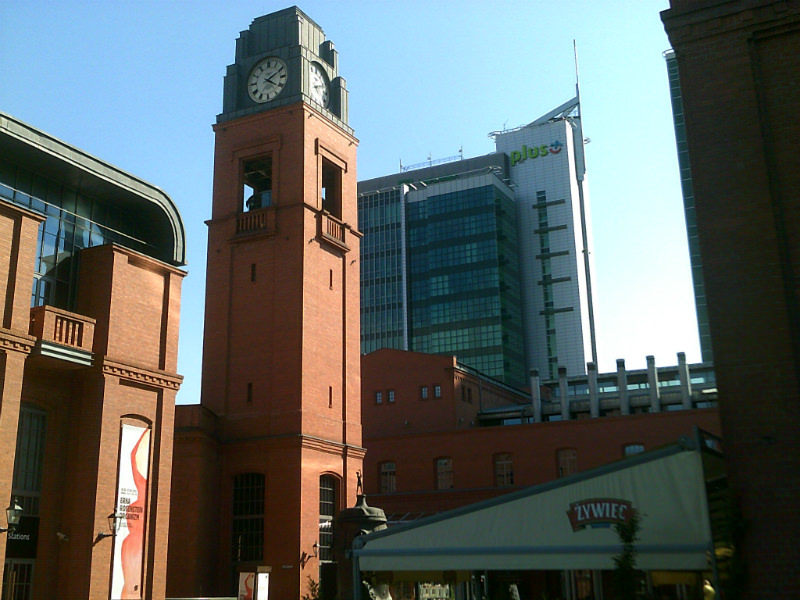 On the western edge of the city center, at the Park Wieniawskiego along the train tracks, is Nastawnia, an old train control station turned cafe. It is worth checking out if you need a lazy place to have a coffee. 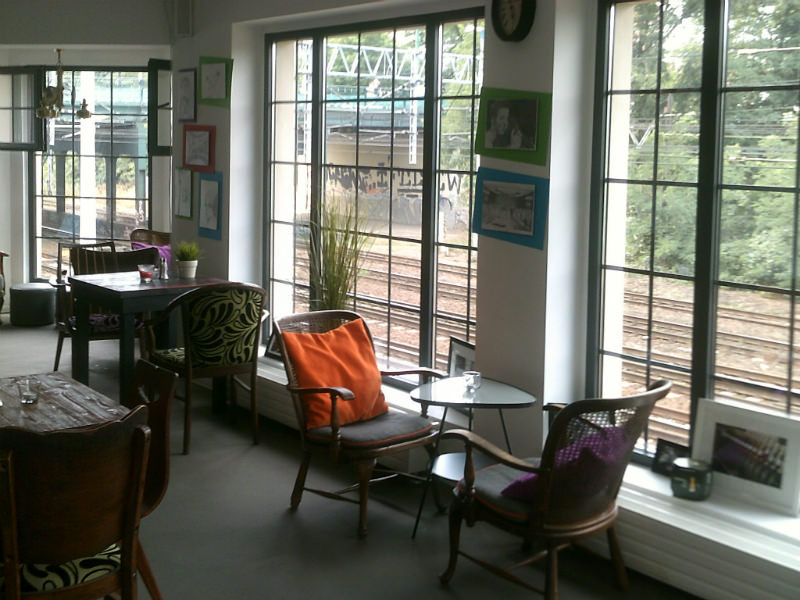 Finally, my favorite spot in town was KontenerART, a self-styled mobile cultural center made of old shipping containers. It changes locations every summer, but this year it was situated on top of the bank overlooking the river, and the interior space was filled in with sand. This was repurposed space at its best: Industrial leftovers turned into the MTV Beach House. 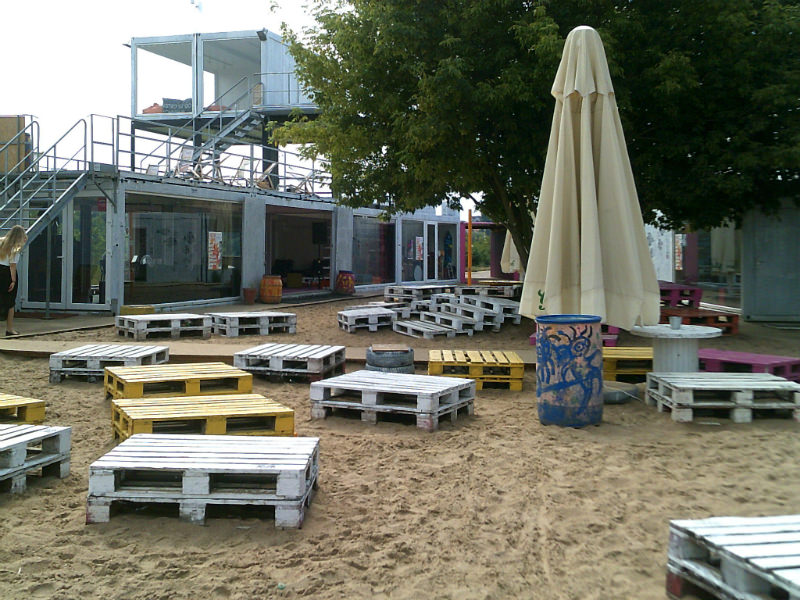 KontenerART in the early afternoon, before the DJs and volleyball players arrived

Full Disclosure
This trip was sponsored by the City Promotion Office of Poznan, who not only took care of travel and lodging but also arranged some five-star dining experiences. Significant parts of this trip were spent exploring two of my favorite things, good food and good beer. Look for posts on both in the near future.

I have listen a lot about Poland by my friends and i am planning g to visit that next month and your what to see in Poland sections will help me a lot to make my trip awesome.