I arrived in Kaunas, Lithuania in the middle of an unseasonably warm week. It was still the dead of winter, but the snow pack was melting, and rain was falling. This made for a great deal of splashing and awkward puddle-hopping. 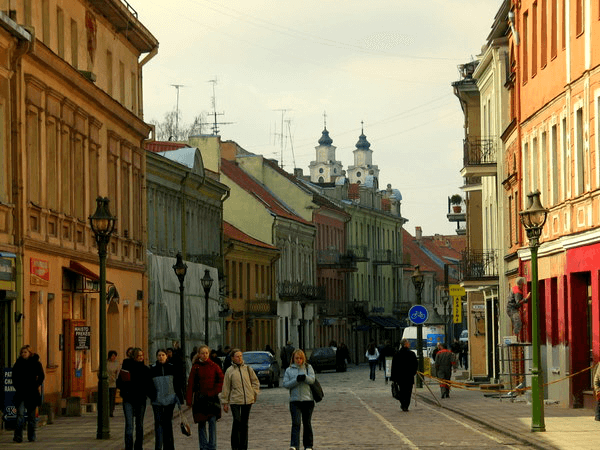 Laisvis aleja, the pedestrian street that takes you into the Old Town - by zsoolt

The Lithuanians may have tried to warn visitors about their weather when they named their country. In Lithuanian, the word for rain is “lietus,” and the people call their country “Lietuva.” Why we anglicized out this crucial piece of information, I will never understand.

Fortunately, most of the things that make Kaunas exciting are huddled together near the river fronts, so you never have to walk far to find an interesting or cozy place. Your best bet is to start in the central district and walk along Laisvis aleja, the linden tree-lined main street, which is pedestrian-only and feeds right into the Old Town.

Near the eastern end of Laisvis aleja is the Church of St. Michael the Archangel, a powerful looking structure that is 160 feet tall at its apex in the middle dome. The church was built toward the end of the Imperial Russian period in the 1890s and served as much a military function as a religious one. Today, it is a Roman Catholic church, the faith to which most Lithuanians belong. 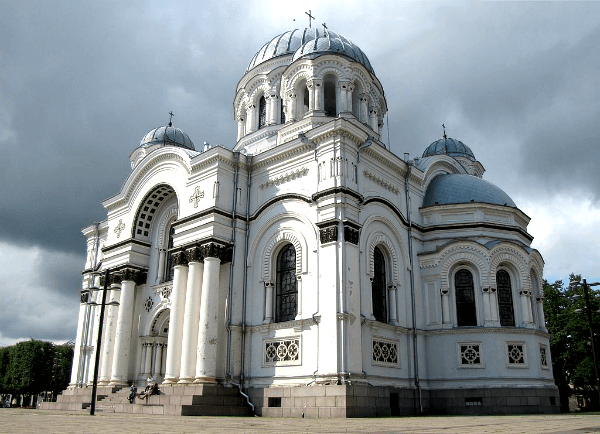 The Church of St. Michael the Archangel

Religion played a major role in the city and country’s history, and the Kaunas Synagogue, on E. Ožeškienes gatve just before you reach the Old Town, can attest to this. Before the Second World War, Lithuania was a center of Jewish culture, but almost all of the Lithuanian Jews were killed in the Holocaust. (Anyone interested in WWII history should also visit the Ninth Fort Museum, on the outskirts of the city, which depicts the terror Lithuanians suffered under Nazi and Soviet occupation.) 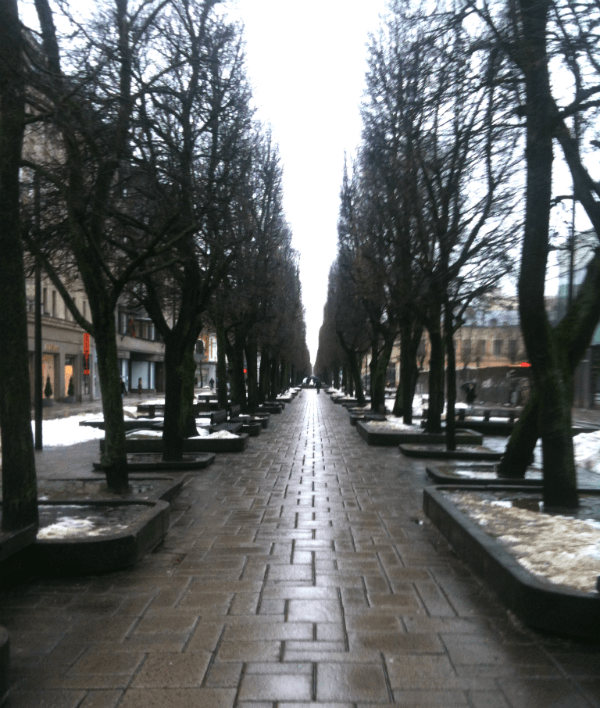 The Old Town lies at the convergence of two rivers, the Neris and the Nemunas, where medieval Lithuanians built the Kaunas Castle to defend against invading Teutonic knights. The city has created a large park space between the castle and the rivers, which is probably very nice in the summer (not so much in the winter).  Behind the castle is the 16th Century city hall building with its square, the perfect place to stop off for a drink and admire the panorama.

Basketball: The Other Major Religion

The primary purpose for my trip to Kaunas, however, was to catch a BC Žalgiris basketball game and see up close how crazy Lithuanians are about basketball. 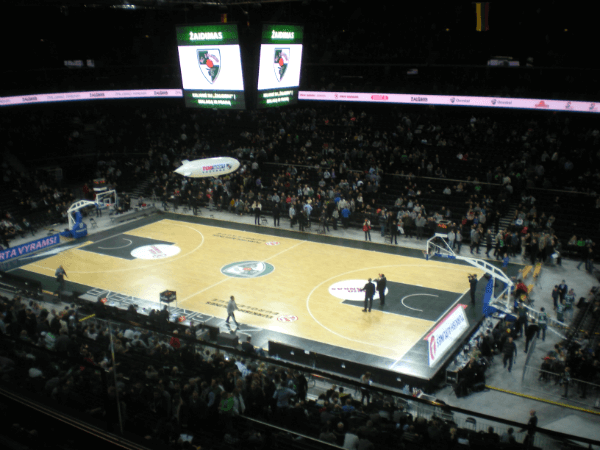 Background is necessary: Basketball was always a popular sport here, but it became one of the Lithuanian symbols of resistance to Soviet occupation in the 1980s and early ’90s. The Žalgiris team beat the Soviet Army’s team, CSKA Moscow, for three consecutive Soviet league titles in the 1980s, and Lithuanian stars formed the core of the Soviet gold medal team in the 1988 Olympics. After independence, the new Republic of Lithuania didn’t have enough money to send its team to the 1992 games in Barcelona, so they got financial backing and awesome tie-dye warmups from the Grateful Dead. That team won bronze. NBA fans should remember two players from the team, Šar nas Mar iulionis and Arvydas Sabonis, both from Kaunas.

So, on a wet Thursday night, fans filled the 15,000-seat Žalgiris Arena to about 70% capacity and stuck around until the very end, even though Kaunas beat Berlin pretty decisively. All in all, a great crowd experience.

When You Get Hungry in Kaunas

Perhaps because Kaunas has a large student population, there are pizza places everywhere. Skip them all. 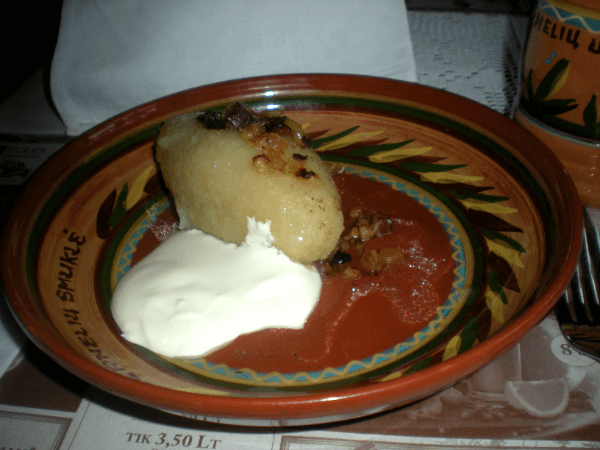 Cepelinas, a boiled potato pastry that is literally not for the faint of heart

I’ve found that after a day of exploring, particularly in the rain, nothing can taste better than the local comfort food. The locals’ notion of comfort food gives you a certain insight into what things people value, which is all the justification I need to order food as gluttonous as I did in Kaunas.

I ended up at a traditional restaurant called Berneliu Uzeiga, thanks to a local’s recommendation. (And his discount card. Important insider tip: Go where locals use a discount card.) He advised me to try the cepelinai (literally “zeppelins”), which are huge potato pastries filled with meat then covered in sour cream and bacon. I ordered one boiled and one boiled then fried. Somewhere, a deep-fried Twinkie vendor at a county fair must have blushed.

You just need to take one look around Kaunas to see that no one actually eats these heavy foods every day. This is more like what you would expect when visiting someone’s Lithuanian grandmother in the countryside. But with a local beer, it’s a nice way to punctuate a trip to the city.

Thanks for your article. It gives me a sense of what to expect when I travel there.

[...] may be Lithuania’s capital and largest city, but Kaunas has its own contributions to make. Find out what makes this Baltic city tick (and don’t forget your [...]

I really enjoyed this article. I know very little, if anything about Lithuania and this was very informative and interesting.

Thanks, Ruth. Everyone there told me I need to return in the summer when the weather is much nicer. I just might take them up on that.