Puglia’s Cuisine is seafood rich and fresh, and that includes Puglia’s antipasti. Ricotta-stuffed mozzarella, swordfish carpaccio, fresh ricotta wrapped with prosciutto and dribbled with balsamic, stuffed mussels, stewed sweet bell peppers, marinated octopus, and mushroom fonduta–the parade of antipasti seems endless when dining in Puglia restaurants. Commonly listed as Antipasto della Casa or simply Antipasti on the menu, these collections of appetizers are often difficult to anticipate if you’re not familiar with Puglia-style cuisine. How could anyone predict that ordering one dish, which is named simply “antipasti” and has a  10 euro price tag, can result in 7-10 small plates of uniquely prepared food? And even if you are familiar with Puglia’s antipasti, you never know exactly what the chef has on the menu. This article will help you know what to expect from Puglia’s antipasti.

Puglia’s cuisine in often referred to as cucina povera, which means cooking for the poor, and the region’s poor economy has resulted in many hearty, vegetable-inspired dishes. The region’s proximity to the sea (especially the Salento Peninsula) results in many seafood dishes as well. Vegetables and seafood are thereby the main components of Puglia’s antipasti. Local cheeses are next on the list, including mozzerella, burrata (a delicious fresh cheese that oozes cream), fresh ricotta, cacio ricotta (an aged ricotta), and scamorza.

Every restaurant is different of course, but almost every restaurant features an Antipasto della Casa on its menu (often it also says minimo due persone, which means minimum of two orders). Depending on your appetite, the antipasti could be enough food to serve as a complete dinner. It is customary to order one antipasto per person, and the food is served family style. For example, if there are four people, then a plate with 4 small slices of Eggplant Parmesan will appear, or 8 stuffed mussels. If you want to share an antipasto between 2, it is easily accommodated for the most part, however, you may find a few dishes difficult to divide.

If you do not like seafood or want to focus only on seafood, do not hesitate to tell your waiter and the kitchen will likely be able to produce an antipasto accordingly. 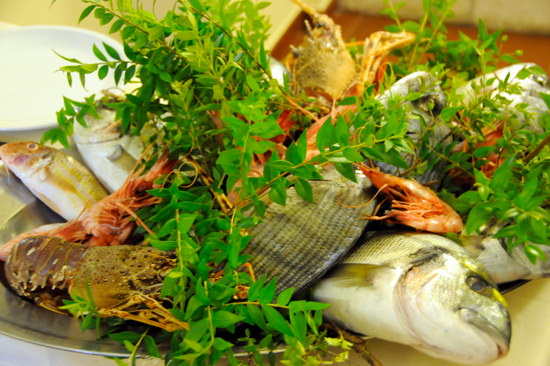 I like Puglia’s antipasti, in part, because they constantly supply me with new, unexpected flavors, but I also have several favorite dishes. Mushroom fonduta, for example, is a cheese and mushroom fondue that comes in a clay pot. Unlike French or Swiss fondue, fonduta is meant to be scooped out of the bowl and eaten off of a plate. If it is fall, then it is mushroom season in Puglia, and fresh porcini, crimini, and oyster mushrooms are available. Another of my favorite dishes is baked carrots, potatoes, and artichokes, drizzled with excellent, local olive oil and topped with fresh arugula. Puglia produces 2/3 of Italy’s olive oil, and it is some of the best in the world. A dish of stewed peppers, which sounds quite uninteresting, is also one of my favorites.

In short, though restaurant menus rarely explain the components of an Antipasto della Casa, I highly recommend ordering one to sample the traditional cuisine of Puglia.