Gherla, Romania is a town with 24,000 inhabitants and a character all of its own. Its downtown is little changed since it was first laid out in the 18th century by a community of Armenians who settled here in Transylvania after fleeing invading Tatars. 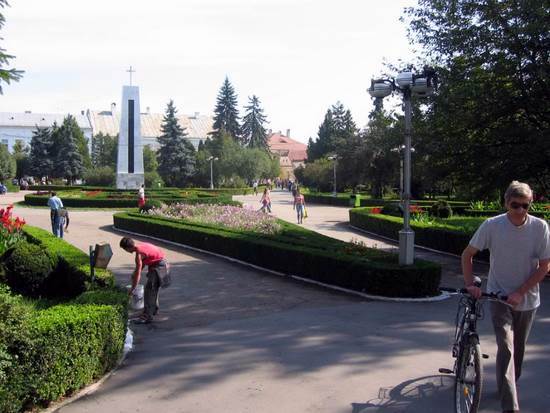 Though a settlement has been here since the 13th century, the immigrants decided to create a new town center on land that had not previously had streets or houses. They designed a regular grid of square blocks – something that would later become common in the US, but remains unique in Romania. Built in the Baroque style popular at the time, Gherla’s orderly rows of buildings are rather stately, with their large, evenly-placed windows framed by ornamented facades. Some streets are lined with broad beds of roses or marigolds, and since most buildings are single-story, Gherla’s churches retain the prominence they had when they were built.

The Piata Libertatii, a pretty square filled with grass and trees, is the town’s centerpiece. Passing by that square is the main thoroughfare, which is called Strada Bobalna to the north and Strada 1 Decembrie 1918 to its south. Locals just call it “Principala”. Piata Libertatii is dominated by the Catholic church of the Holy Trinity, built by the Armenians in 1748-98. While Michael Apafi, the Transylvanian prince who granted them residence here, had hoped to turn them into Protestants, they met him halfway by shifting from their traditional Armenian Apostolic Church to the Armenian Catholic Church. 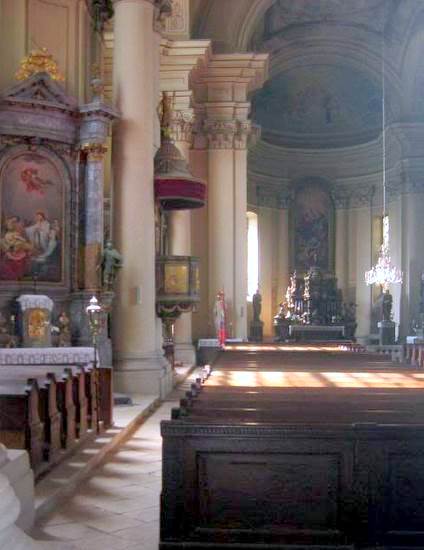 The church’s interior is vividly painted and full of expressive sculptures of saints, some endowed with halos dotted with small light bulbs. There is a painting of Christ being taken down from the cross, attributed to Rubens or a pupil of his. This was given to the local Armenian community by Austrian emperor Franz when he sought their material assistance for a war. Much later, at the end of World War II, the painting landed in Budapest. In 1952, Hungary gave it back to Romania, but it was not until 1999 that the painting was returned to Gherla. In the walls of the church’s vestibule, some people have scratched messages to God. Some simply say “ajuta-ne doamne” (help us Lord). Others are more specific, requesting a good exam score or admission to a particular college. 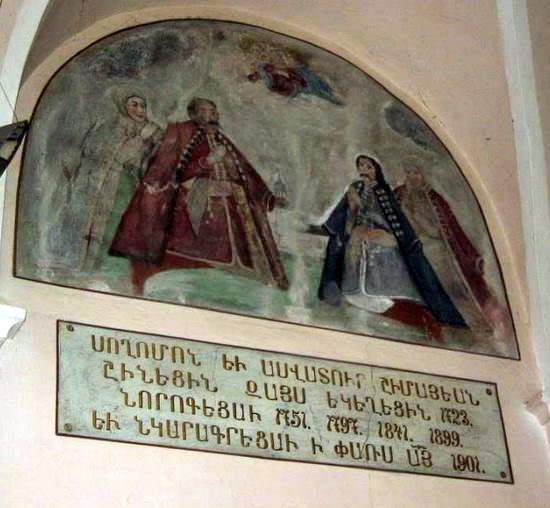 A couple of blocks further east, on Strada Closca, is the intriguing Salamon church, the first one erected by the Amenians in the 1720s. Its walls have paintings whose captions are written in the unique Armenian alphabet. A staircase leads to a pulpit decorated with wood panels depicting the four Evangelists. Effigies of saints stand to the left and right of the main altar area, including one of St. Anthony in his brown habit, holding the Christ child. 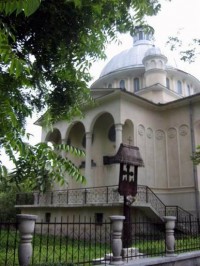 A newer and grander edifice is the Romanian Orthodox church, serving what is, today, Gherla’s largest ethnic and religious community. Set off to the west of Strada Bobalna in a park of its own, it is white with a glittering silver dome. Continuing past the church over a little bridge, you come to the main part of this pleasant, large park, which contains massive new statues of Romanian cultural figures like the poets George Cosbuc and Mihai Eminescu. At the center of the park is a circle from which paths radiate, and in whose middle is a fountain with a sculpture of three dancing women. 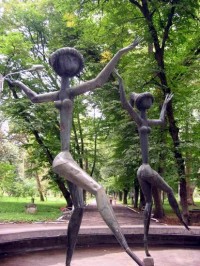 Further north lies an area that was Gherla’s center before the Armenians came. The difference is palpable, as the grid gives way to a maze of winding streets. In this area is a building which could be a tourist attraction, were it not in use as a high-security prison. It started life as a castle with construction begining  in 1540 and dragging on into the 17th century. Designed by an Italian architect in the Renaissance style of the day, it has a symmetrical ground plan and has been a prison since 1785. Though it has been chopped up and modified, parts of the original castle can be tantalizingly glimpsed over the modern, outer walls with their high surveillance towers. The castle is reached by taking Strada Andrei Muresanu westward off Strada Bobalna, and then turning onto Strada Cetatii.

Gherla’s main shopping street, Strada Avram Iancu, leads east off Piata Libertatii. Full of hardware and home appliance stores, it is effectively pedestrianized, in the sense that cars rarely venture down it and people wander all over it. 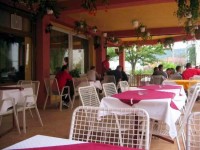 The nicest restaurant in Gherla is Conte, located on Strada Theodor Sperantia, just off Strada 1 Decembrie 1918. In warm weather, it is pleasant to eat on the big patio surrounded with baskets of flowers. Failing that, there is Cola, a three-star hotel and restaurant with a terrace. It is located on the west side of Strada Bobalna. The large park near the Orthodox church contains a big, round terrace, where they serve drinks and have festive evenings. The only foods available here are mici (grilled meatballs) and packets of snacks.

Gherla is, indeed, another fine example of the successful melding of the traditional with the modern in a medium size Romainian town. I recommend it.

Written By David Hill for EuropeUpClose.com

I want to visit gherla in march. I will be coming from. Budapest and would like to contact a guide Can u help?

Embracing the quintessence of Romania is this district called Gherla. Being a serene location, Gherla's exquisiteness captures your heart at first glance and what you do, the overall beauty of Gherla is unavoidable. while staying in Gherla, you'll feel like living in a city that's a part of fairy tale.

It's certainly a very small part of Romania, however, I feel that it's the most beautiful place not only in Romania but also in the entire Europe.

Being in Gherla, you'll witness the simplicity of people completely indulged in their daily activities living far from the hustle-bustle of the daily life.

I seriously feel the what I wrote above Gherla isn't perfectly portraying the eternal beauty of Gherla and the real world that I witnessed in that tranquil city.

Thanks and Regards, Jonathan Jones