Sibiu is a city in the heart of Romania, but its other name, the unmistakably German Hermannstadt, hints at a whole different history. At two different periods – during the Middle Ages and in the 18th century – this beautiful place was the chief city of a German-speaking Transylvania. While today it is mostly populated by ethnic Romanians, the German-speakers were 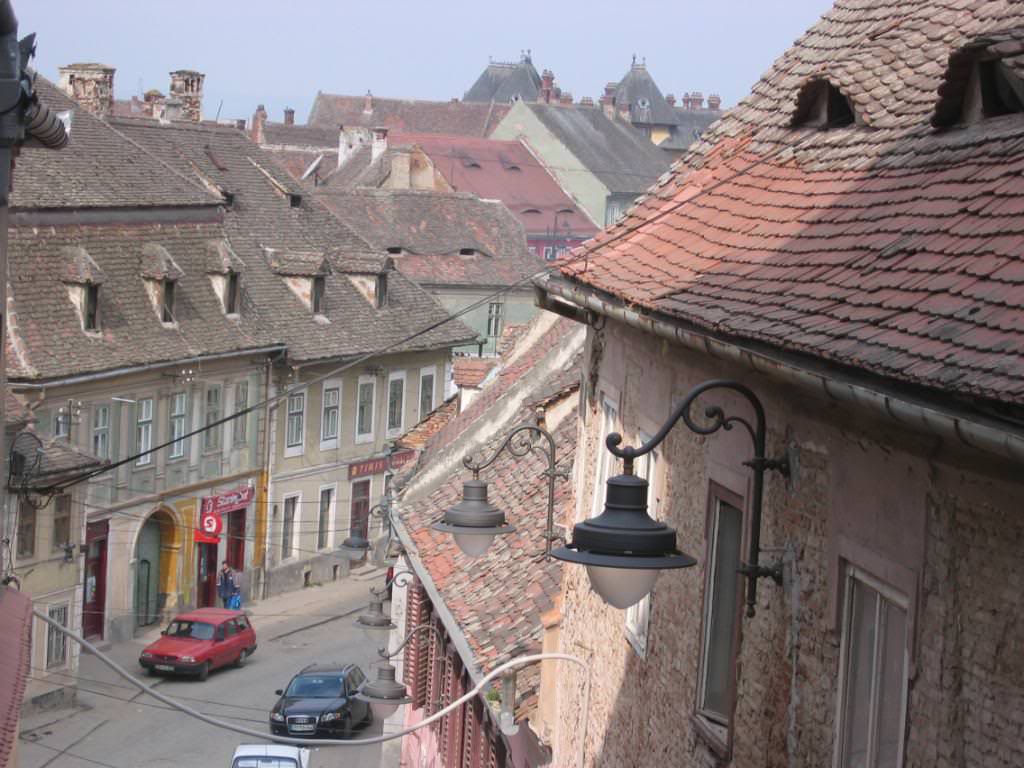 responsible for some of the most spectacular buildings in its city center.

The city was founded in the mid-12th century by settlers thought to have been led by someone called Hermann. It became the most prominent of several cities such settlers established, to help defend what was then the borderland of the Hungarian kingdom. Those settlers are often referred to as Saxons, though they mostly came from further west than modern Germany’s Saxony region. From the 1400s, Sibiu served as the seat for a special assembly –  Universitas Saxorum – representing German speakers in Transylvania. 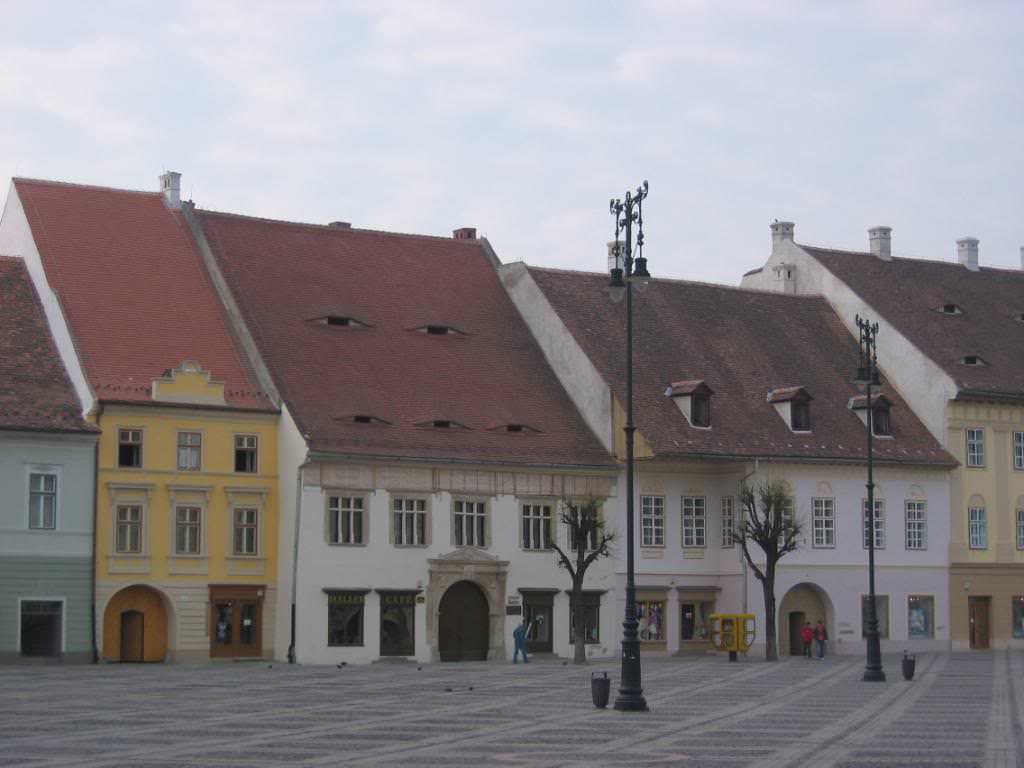 The city still has a lot of houses that remain in their medieval form. Industrious craftsmen and merchants, the settlers constructed steep-roofed houses to allow goods to be stored in the attics. Eye-like windows peeping through the roof tiles are a characteristic Sibiu feature.

But the largest building erected by those early German residents is the yellow-stone, 78-meter-long Gothic cathedral, with a 70-meter spire, standing on the square named Piata Huet. Open 9am-8pm in summer and 10am-3pm in winter, the church of the Virgin Mary was built up to its present form in several stages between 1320 and 1520. The statue of bishop Teutsch of Sibiu (1817 to 1893) that strikes a resolute pose beside the church dates from 1900. 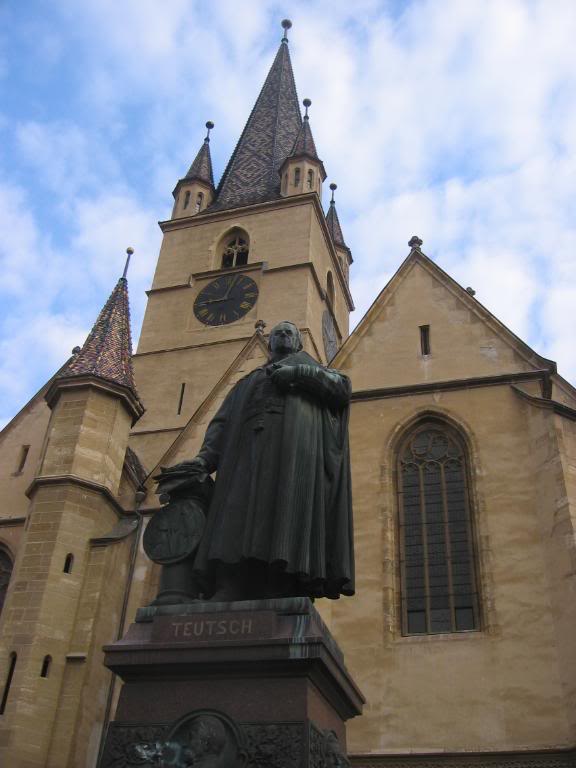 The church started out Roman Catholic, but has been a Lutheran place of worship since Transylvania’s Germans went through their local version of the Reformation in the mid-16th century. Its interior, though gorgeous, bears evidence of the shift toward more austere decor that went along with that doctrinal rethink. For example, the Crucifixion mural on one wall in the choir area, painted by a Transylvanian German in 1445, is the sole remnant of a series of colorful paintings that used to bedeck all the walls. Check out the lively individual faces in the crowd in this beautiful mural, which is influenced by Flemish art of the period.

A striking example of the Reformation’s plaining-down of church decorations can be seen on a 1512 altarpiece that stands in the transept left of the central altar area. Its central element shows Jesus on his cross, but big blue panels with Bible verses block out the areas left and right of the cross base. The panels were added in 1545 to obscure three saints who used to be there. But you can still see Mary Magdalene’s hands hugging the cross at the bottom.

One ornate thing that survived the Reformation is the 1438 font, shaped like a chalice and made by a craftsman from Transylvania. According to legend, the bronze he used came from cannons which Sibiu townsfolk seized the previous year, as they disarmed Turkish warriors who were besieging the city. 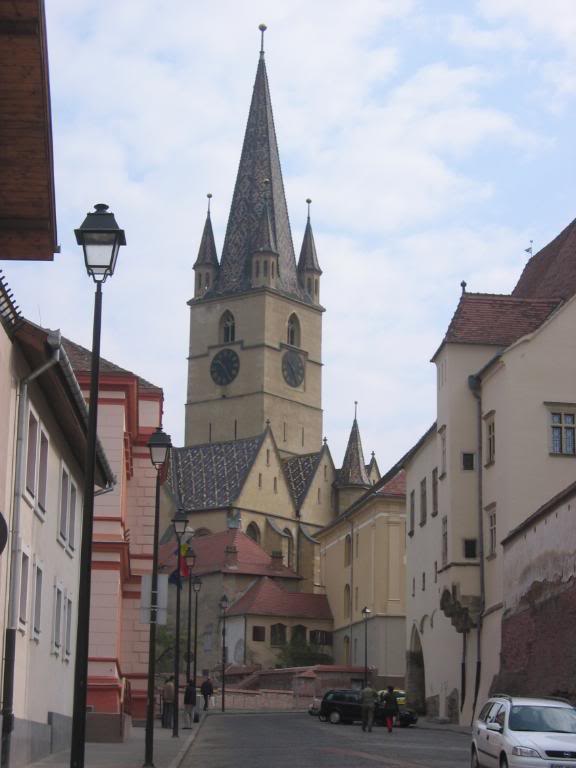 Certain post-Reformation touches in the interior are pretty eye-catching, too. The church has fabulous organ pipes from the 17th century, busy with assorted figures such as angels, a King David plucking his harp, and a couple of rural workers with a bugle and a drum.

Some details of the church’s interior seem to be completely in keeping with the original construction, but in fact are neo-Gothic touches from a restoration in 1853-55. They include the delicately carved altar and pulpit, and the pews, each individually numbered and adorned with vegetal designs that sprout out of their ends.

It’s a reflection of the central role this church played in city life that, beginning in the later 1400s, many local dignitaries were given tombs or epitaphs here when they died. Early examples can be found in the back chapel beyond that organ. This is where you’ll find city judges Huet (who died in 1607) and Haller (1569). Later instances are the four individuals commemorated in vivid, slightly macabre relief epitaphs bursting out of the left wall of the main body of the church. From left to right, these men are Mayor Rosenfeld (died 1770) and city magistrates Frankenstein (1697), Baussnern (1742) and Haupt (1686). The final local official to whom a similar honor was given was Samuel von Brukenthal, whose remains lie at the foot of the pillar near to the pulpit, as a German inscription on that pillar indicates. 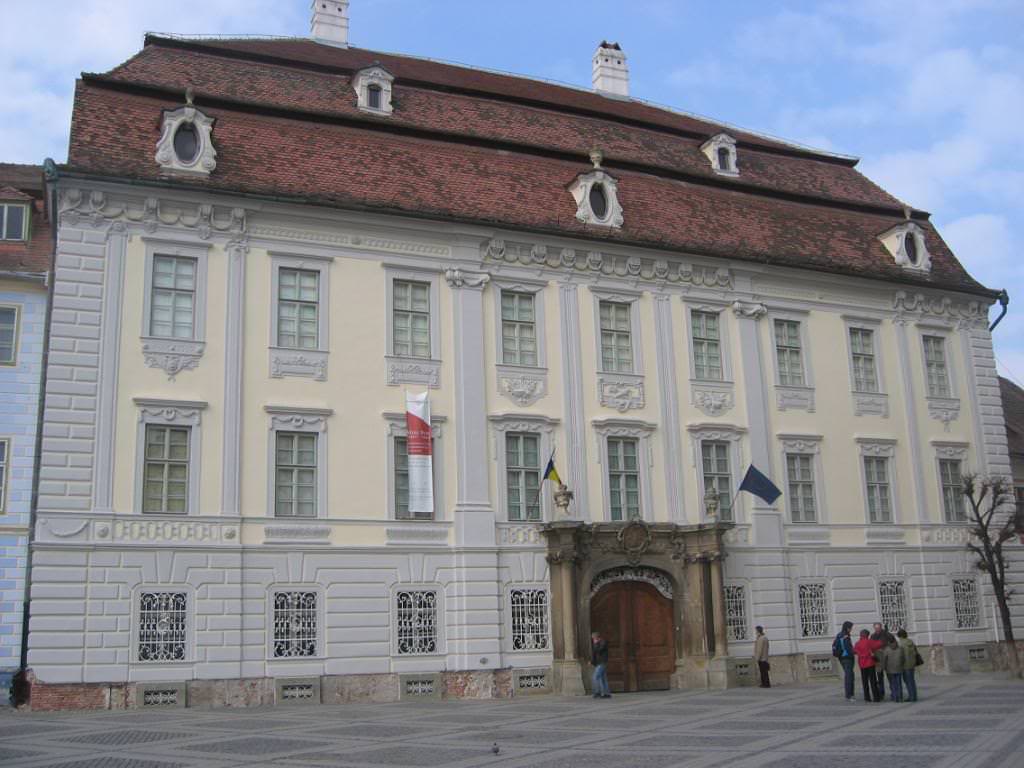 But Brukenthal (who lived 1721-1803) was an altogether different type of dignitary, and that leads us to a different phase in Sibiu history. During several centuries when different great powers tussled over control of Transylvania, Sibiu stood out among the region’s major cities as the one that most strongly supported Austria. And so when the Habsburg Empire held sway over the region – for about two centuries starting in 1691 – Sibiu was the regional capital for almost that whole time.

That prominence is reflected in several grand Baroque-style 18th-century buildings to be found here. A great example is the mansion on the large central square named Piata Mare. Built in 1778-1785, it was inhabited by Brukenthal, a locally-born German speaker who was the Habsburgs’ Transylvanian governor between 1774 and 1787.

Today, his former mansion – known as the Brukenthal Palace – is one of Romania’s most famous art museums, based around 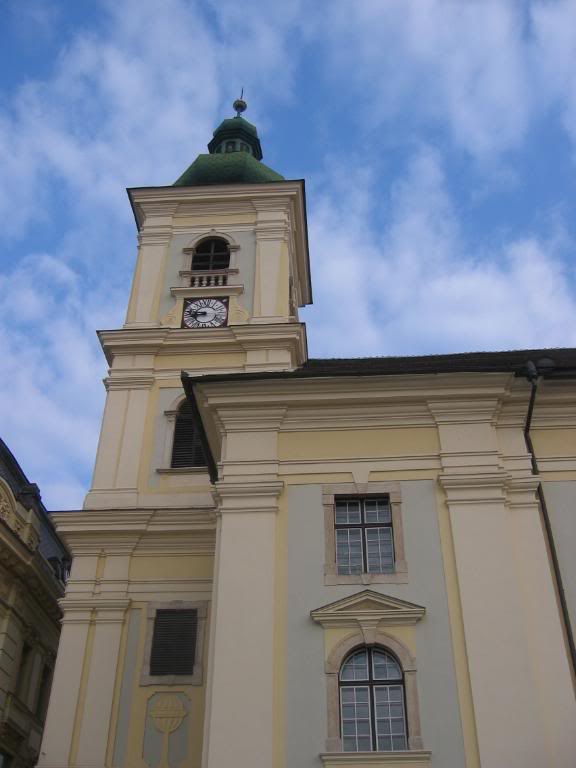 Brukenthal’s private collection. It is open Tuesday through Sunday from 9 to 5. The museum’s collection has grown over the years to encompass some 3,500 paintings, meaning that a mere fraction of them are shown at any time. There are some good German, Flemish and Dutch canvases, although perhaps the most famous artist represented is the Italian master Titian.

It was Brukenthal’s own idea – since he had no children – that his collection should be inherited by the city and turned into a museum for the general public. This was a novel idea in those days, and reflects Brukenthal’s sympathy for the Enlightenment movement. In fact, the museum’s opening in 1790 predated that of the pioneering Louvre, in Paris, by three years.

The fact that the ambitious Brukenthal, a member of the local nobility, managed to get appointed as the Habsburg’s local governor was all the more impressive given that he was a Protestant. The Habsburg dominance in the region went hand-in-hand with a re-seeding of the Roman Catholic faith here. Some of Transylvania’s finest Catholic churches date from those Counter-Reformation days, and a case in point is the large pastel-colored one that stands on Piata Mare.

The Habsburgs had to haggle with Sibiu’s strongly Protestant town council before getting the green light to build this church, even with a fast-swelling Catholic community in the city served by immigrant Jesuit priests. Construction of the church began in 1726, with the inauguration going ahead in 1733. 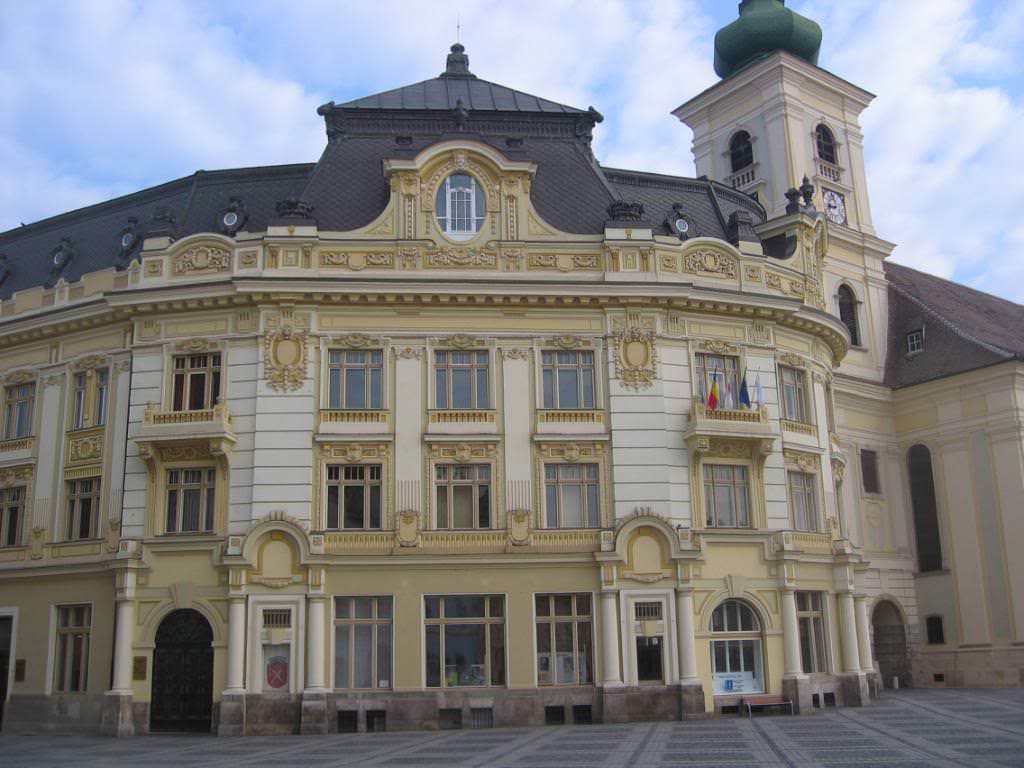 The rich painting that can be seen today on the inside walls was not there during the early years of the church’s existence. The earliest mural here, a Holy Mother image right behind the main altar, was painted by an Austrian artist in the 1770s, and a lot of the other painting was done in 1904 by a Munich artist. The realist-style stained glass windows, meanwhile, came from Budapest in 1901. But some original features are still here, such as the church’s side shrines and Baroque-style confessional boxes. To this day, the Catholic church is well used and cared for, holding services in all three Transylvanian languages – Romanian, German and Hungarian.

These three remarkable buildings all reflect on different aspects of this fascinating city. But the most amazing thing is that they are all within a few minutes’ stroll of each other. A couple of hours is all you need to take in these sights that testify to the centuries-old heritage of Sibiu – or rather, of Hermannstadt.

My wife and I spent a week there in 2012, and we found very safe. People were very friendly, food was great, and everything was very affordable. I would go back in a heartbeat!

How safe is Herrmannstadt? I have been to Bucarest about 15 years ago and it was not safe at all. The women were beautiful and clubbing was really fun. Without a local to dangerous though.

[...] and this city became less politically significant, as the Habsburgs chose to rule the region from Sibiu. They did, however, devote a lot of effort to overhauling the walls of its citadel. Though some [...]

[...] and this city became less politically significant, as the Habsburgs chose to rule the region from Sibiu. They did, however, devote a lot of effort to overhauling the walls of its citadel. Though some [...]

I am happy to see that you're talking about a city that I love as much as I love Prague, Rome and Barcelona. I have spend long time in Sibiu and this made me fall in love with this city, like a poem in the heart of Romania. Its unique charm comes from a mix of Romanian and German traditions, history, amazing sights, great food, immortal legends and beautiful people.