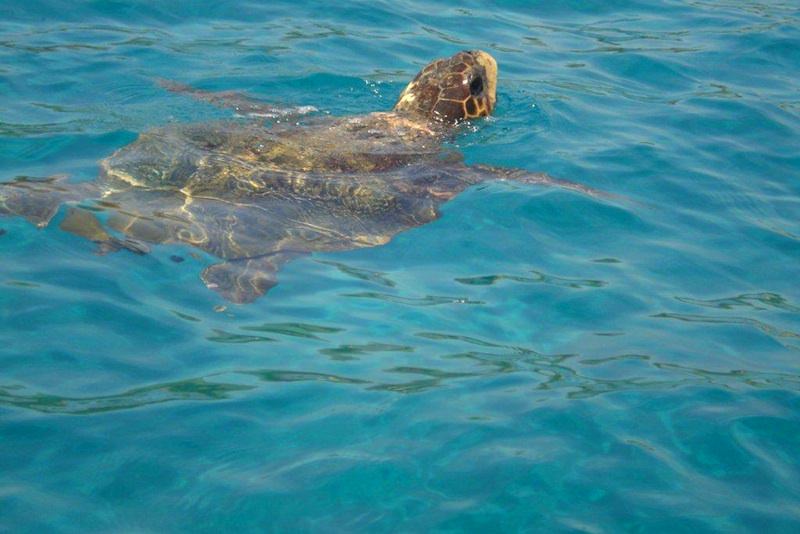 The boat skirts carefully around the turtles before heading toward an off-shore island. Ahead in the high arches below the limestone cliffs are the Keri sea-caves.  Scuba-divers are exploring the cave but make way for our boat to enter. The water is crystal clear, a vivid azure blue because of the sun reflecting off the white pebbles ground beneath the water. Snorkeling and diving is popular here because of the many secret passages between the caves, going deep into the mountains. These caves are the habitat of the Mediterranean monk seal, also an endangered species. 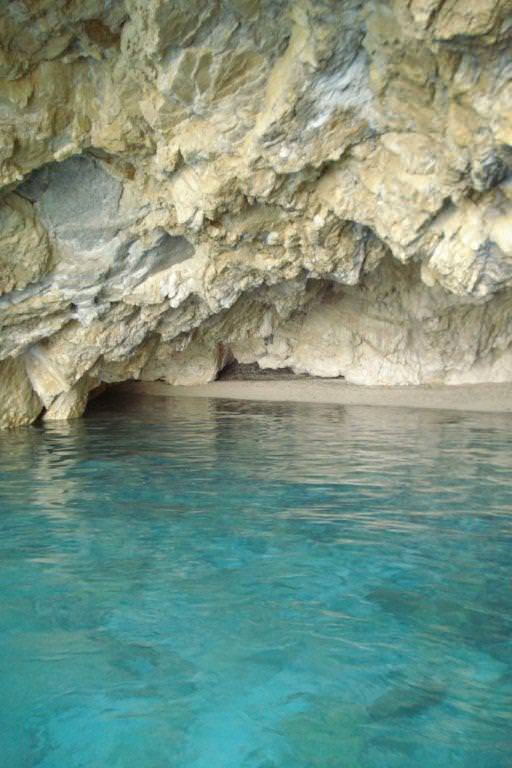 Inside the Keri Sea Cave

The boat sails out into the shimmering blue bay. Through the glass bottom I can see right to the sea bed through the crystal clear water and watch small fish dart by.Suddenly the captain calls: “Look out there, to the right!” 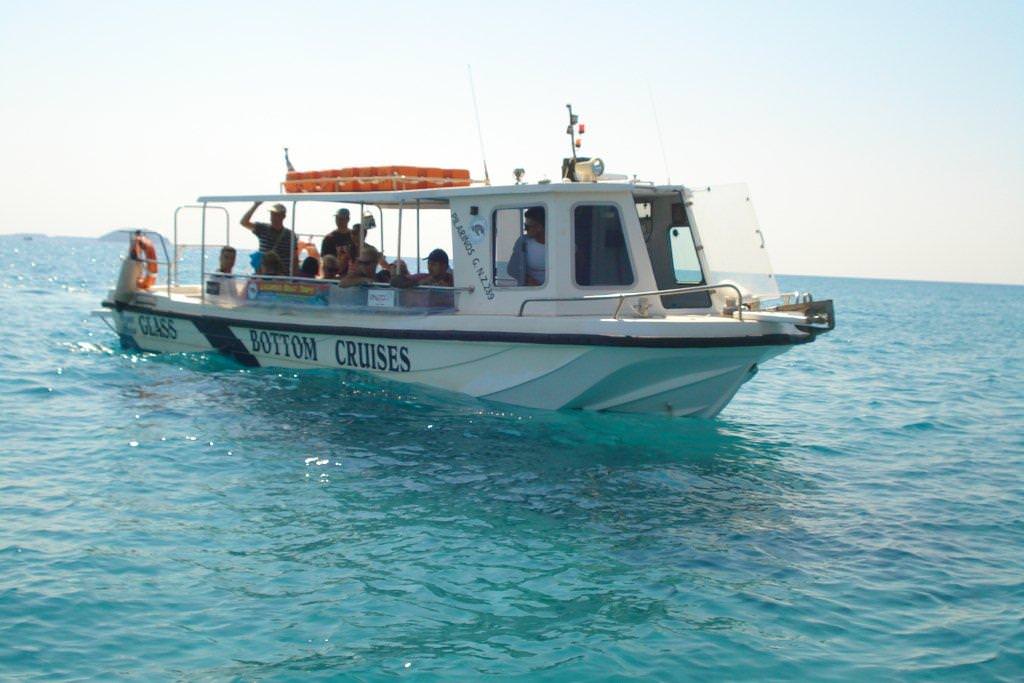 He points to a dark shape surfacing and then a head pokes up taking in air before diving down again. “Now look down,” the captain says.  And through the glass bottom I see a huge brown shape swim by: a loggerhead sea turtle (caretta caretta). These giant marine reptiles are an endangered species. During the months of June, July and August the turtles migrate to the Bay of Laganas on Zakynthos island to lay their eggs on the beach. I have come here specifically to see these amazing creatures.

Soon we spot another surfacing then diving again to swim under the boat.

We circle the bay and spot a total of five loggerheads.

Then we round an island and anchor on a sandy stretch of beach. This is Marathonissi, “Turtle Island”, the place where the Caretta Carettas lay their eggs. There are signs along the beach warning people to stay away from the protected nesting areas. The females come ashore briefly to lay their eggs. Young females lay an average of four egg clutches of up to 120 eggs total and then will not lay again for two or three years. Unfortunately when the eggs hatch, the young turtles are prey for numerous predators so very few survive. Adult loggerheads often get caught in fishing trawls so now they are protected by the International Union for the Conservation of Nature. 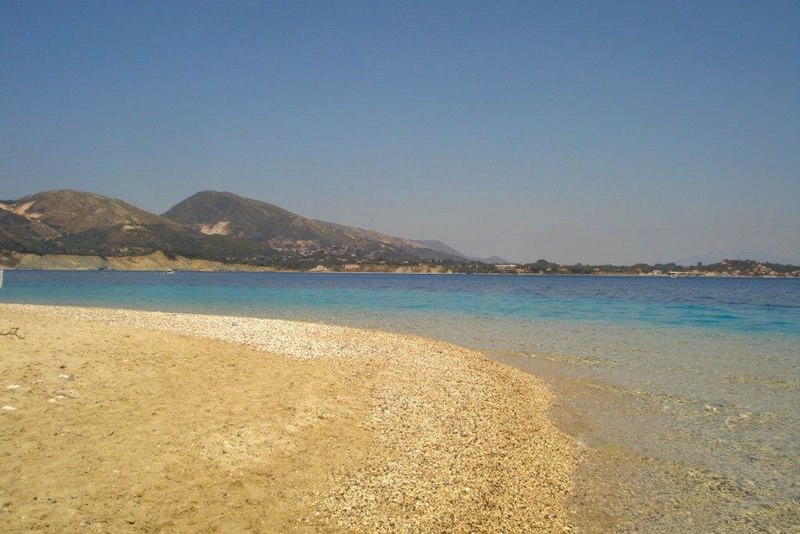 This is a protected beach watched over by ecologists. We are allowed to spend an hour to swim there but must not stray past the warning signs where turtle eggs may be buried in the sand.

Turtle watching tours as well as tours to the Keri Caves and Shipwreck Beach are available from various places along the main beach of Laganas.  Laganas is a busy resort, popular with young people.  The seven kilometer stretch of sandy beach is lined with tavernas and clubs, some with Russian names (and you’ll find Russian language on all menus). A well-known resort area for Brits arriving on cheap flights from London, it is now a popular vacation spot for Eastern Europeans. The west end of the beach is noisy and crowded. Disco music blares from the clubs and tavernas all hours of the day. Fortunately, my hotel was located at the quieter eastern end, a fifteen minute walk from the main town area. 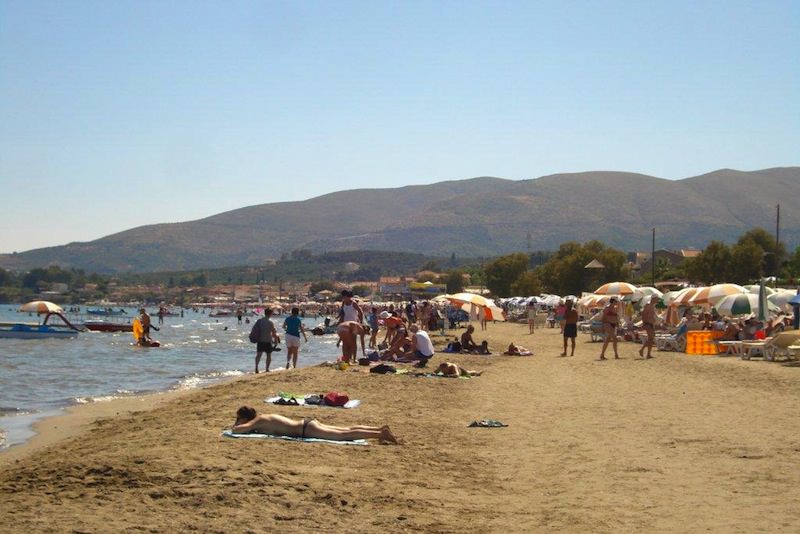 The water there is shallow and excellent for families with small children. My hotel Andreolas Beach Hotel  is right on the beach and has a beautiful patio and swimming pool area as well as providing beach chairs for guests.

The four days I spent in Laganas I took advantage of the little Fun Train tours as well as the boat cruise to see the turtles.  One tour took me through an ancient olive grove to an olive press plant, the Aristeon Olive Press Museum, where the process of making olive oil was explained.  There was an oil-tasting table so you could sample the various varieties of olive oil. I bought a tin of oil made with bitter orange. 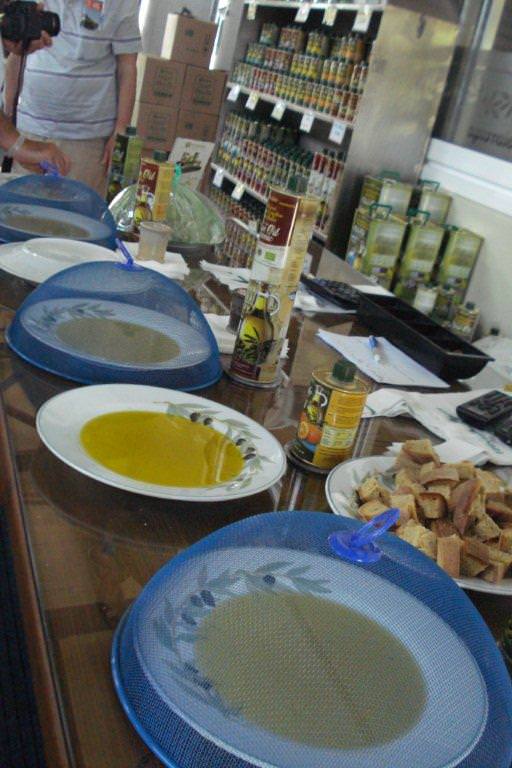 Another Fun Train trip went into Zante town where I had two hours to browse around and stop for dinner at a port-side taverna.  There are various other tours you can take from Laganas.

Although seeing the Caretta Carettas was the highlight of my visit to Zakynthos, I enjoyed my visit at Laganas, though next trip I might choose a quieter location to spend some lazy time on one of the island’s many gorgeous beaches.