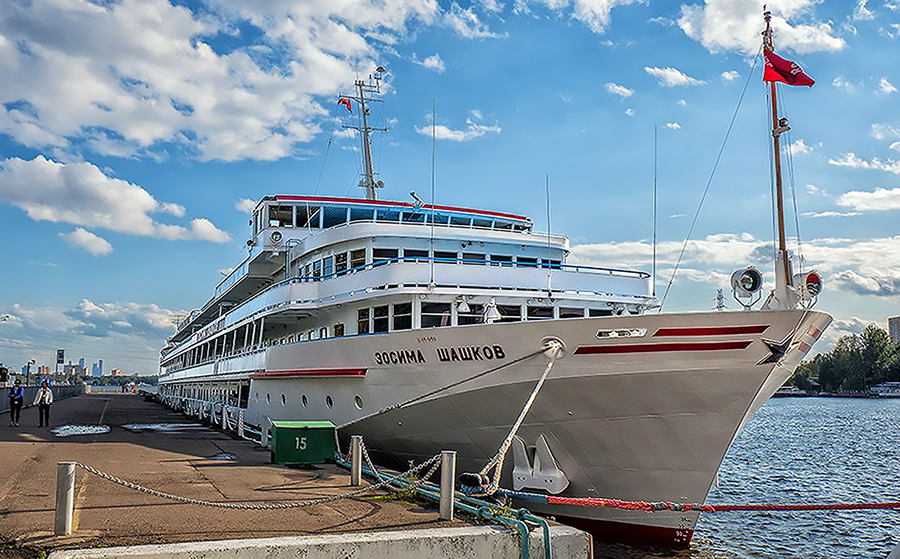 My adventure in Russia in 2017 began many decades ago as I began to read about Peter the Great, the famed tsar of All the Russias in the 1600s, and Catherine the Great, a century later. Their autocratic rules and visions for their vast empire captivated me. As I read more about them, I knew by 1980 that a visit to St. Petersburg must top my A-list.

I found a Russian river cruise line that sailed from Moscow to St. Petersburg spending a few days in both cities and jumped at the opportunity to visit more of Russia. I prefer river cruising with a local cruise line rather than on a luxurious ship that is western European in cuisine and accommodations, as well expensive, so I chose the Vodohod Cruise Line.

Their 3-star, Zosima Shashkov carries 298 passengers (more than I like) for a reasonable price and low single supplements. She has ten single cabins and was updated in 2013.

My arranged transfer from the airport introduced me to Moscow’s traffic and heat, but embarkation was efficient.

My single cabin (left) on the top deck near the bow was small but comfortable. Its advantages were the high outlook and proximity to the wireless router in the bar — I had the internet most of the twelve days and few other passengers did. Beer was cheap onboard, but I learned to give Russian champagne and wine a miss.

The river cruise port on the Moscow River is an hour or more by road from the heart of Moscow and I was up early on day two to get a good seat for the city tour.

Moscow is a modern city but overflowing with historic buildings echoing its Imperial past, Stalin’s regime, and later perestroika.

First up were the obligatory visits to GUM, Red Square, and St Basil’s Cathedral, which was free time. Through mid-September, the sites were seething with tourists in large groups with their guides.

GUM, the famous department store, was impressive with all the major up-market stores like Armani, Prada, and Gucci on three levels of three interconnected malls.

Red (meaning beautiful in Russian) Square was outside GUM and smaller than I imagined. Taken through GUM’s entrance, Lenin’s Tomb is opposite.

My first glimpse of St Basil’s, now a museum, was from the back and took my breath away. This shot is the front from outside GUM and fails to show the crowds that are corralled by barriers in and around Red Square.

Traffic means gridlock in Moscow and impeded us in every direction. We toured the Kremlin after lunch with a local guide. It lies adjacent to Red Square and contains five palaces, four cathedrals, gardens, and government offices behind the walls.

Outside the Kremlin walls with the Moscow River to the left. Kremlin means a fortified complex within a city or town, and there are seven others in Russia.

The Annunciation Cathedral was built in 1489, remodeled a century later, and reserved for the use of the Imperial families. Across Cathedral Square is a bigger church open to the public — the Cathedral of the Archangel Michael — where all the Muscovite tsars are interred (pre-Peter the Great). Coronations were held in yet another cathedral in the square. Inside all, the walls and columns are painted with religious scenes. [

One of the modern buildings within the Kremlin — the State Kremlin Palace, aka the Palace of Congresses — was ordered by Khrushchev for communist conventions. Today it is a concert hall and event venue. It looks odd amid the historic buildings.

Next day, still alongside in Moscow, gave us a choice of excursions, some included and others optional for an additional fee.

Declared a UN World Heritage Site in 2004, the ancient Novodevichy Convent complex is surrounded by high walls. Its title is the Convent of the Virgins, which is a misnomer because divorced Tsarinas were banished here centuries ago. In 1994, nuns returned after the Soviet era, and today a few nuns still choose to enter (top). We visited the small Cathedral of Our Lady of Smolensk (bottom), which was empty but for icons and much gold, and their excellent museum.

The vast Novodevichy Cemetery lies adjacent to the convent and is the largest in Russia. All the major political and art-world greats are buried here, including Yeltsin, Chekov, and Prokofiev, for example. This long tour followed the history of the nation, and if you know something of it, it added to the fascination.

The beautiful grave of the prima ballerina, Ulanova

The grave of Nikita Khrushchev, the first president of the Soviet regime. The design, typical of the era, represents power and domination.

Everyone slept on the drive back to the ship for a very late lunch and many had a post-prandial nap too!

Near sunset, we sailed north up the Moscow Canal heading to St. Petersburg via the Baltic-Volga Waterway, which was built as the main highway for transportation of oil, lumber, and gravel.

The map showing the 1056 mile (1700 km) river-route from Moscow to St. Petersburg. The voyage took us through the mostly flat countryside with occasional towns and villages on the banks.

All that’s left of the drowned village of Kalyazin.

One of many bulk carriers on the waterway.

We crossed paths with one of our sister ships sailing south to Moscow amid much sounding of sirens.

A statue of Lady Volga marks the northern entrance to the Volga River at Rybinsk.

One of twenty-six locks that we happened to enter in daylight caused excitement for many passengers who had never experienced one before. This one near Uglich is small by comparison with others.

Life onboard was filled with the typical things to do and see. Passengers had many choices of activities, movies and presentations, and parties. Weather varied from hot in Moscow to cold in St.P; sunny to pouring; calm to windy. Shore excursions were offered every day and most of the sailing took place overnight. With my cabin in the bow, I couldn’t hear the engines or locking — a big advantage.

I often enjoyed watching Russia slide by my window.

And especially visiting the modern bridge with the captain.

Food was plentiful and well cooked, but not gourmet. We had a buffet for breakfast and three choices for most lunch and dinner courses. Many of the dining room stewards had poor English skills. The formal Pirates’ Dinner was a highlight with much hilarity and Russian cuisine.  [IMAGE: Main dining room (©Vodohod)]

I found it challenging to make friends onboard because all but me and four other passengers were on major tours and knew their fellow travelers. Everyone was friendly enough but did not include me in their plans ashore or onboard.

Our ports of call on our Russian river cruise included Uglich, Yaroslav, Goritsy, Vytegra, and Mandrogi. All the local guides were superb, and we had receivers with earphones so we could hear them well at a distance and outside. The images below show a little of the places we visited.

Church of St. Dimitry of the Blood in Uglich on the Volga, after a torrential rainstorm. It became a place of pilgrimage after the Romanov tsars canonized a martyred tsaravitch of the previous Rurik dynasty here.

Yaroslav is a charming city on the Upper Volga settled in 1007 and where the international textile trade built its wealth in the 1600s. We spent four hours exploring the historical center, a  UN World Heritage site, seeing a few of the many churches, the embankment, and city square. The 18th-century architecture is considered the finest in Russia, which was made possible by Catherine the Great’s urban planning reforms. The visit ended with a superb tour of the beautiful Governor’s Residence.

Churches that date from the 1500-1600s are lavishly painted inside and frescoes cover every square inch. This church in Yaroslav is a fine example.

The Governor’s Residence is now a museum featuring Russian art from 16th to the 19th century. The tours of the restored mansion are given by the governor’s “daughters,” seen here in the Main Hall where balls were held.

At Goritsy, about halfway to St.P., the wooden village homes were much as they have been for a century, some well-kept and others neglected. We drove to a famous fortified monastery that protected Moscow’s northern territory.

A typical home in the northern Russian village of Goritsy.

The entrance to the Kirillov-Berlozersk (St. Cyril-White Lake) monastery that is now a museum within the fort. Ivan the Terrible had his own cell here, and in its heyday in the mid-1700s the order was rich, owning 20,000 serfs, 400 villages, and a salt mine. Beautifully restored, we saw artifacts of Russian life, their crafts, and sacred paintings.

Outside the walls and bastions of the monastery on the banks of White Lake where the rain held off for our visit.

Sadly we did not reach our next port of call, the island of Kizhi due to an emergency, something that can happen on any cruise. A disappointment to me because it would have been a highlight. Instead, we sailed to Vytegra at the southern end of Lake Onega.

Here I found a Russian Foxtrot submarine far from any ocean. The tour onboard was of great interest to me, an author of Canadian submarine history, but most chose to see the town.

It poured as we came alongside in Mandrogi, a small village between Lake Onega and Ladoga that was flattened in WW2 and restored in the 1960s.

I waited until the rain eased up and spent my time in the artisans’ workshops in this old mansion. The community looked run-down and contrived to me except for a new covered area.

During a lunchtime barbeque, thankfully under this roof, Russian musicians entertained us before we embarked for the long sail to St. Petersburg.

That night my tablemates and I discussed the Russian river cruise so far and we came to the conclusion that we’d seen enough Russian Orthodox churches to last a lifetime, the local guides had been exceptional, and the countryside was boring. I remarked that most of the history we’d heard to date was pre-Peter the Great, so I was keen to learn more about him in the city he founded. Later we agreed that the cruise was mostly well organized but hectic.

After a voyage of 1056 miles (1700 km), we docked in St. Petersburg at 8 am for our first of three full days in the city. I had been waiting most of my life for this destination, and the legacy of Peter the Great and St. Petersburg exceeded my wildest expectations. Discover more about my Russian river cruise in Part Two.

My Very Russian River Cruise – Part I was written by © Julie H. Ferguson 2017

ALL IMAGES: © Photos by Pharos 2017, except where noted on images.

Good to Know Before Booking Your Own Russian River Cruise:

Jen, I hope you can go to Russia one day.

Ele, I'm glad you now know about Vodohod Cruise Line. They do have 5-star ships, but still at a more reasonable price. I was more interested in the shore excursions and the sights than having a butler and haute cuisine!! That's not to say that I don't love luxury but I think many river cruise lines are over-priced. Here's hoping you try Vodohod. Bon voyage! Julie

It was interesting to know that there are options to the absurdly priced river cruises (I mean, a week starts at 3,000 euros and they don't have single rooms!). I will have to research more of local cruises and maybe I can afford one, too.