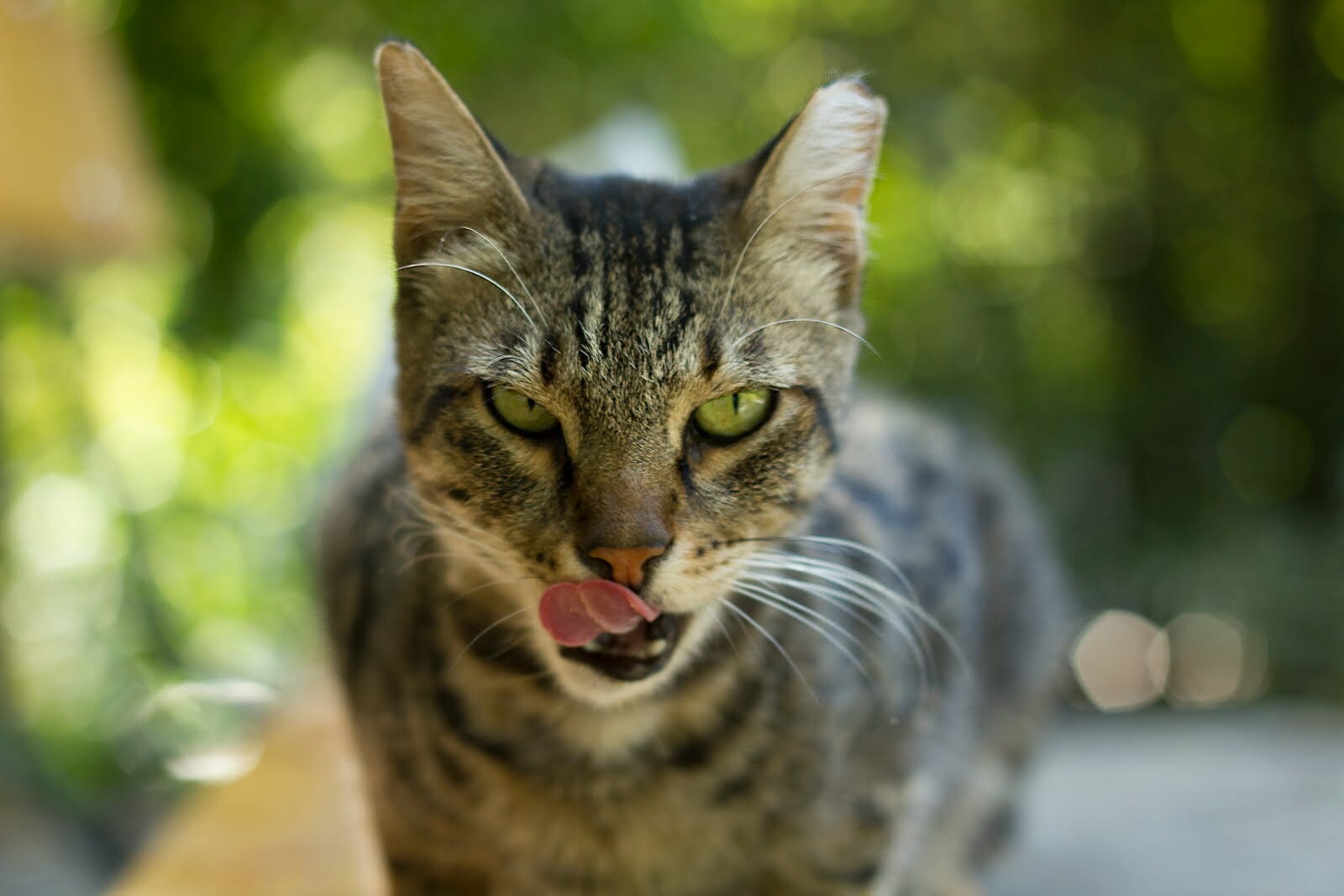 Rescuing the Cats of Athens

They haunt the ancient temples of the Acropolis like lean ghosts. They scavenge through piles of plastic garbage bags in the narrow streets of the Plaka. Their tormented yowls and chilling screams are the night music of suburban alleys. They are the cats of Athens. It is impossible to estimate the numbers of them. They roam as free and wild as their ancestors in the jungle of the city.

Their main purpose seems to be keeping down the rodent populations, and it is certain that no rat would venture forth into an Athens alley and risk competing with these wild colonies of strays. They hunt along the Sacred Way of the ancient warriors and bask in the sunshine where the gods once lived. They are primitive hunters who can catch a bird in flight or will fight to the finish over a scrap of food. Even the dogs stay away from them. 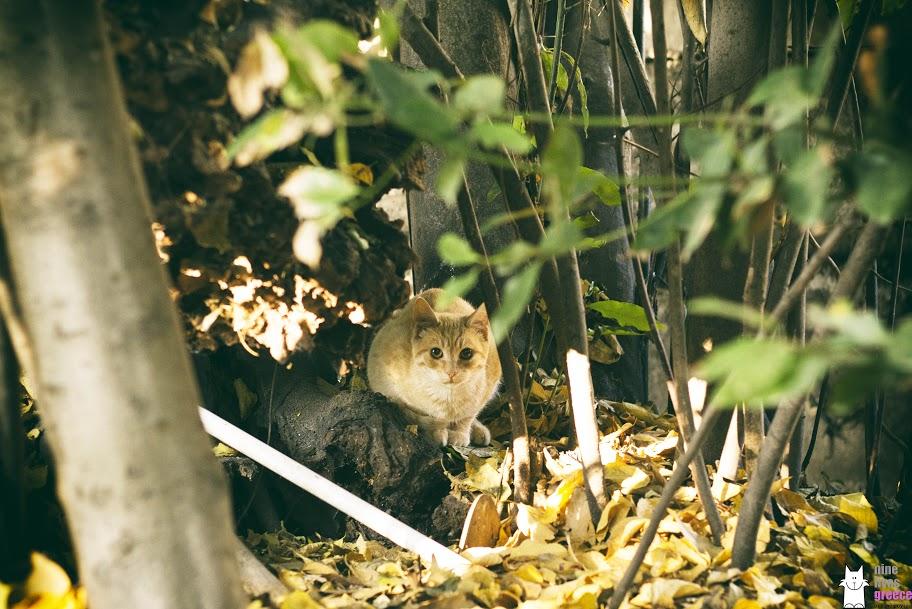 Many of the cats in Athen’s parks and those who roam the parks of Athens have been abandoned by former owners. But most of Athens’ cats live out their lives never knowing a human’s touch, never experiencing the comfort of a soft lap or the warm hug of a little child.

It’s not unusual to see people put out food scraps into the gutters or in the vacant lots where the cats of Athens roam. The most fortunate lurk around the stalls of the Athinas Street fish market. Others wait hopefully at the doors of tavernas, often crouching under the tables or yowling beside the chairs, twining around the table legs and ankles of hungry tourists, hoping for a few tidbits. Some more fortunate felines have been adopted by shopkeepers and kind locals. These lucky felines laze on window ledges or groom themselves in sunlit doorways, stretched out on the warm paving stones among the flower pots. 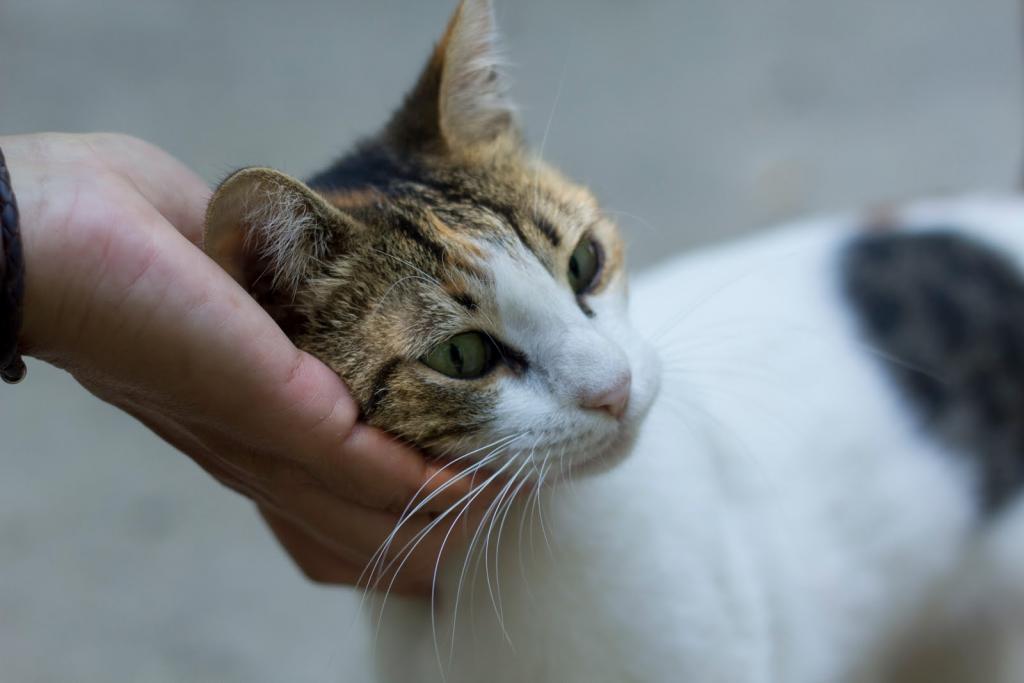 They say that cats have nine lives, and to make sure of this, the Nine Lives Organization of Athens has stepped up to make sure these stray cats of Athens have adequate food and veterinary care. Some of the lucky ones are also found caring humans who welcome them to their homes.

Nine Lives Greece is a registered Greek charity which is made up of about 60 dedicated volunteers who do what they can to help these stray felines. Their aim is to rescue as many cats as they can, tend to the street cats and find homes for them. They are constantly struggling to find foster homes where cats or kittens that simply cannot survive on the streets can stay until adopted. Kittens and very old cats have no survival skills and need care. 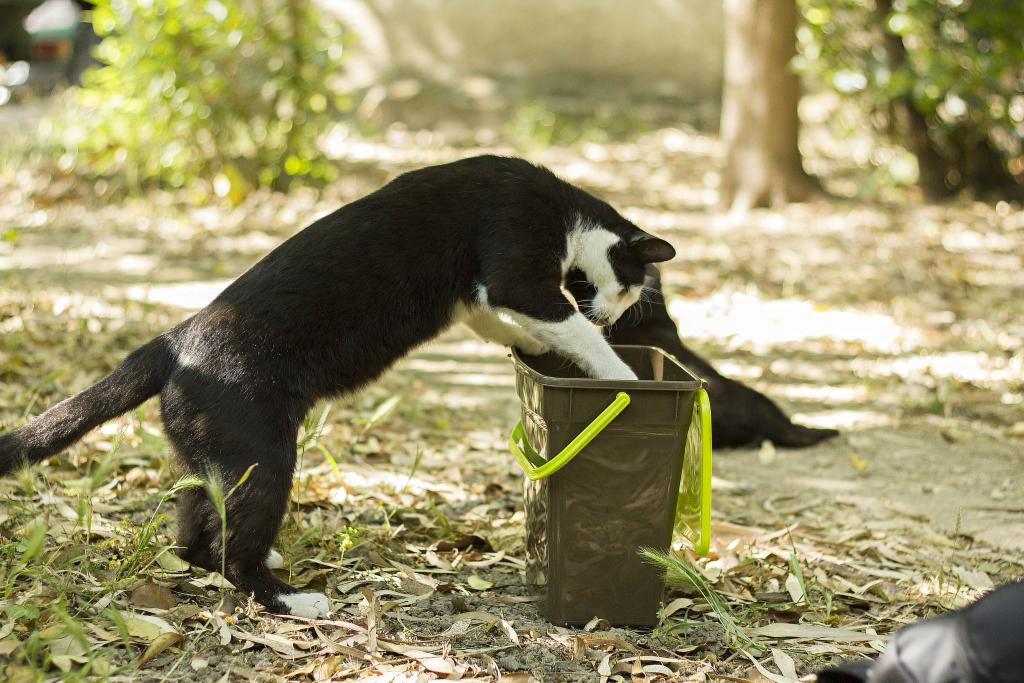 The organization is not funded by the government and relies on the donations of pet lovers to help make a difference in the stray’s lives. They make regular trips to locations around Athens, especially the National Gardens, to feed the strays and see that they are cared for. In 2016 alone they neutered and spayed over 1500 cats as well as providing daily food and veterinary care for some 450 street cats.

I attended one of the Nine Lives fund raising bazaars while visiting Athens and spoke to Cordelia Madden-Kanellopoulou, co-founder of Nine Lives Greece.

“We founded Nine Lives Greece in 2006 and it became a registered charity in 2008. We started it because there was a lack of any other charity in Athens specifically working to help the countless street cats. 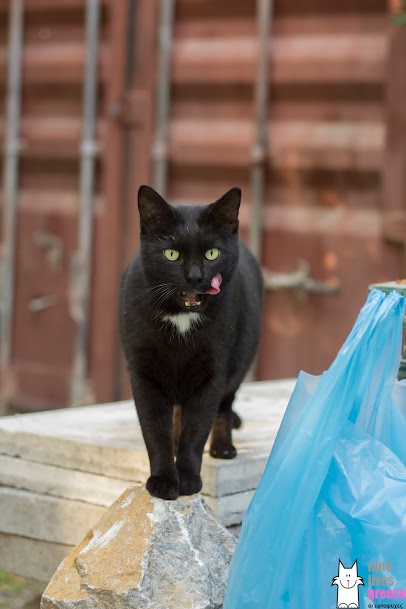 “We feed over 450 cats in colonies in Central Athens every day,” she said. “All of these cats are spayed/neutered. Cats that need vet care are hospitalized at the vet clinics. We do home checks and interviews before adoption. Over 1,500 strays were spayed/neutered in 2016 and responsible homes were found for 120 cats and kittens.”

She explained that if the adopter lives abroad, Nine Lives does skype or Face Time calls as well as interviewing prospective adopters over the phone or email.

“We have several overseas home-checkers too,” she said. “Anyone adopting a cat through Nine Lives Greece signs an adoption contract agreeing to various terms and conditions to safeguard the cat’s welfare and well-being.”

Meet the Cats of Athens

The cats of Athens have their own stories. Olivia, a tortoise-shell grand dame who was abandoned in the parks of Athens, found a comfortable home with a friend of Nine Lives and lived out the rest of her life being loved and pampered until she died of old age and was laid to rest in the National Cemetery.

Cordelia tells the story of Batman and Robin, two kittens found dragging themselves through the streets with wounded forelegs. A caring foster mom took both kittens home and though the kittens had to have their legs amputated she nursed them and cared for them until they were offered a home in rural Scotland where they matured into healthy strong members of a loving family. 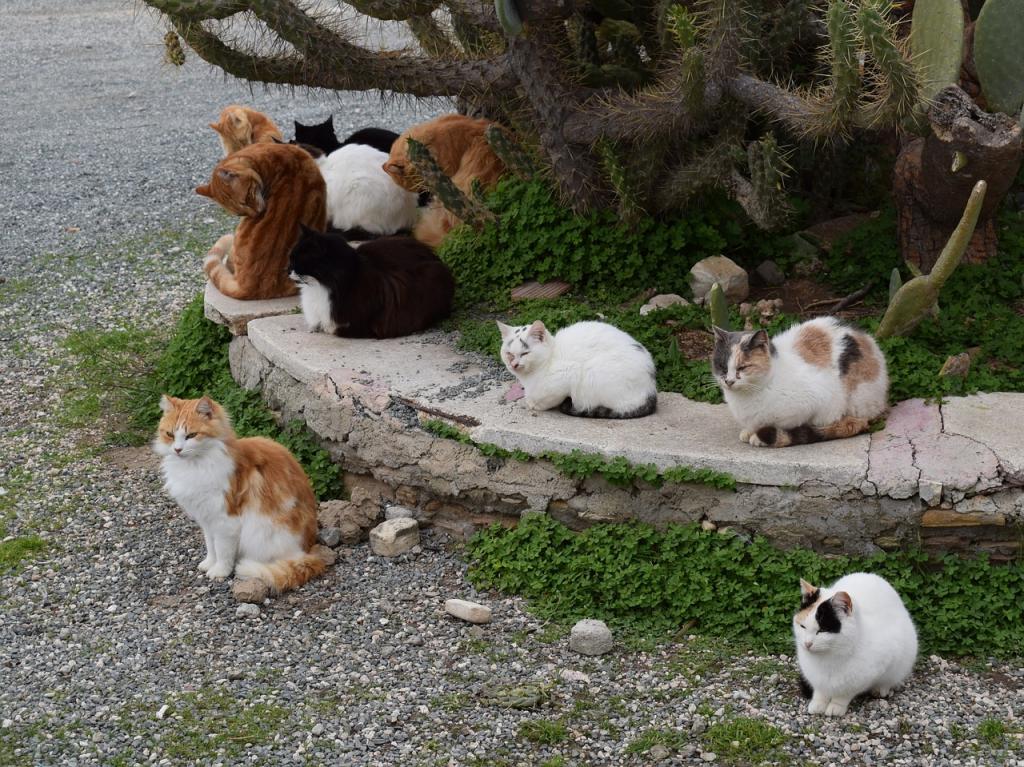 Bo, a seemingly blind ginger and white kitten found near the Acropolis, led one of the cat rescue workers to a colony of 40 other unsterilized cats. Since then most of these cats have been spayed/neutered while little Bo was treated for inverted eyelashes and found a loving foster home.

If you’re visiting Athens, watch for fundraising events put on by the organization. And if you can, donate some of your time and money to their cause of rescuing the city’s many strays. As you walk along the cobbled streets of Athens if a black cat should cross our path, remember that it might be the descendent of one who once crossed the path of Socrates. 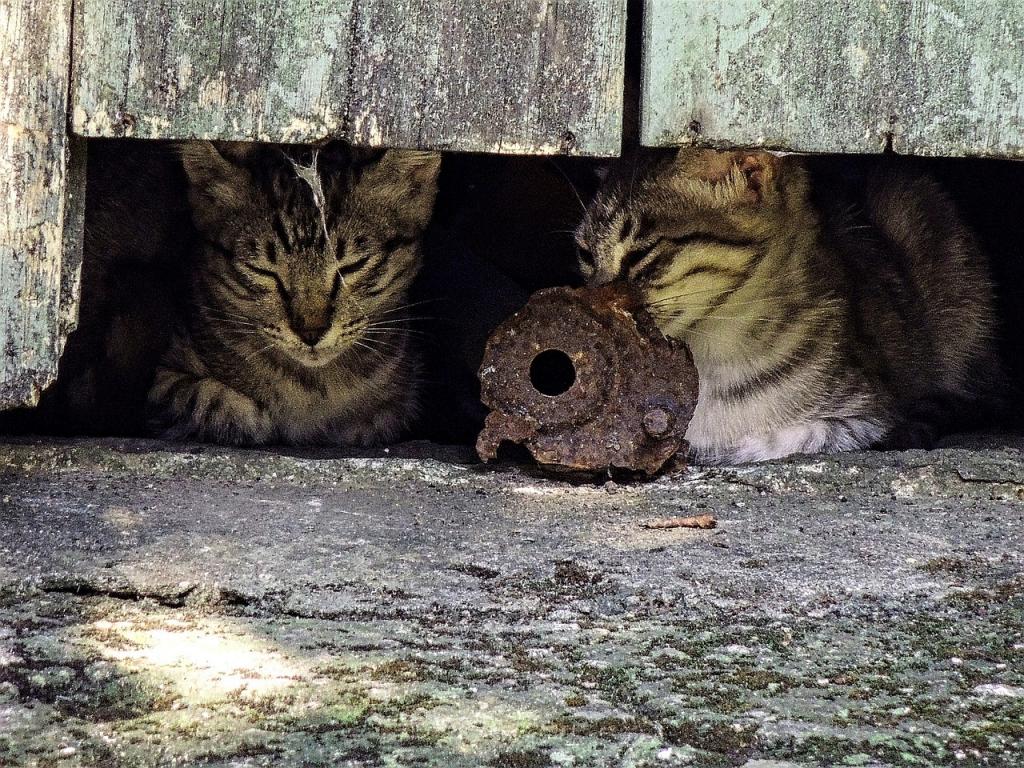 For further information on Nine Lives Greece and how to donate to the organization, check out their website at www.ninelivesgreece.com  or email at: ninelivesgreece@gmail.com

Written by W. Ruth Kozak and photos by Nine Lives Greece for EuropeUpClose.com.

Rescuing the Cats of Athens – Pin for later: 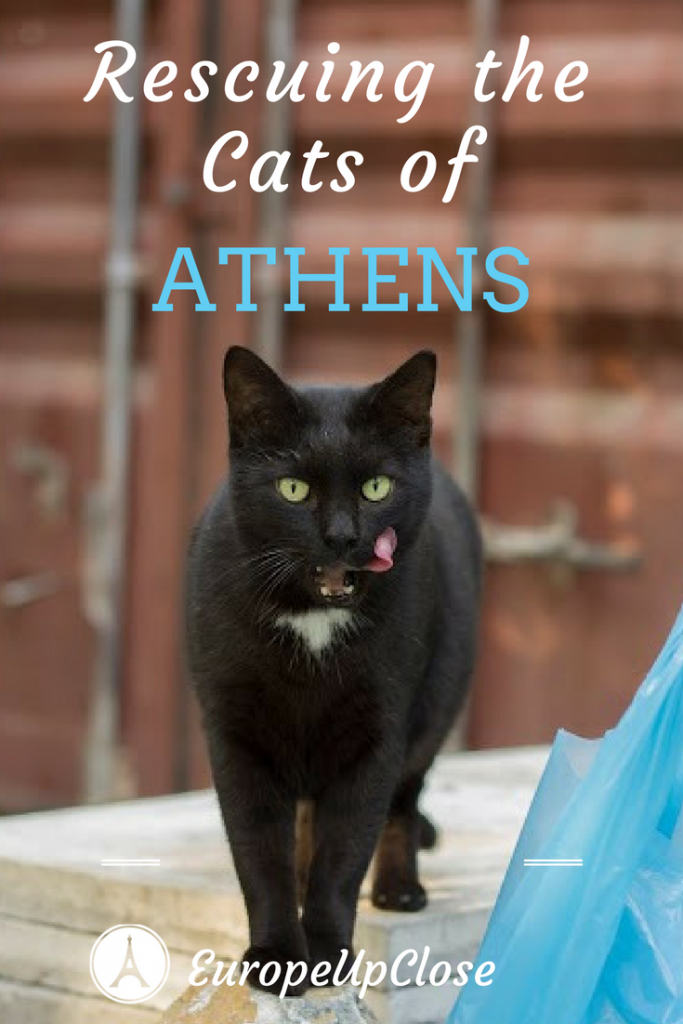