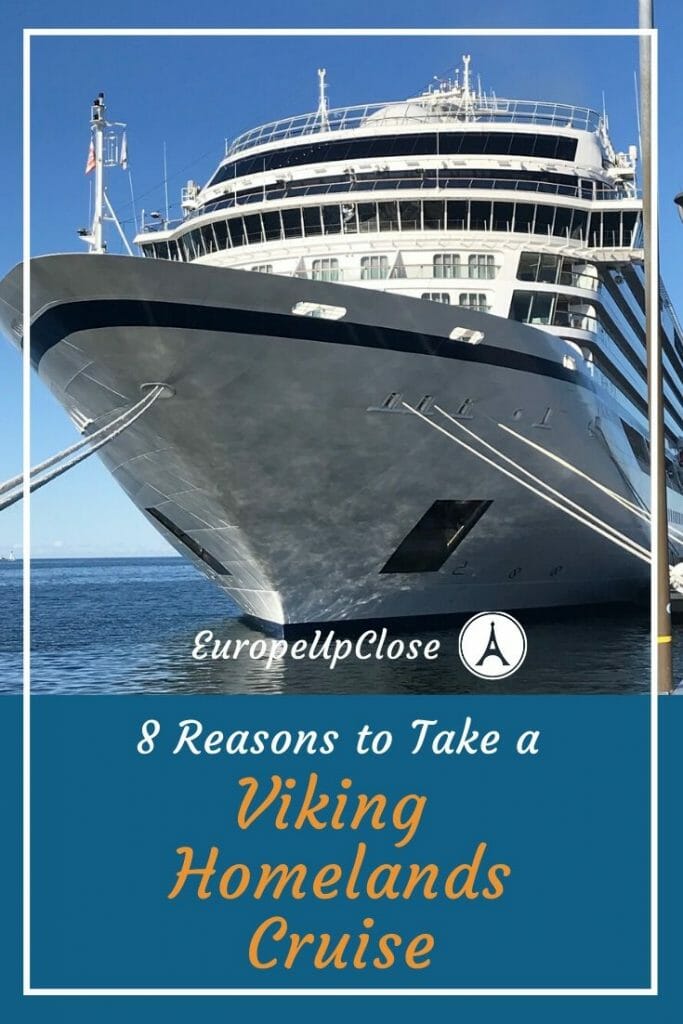 8 Reasons to do a ‘Viking Homelands’ Cruise

It’s easy to think of Vikings for what they’re known for as opposed to where they sailed. Yes, they did raid communities, but they also participated in trade. Their fine shipbuilding skills are also familiar. They ventured along The Baltic Sea, aligned by present-day countries including Denmark, Finland, Estonia, Germany, Russia, and Poland.

However, presently this Viking legacy is being retraced by a Viking of a different kind, a cruise ship company. Viking’s “Viking Homelands Cruise” goes along the Baltic Sea, stopping at eight ports within Scandinavia, the Russian Federation, and Northern Europe. As a result, you get to explore cultures, histories, and cuisines.

Viking Jupiter, a Viking ship launched in February 2019, carries out the 15-daylong “Viking Homelands” itinerary. It all starts with casting off in Stockholm and disembarking in Bergen. You can book your Viking Ocean Cruise here.

Here are eight reasons for taking this particular Viking cruise.

With 465 staterooms that can host 930 guests, the nine-deck level Viking Jupiter has modern Scandinavian design elements. Interior touches have inspiration from the time of the Vikings, with reproduced Bayeux Tapestry stairwell furnishings and Viking-related artifacts on display.

On Deck 1, The Viking Living Room is where passengers can unwind. In other words, you can order a drink and light snack at a clinker-built bar inspired by ancient longships. On Deck 7, after the main pool, The Wintergarden is a model of Yggdrasil. It’s an Old Norse folkloric tale meaning “tree of life.” It’s reflected in a canopy forest setting perfect for a daily afternoon tea service that takes place here.

Also on Deck 7, Mamsen’s is a casual gourmet deli for Norwegian cuisine, with smoked salmon, open-faced sandwiches, and a heart-shaped waffle. The recipe originates from Viking founder Torstein Hagen’s mother, who, to him, is Mamsen. The deli is named for her; plates replicate her dishware pattern. The adjacent Explorers’ Lounge is a cocktail setting. It’s for sitting near a faux fireplace and curling up on couches with fur-lined throws.

Dining onboard Viking Homelands cruise reflects intercontinental flavors. Along with Deck 7’s Mamsen’s, The Pool Grill prepares hamburgers and other casual meals; World Café serves up a global range of cuisine with breakfast and dinner buffet-style servings, and Aquavit Terrace has alfresco dining.

On Deck 2, The Restaurant ties to a port destination’s gastronomy with native dishes and locally-sourced ingredients. In-room dining is available 24 hours (I got the mac and cheese at midnight and it came.).

On Deck 1, Manfredi’s Italian Restaurant is all about quintessential Italian cuisine. Appetizers, anti-pastas, and entrees including pasta, meats, and vegetarian choices are amazing. There’s even a fish of the day and an incredible breadbasket.

Its neighboring The Chefs Table precisely curates food and wine pairings tied to a destination. An “Asian Panorama” menu reflected the continent’s diverse gastronomy; dishes ranged from a king crab amuse bouche, to Peking Duck. Dessert can be anything from a trio of yuzu Crème Brulee to a green tea cheesecake to a chocolate banana spring roll. In addition, another dinner was about traditional Mexican dishes. This includes a prickly pear (nopal) granita, a short rib with a mole sauce, and a trifecta of chocolate desserts.

“The Kitchen Table” is an onboard cooking school. The ship’s Executive Chef takes guests to local markets to pick ingredients that they will use in helping to prepare an evening meal.

The Spa Is Nordic Too

The Nordic experience on Viking Jupiter also encompasses holistic wellness. On Deck 1, alongside a fitness center and hair salon, LivNordic Spa & Fitness everything to pamper you. It has cold and hot plunge pools and facials, massages and body treatments incorporating Scandinavian ingredients or techniques.

A Nordic Bathing Ritual lets you partake in this traditional Scandinavian hot and cold method for improving circulation. The ritual begins with passengers being given and practicing using a dry skin brush. Afterward, they get a good sweat inside a steam room and then cool off in a snow grotto.

In between switches, a birch tree branch slightly flicks your back. After that, a choice of a scalp or foot massage plus a sample set of beauty products to end the ritual. You can also use the spa’s plunge pools, sauna, and snow grotto on your own.

A Variety of Excursions on the Viking Homelands Cruise

What I liked most about the “Viking Homelands” cruise was the shore excursion programming. For each day that Viking Jupiter was at port, there were a variety of escorted tours for seeing specific attractions or getting an overview of the city.

There are included city tours on foot and/or bus or boat. In other words, they ensure cultural exposure. Priced excursions encompass top-rated attractions, immersive activities or popular interests. You could see the Vasa Museum in Stockholm; feed reindeer in Finland’s Nuuksio National Park; or get a humorous glance at life under Russian rule in Tallinn.

We could also explore cities on our own, with drop-offs and pickups via a complimentary Viking shuttle from the ports to a central location. They depart every half hour.

No Issue with Russian Visa

“Viking Homelands” includes two days in St. Petersburg. Along with seeing this Russian city, this Viking cruise enables passengers to be exempt from pre-requiring a Russian visa. A no-visa entry enables cruise ship passengers to stay in the city for no longer than 72 hours; however, they have to sleep on the ship and be accompanied by a guide while on tours.

When disembarking in St. Petersburg, Viking passengers present their passports and stateroom keycards to officers at a control terminal; they glance carefully at you and then stamp your passport and then you head off on your tour.

Back to port, go through a security screening and check-in again with officers before re-boarding the ship. You pass through a corridor of souvenir stands, where you can easily pick up a Matryoshka doll or other items; along with Rubles, vendors take U.S. Dollars and Euros. St. Petersburg excursions extend to a ride on the Metro system; tickets to a folkloric performance or ballet; and tours of The Hermitage, Catherine Palace, Peterhof Palace, and Faberge Museum.

Look to the Skies

It might be possible to see the Northern Lights while sailing on Viking Jupiter, usually during fall and winter months, but get closer to the sky below deck in the Planetarium (it’s the second Viking ship to have one; so does Viking Orion).

On the upper level of The Explorers’ Lounge, The Explorers’ Dome presents three daily shows  “Hidden Universe,” “Explore” and “Experience the Aurora”. Advance reservations are a requirement; book your seat through the Viking Voyager app, along with your port excursions.

In emphasizing the definition of “destination driven-learning,” the Viking Resident Historian program has on-board experts lecturing on subjects relating to ports of call or other explorative topics. On my “Viking Homelands” cruise, the ship had an astronomer, a cultural expert and a historian discussing everything from Imperial Russia to the meaning of the cosmos. Port talks cover aspects of each port (with pre-recorded ones on TV in the staterooms) and TED Talks present a certain topic of the day.

Looking for something to do on Viking Jupiter is easy to find. Help yourself a book relating to inspiration or exploration among the library in the Viking Living Room or among bookcases throughout the ship. Day or night programming may feature competitions like travel trivia and name that tune or card games. Live music is all around. There are performances by their resident pianist in The Living Room and a guitarist at The Explorers’ Lounge. In the later hours, Patricia, Ar-Ar, and the Viking Band play top hits of the past decades at the jazz club, Torshavn.

The newsletter lists the following day’s schedule and found in the staterooms every evening. Learn more about Viking Jupiter and “Viking Homelands” here and find great savings on Viking Ocean Cruises here.

For More About the Vikings:

If you would like to learn more about Vikings check out these articles:

8 Reasons To Go On Viking Cruises is a work by Michele Herrmann. She writes about travel, arts/entertainment, culture, history, food and drink and other fun stuff for various publications and companies. Her adventures have taken her as far as Fiji, to date. Viking Cruise invited her on a press trip on the Viking Homelands Cruise. All her opinions are her own.

8 Reasons to Go on Viking Cruises – Pin for Later