French Cooking on a Barge Cruise

Are you a foodie? I am too. Some of my food travel vacations are based solely on the iconic foods and drinks that I can find in a certain country or region. For some people, food is simply a way to put energy into their bodies, but for me, it is a way to relate to people, their culture, and even their history. There is so much you can learn about a country when you look at a country’s specialty dishes.

So I was really excited when I received an invitation from European Waterways to join them on a barge cruise through the Champagne region in France. Champagne is one of the most iconic drinks and French cuisine is the mother of all cuisines. In Germany we have a saying after a delicious feast “we ate like Gods in France” and this was pretty much the theme of our barge cruise.

Lots of Time to EAT 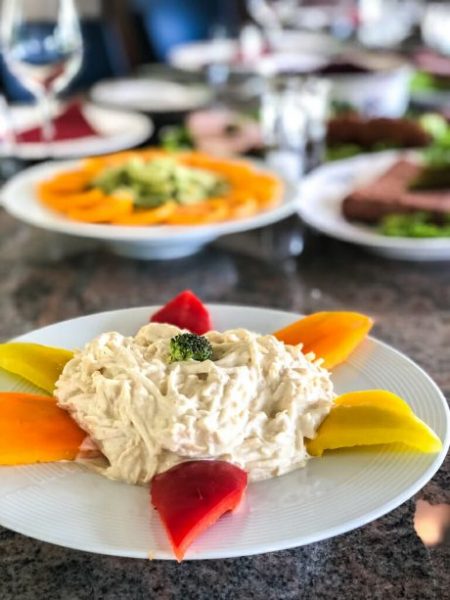 But what makes a barge cruise a perfect food travel vacation for foodies like us? Well, first of all, eating and drinking take up a lot of your waking hours on board of a barge. If you are a person who slaps a slice of turkey on toast and you devour it in 20 seconds without sitting down, a Barge cruise is probably not for you. Our lunches usually lasted 1 1/2 hours and our dinners 2+ hours.

Food Travel: Why Cruises are a Foodie Heaven

Cruises, in general, are known for good food, but here is one of the major reasons why the food on a barge cruise will always be better than on a river or ocean cruise: Number of passengers. The largest barge in the European Waterways fleet can accommodate 24 passengers.

Most river cruise ships have around 100 passengers and grand ocean liners have up to 7000 hungry mouths to feed. No matter how luxurious the cruise ship is, with those numbers, your kitchen turns from a place of ingenuity and passion into an assembly line that runs like clockwork.

Don’t get me wrong, the galley operation on a major cruise ship is nothing but awe-inspiring. Hundreds of cooks, each one responsible for one tiny little wheel in the machinery of the kitchen. Can you imagine plating 4000 salads a day, day in – day out, for 9 months straight?

On our ship, the Panache, there is space for 12 passengers and 7 crew. We were lucky and only had 7 passengers in total. 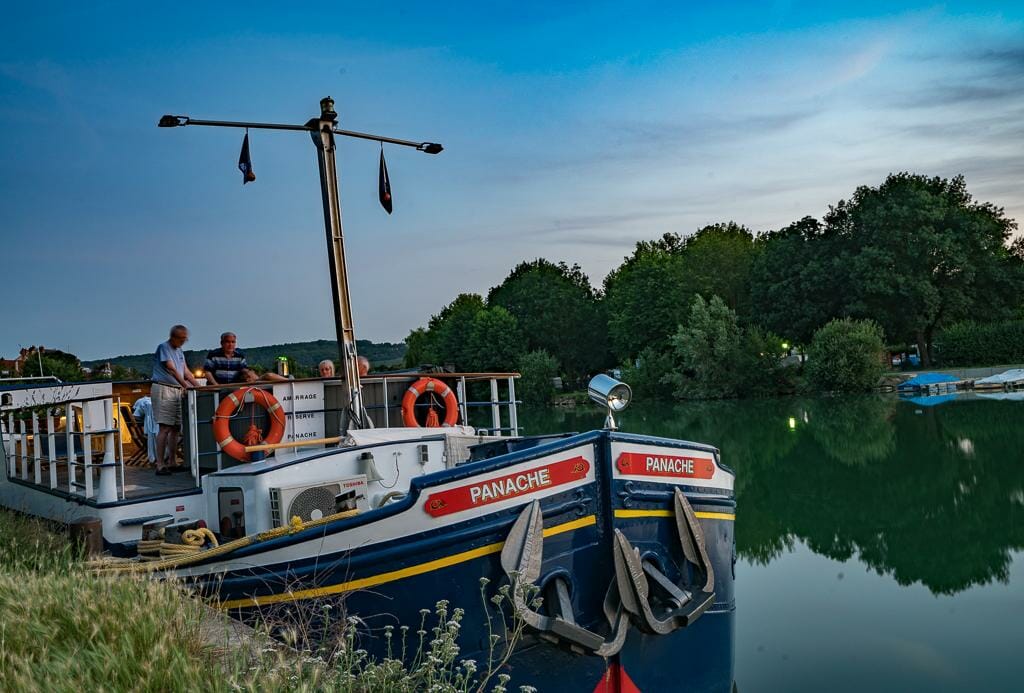 Holly, our chef, about whom you’ll hear more later, started out with a delicious breakfast. Platters with cheese and deli meats from the local markets, fresh baguette, and pastries – still warm from the oven, and bowls of ripe fruits filled the table each morning.

In addition, we could order any eggs we wanted and Holly would whip up some fresh Sauce Hollandaise to go with our poached eggs. 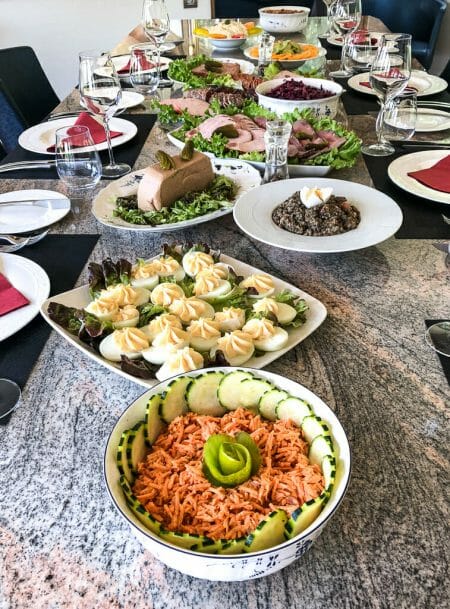 After we returned from our morning excursion, it was already time for lunch. Most days, we had an appetizer, main course and a cheese platter, accompanied with delectable French wines that were introduced to us by our stewards Max and Cat, who would put any Sommelier to shame with their knowledge about the wines.

My favorite though was the Farmhouse-style buffet that Holly put up one day for us. The table was already overflowing with bowls and platters, but more and more kept appearing. I stopped counting at 15, I think. There were bowls of colorful blanched carrots, tangy French lentil salad, humongous bricks of pate, creamy deviled eggs and crusty French bread. One thing was more delicious than the next and after we finished, it looked like us 7 passengers had barely made a dent in the array of food.

Holly told us that this was the regular lunch at his grandma’s house. His grandparents owned a farm and during the summer, he would help his grandma make lunch for the family as well as up to 15 farm workers who helped with the harvest. Spending his time in the kitchen with his grandma is what made Holly fall in love with cooking and planted the seed to become a chef. But more about that later. 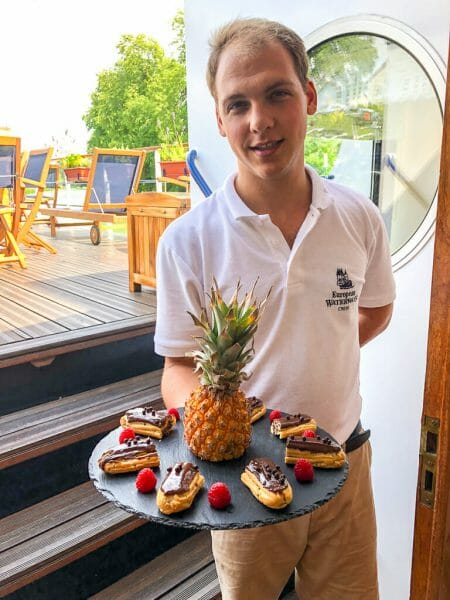 In between, we had snacks like eclairs, quenched our thirst on homemade lemonades, and enjoyed copious amounts of the local drink of choice – Champagne.

Speaking of Champagne, most foodies are also connoisseurs of wines, craft beers, and distills. During our barge cruise, we had free access to a fully stocked bar that not only included the top-shelf favorites, but also some local gems.

During lunch and dinner, we sampled amazing red and white wines – French ones, obviously. They were introduced to us by the crew members Max and Cat, both very knowledgeable about the various French wine regions, grapes, and winemakers.

Cheese is a part of life in France. No meal – except for breakfast maybe – is complete without the milky delicacy. Max and Cat not only knew a thing or two about the wines we had but also had a depth of knowledge about French cheeses. They shared some interesting tidbits about the production process, interesting traditions, and anecdotes as we indulged in delectable varieties from Morbier to Roquefort for lunch and dinner. Like the sweet story that Cat shared with us about how Roquefort cheese came to be: 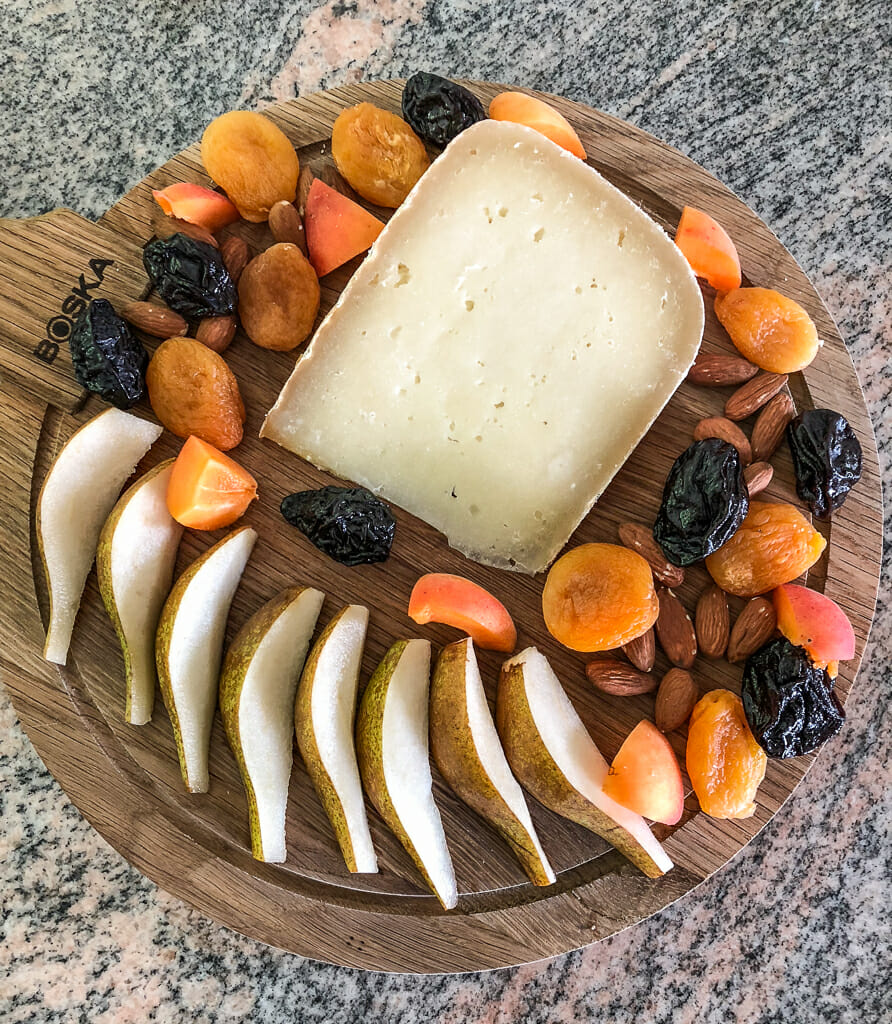 On a beautiful spring day, a shepherd in the South of France took a break for lunch and ate his cheese sandwich in a cave overlooking the valley of Roquefort. As he sat munching on his sandwich, he saw a beautiful girl walk by on the footpath nearby. Lovestruck, he dropped his sandwich and followed the girl.

A few months later, the same shepherd was herding his flock of sheep on the same hillside, when dark clouds covered the sky. Thunder, lightning, and gushing rain forced the shepherd to take shelter in a cave. Like a miserable heap, he sat there soaking wet, shivering and hungry, when his eyes spotted something: His sandwich! Driven by his growling stomach, he took a bite and the rest, as they say, is history.

Our 4-course dinner was nothing but a highlight every day. Whether he served traditional French dishes or exotic innovations, Chef Holly made our taste buds dance at night. We indulged in fresh snails drenched in garlicky butter, pineapple with Madras-curry sauce, and other mouthwatering recipes. In fact, when we went to a highly praised Michelin Star restaurant in Epernay, we all agreed that we enjoyed Holly’s food more. 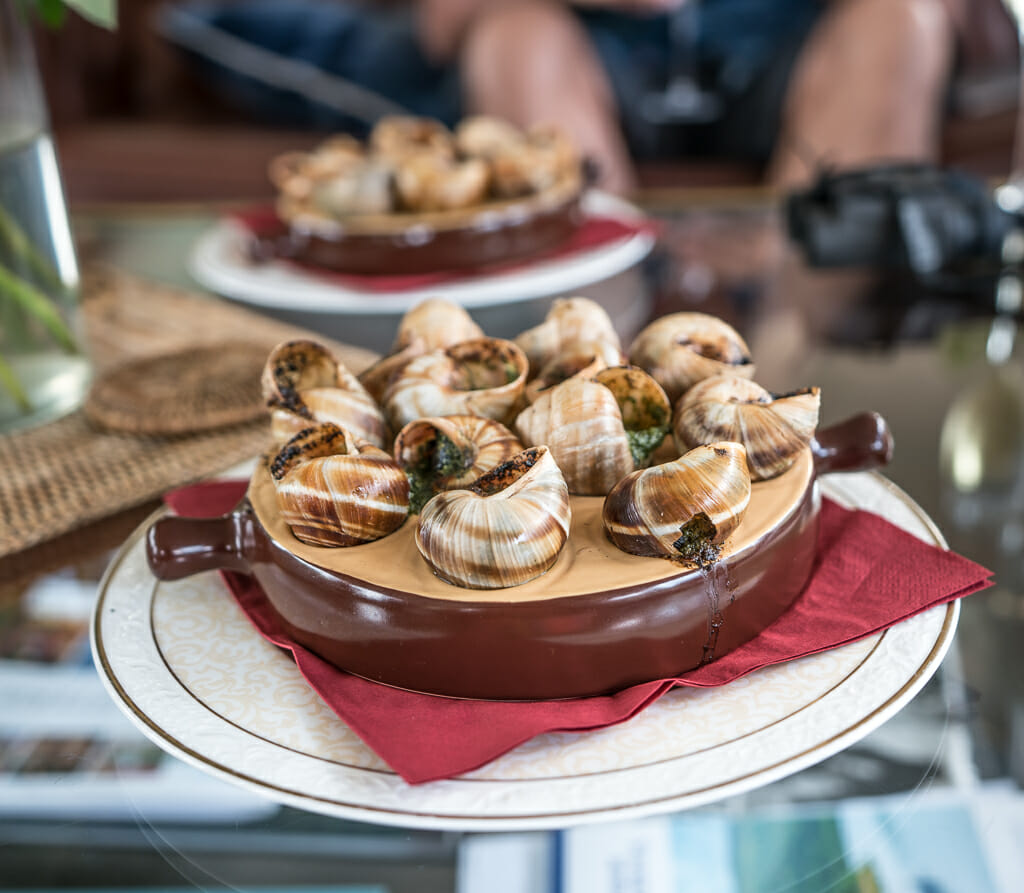 So it didn’t surprise us, when we later learned that Holly used to run not one, but two Michelin starred restaurants himself, before becoming a Barge Cruise Chef. This man has talent. He has passion and you can taste that in his food. But what I like most about his cooking is that it is not pretentious. His goal is to use the best ingredients he can find and make them into the tastiest food he possibly can. It is not about him, it is about the food and that makes it so approachable and enjoyable. 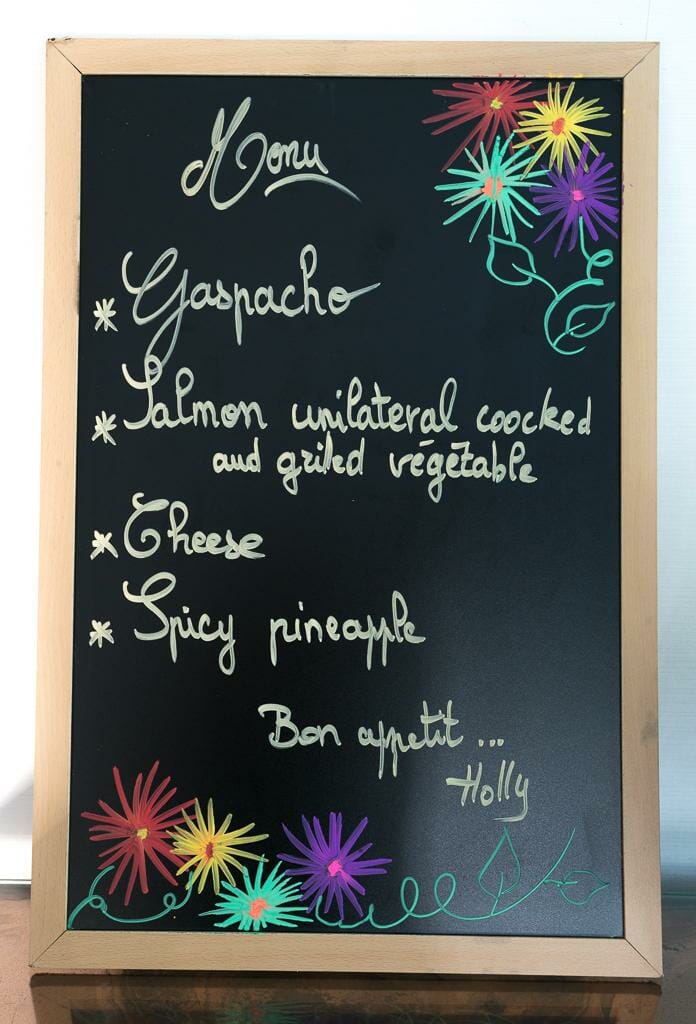 I interviewed Holly in his barge kitchen and he told me about his wife and kids at home and that the only negative thing about being a Barge Cruise Chef is that he doesn’t see them for such long periods during the summer. When I asked him, what his go-to meal is, that he always has to prepare for his family as soon as he gets home, his face lit up and with a chuckle, he answered: “Chicken McNuggets – but homemade!”

Mastering the Art of French Cooking with Chef Holly

On our last day on the ship, Holly invited us into his kitchen and gave us a little cooking demonstration. We made some Gougeres, savory cream puffs minus the cream.

He also asked us to put down our favorite dishes of the week and a few days later, he sent us the recipes. More proof that he cares about sharing the joy of eating good food and a perfect souvenir from your food travel vacation, don’t you think? 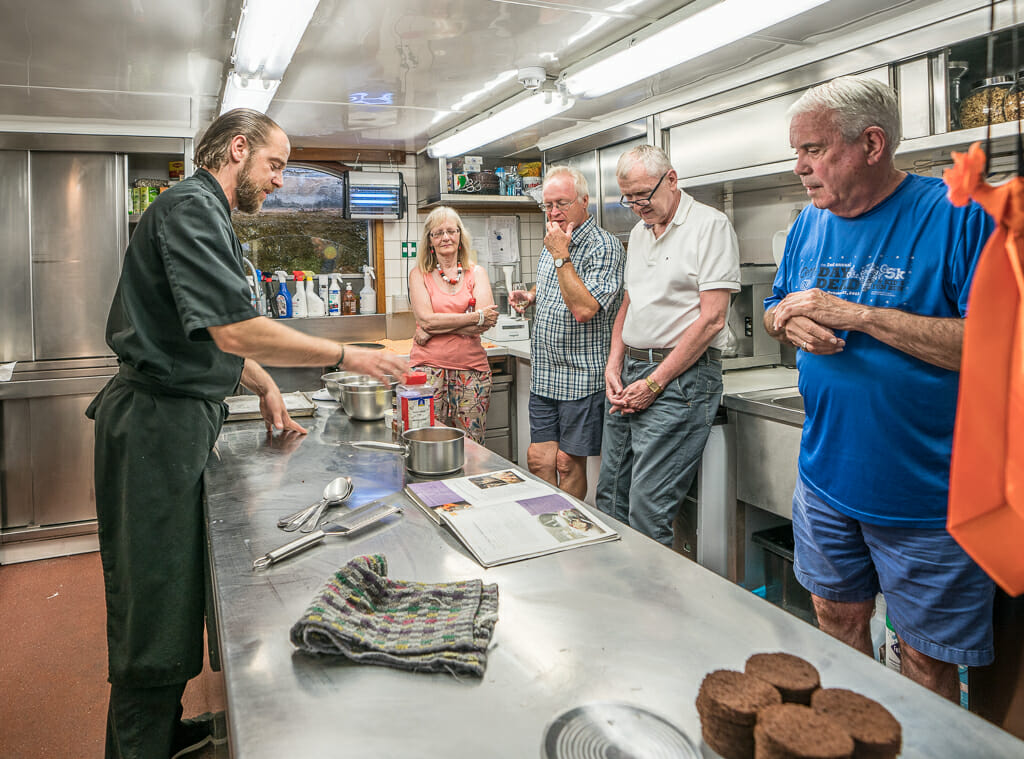 Pin for Later: Food Travel Vacation on a Barge Cruise in France 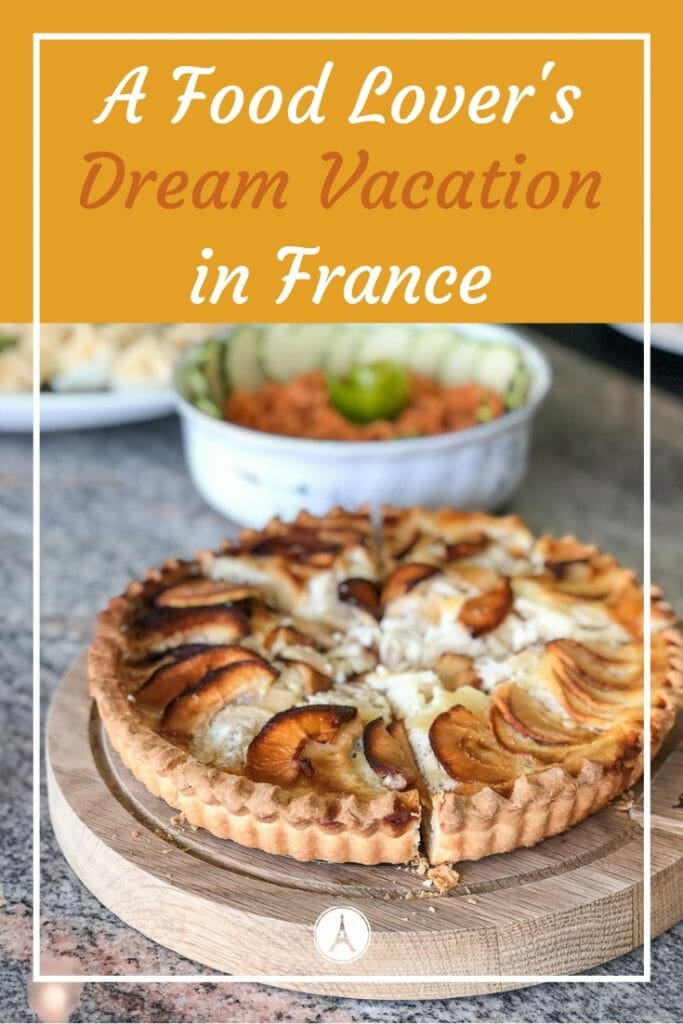 As a food traveler, I would love this cruise. From exploring the Champagne region to tasting French cheeses to that four-course dinner, I'd be living the dream!

What a great article. I didn’t realize there was such a small number of passengers on this type of cruise. Sounds very appealing. Your description of the food made me hungry. Sounds like it was a good thing you had excursions to participate in to walk off some of the food. I now have a barge cruise on my to do list.

I went through your article and it’s totally awesome. I am searching for a blog about french food, and my search ends with your blog. Keep on updating your blog with such awesome information. Thanks

Awesome blog. I love French Food. Thanks for sharing.